The English Patient by Michael Ondaatje (Bloomsbury Publishing) is the worthy winner of the Golden Man Booker Prize, award-ed to the best of the 51 prize winners since the inception of the prize. From the longlist of 51 previous winners a shortlist of 5 was drawn up by a panel of judges. The English Patient, celebrated as a brilliant novel and as a critically acclaimed film, was selected the winner after a public vote on the Man Booker website.

Here are two distinguished writers whose latest novels celebrate the poets of their own native countries: the Uzbeki author Hamid Ismailov, and 2012 Booker shortlisted Jeet Thayil from India.

Readers of this column will remember Ismailov’s stark and stunningly beautiful The Dead Lake, portraying the tragic legacy of irresponsible Soviet nuclear testing, a work which ranks him among the most powerful social critics of our time.

In The Devil’s Dance, Ismailov takes us back to pre-Glasnost Soviet Russia, a country of which Uzbekistan was a particularly hapless part. Ismailov’s protagonist, the famous Uzbek writer and poet Abdulla Qodiriy is imprisoned for sedition, thrown into jail, with other celebrated Uzbeki literary luminaries, under the infamous Stalinist regime, without trial and with no reason—a common occurrence in all dictatorial regimes worldwide. Hamid Ismailov uses this imprisonment as a narrative platform, treating us to a rare and significant exploration of the writings and writers of Uzbekistan, past and present, poetry and prose, painting a huge and colourful canvas of the literary voices of Central Asian culture. This unfamiliar milieu lends The Devil’s Dance the glamour of the exotic juxtaposed with the horrors of prison life—underlining Ismailov’s virtuosity yet again.

We thank once again Prof Donald Rayfield of Queen Mary University, London, for giving us access to so much literary excellence via this accomplished translation.

Jeet Thayil’s scope in The Book Of Chocolate Saints is a far-reaching fictional portrayal of the poets and writers of modern India, the literary realm that my good friend Prof Gerhard Stilz of Tubingen University had named ‘Indo Anglian Literature’ i.e. Indian writing in English.

Thayil, the scion of a well-known literary family from Kerala presents a pantheon of modern Indian poets—his ‘chocolate saints’—many of whom were my personal friends in my Bombay years. Thayil’s fictional protagonist is the poet and artist Francis Newton Xavier, member of the fin de siècle group known as the Bombay Poets, whose career takes him from Mumbai to Manhattan and back. Thayil dedicates The Book Of Chocolate Saints to Dom Moraes, one of the best known Bombay Poets, who, along with my friends Kamala Das, Gieve Patel and Nissim Ezekiel inter alia, plays a role in this complex, erudite and compelling novel.

Though Thayil’s narrative spans the USA, he writes primarily about Mumbai, my home town, with as much insight as his literary hero Sir Salman Rushdie—Thayil is, however, more accessible and not prone to the insider Mumbai jokes and gossip with which Rushdie bewildered his readers. 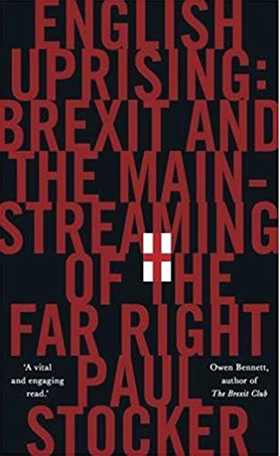 English Uprising: Brexit And The Mainstreaming Of The Far Right by Dr Paul Stocker (Melville House £14.99)

Once again, I breach the unwritten understanding that this column is dedicated to examining works of contemporary fiction of high literary value. But the two academic publications that I now present for your consideration are controversial, of great topical interest and well worth our attention.

Dr Paul Stocker’s English Uprising was written in his professional capacity as part of the Centre for Fascist, Anti-Fascist and Post Fascist Studies—he has a doctorate in, and has published research on, the history of far right and fascist movements in Britain.

English Uprising traces the development of racism in England. Dr Stocker focusses on anti-immigrant attitudes as a prime cause for the pro-Brexit vote. His premise is that far-right fascism and hostility to immigration has always been a latent constituent of mainstream English consciousness—culminating in an anti-European vote.

Fortunately, Dr Stocker has used the word ‘English’ in the title of his book: his basic premise simply does not hold true in Wales and Cornwall, the two areas that voted most solidly to leave. These two areas, designated Objective One (now Convergence Area) economies, the most deprived and under-developed parts of Britain, which received the largest amounts of European funding, both have very low immigration figures and we would be hard put to even encounter immigrants, European and otherwise, in Swansea and West Wales, apart from our beloved Chinese and Bangladeshi restaurateurs.

The reason we voted heavily to leave the European Union had absolutely nothing to do with latent fascism or racist extremism—most of us have never seen or met an illegal immigrant. Let’s be clear about it: We voted to leave because we have had the closest dealings with EU bureaucracy and the daily harassment of EU directives and the resulting mountain of paperwork. We understand what a relief it is soon to be, to no longer be at the receiving end of questionable directives from Brussels and its apparatchiks, and celebrate the end of the fisheries and agricultural policy.

Sorry, Dr Stocker. Absolutely nothing to do with immigrants. We simply don’t have many. No Welsh citizen wants to be included in Stocker’s analysis of this seeming tide of far-right fascism. Small wonder that most Welsh people hate to be mistaken for English.

SOME COMMENTS—-NOTHING IS AS CLEAR AS IT SEEMS…

A Brexit lawyer from Manchester makes the following observation: “Brexit turned on the Birmingham vote – all other big cities (Cardiff, London, Manchester, Liverpool, Newcastle and Leicester) voted to remain. When Birmingham went Brexit so did the country.

“The “main” Brexiteers in Birmingham were the Asian population there. This works against the “neo fascist” theory put forward, since these chaps are supposed to be perennial victims rather than propagators of fascism.”

A top executive, born and bred in Wales commented:

“Re. Wales and Cornwall – Wales is a country, Cornwall is a county in England, so the ‘English’ part of the title does apply there, doesn’t it?

“On a point of order, I think possibly even fewer people will have been at the sharp end of EU paperwork than will have met an immigrant, so that premise for choosing to leave may be quite alien to most readers (except business applicants and bureaucrats who have benefitted from EU money).

“Immigration was given as a reason by more people than you’d think in Wales for their leave vote (as well as the sheer lunacy of ‘sticking it to Cameron’), not because of direct experience but because so many read the tabloids and perceived a non-existent ‘threat’. I have no quantitative evidence, obviously, but I really do think it was a profound subliminal influence. I did actually hear it from the mouth of a Daily Mail reader in Porthcawl, of all places, so I asked him to name an immigrant he’d met or say where he’d seen one taking a Welsh person’s job. He couldn’t, obviously.” 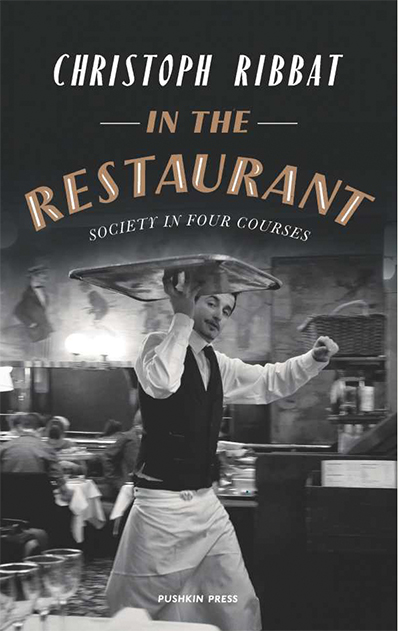 In The Restaurant—Society In Four Courses by Prof Christoph Ribbat Translated from the German by Jamie Searle Romanelli (Pushkin Press £16.99)

Professor Christoph Ribbat turns the focus to matters culinary with his academic analysis of the food trade entitled In The Restaurant. This fascinating study is crammed full of gossipy historical anecdotes and tall tales, all told with a cool academic detachment. In addition, Prof Ribbat writes of the luminaries of the culinary world—- the great continental chefs, the great international restaurants, and, above all, of great food writers. In The Restaurant is veritably, as the title promises, a depiction of society in four courses.

The examining of excellence in food writing is of great interest to me, as an award-winning food writer myself. It is heartening to celebrate the best of culinary criticism with Prof Ribbat, particularly because it is at its lowest ebb at present thanks to the nightmare that is social media. Today, every member of the illiterati writes food blogs or reviews for Trip Advisor, plumbing journalistic depths in an increasingly annoying and subversive manner.

Nor is the ubiquitous writer of restaurant reviews in national and regional publications spared. Prof Ribbat urges them to try to understand that a restaurant reviewer must above all be a ‘Zeitkritik,’ critically analysing food and restaurant with reference to the parameters of contemporary issues— including a range of historical, sociological, geographical and cultural influences on the food produced and presented. In Prof Ribbat’s view, a restaurant review must be more than a recitation of the items on the menu, accompanied by ill-informed comments, culinary cliches and cursory descriptions of the food itself.

The best food writing must examine the ‘why’ of food with as much attention as the ‘what’ and the ‘where’. All food, all restaurants and all chefs are the end result of the totality of their past and present sociological environment, and food writing can only provide a valuable comment if the writer is sophisticated enough to be able to meet these criteria.

Perhaps the best of food writers in the UK today is Nicholas Lander of the Financial Times—his restaurant reviews are exemplary and should be carefully studied by all the hacks who attempt culinary comment.