From nightlife to wildlife, my short visit to South Africa had a little taste of everything. One moment I was observing the clash of cultures in a small suburb named Muizenberg. And then I found myself driving through an African safari stretching out the jeep to see the animals. 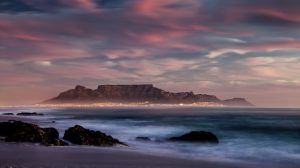 The first thing you notice when you step into Cape Town is the iconic Table Mountain. Reaching 3,558 feet, its presence is imposing and certainly not something you can ignore. Many families travelling with children take the cable car up the mountain for R285 (£16.47) per head—a small price to pay for convenience. However, walking up it is free and encouraged. As we stumbled along the India Venster trail, I instantly thought of images of paradise. It’s not far from The Bay’s description of Tanzania’s Ngorongoro Crater, “This is biblical, and the words ‘Garden of Eden’ spring to mind.”

It was a technical climb which certainly required some of my bouldering experience. Reaching the mountain’s summit was a dramatic experience. There was a low blanket of clouds to welcome us. I watched as it slowly drifted off to reveal stunning views of Cape Town and the Atlantic Ocean. Before the descent, a small furry animal appeared from the crevices of the plateau which I later found out to be a rock hyrax. I said my goodbyes to it and the mountain, and came back the next day to catch the sunrise. 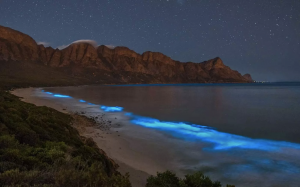 The next night, we took to the beach at False Bay. This place is magical due to the Phytoplankton that light up the shore. It was cold but I wanted to see it for myself. I was falling asleep—tired from exploring Cape Town in the day—but my companion nudged me and pointed to streaks of blue light in the water. It was almost as if these microscopic organisms were playing in the water and chasing the crashing waves. 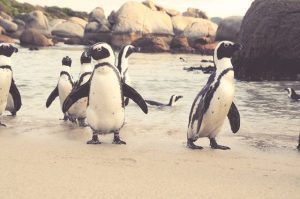 As amazing as that was, Cape Town’s beaches are fascinating. When you go to Boulders Beach and gaze over the boardwalk, you will see colonies of African penguins. They might be adorable but there’s nothing nice about their status in the world right now. The African penguin population is shrinking by 2% annually, and one of the main reasons is that their habitat is being disrupted. 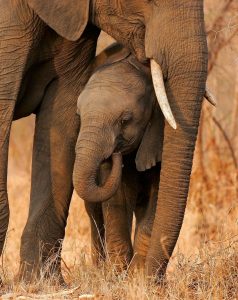 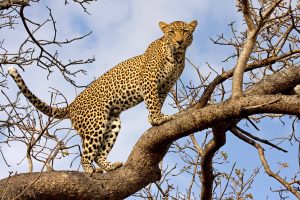 After a busy stay in Cape Town, it was finally time to see the wilderness. We took a short plane ride and navigated pothole-ridden roads for six hours. We then arrived at Kruger National Park, one of Africa’s largest game reserves. There was only one order of business when we arrived – to see the Big Five or as Trip Savvy calls them, ‘Safari Royalty’. The Big Five include the African lion, African leopard, African elephant, Cape buffalo, and rhinoceros. Our driver was named Arno, an Afrikaans name for ‘eagle’. I didn’t see any eagles, but I did see four out of the Big Five. I watched in awe as elephants pulled on branches with their trunks. A leopard walked through the grass and another stood tall on a fallen tree trunk. I watched a herd of buffalos stomping away as we approached and observed a pride of lions lazing around in the sun.

Unfortunately, we didn’t spot any rhinos which was isn’t surprising considering that both the black and white rhinos are at risk of extinction. Despite my awe over the safari experience, I felt a pang of sadness that I may never see a rhino in my lifetime.

Socio-economic problems are still rampant in the country, and they shouldn’t be taken lightly. While my experience in Cape Town was bordering on luxury travel, I learned that locals are not quite as lucky. Save the Children reports that 40% of South Africa’s population live on less than R16 (£0.92) a day. It makes me think of how many families I could have fed on what I thought was a measly budget to explore South Africa. While my holiday is over, it’s not too late to be more mindful of the ongoing issues in South Africa. And there are plenty of initiatives and charities that support locals in getting enough food to live on, helping improve the educational system and much more than you can donate to.

I’m endlessly grateful for my short stay in South Africa. I would jump at another chance to visit the country in a heartbeat. But next time, I’ll be coming with a renewed perspective and look at volunteer work while I am there.