THE HOUSE WITH A CLOCK IN ITS WALLS

October and Hallowe’en are traditionally the time when the horror genre films make an appearance, and this month is no different. Emlyn’s review this month features a PG rated film. PG or Parental Guidance means that it is suitable for general viewing, but some scenes may be unsuitable for young children. A PG film should not unsettle a child aged around eight or older. Unaccompanied children of any age may watch, but parents are advised to consider whether the content may upset younger, or more sensitive, children.

When scanning the production information for The House With A Clock In Its Walls, you’d be forgiven for doing a double take. It’s based on the beloved novel and comes to us from Amblin Entertainment, Steven Spielberg’s famous company that brought us classics like The Goonies and Gremlins. It stars Jack Black and Cate Blanchett, both big names who aren’t exactly strangers to kid-friendly fare. And then you notice that it’s directed by Eli Roth, best known for splattery, extremely violent horror like Cabin Fever and Hostel. Eli Roth, directing a kids’ film? But it turns out to work much better than you might expect.

Our hero is Lewis Barnavelt, a precocious 10-year-old who’s had to move in with his slightly odd uncle Jonathan (Black) after the death of his parents. He quickly realises that something very weird is afoot in the house, and it’s not long before he discovers that Jonathan is a warlock. Unsurprisingly, he’s keen to learn magic himself, and equally unsurprisingly, it doesn’t go entirely well – especially with the spectre of Jonathan’s dead former partner looming over them.

Whatever else might be said about the filmography of Eli Roth, one word that isn’t often applied is “fun”. When it comes to stuff like The Green Inferno, “gruelling” and “nightmarish” spring more readily to mind (which can be good or bad depending on your taste for cannibal horror), and with his recent Death Wish remake, we’re looking towards phrases like “colossally ill-advised”. The House… however, is fun. Really fun, in fact. Far from perfect, to be sure, but it is a very good time at the movies for all its faults – it turns out that this sort of thing actually fits Roth rather well. It certainly wouldn’t be the first time a director having to rein himself in a bit worked in the film’s favour. 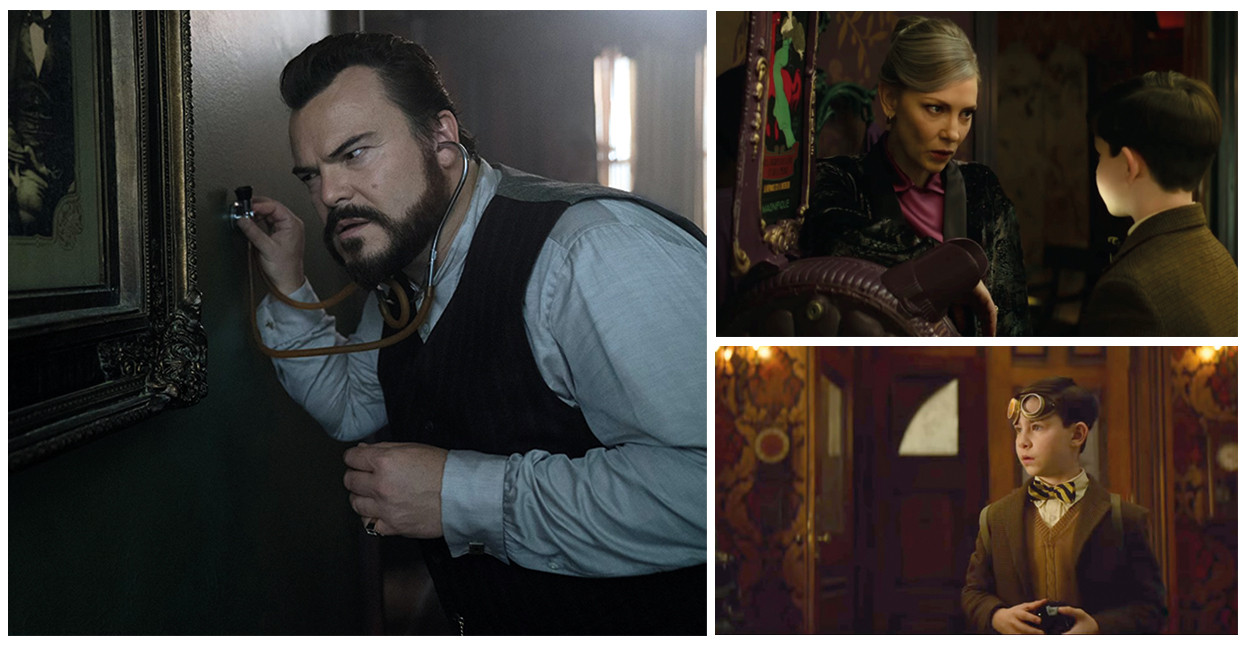 It’s spooky but never truly scary, more like a ghost train or a haunted house than this year’s more genuinely frightening pictures like Hereditary. It’s the kind of thing where a laugh almost always follows a scare, and could well be an excellent way for horror-loving parents to introduce their children to the genre without running the risk of scarring them for life. Not all of the jokes land, (a recurring gag about a griffin’s bathroom habits is something of a dud) but more than enough do and you’re never looking at too long a stretch without either something amusing or scary happening.

A lot of the humour is thanks to Black and Blanchett, who plays Jonathan’s witch neighbour, and both of them give every impression that they’re having a great time getting to kick back, be weird and snipe at each other to very entertaining effect. Owen Vaccaro turns in strong work as Lewis as well, thoroughly convincing as a lonely child trying to be someone he’s not, to fit in better at school. And Kyle MacLachlan makes the most of comparatively little screen time by chewing all the scenery he can as the villain; everyone here seems to be enjoying themselves, and the mood is infectious.

There are stumbles: considering that the message is all about embracing your weirdness and being unafraid to be who you really are, it’s a shame that the third act is so conventional in its CGI-laden save-the-world shenanigans with a literal ticking clock; and the tone is so geared towards fun that some of the more dramatic moments don’t land as well as they should. They’re relatively minor blips, though, and don’t detract too much from the many things the film gets right.

There’s not a great deal else to be said, although it would be a shame not to note the superb production design, which makes the titular House feel as lived-in, mystical and creepy as it needs to for the story to work. It’s perhaps not a classic, but it is a thoroughly enjoyable spook-filled family adventure. Sometimes, that’s all you need – a fun Halloween movie that doesn’t feature masked killers and torrents of blood that wants to entertain you rather than truly scare you. With the recent crop of genuinely brilliant and terrifying horror films we’ve been getting lately, that’s maybe not such a bad thing!