Munich, I’ll admit it wasn’t top of our “let’s go there on holiday this year list”. We’d also read that Bavaria’s capital did have the ability to leave a weary traveller feeling a little cold. The truth is we actually fancied Austria.

Here we had a problem. We couldn’t find any direct flights to either Innsbruck or Salzburg – we’d been to Vienna before – from either Manchester, Liverpool or Birmingham (all within two hours of where we live, and much prefer-able to the four hour plus schlep to Heathrow), and besides, we fancied The Alps, The Tirol, Mozart, and the Milka Chocolate type of Austria. So, after a quick look at the atlas, and a really good look at the Deutsch Bahn website, Munich direct from Brum it was, with the lovely Lufthansa.

After a flight-time of a little over 2 hours, plus a train ride from the arrivals gate to the baggage reclaim hall – Munich Airport is vast – we then faced another 40 minute train ride, S-Bahn this time, and then a 15 minute U-Bahn ride (that’s what the German’s call the Tube), before arriving at our basecamp for our week’s exploration of Bavaria: the K+K am Harras. Checked-in, suitcases opened, and showers taken we hit the U-Bahn again. Destination Goetheplatz.

My second-cousin Tom lives and works in Munich – we Birds are a world-wide brand y‘know; branches in Germany, Sweden, Dubai, Australia, all over the U.S.A, Canada…I digress. Anyway, Tom’s knowledge of Munich proved invaluable. As did his choice of Vietnamese restaurant: Nam Gaio 31, at Maistraße 31; well worth seeking out.

“Wednesday’s a Bank Holiday” said Tom “It’s Assumption Day, and they take it very seriously here in the Catholic Bavaria. Everything will be shut”.

The name Munich is derived from the term Munichen, meaning “by the monks” incidentally.

Personally I’ve always been of the opinion that all religions are based on some pretty almighty assumptions. What’s all the fuss about? I thought. Nevertheless Munich’s planned mid-week “festivities” helped us decide Wednesday would be our Stuttgart day.

After thunderstorms on our first night Tuesday dawned bright, thus providing us with the perfect day for a proper nose around the city the locals call Munchen. 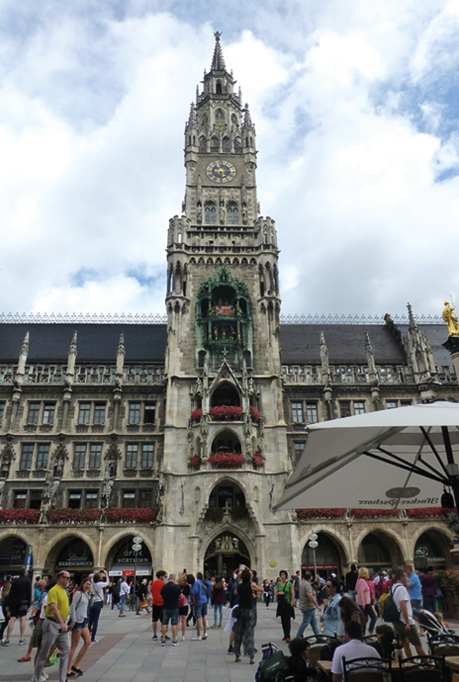 As the third largest city in Germany (population approx. 1.5 million) its epicentre appears to be Marienplatz (top main pic) in the old town, or   altstadt, where the Neues Rathaus (right) – that’s New Town Hall – and 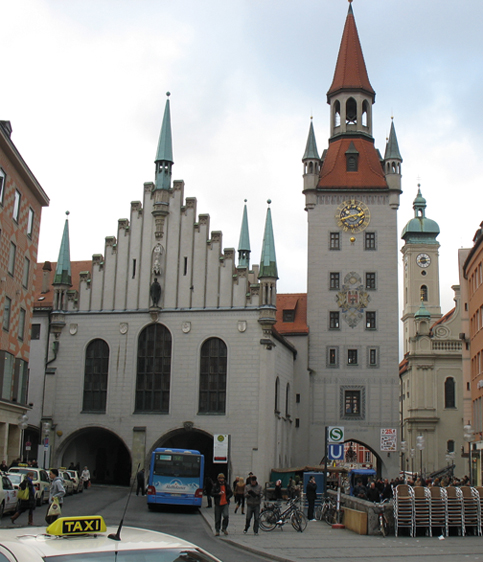 the Old Town Hall – the Alte Rathaus (left) – dominate what feels like the main square, You’ll find an abundance of both tourists, and lederhosen-clad (I kid you not) Munichers alike here, all going about their daily sightseeing or business, as well as many of Munich’s numerous brauhauses just a street or two away. This is after all Oktoberfest territory – Munich’s internationally renowned beer festival. 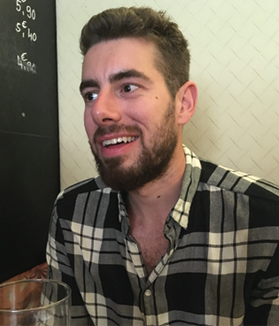 Once free of the rucksack carrying and bierstein banging brigade though, to us at least Munich felt quieter, and maybe perhaps a bit smaller than we initially expected. Tom (left) did say you could cycle across it in 20 minutes. 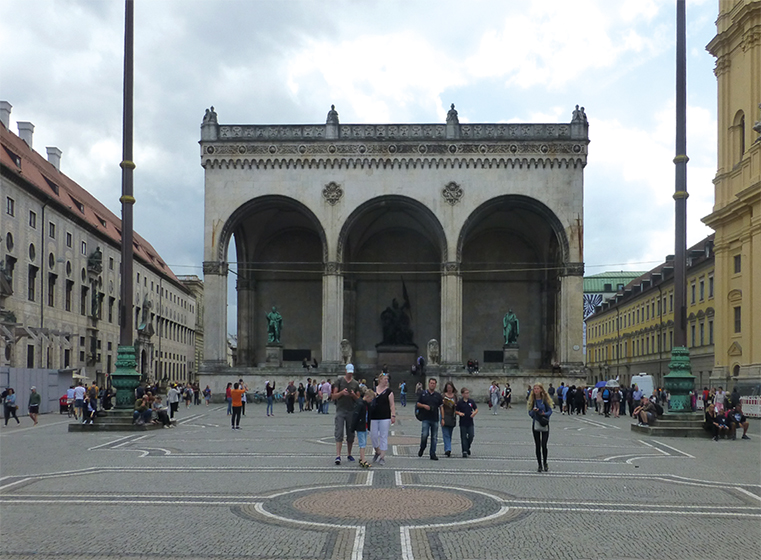 As such it’s just a short walk to Odeonsplatz (right) where mid-20th century history took a very dark turn (We won’t dwell on that here – look it up). Today the large square, like all of Munich’s many open spaces, feels relaxed and friendly. The Englischer Garten (I’ll let you do your own translation of that one), the largest park in Europe, or so I’m told, that lies northwest of here also provides a welcome oasis of calm for travellers, office workers on their lunchbreak, and the odd obligatory tramp alike. It’s also in this area that you’ll find the Munich Residenz, a museum complex housed in a previously royal residence, the university, and the Haus der Kunst, Munich’s gallery of contemporary art.

My interests however lie in another form of mid-century-modern art and sculpture. So it’s back on the U-Bahn, after a bowl of goulash soup. Destination: Olympiazentrum (below).

After Bayern Munich, beer halls, and threatening attempts at World domination by moustachioed maniacs, if Munich’s famous for anything, it’s probably the Olympic summer games of 1972, and of course, BMW. The sites of both stand virtually cheek-by-jowl towards the north and just a short underground ride away, from the centre of town. To be honest the Olympic Park looks a bit dishevelled these days; it’s currently undergoing a pretty extensive refurbishment program, but it still packs plenty of visitors around its boating lake on a warm summer’s afternoon. 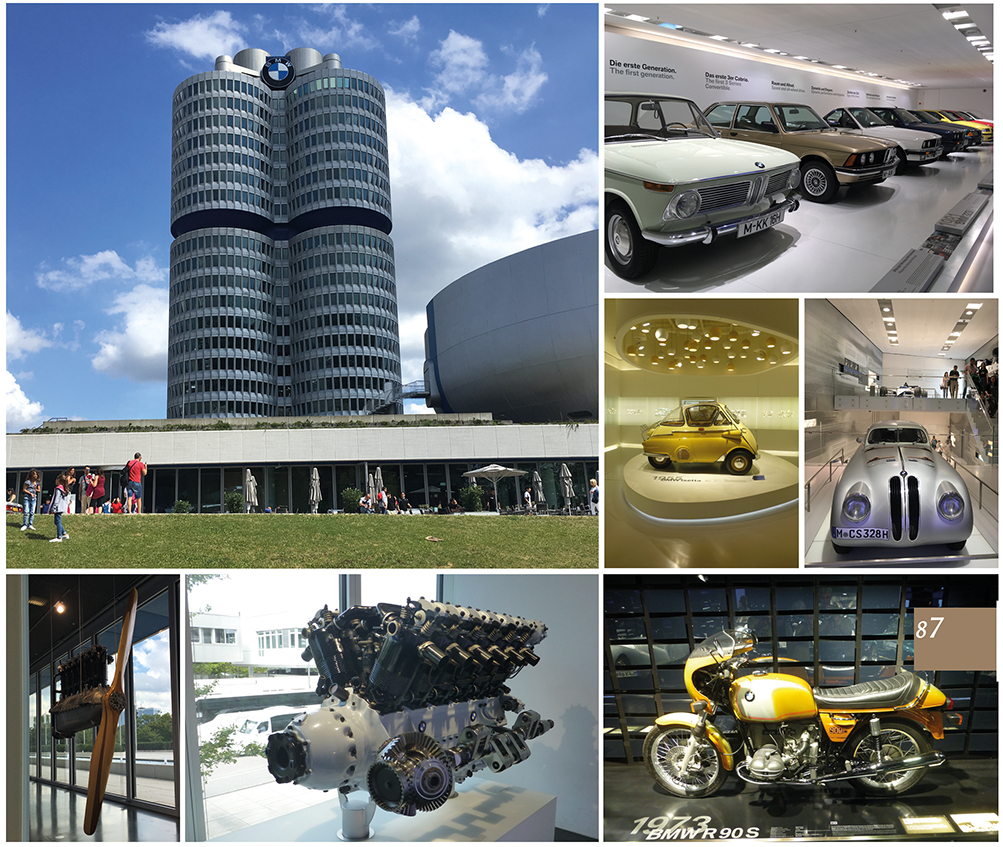 BMW’s museum (left) on the other hand couldn’t be more modern if it tried. Motorcycles, cars and vans of all eras and of course aero-engines – rumour has it the BMW badge represents a propeller turning against a blue-sky background – fill a four-floor hall that should win as many awards for its content as it should for its architecture. No wonder this place constantly tops Munich’s must see-tourist attractions list. Even if you’ve only a passing interest in all-things mechanical the 8 euro entrance fee is worth every single cent. 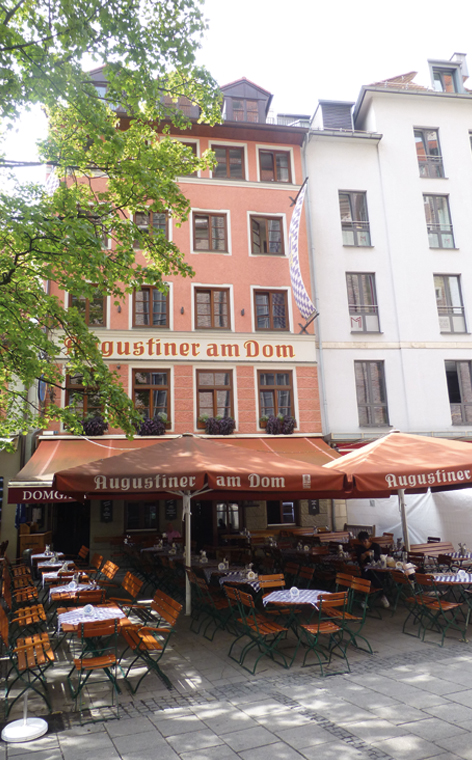 After far too many engines from which to pick a favourite it was time for us to refuel. I had a hankering for Wiener schnitzel and apfel strudel, and Becky (Mrs Bird) fancied a beer. Both thankfully were in plentiful supply at the Augustiner am Dom (left) on Frauenplatz – so too were the lederhosen.

Wednesday, and Tom was right. Munich’s streets seemed deserted, as were the the S-Bahn and U-Bahn which were running reduced services. Everyone had gone out of town, or at least was in the process of doing so judging by the amount of bicycles and camping gear we saw at the station. Our excursion was however decidedly more urban.

If Munich’s most famous export is BMW, our next destination, Stuttgart or more accurately its suburb Zuffenhausen will also be instantly recognisable to those with a penchant for the petrol-powered. After a 2¼ hour ride – Munich’s trains are superbly and stereotypically clean and punctual – we were in air-cooled heaven. Porscheplatz; somewhere I’ve wanted to see for almost as long as I can remember. 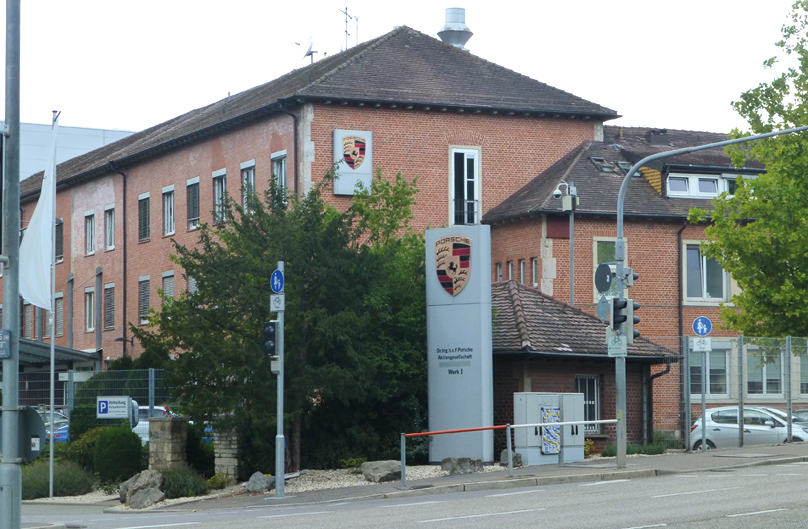 The old factory gates that mark the entrance (right) to where founder Dr Ferdinand Porsche’s grandson, Butzi, designed the now iconic Porsche 911 are almost hidden by what is now a huge manufacturing complex. But I did my research, I knew where to find them. A few snaps before the security guard politely told me such things are verboten – the new 2019 911 is in there somewhere – and I was a happy man. I then retreated to the factory museum (pics below) and happily soaked up seventy years of what to me is engineering genius, not to mention some very high octane coffee in the café that overlooks the museum’s restoration workshops. 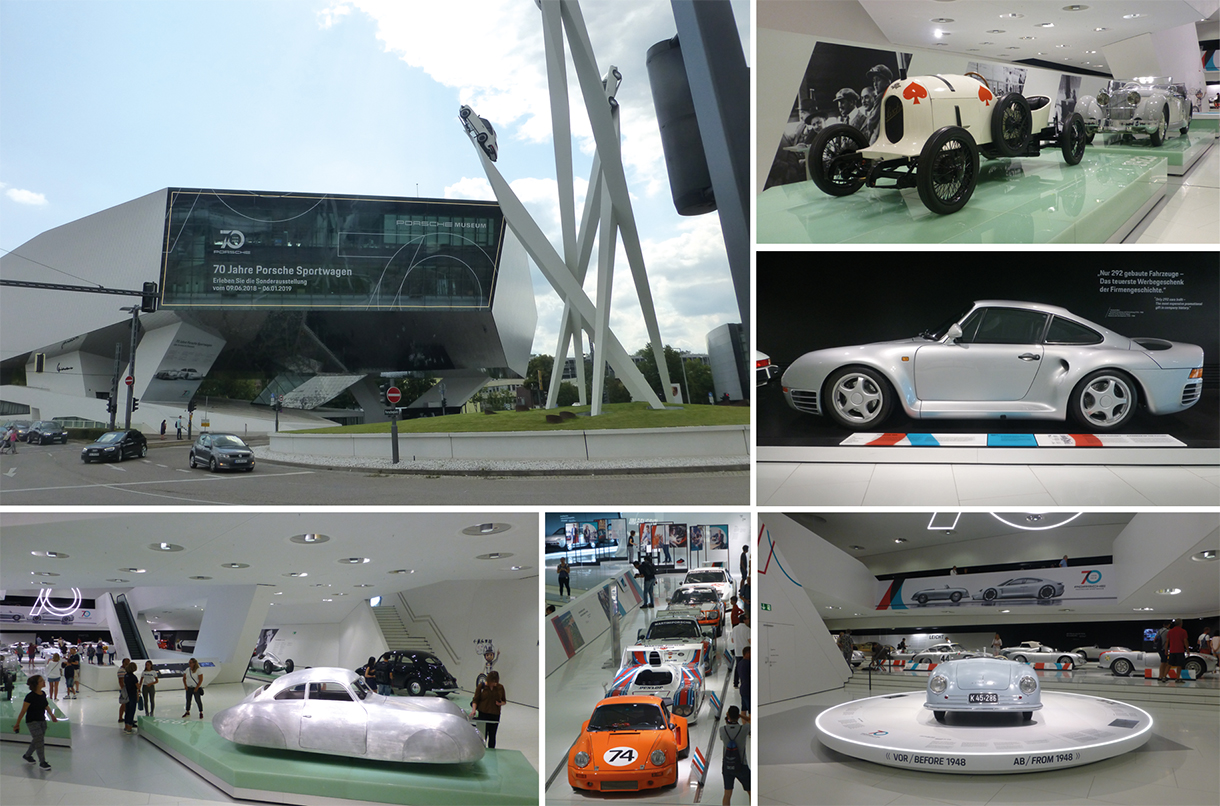 I’d have liked to have seen a few more original drawings to be honest, maybe something with a signature on. Oh well… clearly the cars here are meant to speak for themselves. Hopefully mine and Becky’s photos do the same.

Stuttgart is definitely not the prettiest of cities. So after a quick wander around we caught the train back to Munich, indulged ourselves with cheeseburgers in the Hard Rock café, which despite being half-empty still had a half-hour wait for tables and made our plans for Thursday. 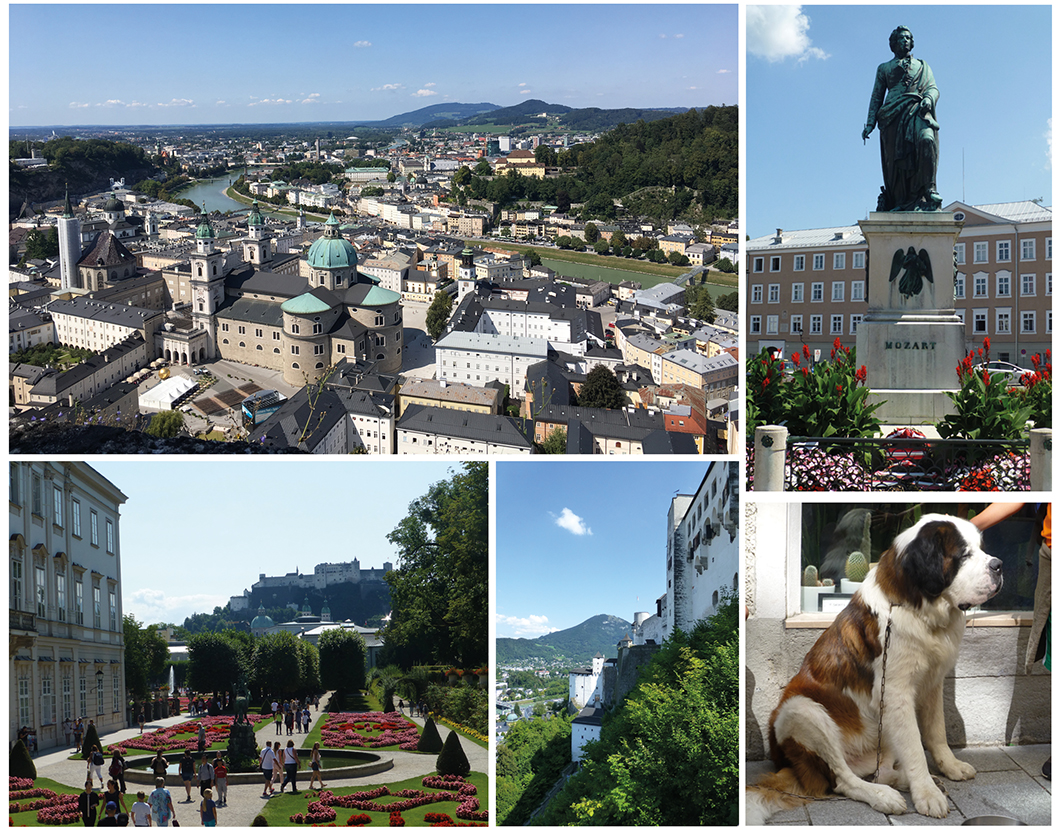 Another day, another train. Southbound this time, to Salzburg (pics left), a city that’s as picture postcard-pretty as Stuttgart isn’t. Just a stone’s throw from the Eastern Alps, Amadeus Mozart’s and Christian Doppler’s (the physicist famous for discovering the effect of the same name) baroque birthplace proved every bit as breath-taking as we’d been led to believe. And as expected, was awash with tourists; The Sound of Music was set here; coachloads of Maria fans arrive in their droves. Few though make their way up to the Hohensalzburg Fortress, the city’s fortress which sits atop the Festungsberg. It’s from here that you get to appreciate the best views – high on a hill… I’ll stop now shall I?

By 4:30 we were done. Do we move too quickly? I wonder. Anyway, back to Munich, the promise of an Italian dinner, and the chance to buy yet another train ticket to see another, only this time winter, Olympic Stadium. And all for just 30 Euros for the two of us, return.

If you’ve ever watched Ski-Sunday you’ll have heard of Garmisch-Partenkirchen, the two market towns – the more modern Garmisch (in the west) and very traditionally Bavarian and fresco-filled Partenkirchen (in the east) – that were brought together under duress (and under the rule of Adolf Hitler), in 1935 in anticipation of the 1936 Winter Olympic Games – which they duly hosted, of course!

Thankfully today both the Garmischers and the Partenkircheners seem to get along rather nicely, and it’s instantly obvious this is very much a ski-town. Some of the hotels look stunning. The World Alpine Ski Championships were held here in 1978 and 2011 and traditionally, as a part of the Four Hills Tournament, a ski jumping contest is held in Garmisch-Partenkirchen on New Year’s Day. You can see the jump from the train on the way in. It’s huge! Ski-jumpers are clearly an extra specially brave or stupid breed. 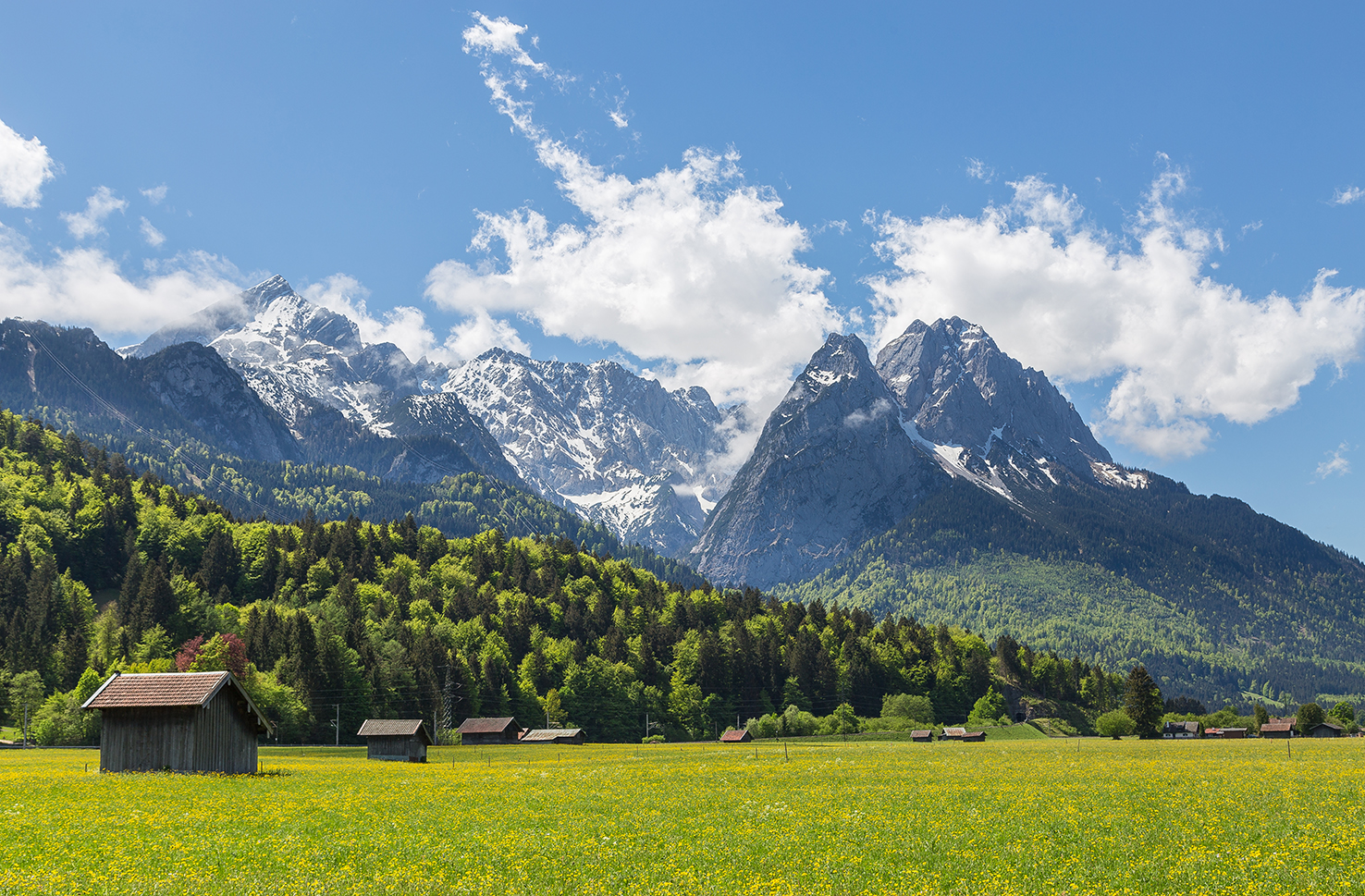 From the central station there’s the opportunity to catch yet another, smaller, cog-wheel drawn train. It takes you to a cable car that then ascends the 2,962m Zugspitz (pic above). It’s Germany’s highest peak. Or alternatively you can take another cable car up Mount Wank. No, honestly! Funny, how David Vine and Graham Bell never mentioned that on a Sunday afternoon! Names lost in translation notwithstanding, this seemingly quiet and beautiful corner of Oberbayern overlooking the Alps really would be a lovely place to spend a few days.

Our time however was running out. Cases to pack, flights to catch. Our last train back to Munich beckoned. Soon after, so too did our return flight back to Brum.

Munich may not be a pretty place, but is an interesting one. There’s history here in abundance, plus art, sculpture, music.., you name it. And as a base for exploring Bavaria, and escaping into Austria, thanks to its superb public transport network, it takes some beating. It may not be the first place you think of, but it really does deserve to put a little higher-up on your “Let’s go there on holiday” list.