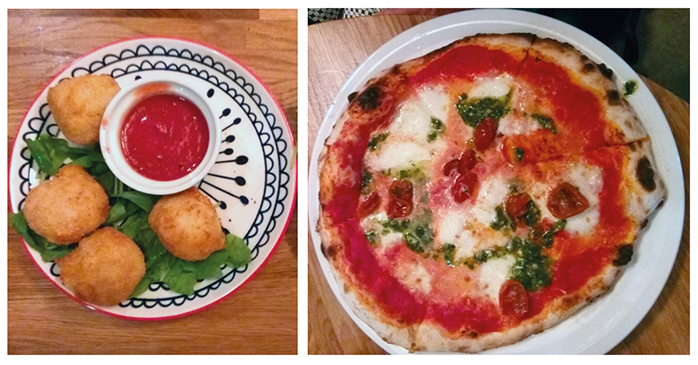 I was sad to see CJ’s restaurant close when the Oyster Wharf development started in Mumbles; it had been there for so many years albeit under different owners. So the arrival of a new venture in its place was very welcome.

Papi’s Pizza was getting rave reviews on social media – wood fired pizza and authentic Italian pastas certainly seemed to be crowd pleasers. We ventured down to Mumbles on a Tuesday evening and secured a table in the middle of the restaurant. The décor is slightly industrial with an Italian influence – comfortable and a bit rustic. The smell of the wood fired oven permeates the room and certainly gets you in the mood for a hearty meal.

Papi’s is a pizza joint with specials advertised daily. The menu isn’t huge, but features all that you would expect from a good Italian.

Our happy band decided to order and then share the spoils – that way we could give a more detailed opinion. Well that was what we said but in truth we were all just greedy to try as many dishes off the menu.

Starters included an antipasto sharing platter of Italian cured meats, cheese, bread, grilled veg and olives. This along with a portion of mozzarella in carrozza (above left) – balls of mozzarella coated in breadcrumbs and deep fried until golden brown, so that the cheese melts into silky strands when you bite into them – was enough to keep us all going until the mains arrived.

Now I have a very bad habit of ordering too much food and then not being able to eat it all – I think the term is having eyes bigger than your belly. So in order to keep the waste to a minimum we decided to share a quattro formaggi pizza (above right) between us, with a calzone polpette – meatball stuffed folded pizza, some zucchini fries and of course a portion of chips.

The pizza was excellent – the base was thin and crisp with slightly toasted edges, just as it should be, with just the right amount of tomato base and cheese – authentically Italian.

A take-away option is available and I am already planning a pizza supper on the beach next year. 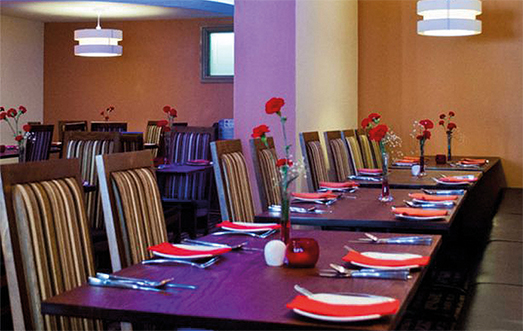 Last month the author and television presenter Simon Reeve held an ‘audience with’ in the Grand Theatre. His evening was a mix of stories of his childhood and his travels into countries that would not usually feature on a holiday wish list. One of his tales of derring do included an incident when he presented a mercenary with a plastic BBC pen and was given an AK47 machine gun in exchange. He cited Bangladesh as one of his favourite places on earth – he loved its people; so it was fitting that as we left the theatre we crossed the road and entered Panshee.

Despite the time – it was gone 10 o’clock – we were given a very warm welcome by owner Jazz who is justifiably proud of his restaurant. 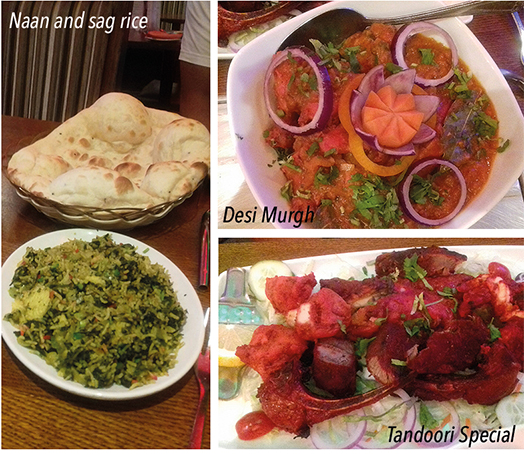 At this late hour we just wanted a quick supper, but since lunch had been eaten more than eight hours ago we were pretty hungry. Simon decided that he wasn’t going to take a break from his usual ‘go-to’ Tandoori mixed grill – here it was given the title of Panshee Tandoori Special. King prawn, lamb chop, chicken tikka, lamb tikka, sheek kebab, Tandoori chicken, naan and chips made for a veritable meaty feast. The quality of the meat shone through – I greedily stole half of the sheek kebab – I love the smoky flavour of the lamb with its slightly toasty edges wrapped in a piece of fluffy naan. I now know not to call it naan bread after the Great British Bake Off debate of last month.

I prefer my chicken and most other meat to be cooked and served on the bone. I think it gives a better flavour and is more moist than chicken breast, so the Desi Murgh with its Tandoori chicken on the bone, garlic, ginger, green chilli, bay and cardamom fitted the bill especially with a side order of sag rice.

This was an Indian curry on a completely different level. The spices were whole as were the green chillies. The flavours were well developed and it was obvious that there was a highly skilled chef in the kitchen.

I am looking forward to returning very soon to have a more leisurely meal and to sample some of the starters such as the cockles and the tilapia pakora.

I was very sad to receive a phone call from Mike Beynon at the Dolphin Inn in Llanrhidian last month, when he called to say that due to retirement Margaret, Karen and he had decided to close the pub.

Last year they celebrated 50 years since Margaret had taken over as licensee to this last remaining proper Gower pub. This was no gastropub, but they did do one of the best ham sandwiches in the area, this was the sort of pub that you went to after a long walk on a hot summer’s day. You could sit in the garden and watch the chickens while supping a cold lager.

Mike has been a supporter of Bay for many years, and I will miss my monthly trip to Llanrhidian to bring him his copies of the magazine.

I along with everyone on the Bay team wish them all a very long and happy retirement.