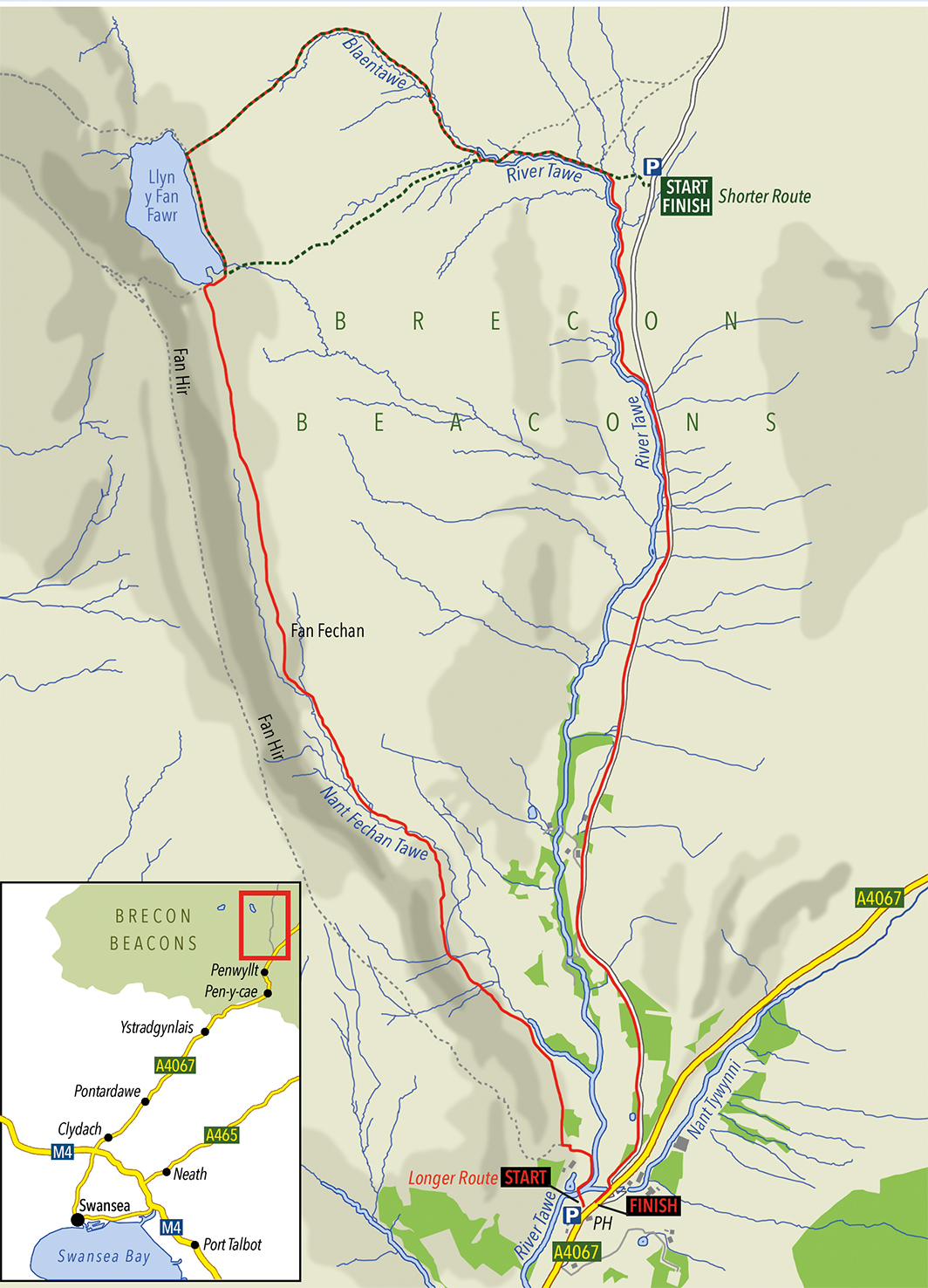 Ian’s walk for November is no stroll in the park; it’s hardcore and not for the faint-hearted. Undertake it with caution and make sure you are wearing sturdy walking boots as the going will be tough.

No time to attempt a humorous preamble to this month’s walk as there’s a lot of ground to cover, literally, so we’ll jump straight in. This is because we’re going all intrepid, taking on something pioneering and expeditionary and Victorian in scale. Venturing out into the wild, remote and expansive reaches of the southern Brecon Beacons, we’re going to search for……wait for it…… the source of the mighty River Tawe!! Exciting beyond, eh? Hopefully, it’ll be the first in a series of three walks, following its path from source to mouth. So, donning our pith helmets in true David Livingstone fashion and ensuring we take sufficient supplies for the task in hand (actually, an egg sandwich and a flask of tea should be fine), let’s go on an expedition!!

I’m suggesting two routes both circular, one challenging and the other shorter and more forgiving, so your choice should depend on your level of fitness. However, I must point out that there are some steepish climbs on both.

The more challenging route starts in the car park of the Tafarn Y Garreg pub, just north of Craig y Nos, but seek the permission of the owners first as it says patrons only. Take the signposted path to the left of it over a bridge, turning right into a meadow exiting it at the far end. At the end of this path after about 100 yds or so go right immediately after the gate and follow the line of the stone wall and fence. This path steadily winds its way uphill, not that steeply, but relentlessly so. It’s well worn so relatively easy to follow, but if in doubt the rule of thumb is to keep the high ridge to your left and the stream to the right. After a mile or so, however, the path leads you to the opposite bank via some rough stepping stones so that it’s now on your left as you continue your ascent. 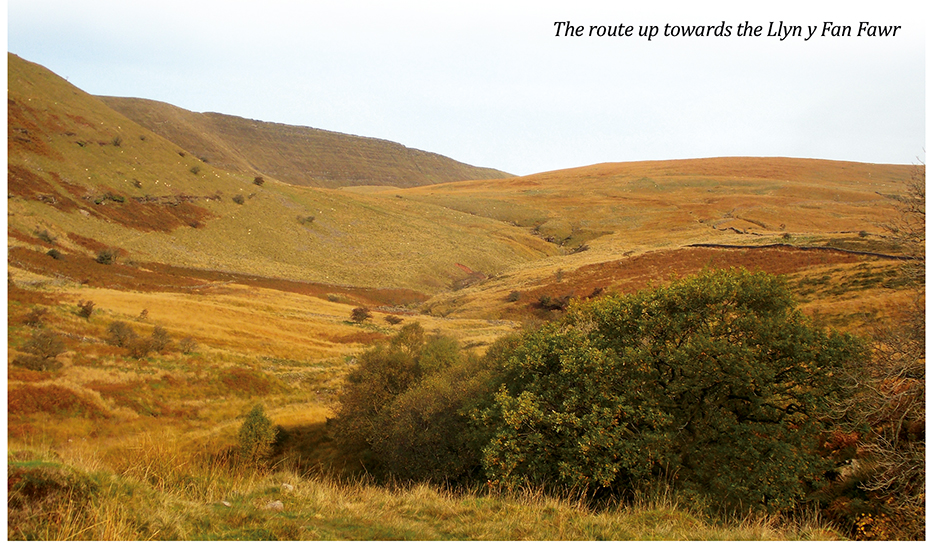 We’re en-route initially to Llyn y Fan Fawr, a lake in the shadow of the imposing ridge of the Carmarthen Fans which forms part of the mountain range known as the Black Mountain. The landscape all around is quite spectacular and brooding. Shaped in the last glacial age, the stark steep escarpment high to your left called Fan Hir was gouged by the destructive force of the ice whilst the path you’re on follows Fan Fechan, known in the trade as a glacial moraine, a long ridge formed when the eroded material was dumped by the melting glacier. Great place to have a game of Cowboys and Indians if you ask me, but the modern day PC equivalent of course all living together in peace and harmony, showing tolerance and respect to the indigenous tribes. And obviously, no killing the buffaloes. 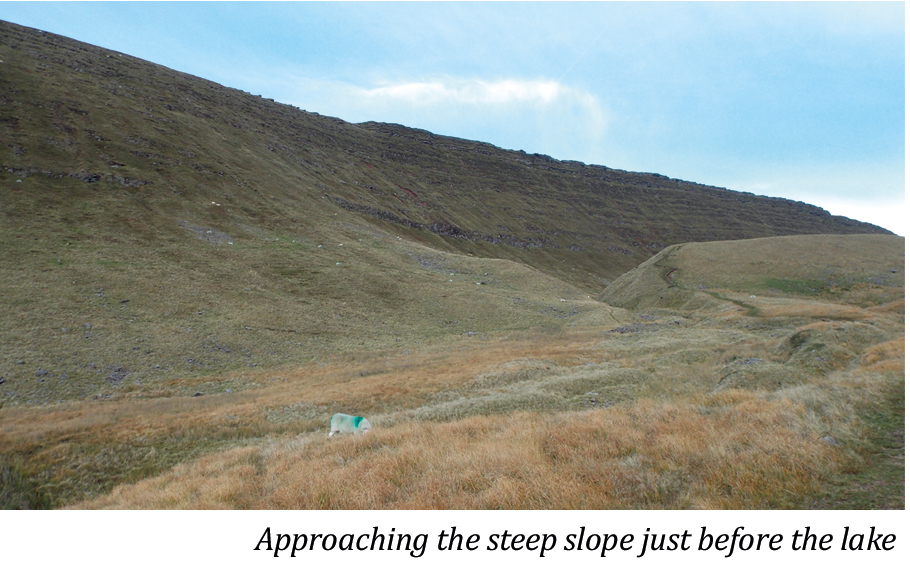 The views opening up to your right include Fan Gyhirych in the near distance and in the far distance our old chums Pen y Fan & Corn Du. Further round to the north east are the northern slopes of the Black Mountains (plural) overlooking Hay and Talgarth, whilst low lying farmland in the direction of Sennybridge pans out ahead. Continuing along the path, you’ll hit quite a steep slope which may leave you breathless but thereafter the ridge becomes gently undulating, until you reach the lake, which is some 3 miles from the start.

This glacial lake is the big sister (or brother) to Llyn y Fan Fach, which is just around the corner and which we visited in the September 2017 issue. Whilst in my opinion it doesn’t have the “wow” factor of its smaller sibling, it nevertheless is a pretty impressive sight. Nestling beneath the highest point of the Black Mountain, Fan Brycheiniog, it sits all serene and magical as its surface gently ripples in the wind. Now, as with Llyn y Fan Fach, there’s probably some legendary tale associated with the place, involving other worldly ladies emerging from the waters to marry local farmers or secret passageways opening only on Mayday leading to a mysterious other world inhabited by pixies and fairies. Frankly, I’m beginning to think these stories aren’t true, so I’m passing on this one if you don’t mind.

Keeping it real then, skirt the shore of the lake to the right and you’ll see two hillocks ahead, one slightly higher than the other. Head for the smaller one and once there, pause awhile. Because this is where it gets exciting. We’re going off piste! In the manner of Henry Morton Stanley, John Hanning Speke et al we’re going bravely into the unknown with no discernible path to follow!! Check us out!! So, looking to your right, pick out Moel Feity a perfectly proportioned hill positioned between the forestry to the left and Pen y Fan to the right. Head directly towards it and descend onto the uneven moorland until 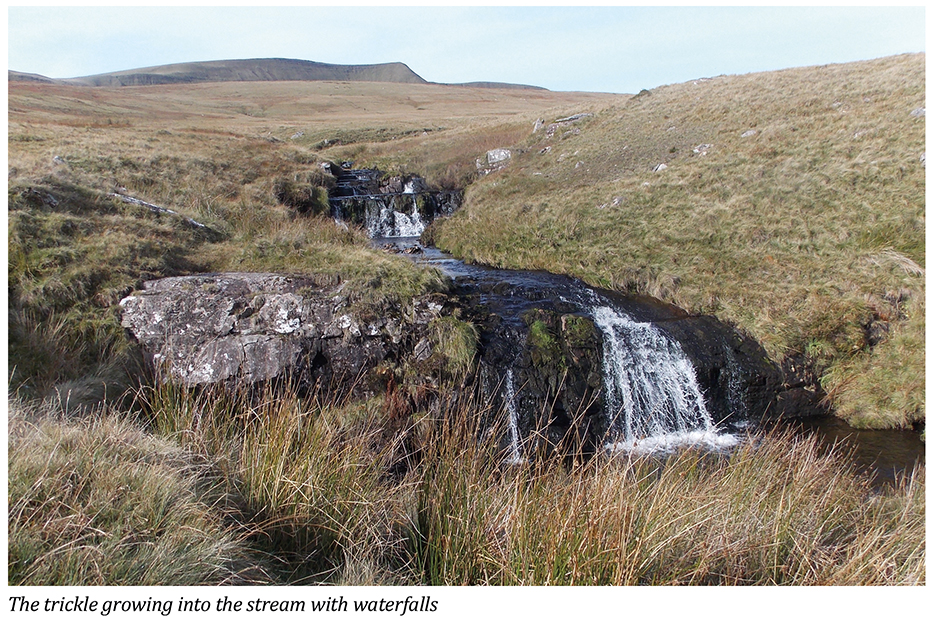 you come across a bog after a few hundred yards or so. Now you’re getting close. In the near distance look out for what appears to be the path of a stream – banks of a metre or so high, interlocking with each other. This is indeed the path of the river but if you trace a line back towards the bog, then you’re on the money. And interestingly, if like me you do the walk after a relatively dry period, you will hear the stream before you see it because it actually flows a foot or so beneath the surface, in what are called subaerial channels* slightly hidden by the grass. Now, apparently the lake is not thought to be connected to the river, but instead it starts out in a series of these tentacle like channels, fed by rainfall, which then merge into one. It’s quite fascinating to be truthful. No River Nile, granted, but it’s quite charming and even profound to think that this is nature in its purest form. 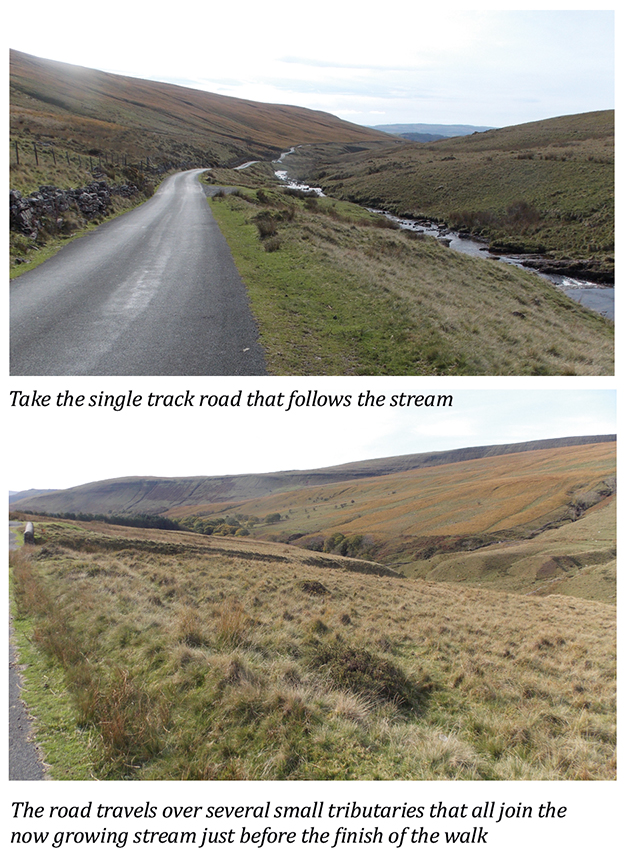 So now begins the next stage of the adventure – following the river to its final destination, although I’m not suggesting you do it all in one go. The trickle soon grows into a stream, as it’s fed along its course by its tributaries, thereby gaining in confidence and swagger. As the flow increases in volume and speed so the valley becomes deeper and steeper cutting its way through the open moorland. It’s tough walking along here, so I joined the road ahead as soon as I could and which in any case follows the river for a while. You won’t have a choice a bit further on because the river travels through private and inaccessible land. A word of caution, however, it’s a single track road, so be very careful!!

The shorter route starts along this road as the map shows and there are a couple of places to park. Although I haven’t tested it, I’d estimate it to be about 3 miles or so, but the first section looked quite steep, so deep breaths. At the start you have to actually cross the infant Tawe, but when I re-visited the area after Storm Callum it was too deep to do so.

So that concludes the first part of our epic journey. Next time we’ll be making our way down the Swansea valley taking in the delights of Ystradgynlais, Godregraig and who knows, even Pontardawe. No, I can’t wait either.

*Thanks to Dr John Hiemstra of Swansea University for some of the technical advice.