I think I may have found another Swansea restaurant that will be filed under ‘reserve for special occasions’.

I have previously said that I like to keep some places just for high days and holidays – otherwise how do you make it out of the ordinary? To date my ‘special’ restaurants have included Hanson’s and The Pantygwydr – both serve extremely high quality food in a relaxed atmosphere – I really don’t want to have waiters at my elbow replenishing my glass after every sip.

The Riverhouse is in what used to be the ice-house that served the docks from the late 19th century. It’s an attractive building that has been tastefully extended with a modern glass addition. If I were to have any criticism it is that it is noisy – the hard surfaces of the bar and restaurant amplify every voice and sound of cutlery on china. It’s not a problem for me but I know some folk have problems in hearing in such an environment.

After pre-dinner drinks in the bar, we were escorted to our table by a delightful waitress, who looked after us for the evening. It was a busy Saturday night service and the restaurant was full of diners chattering and laughing – in fact there was quite a party atmosphere, which was fitting as we were celebrating my sister’s birthday. 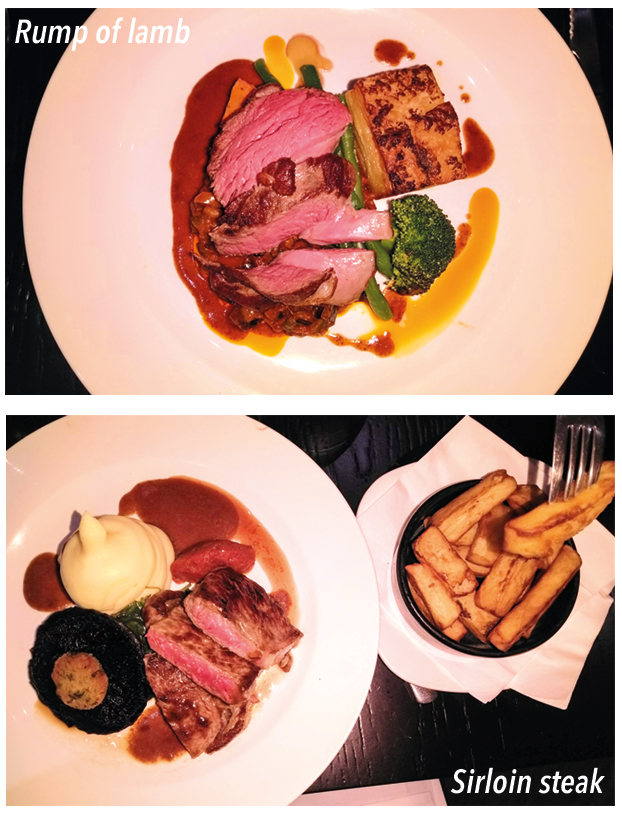 The menu is fairly short, which always pleases me as it pretty much guarantees that your food will be cooked to order. There were some interesting starters – why is it that the starters always appeal to me more than the mains? Seafood Chowder with clams, samphire and croutons took Simon’s fancy. Ever since we went over to Kinsale on the ferry and ate seafood chowder every day,

if it’s on a menu Simon has to sample it. This one was declared ‘very fine’. It was very creamy and the only complaint I heard was that there wasn’t enough of it. The smoked salmon with celeriac remoulade and horseradish mousse was beautifully presented – I had intended taking a photograph but after a couple of glasses of wine I forgot until it was half eaten. You’ll just have to take my word for it.

How Portobello mushrooms got the name has often puzzled me – if they are Italian it translates as beautiful door, however in Italy they are called Cappellone – meaning big hat. Whatever the name the fact is that they are a perfect accompaniment for a sirloin steak and chips especially when joined by a deeply rich tomato chutney and truffle butter. The slow cooked rump of lamb was soft and buttery as were the dauphinois potatoes – the ratatouille and fine beans provided the right amount of acidy to counter balance all this richness.

The waiting staff at the Riverhouse provided an exceptionally friendly service, without being intrusive, which can be a very fine line to walk.  I’m looking forward to returning when the evenings are light and we’ll be able to appreciate the fabulous views over the marina. 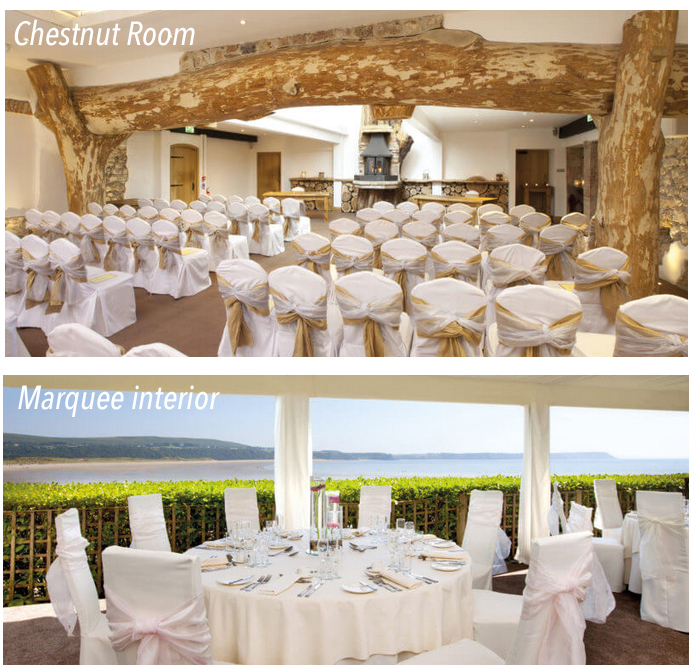 I had the very great pleasure of attending a wedding at the Oxwich Bay Hotel earlier this year. The bride had always wanted a beach wedding where she could wear flip flops and walk across the sand in her bridal finery. The fact that this was January made no difference to our beautiful bride. The gods were smiling on her that day as the weather was absolutely perfect – the sky was blue and the sun shone –true it was a bit chilly but I think she was kept warm by adrenalin and love!

This was my first wedding experience at the Oxwich Bay and I was so impressed that I contacted Ian Williams, owner of this special Gower venue and told him how much I had enjoyed it. I’m a firm believer in telling businesses when they get it right – sometimes all they hear are the complaints.

Everything from the wedding ceremony held in the Chestnut Room, complete with log fire to the ceilidh dancing in the marquee, was perfect. The wedding breakfast was served in the most professional manner, everyone seemed to be eating at the same time, which is quite an accomplishment when you have over 100 people to serve. My roasted red pepper soup was piping hot when it was put in front of me, and the poached salmon was perfectly cooked, slightly pink and very moist.

I had been a bit worried that sitting in a marquee in January could be a bit chilly, but no, the heating was provided by huge warm air fans that kept me very toasty. In fact we had to have it turned down when we started the ceilidh and were dancing up and down the marquee stripping the willow!

In fact I’m not sure if all our dancing was in some part responsible for the landslide that occurred on the headland in the early hours of the following morning. I wonder if ‘did the earth move for you’ was the topic of conversation at breakfast?