‘Or a retirement complex,’ Husband suggested.

‘Whatever it is it’s going to be enormous.’

For a long time, whenever we drove along the Mumbles Road, this was our conversation until at last we discovered that the building leading to this speculation was, in fact, just a house. If you’ve travelled between Blackpill and West Cross at any time in the last year or so you will have noticed the ‘mansion’ being built on the hill. The source of increasingly outlandish rumours, like Topsy it’s ‘just growed’. And growed.

At the beginning of last year I thought the new owners would be in residence for the summer; in autumn I thought they must be in for Christmas.

But as I write this in early February the builders are still hard at work.

‘They can build whole new estates in the time it’s taking for one house,’ I said to Husband one day as we drove past. ‘If I were rich enough to afford that I’d have paid the builders extra to get it done faster.’

Husband pointed out that it’s different when you’re building a one-off and you’re likely to come across all sorts of unexpected hiccups. I suppose he means like a cosmic wormhole where you want your living-room floor to be. Or an old coal mine under your new swimming pool.

Still, it’s a lesson in patience that’s for sure.

And patience is something I lack. Unlike grand-children. I have lots of those. Our seventh was born in early February and she is, of course, absolutely delicious. Perfect – and she only took nine months to build.

Well, nine months and one week. She kept us waiting. And no amount of money in the world could have persuaded her to come out before she was ready. 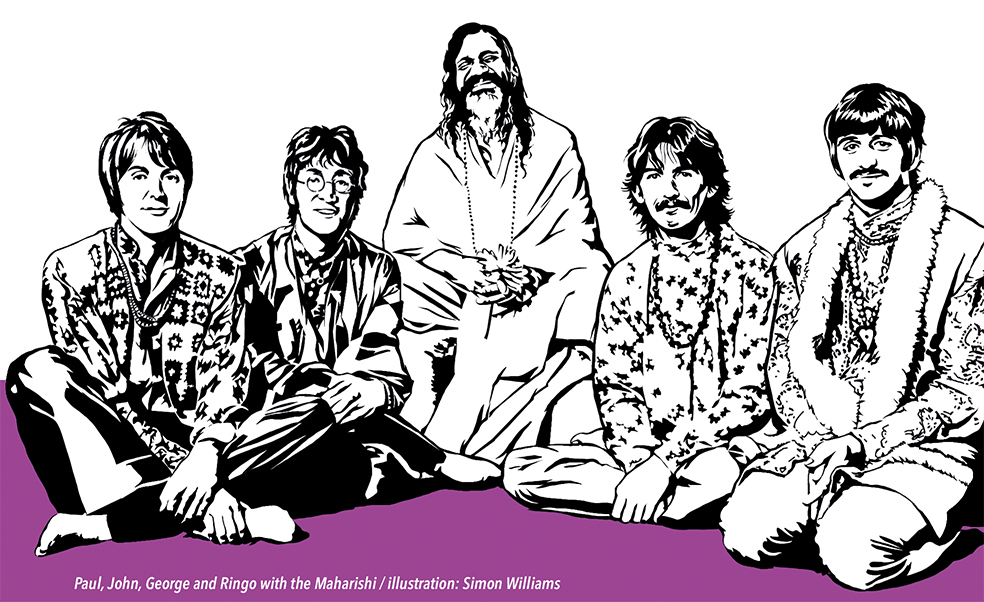 Way back in 1964 The Beatles sang that ‘I don’t care too much for money, money can’t buy me love’. It was still comparatively early in their rise to fame but even at that stage they would have been enjoying a lifestyle they perhaps hadn’t been used to. They’d have been finding out that money did talk and could buy you a whole lot of things, but, even then, they were beginning to suspect there was more to life than that.

Paul McCartney, the writer of the song, said, ‘The idea behind (the song) was that all these material possessions are all very well, but they won’t buy me what I really want.’

In 1967, at the height of their fame, in the search for what they really wanted, the Beatles met Maharishi Mahesh Yogi, an Indian guru and pro-ponent of transcendental meditation. The Maharishi later said that the Beatles had told him that they had long been seeking a spiritual exist-ence. ‘They had tried drugs and that didn’t work.’

It’s a familiar story. People reaching for something but they’re not quite sure what. The Beatles had everything money could buy; they had millions of fans – including me – who adored them; they all had wives or partners; yet it wasn’t enough.

So, what was missing from their lives? And what is missing for the many who spend their lives wandering and lost? I don’t think it’s necessarily love.

I used to help in a youth club and one night a boy had done a particularly good drawing. I said this to him, but he just screwed up the paper. ‘It’s rubbish,’ he said. He was so used to being told that everything he did was rubbish that he believed he was useless. He had no idea of his own inherent value.

There are many people like that. We meet them at Zac’s, and I see them in prison. But sometimes they’re much less easy to spot. They hide their insecurities and uncertainties beneath bluster and arrogance.

Zac’s takes its name from a story about a wealthy tax-collector who’d made his money by robbing his own people. Zacchaeus was also short. So short that when he heard Jesus was coming to town he climbed into a sycamore tree so that he would be able to see him. I can only imagine how desperate he must have been to see this teacher that he was willing to sacrifice his dignity like that.

But Jesus saw him and called him by name. In fact, Jesus invited himself to Zac’s house for tea. And this seemingly simple act changed Zac’s life. He gave away much of his money and found a new meaning in life.

When we know we are loved and have value just because we are, we can stop searching and simply be the people God made us to be.

of the value of men,

through the eyes of God.