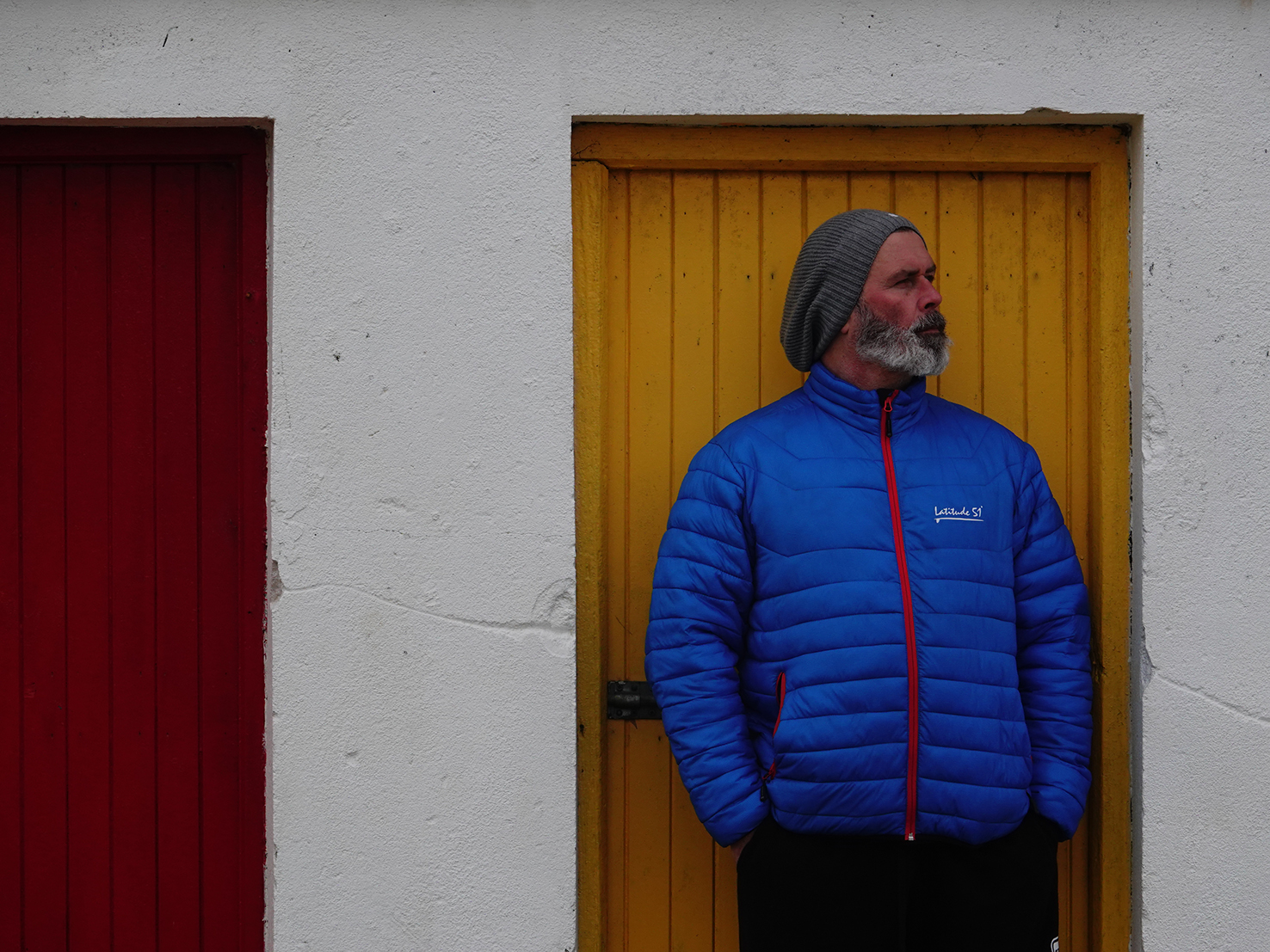 Winter getaways have been a fixture of the Welsh surfing scene for decades. Since the early 60s, surfers have looked to warmer climes for a little respite from the long cold winter months.

Destinations like Morocco, the Canaries and Sri Lanka are popular spots that offer some winter warmth and great waves for the budget traveller.

So, it raised a few eyebrows with my friends when I decided to book my winter break this year, travelling and surfing the “wild Atlantic way” on the West coast of Ireland.

Now on the face of it, this could have been a huge mistake. The Emerald Isle is no warmer than home, the weather can be windier than Wales on its worst day, wetter than an otter’s pocket for weeks on end and the ferries are pretty damn expensive for a short boat ride in February too.

On the plus side though, I have a motor-home, so accommodation would be free. It was undoubtedly going to be quieter than the more obvious destinations people would be heading to and there should be no shortage of swell at that time of year.  I just needed the storms to come separately to the swell, otherwise the great waves they create are ripped to pieces, rendering them useless for surfing. If this happens, you can find yourself huddled around a fire in a pub, drinking Guinness for days, waiting for a break in the weather, wishing you had booked that trip to the Canaries instead. 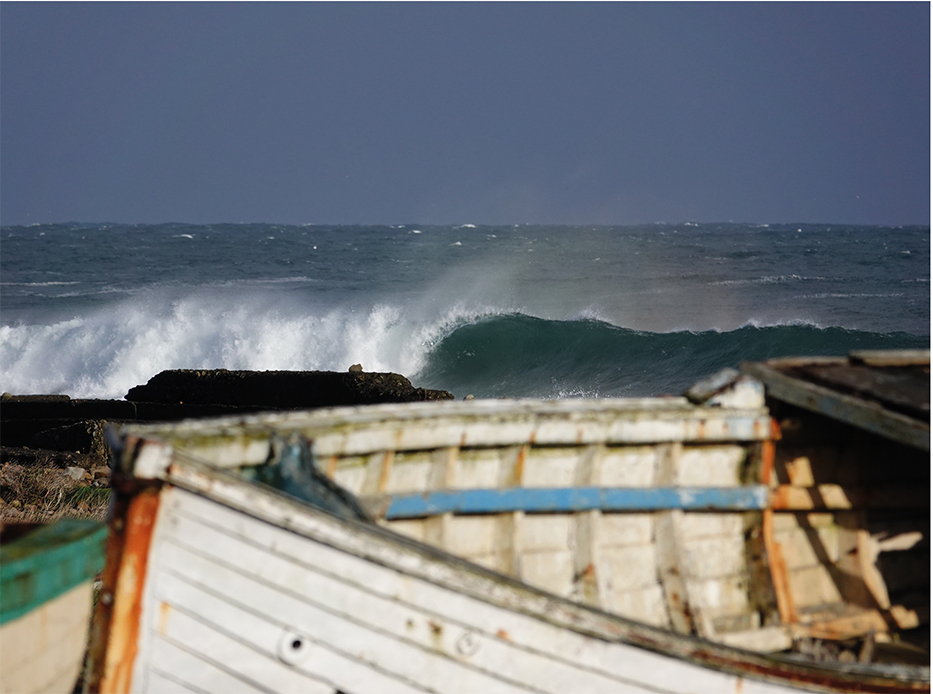 Well, with the ferry booked and the motor home packed to the gunnels with all manner of surfboards, wetsuits and camera gear, all that was left for me was to pick up my travelling partner Paul Gill, for this risky adventure. Paul is a keen surfing buddy of mine and one of Britain’s best surf photographers, so if we did luck in with the waves, we were sure to get some top shots.

If the first 24 hours were anything to go by, this trip was looking doomed. We almost missed the ferry because my watch decided it was a good time to run slow. As a result, I was cruising, thinking I had plenty of time to stop and shop for a few last food supplies in Pembroke Aldi when really, I should have been booting it straight to the ferry terminal. We were further delayed as we couldn’t agree on important matters such as whether to buy the budget pate at 59p or upgrade to the luxury one for 75p.

We eventually made it to the checkout, at which point Paul realised our timing mistake as his accurate watch was showing our ferry leaving in 10 minutes!

With posh pate hurriedly stowed, we bolted to the ferry check-in to be greeted with an empty car park and a lady hanging out the check-in booth waving two boarding cards and shouting our names.

Where the river meets the sea. Easkey River emptying out it’s peaty water into the surf break creating this unusual double colour wave

We drive by, grab the tickets and are ushered onto the ferry with moments to spare as they hurriedly close the bow doors behind us.

We find a couple of chairs in the saloon bar and settle down for the sailing, thanking our lucky stars that we had averted a disastrous start to the trip.

Upon arriving in the port of Rosslare, we start the 5-hour journey across country to our destination, the west coast and the wild Atlantic way. Our trip was back on track, or so we thought.

At around midnight, the rain that had been falling for quite some time, started to slowly turn to sleet. It was at this point that I vaguely remember my wife saying something about snow before we left but I hadn’t really paid too much attention.

As the sleet quickly turned to snow, I wished I’d been more attentive to my wife’s warnings. We were now climbing up into the hills. The temperature reading on my dashboard drops to -2 degrees. With the snowfall getting heavier by the minute, the roads become treacherous. We have no choice but to pull over and sleep the night in the ever-thickening snow. I slip into an uneasy sleep with images of being stuck in a drift and our surf trip turning into a skiing one running through my mind.

Morning arrives, thankfully bringing with it a dose of rain which melts the snow, allowing us to continue our journey. We are back on track.

Two hours later we arrive at the rugged wave-battered coast that is the wild Atlantic way and to our horror, were greeted by an ocean that looked more like Lake Geneva. It was flat as a pancake. This trip was beginning to feel a little jinxed. But, taking the optimist’s view, things could only get better.

We took a spin up the coast and eventually managed to find some small fun waves to break the ice with later that afternoon. Things were looking up!

We camped up for the night next to the ruins of a medieval castle with views of the ocean through every window. The clouds that had lain heavy in the sky all day parted, just in the nick of time for us to be treated to the most awesome sunset to raise our spirits even further. 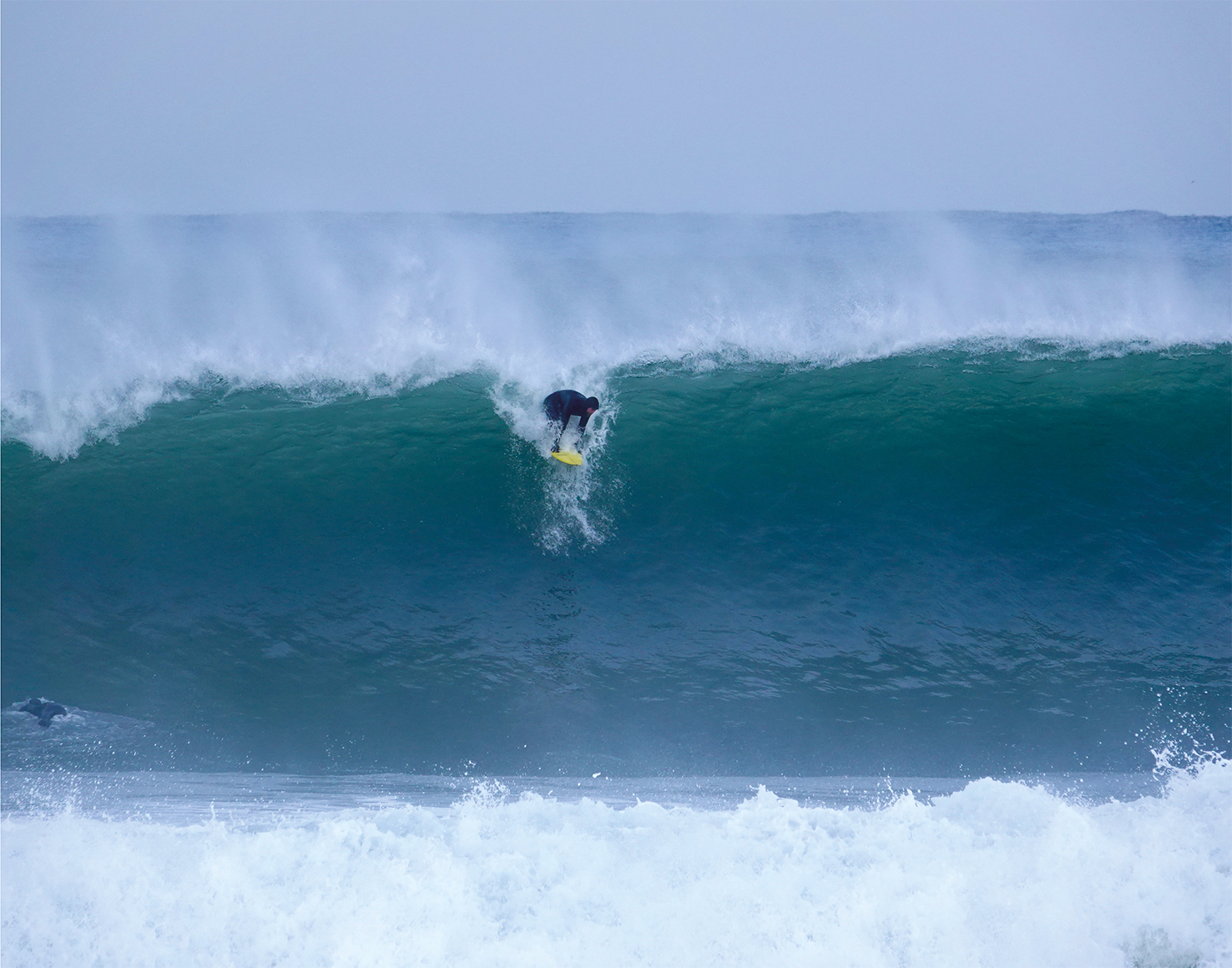 After a glorious sleep, we woke up early to go and check one of Ireland’s top waves in the hope of scoring some proper surf. Kilcummin harbour is a world class wave producer, so we were keeping our fingers crossed that she would deliver for us. And boy did she deliver! 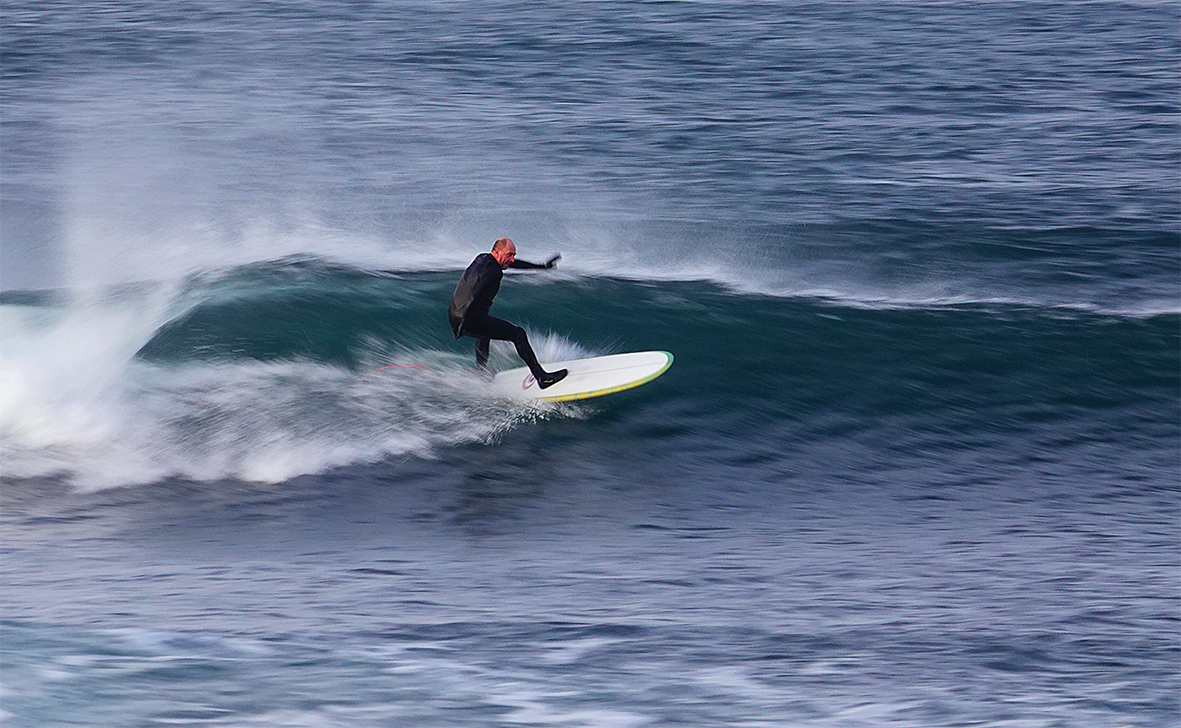 As we arrive at the harbour, we are greeted to the wonderful sight of perfectly shaped swells, more than twice your height tall wrapping their way down the boulder reef. We hurriedly parked the van and jumped out to take a closer look at the setup. There were a few guys out already, and it was an awesome sight to see them flying down the walls of these enormous waves, carving their signatures on the wave faces. We hurriedly got suited in rubber and joined in the action.

And so began the most epic day of surfing. Sharing these classic waves with your mates, hooting their great rides and laughing at the inevitable wipe-outs is what completes the experience. We trade waves for hours on end until we are forced back to shore with jelly legs and noodle arms, tired but grinning like fools after the most beautiful sessions I’ve had in many a long year. 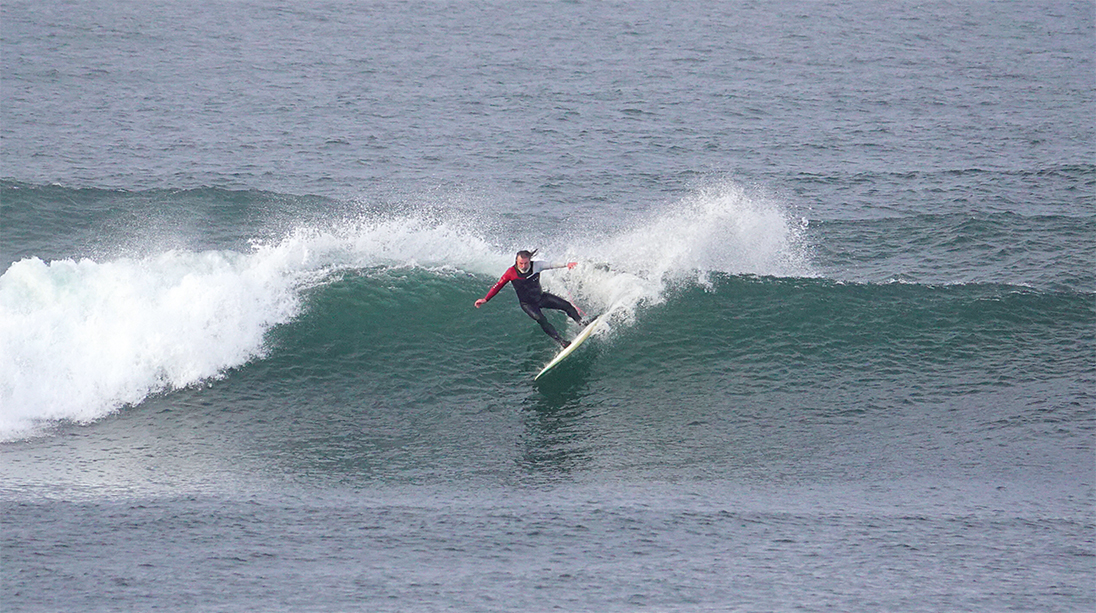 Like a Phoenix rising from the ashes, our trip had turned from awful to awesome in the blink of an eye. This day was so majestic it was always going to be a hard act to follow.

However, our luck held strong and over the next two weeks, we were blessed with epic conditions at all the surf spots we visited up and down the wild Atlantic Way. We met some old friends and made a few new. We surfed extraordinary waves and sampled some Guinness too. 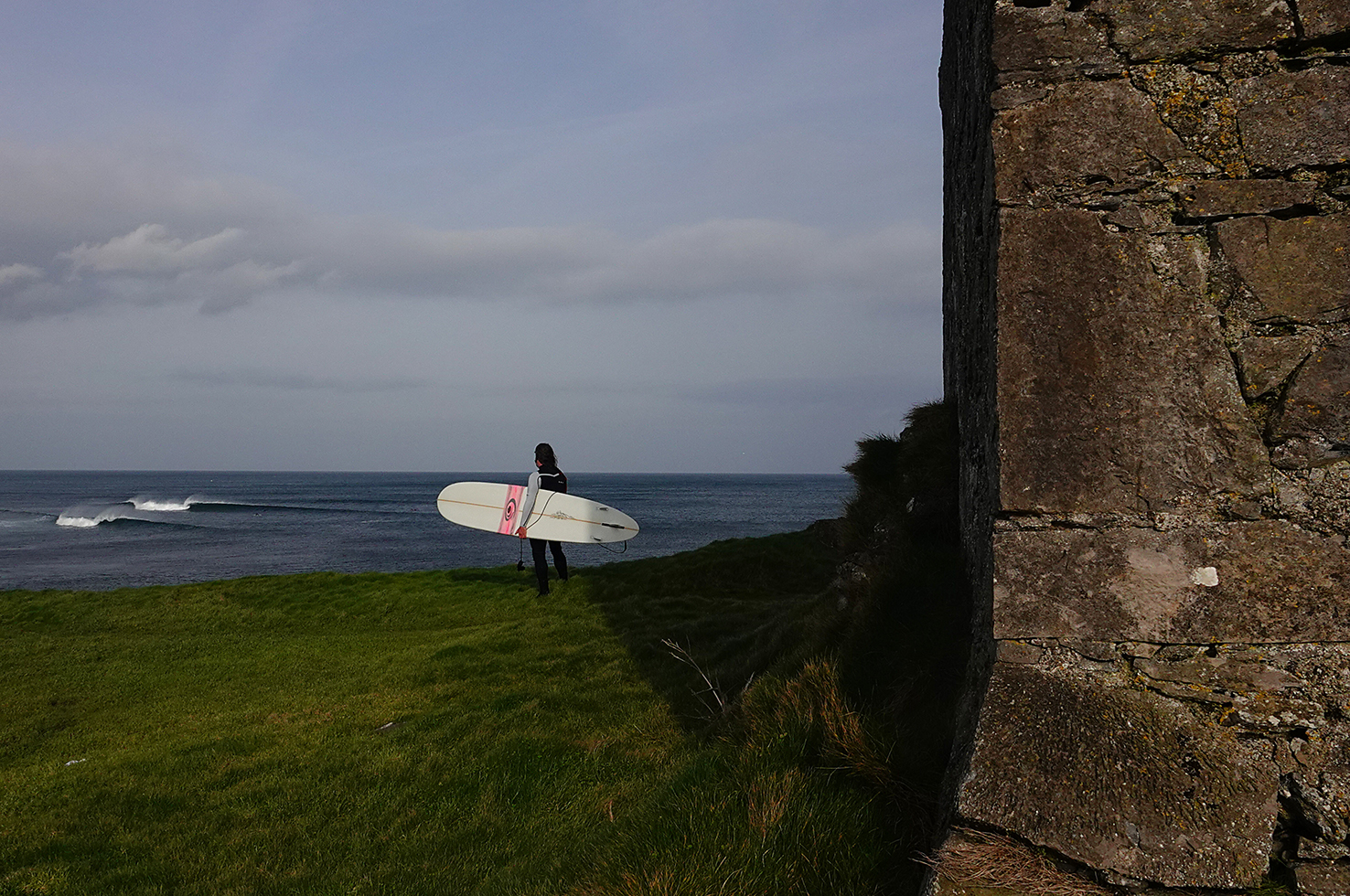 Thanks for everything Ireland, we had a swell time – Paul Gill

The Emerald Isle is not a usual winter destination, but I for one would come back in a heartbeat. The weather may be a tad inclement and you can certainly leave your sunscreen at home, but the place is breathtakingly beautiful, the people are friendly and with a bit of luck the waves can be amazing!