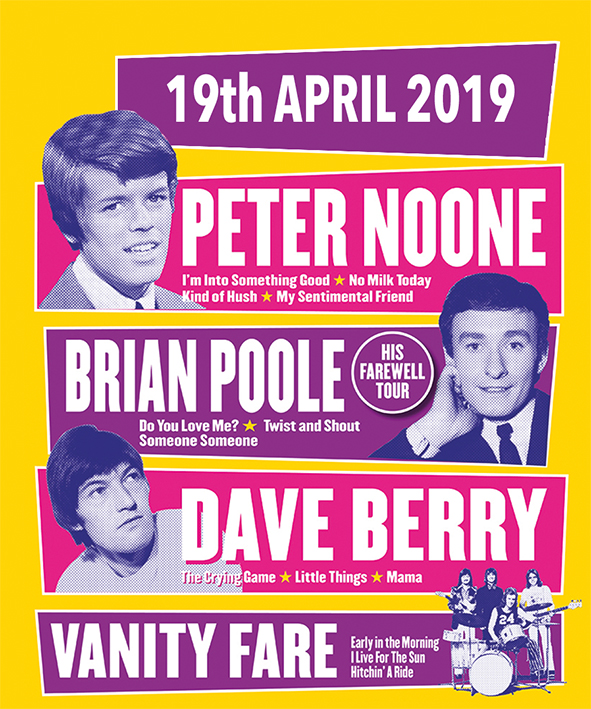 Bay is giving you the chance to WIN a pair of tickets to watch the Solid Silver 60s Show at the Grand Theatre on 19th April. Featuring original popstars of the era, Peter Noone of Herman’s Hermits, Brian Poole of the Tremeloes, Dave Berry and Vanity Fare. The show has been touring for a record-breaking 34 years, seeing an incredible range of artists share the stage together throughout its run.

Famed as frontman of the incredibly successful Herman’s Hermits, Peter Noone’s canon of hits include ‘I’m Into Something Good’, ‘No Milk Today’, ‘Kind of Hush’, and ‘My Sentimental Friend’. Having sold countless records world-wide, Noone has regularly toured on both sides of the Atlantic for several decades.

As lead singer of beat group The Tremeloes, Brian Poole had an incredible number of hits that went on to become staples of the era, including ‘Twist and Shout’, ‘Do You Love Me’, ‘Candy Man’, and ‘Someone Someone’.

One of the original teen idols, Dave Berry garnered attention for his unique live performances, as well as his notable songs including ‘Memphis, Tennessee’, ‘This Strange Effect’ and ‘The Crying Game’, voted by Time Out as one of the Top 50 Saddest Songs of All Time.

Completing the hit-laden line-up of acts will be Vanity Fare, who dominated the charts in 1970 with their track ‘Hitchin’ A Ride’ which sold over a million copies, as well as the Top 10 hit ‘Early In The Morning’.

Which band did Peter Noone front?

Terms & Conditions: No cash alternative. Tickets are non-transferable. Standard tickets only. No correspondence will be entered into. Editor’s decision is final.