This month, Ian Bateman completes his walk along the Tawe from its source all the way to the sea.

In the previous issues I said we’d tackle this monumental trail in four sections instead of the original plan of three. But after giving it some thought I’m reverting to the original idea, mainly to avoid boring the pants off you. So, let’s get on with it.

The final section of around 16 miles goes from Ystradgynlais to Swansea where the valley has a rich and varied industrial history, some evidence of which you can still see today. The river itself becomes wider, slower and dare I say less attractive as it passes through the towns and villages of the valley. I completed this section in one go but it can be split up into smaller chunks as the entire route is well served by public transport. The sixteen miles or so were tough without a doubt, mainly because of the tarmac surface along much of the way which plays havoc with the soles of your feet (we follow the cycle path for the majority of the route). But for seasoned walkers it should be fine. For the rest of you don’t be put off. A mate of mine living in Cwmllynfell, walked home from the Top Rank one Saturday night back in the 70s after spending his last pennies on a curry in the Asian Grill. Not only had his energy been sapped after dancing all night (or at least standing on the edge of the dance floor eyeing up the talent – yes, on reflection that’s more likely) but he also did it in platform shoes and flares! Good effort Jeff. So, if any motivation is needed then there it is. 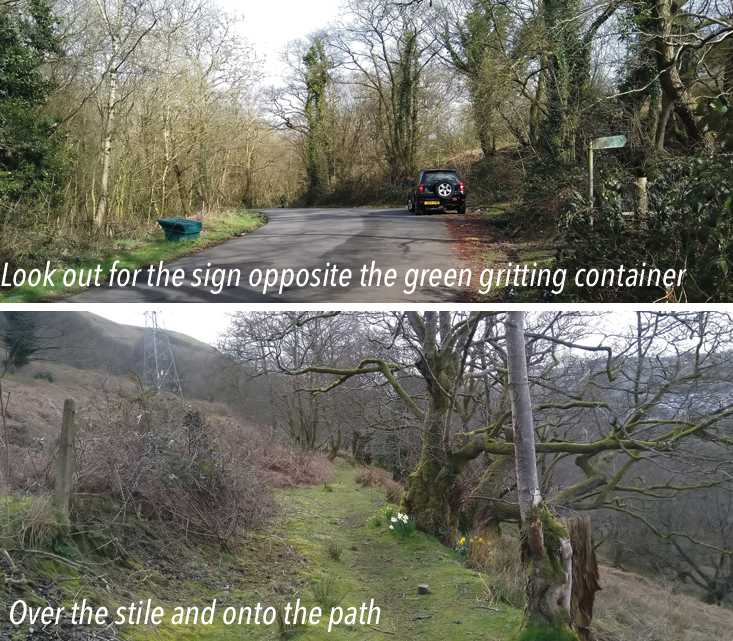 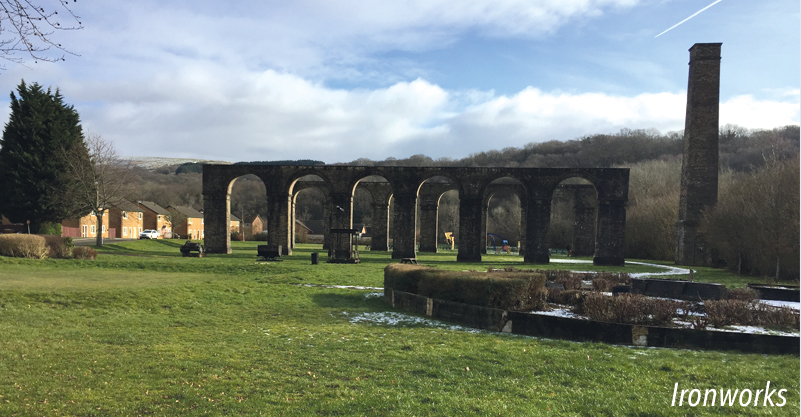 From the cross in Ystradgynlais walk down Heol Eglwys towards the bridge and just past the park with its Gorsedd stones, a legacy from the National Eisteddfod held here in 1954, turn left down Heol Pantyffynon and cross the footbridge which appears to your right shortly after. Turn left on the main road and once the houses start on the left a footpath appears between the river and housing estate. Once on this path you’ll soon pass the iconic arches on the site of the once grand Ynyscedwyn ironworks. The arches aren’t actually part of the original works, but are remnants of an unfinished extension (yes, we’ve all experienced builders like that). The river is quite attractive along this stretch as it flows gently past high and picturesque wooded slopes on the opposite bank. Emerging onto a residential street bear left and then left at the end when you’ll see a small road bridge in front of you. *Be careful of traffic* Cross the bridge and follow the road up the hill and just opposite a green gritting container cross the stile which leads onto a path. You’ll have a choice here; either stay on the path or take the route of a disused railway line as I did…the views from here are pretty impressive and once again puts a completely different perspective onto familiar sights as the vista takes in Ystradgynlais, Ystalyfera, Godrergraig and the flat table top summit of Mynydd Allt y Grug towering above, on the opposite side of the valley. 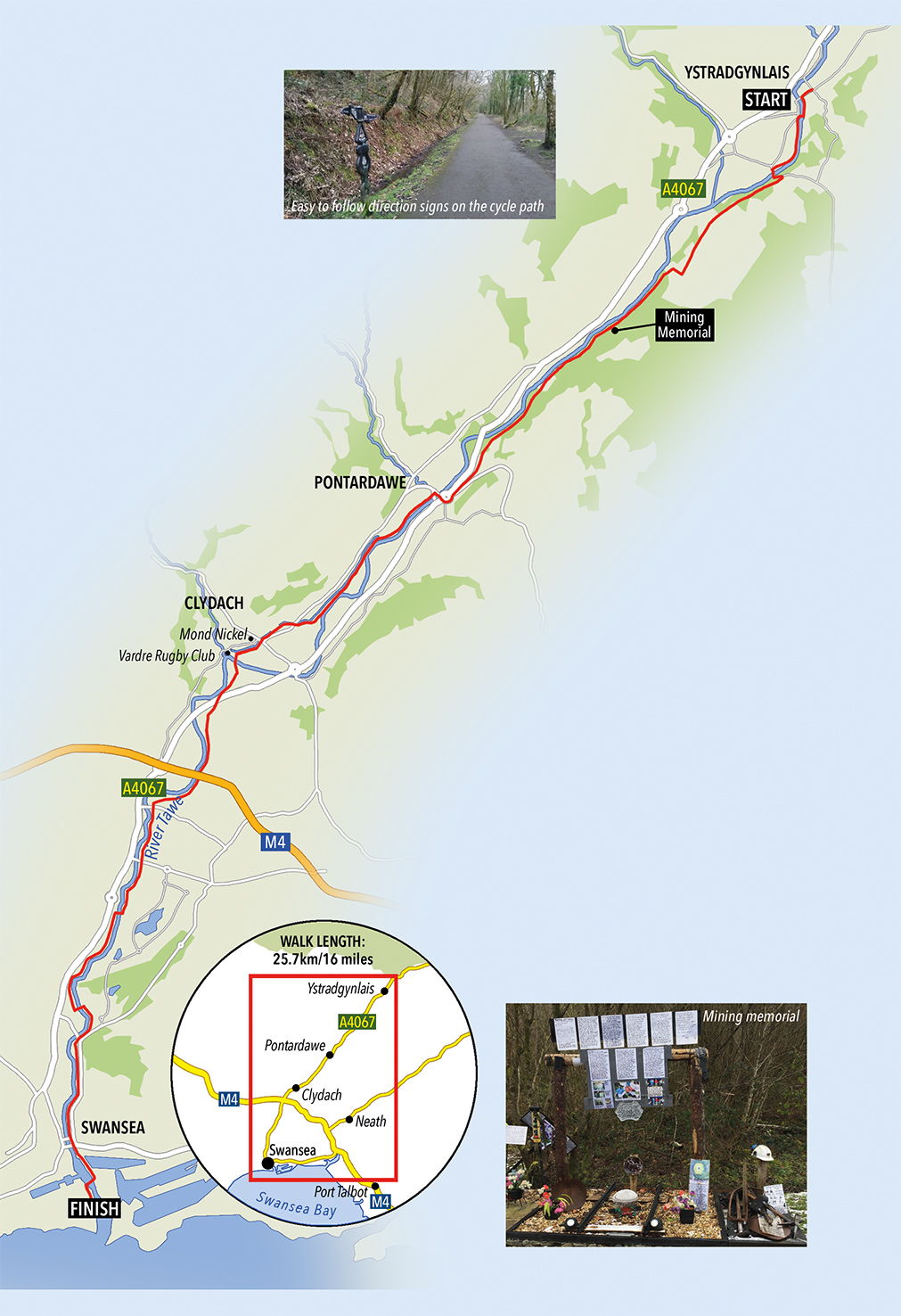 From your vantage point on the mountain, you get a feel for the shape of the valley too, a distinct Ushape and steep sided, which is characteristic of the erosional effects of glacialisation. Geologically, the River Tawe is a relative youngster and it follows a fault line known in the trade as the Swansea Valley Disturbance, which you could quite easily be forgiven for mistaking it for a Saturday night out in Pontardawe.

Carry on this path for a mile or so but a word of warning it can get a little muddy, so don’t wear daps. Looking out for a waymark directing you to the right, descend sharply and after a 100-yards or so a sign to the left onto the St Illtyds long distance path and finally onto the cycle path on the valley floor.

Whilst you temporarily left the company of the river the moment you joined this mountain path, it will now almost be your constant companion all the way back to Swansea, for the route is basically the cycle path which straddles the river. Cheating a bit,I suppose, but very convenient nevertheless. 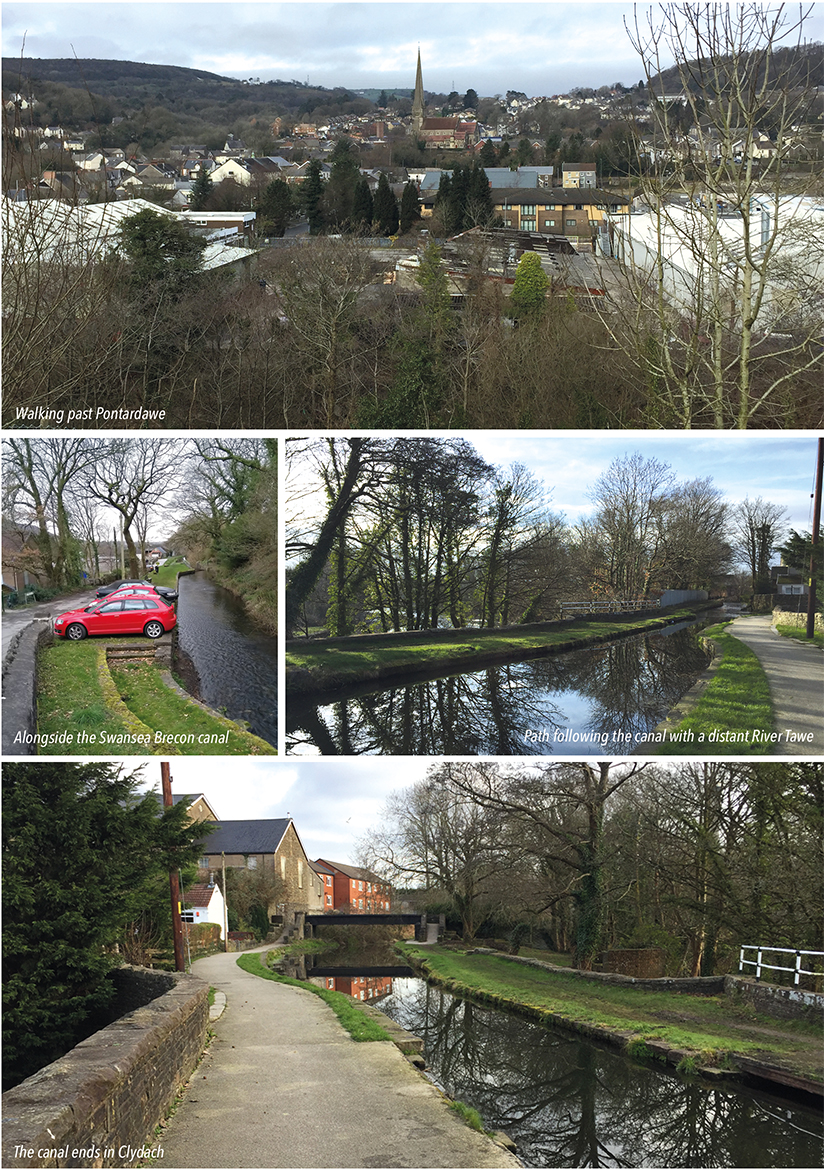 Historically, the industries associated with the Upper Swansea Valley are iron, mainly at Ynyscedwyn and coal mining. If you needed to appreciate how dangerous either industry could be then there’s a timely reminder a little way along the path in the form of a beautifully poignant and heartbreakingly sad memorial to the four miners who tragically lost their lives in the Gleision mining tragedy in 2011. It’s a homemade tribute to those tragic men and done in the most tasteful way, with small mining artefacts coupled with photos of the men with heartfelt tributes and messages of love from family and friends. It’s very touching.

Moving on, you’ll come to Pontardawe with the church steeple of St Peters dominating the skyline and after you walk past the school playing fields, the path swings to the right and you leave the banks of the river temporarily to join another  watercourse, the Swansea Brecon canal. This was built between 1794 and 1798 between Swansea and Abercrave for the sole purpose of transporting coal to the port of Swansea for export and for use in the smelting industries of the Lower Swansea Valley.

Next up is Clydach, whose growth in the 19th century could largely be attributable to the industrialisation of the valley and in particular to its location on this main transportation route. Follow the cycle path signs which direct you to the left just after the Mond Nickel works where you’ll leave the canal. Follow this around Vardre Rugby ground, down a country lane and you’ll emerge in Ynystawe rejoining the river as you do so. You will notice that the scene around you has changed quite con-siderably with the narrow valley with its steep sided slopes giving way to a large bowl like landscape which largely accommodates the Enterprise Park as we know it today. 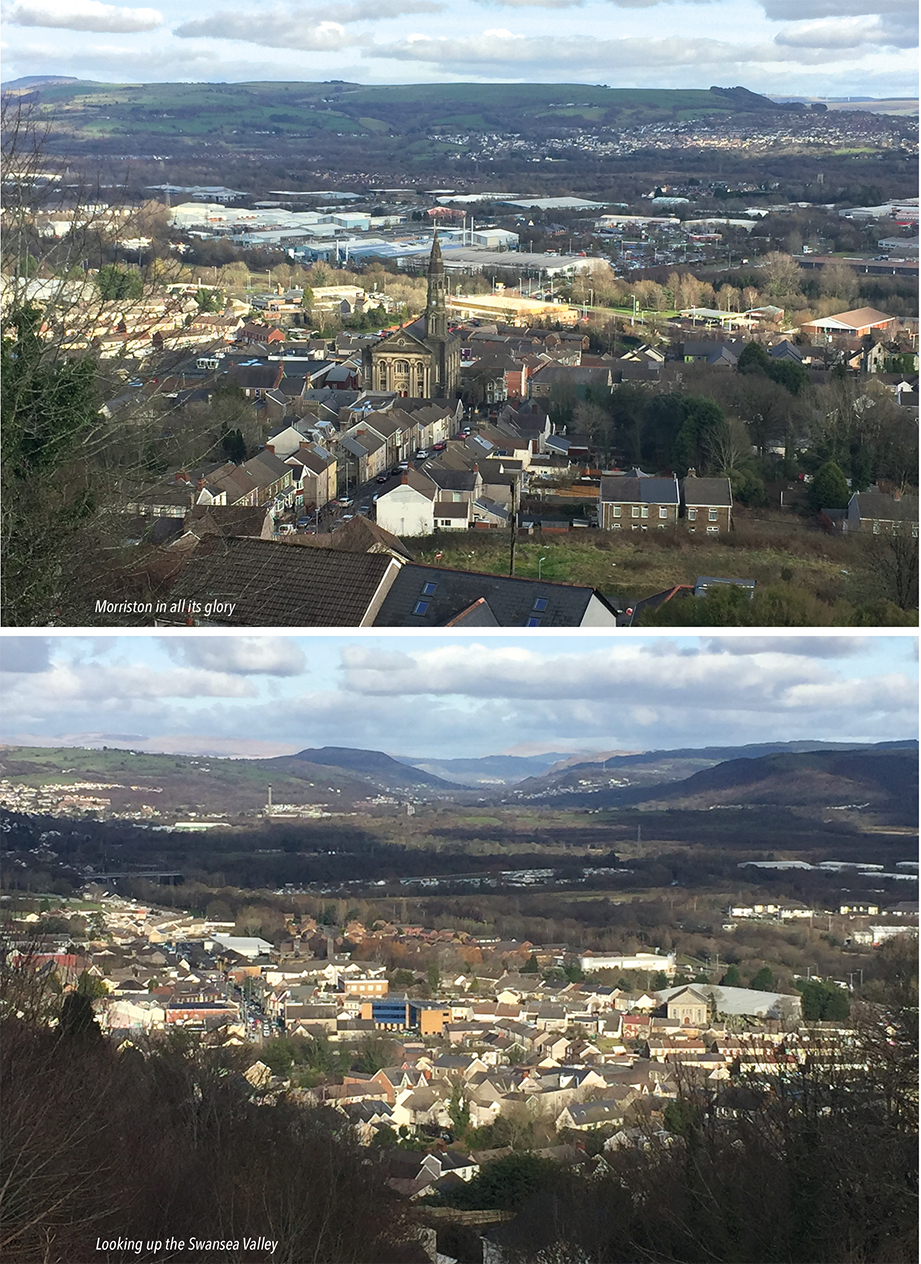 Now, you will be aware that on the banks of most of the world’s major rivers are great towns and cities; Cairo on the Nile, Paris on the Seine and New Orleans on the Mississippi to name but a few… And the Tawe is no exception. For coming up next is surely the jewel in its’ crown – Morriston. This magnificent and legendary town, commanding the western bank of the river, is a social and architectural wonder with the mighty and extraordinarily impressive Tabernacle chapel standing proud, pointing to the heavens. And then if the excitement couldn’t get any greater, on the horizon, the DVLA, that shining example of the wonders of 70’s architecture overlooking it all, standing tall and well, chunky. Pause awhile and marvel.

Whilst industry has been a major feature in the valley, say from Abercrave down, no-where has been more heavily and densely industrialised than this next section; the Lower Swansea Valley.

‘It came to pass in days of yore

The Devil chanced upon Landore

Quoth he, by all this fume and stink,

I can’t be far from home, I think’ 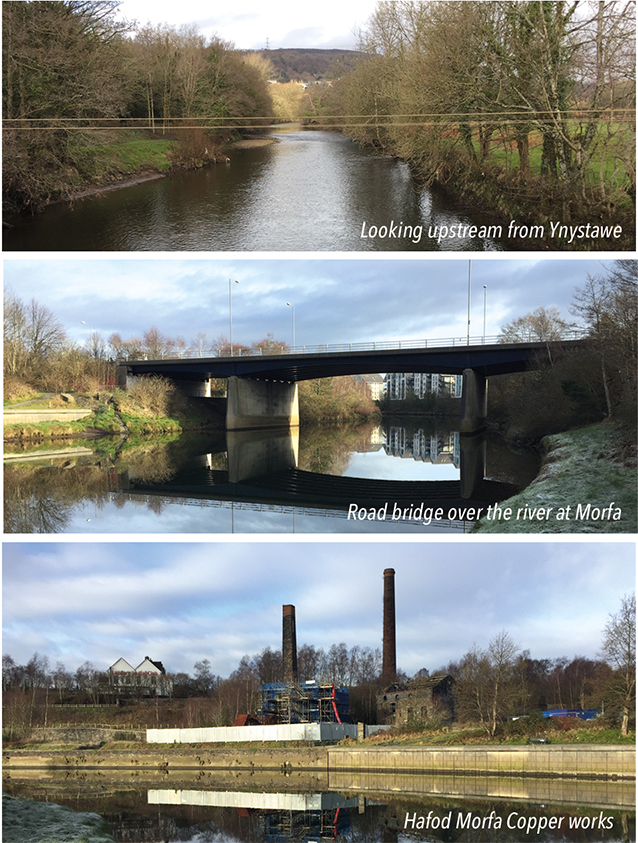 No, not the lyrics from a dodgy Chris Rea song, but a graphic description of the scene facing old Satan himself when he visited back in the 19th century. For this area, stretching roughly from Morriston and Llansamlet in the north to the edge of the city in the south, was one of the most heavily industrialised areas in the entire world. Famous for the production of copper of course, it was also home to a bewildering range of other industries including iron, steel and tin. There were 36 collieries, together with gold, silver, lead, brass and zinc works.

Swansea was a serious player on a worldwide scale with influences around the globe. Hell, we were Premiership before we even got to the Premiership! And why? A number of factors came together to play a part, amongst them the fact that the Tawe was navigable quite a way upstream allowing raw materials and finished products to be easily transported to and from the point of production.

Unfortunately, this didn’t last and when it all finally went tit’s-up the resultant industrial dereliction was on a, well, industrial scale. This tiny corner of South Wales was probably one of the most blighted areas in Western Europe, leaving a toxic and poisonous wasteland, devoid of vegetation with a heavily polluted river to boot. Imagine, the poor river had been minding its own business for millions of years only for man then to come along and royally bugger it all up. Happily, the problem was finally addressed in the 60s with a regeneration programme which, whilst massively successful, left little trace of this rich industrial heritage. (See this You Tube video https://youtu.be/BCT1rFB9weU).

And what must have been fascinating at the time was the contrast between that innocent young playful crystal-clear stream, born in the foothills of the Brecon Beacons, untouched by man, and that toxic polluted river whose condition was entirely caused by man. And whilst this walk interestingly illustrates that a contrast still exists, to a massively lesser extent of course, it’s because of our intervention in an act of redemption that its almost been returned to how nature intended. Give or take a supermarket trolley or two.

As the river approaches its final destination of Swansea Bay, it’s worth noting that its route was altered in the 18th century from its original path, where The Strand is today, when a new channel was cut (New Cut Road – geddit?) with the intention of making navigation easier and to create a new dock where Parc Tawe sits today. Then, finally as the river reaches the sea, we encounter the Tawe Barrage, undoubtedly the most significant man-made influence on the river of recent times, when it was impounded to create a large lake-like feature more in keeping with satisfying modern leisure pursuits than anything industrial. 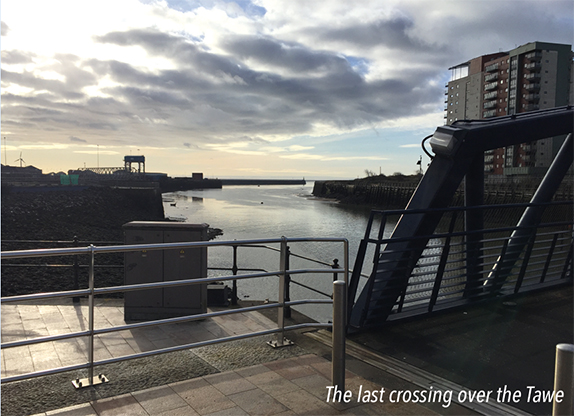 So, we’re almost done and if you’re a completist like me then you’ll carry on to the beach, so that you can smugly claim that to have ‘done the Tawe’; over 30 miles in length with a descent of over 500m, walking through a unique geological and historical timeline. And in so doing take your rightful place within the pantheon of great explorers and adventurers alongside the likes of David Livingstone, Henry Morton Stanley, Ranulph Fiennes and Derek Brockway.