Following up on the series of 7 core principles, I’d like to focus on Power and what it means in the context of exercise for people with PD. When we talk about power, we’re talking amplitude training, speed, and accuracy, which ultimately drive the strength and size of body movements. So how does this work? 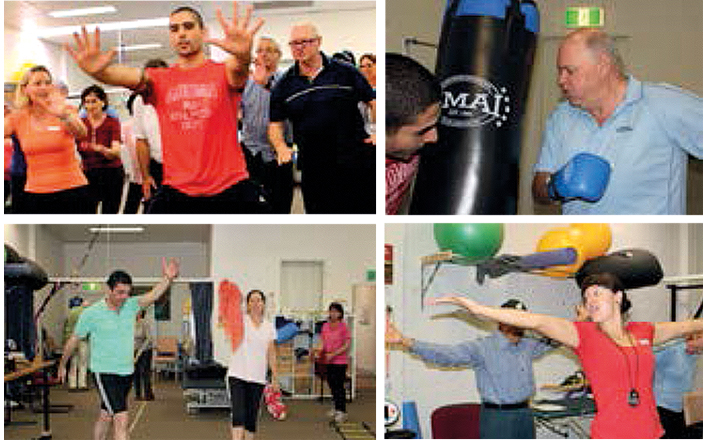 Farley and Koshland (2005) looked at the relationship of speed and amplitude as a rehabilitation strategy for people with PD, studying 18 subjects with mild to moderate symptoms. They were asked to do repetitive big movements (step and reach sideways, step and reach forward), paying close attention on ‘how big’ the movements feel for each subject. They were also asked to walk at different speeds – ‘everyday way’ and ‘as fast as possible’. The general observation was that when subjects were asked to do big movements, it was performed at greater speed than usual, and when asked to walk fast, it was done with bigger steps. This direct correlation of size/amplitude and speed could most likely be explained by the increased in muscle activation in anticipation of meeting the required force (power) to fulfill the task. Therefore, improvements in power generation can be achieved by either increasing speed or size/amplitude of movements.

The other major finding of this study was that improvements in size/amplitude and speed differed across disease severity, and the greatest improvement occurred with those who have the mildest symptoms. However, this study also highlighted that although the mildly impaired subjects have the potential for bigger and faster movements, they do not use their full capacity in everyday situations. In animal model studies, this pattern of early non-use suggests further risk of degeneration, which could also be applicable for people with PD.

Similar to exerting higher effort when exercising (i.e. increasing the effort you put into movement slightly higher than comfort zone), power can be generated through increase in speed and size beyond ‘usual’ way. To view an illustration of this concept, download the PD Warrior App (Apple/Android), where you will find video demonstrations of the 10 Core Exercises. You will notice the crisp, defined, and sharp movements that are consistent in all the 10 exercises, and these methods are covered and taught to clients during their induction program.

And finally… in May of this year, the PD Warrior 10 Week Challenge Group Class is coming to Swansea! This class will be open to clients who have completed the induction, so if you’re curious to know more, or would like to join the class, you know what to do! Come and join the global PD Warrior tribe, take control of your Parkinson’s, and live the life you deserve. I look forward to seeing you soon!

Farley, B. and Koshland, G. Training BIG to move faster: the application of the speed-amplitude relation as a rehabilitation strategy for people with Parkinson’s disease. Experimental Brain Research. 2005.