I’ve been trying my best to think of the words to describe the Hay Festival, but I think former American president Bill Clinton said it best when he called the annual gathering in Hay-on-Wye the “Woodstock of the mind.”

It’s still a few weeks away, but I’m already counting down the days until I make that scenic drive over the Brecon Beacons, zig-zagging past the sheep before parking in a field (weather gods permitting) to spend my time overloading on new things that I didn’t realise I needed to know.

Yet there’s one ritual that I dread each May – deciding which talks to go and see. This year’s brochure landed on my doorstep a few days ago, and with 100s of events to choose from, the 2019 offering more resembles an old fashioned Yellow Pages than a pamphlet for a literary festival.

Not that it’s all about the literature nowadays, and the get-together in the “Welsh town of books” has grown from being seen purely a haven for bibliophiles into one where authors take to the stage alongside politicians, comedians, musicians and scientists for a “meeting of the minds.”

For those who’ve never been before, the festival works on a ticket system with different prices and venues for each individual talk. For families, there’s a Hay Fever line-up of children’s events, which are often just as enjoyable as those for the grown-ups.

It’s also worth pointing out that entry to the festival itself is free, and there’s more than enough going on to fill a few hours without splashing the cash. There’s the book shops, of course, which include a huge Oxfam tent full of bargains, along with plenty of quirky little boutique stores offering everything from “upscaled” clothing (OK, fancy second hand clothes) to some unique arts and crafts. Then there’s the gigantic food and drink tent and bars dotted around the place and, if you’re quick, a programme of free ticketed events, such as those offered by the BBC, which can get snapped up pretty swiftly.

Among those appearing this year are TV stars Maxine Peake and Joanna Lumley, authors Ian McEwan and Jeanette Winterson, and comedians Jimmy Carr and Bill Bailey. With so much to choose from, here’s five highlights which might tempt you to Hay-on-Wye this May Bank Holiday week:

The Hay festival president is always good value for money, whatever subject he chooses to tackle. This year he’ll be turning his attention to ancient Greece, and reading tales from his books Mythos: The Greek Myths Retold and Heroes: Mortals and Monsters, Quests and Adventures. 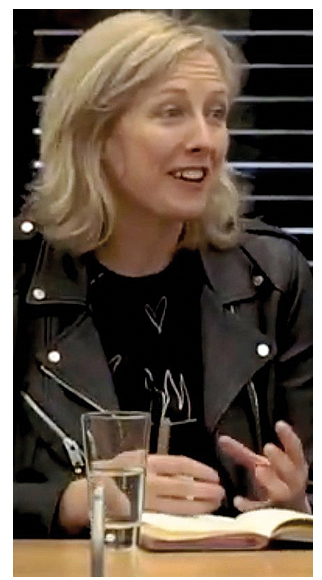 Fry events are always busy affairs, but this year he is only doing one talk as things stand, so expect tickets to go extra fast.

Wales’ very own Orwell Prize-winning journalist will be talking about the importance of investigative journalism in this age of “fake news”. Topics will include her research into the EU Referendum and the American Presidential Election.

ine the end of an era in the late 1990s. The second volume of his memories talks about the excesses of those years, which included hanging out with the likes of David Bowie and Lou Reed until, as the title suggests, it fell apart.

TV art historian Simon Schama revisits his book Rembrandt’s Eyes, first published 20 years ago, to mark 350 year since the death of Dutch old master Rembrandt van Rijn. He might have died in poverty, but not obscurity, and his work continues to move people to this day.

The Five: The Untold Lives of the Women Killed by

We’ve all heard countless theories surrounding the true identity of the notorious Victorian serial killer Jack the Ripper. But what of his victims? In her ground-breaking book The Five, historian Hallie Rubenhold shines a light on the five women forgotten by history and offers a much more fascinating tale than yet another conspiracy theory.

* The Hay Festival runs in Hay-on-Wye from Thursday May 23 until Sunday June 2.