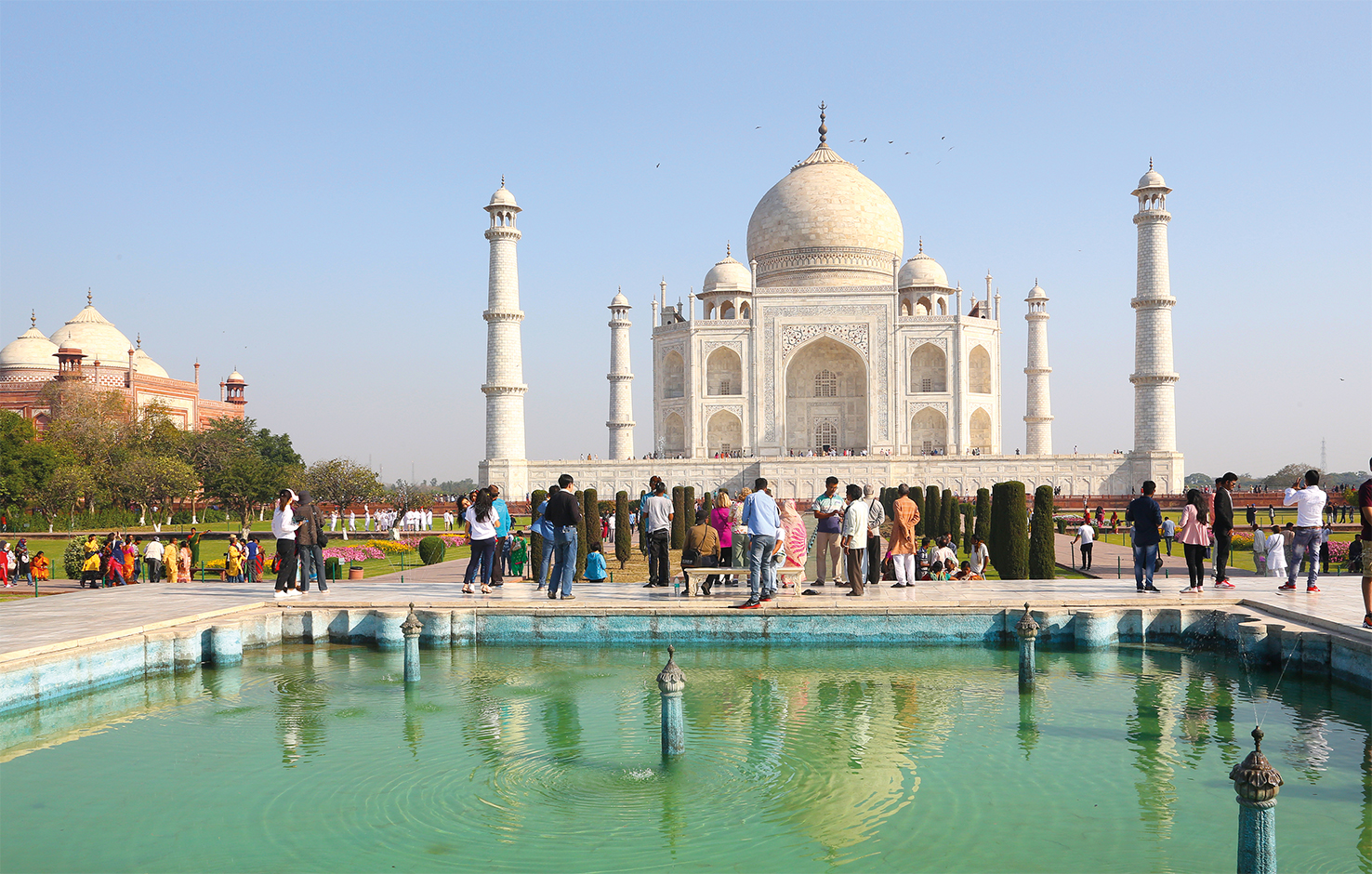 Liz Barry has just returned from a two-month trip to India, in her final weeks there she stopped off to revisit one of the most famous buildings in the world, the Taj Mahal. Here are some of the highlights that will be included in her photography tour in October

On the banks of the Yamuna River in northern India’s state of Uttar Pradesh sits the historical city of Agra, famous for its Mughal architecture and the pristine white shrine crafted by thousands of hands in the name of love. The Taj Mahal is an iconic monument which will leave you spellbound from the very first glimpse. 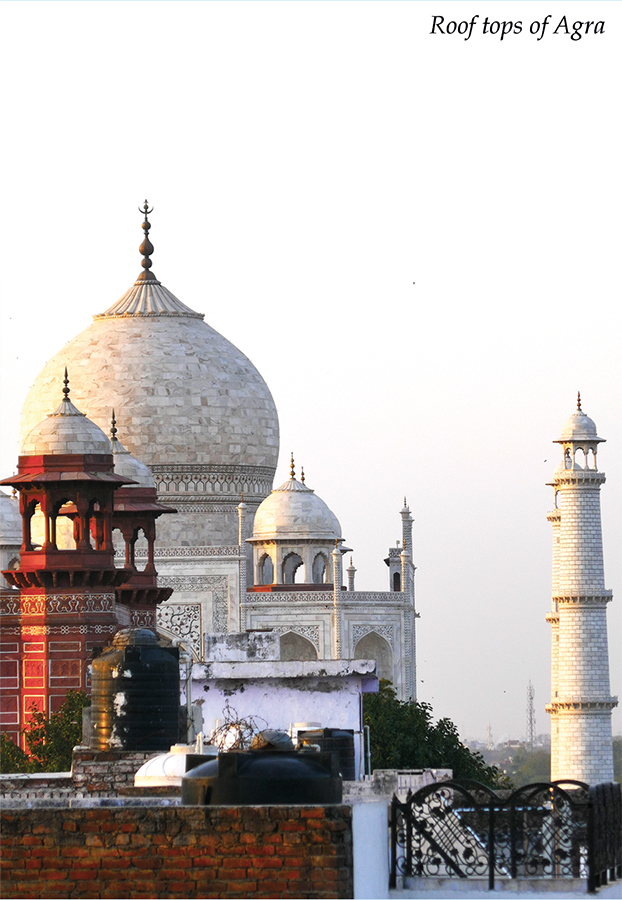 A Unesco World Heritage site since 1983 the Taj Mahal is synonymous with devotion; built by the Mughal Emperor Shah Jahan after his favourite wife Arjumand Banu Begum also known as Mumtaz Mahal died in 1631 after giving birth to their 14th child a daughter named Gauhara Begum. It is said that from her death bed she asked her husband to build a beautiful tomb. With his position of wealth and also the passion Shan Jahan felt for his wife, the promise became a reality.

From across India and as far away as Turkey and Iraq over 20,000 stone carvers, masons and artists were brought to this peaceful site he chose on the southern edge of the city, here they laboured for seventeen years from 1631 until 1648 alongside a team of the finest architects.

I arrived in Agra and spoke to a local tour guide who told me that the East Gate had seen shorter queues recently, so with this insider knowledge I found myself just before sunrise standing with fellow travellers outside the high walls which enclose the gardens and walkways of this treasure.

We entered as the night was ebbing away and the outline of the Taj Mahal slowly emerged through the grey light of dawn. Although this wasn’t my first visit having walked these same paths 20 years before, I still held my breath transfixed by the mesmerising sight before me. I stood alongside other tourists, cameras and phones in hand all vying for a space to capture this moment. 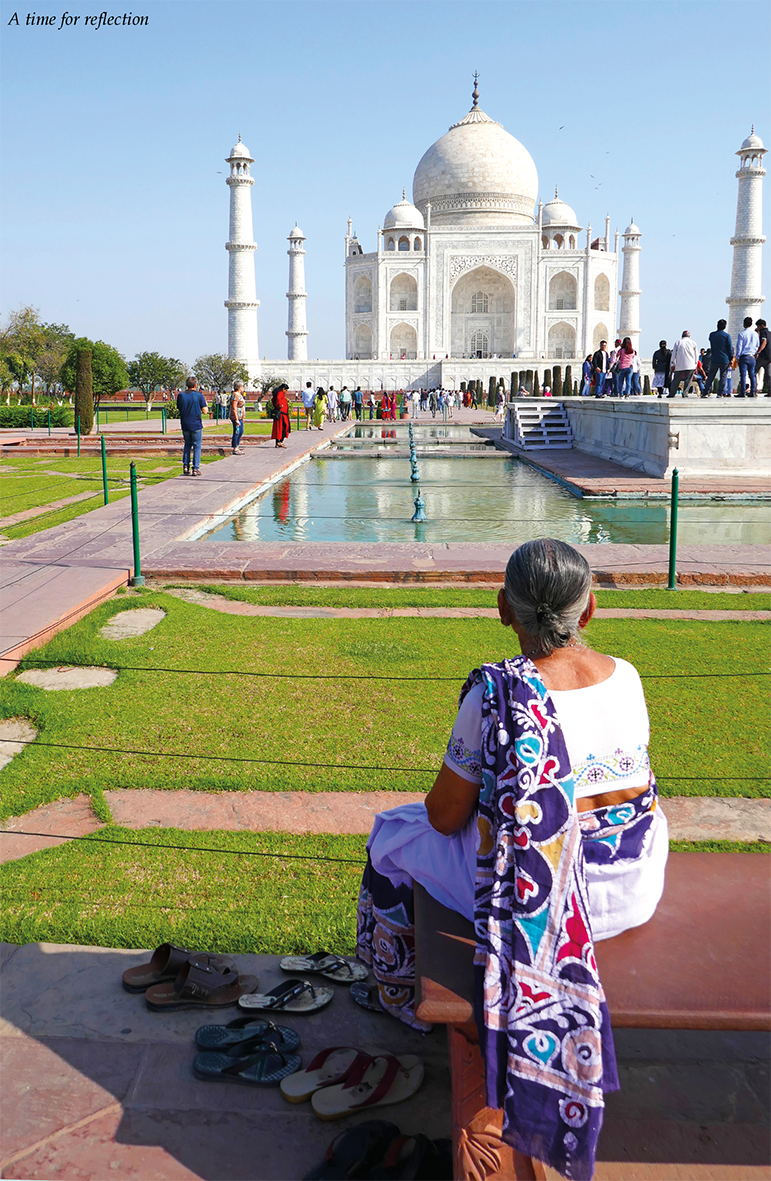 The Taj Mahal is a marvel of Mughal architecture, a coming together of Islamic, Iranian, Persian and Indian styles comprising of gracefully curved archways and soaring domes. Four delicate minarets edge the imposing main building created out of intricately carved white marble inlaid with precious stones.

A mausoleum preserves the memory of the deceased; housed in the basement of the tomb are replicas of the original graves of Shah Jahan and his beloved wife Mumtaz Mahal (meaning ‘jewel of the palace’) a nickname given by her husband which is befitting as the Taj Mahal is a monument dedicated to eternal love by an Emperor for his Queen.

Walking throughout the tree lined complex and manicured gardens the atmosphere is tranquil; you just want to sit on a bench or stone step and gaze in wonder, alone with your thoughts

Today, the white stone bench where many years before Princess Diana sat alone is still sought out as a photo spot and people wait patiently to recreate that pose. 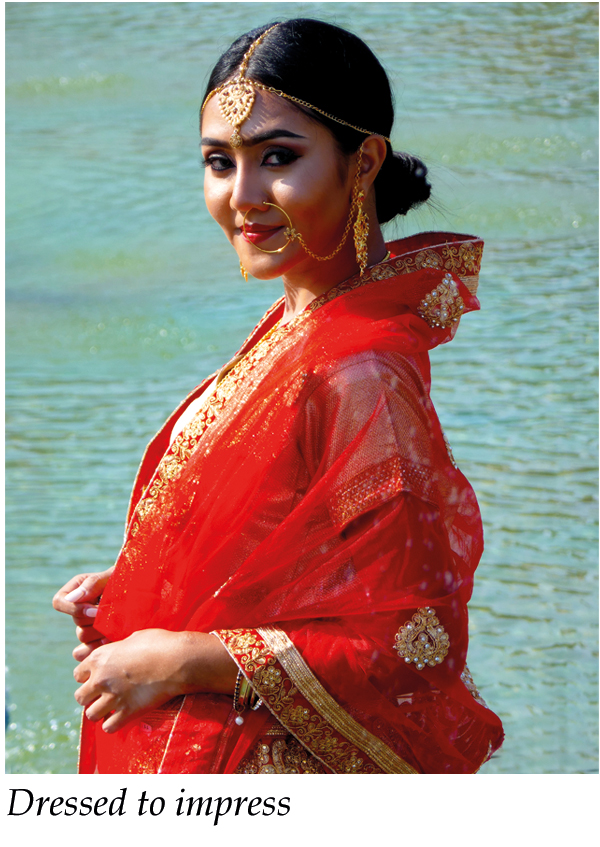 Indian families are so pleased to see visitors from other countries that they want you to be in their photographs, so in between taking my own photos I was often asked to pose, even handed small babies and children, which is certainly an honour, though I wonder as they get older what they will make of this fair-haired stranger in their family snaps.

Though the Taj Mahal can be visited on a day trip from Delhi as a new highway speeds up the journey time to under 3 hours, it is well worth staying overnight to visit the Baby Taj and Agra Fort.

The Baby Taj or Tomb of I’timād-ud-Daulah is also a Mughal mausoleum said to be the inspiration behind the Taj Mahal, built for Mizra Ghiyas Beg grandfather of Mumtaz Mahal. It was the first structure to be built on the river completely out of marble with pietra dura inlay, the art of using highly-polished and cut stones, hence the reason it is known locally as the Jewel Box. A smaller complex with gardens, water courses and fewer tourists makes it a place worth visiting if you have the time. 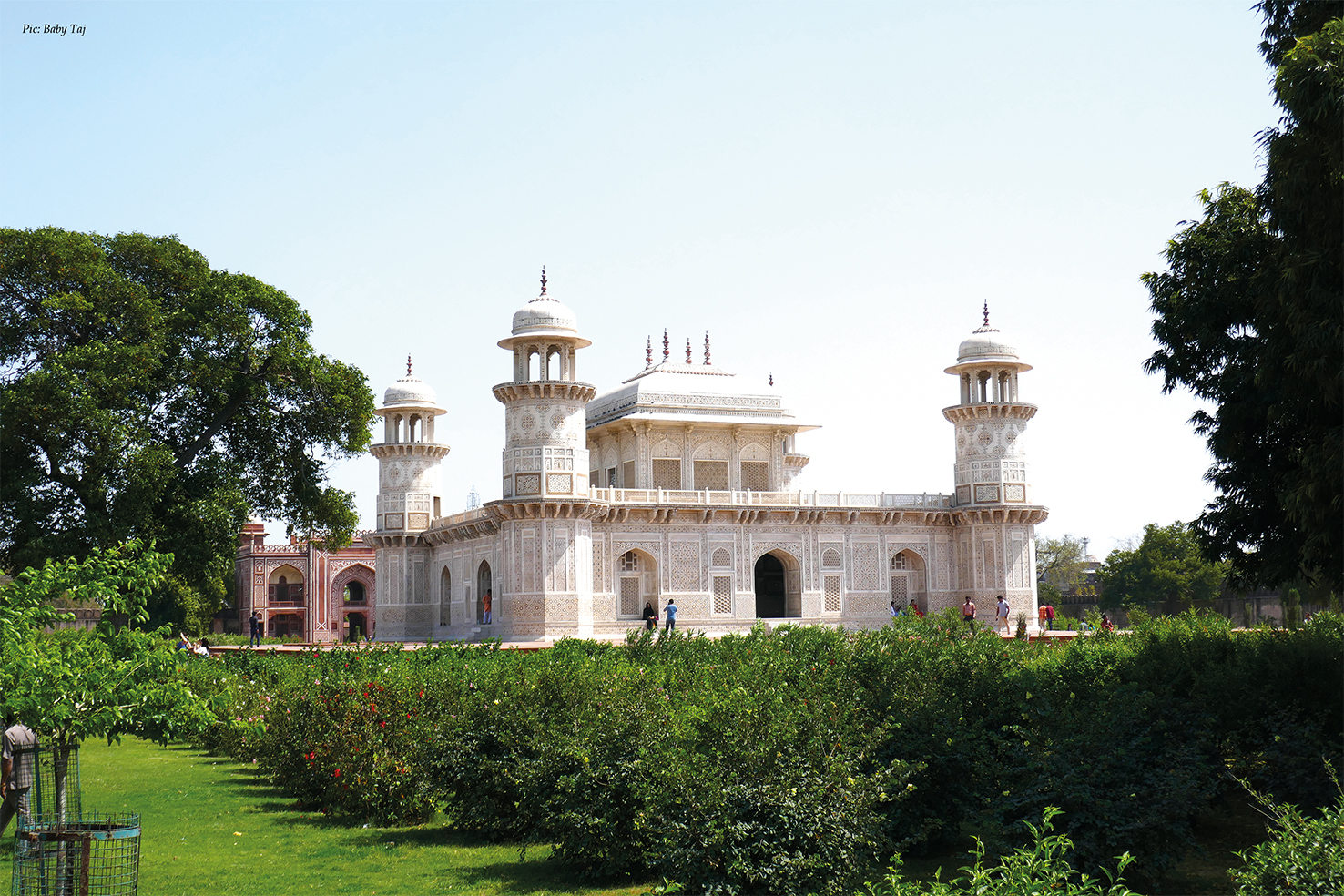 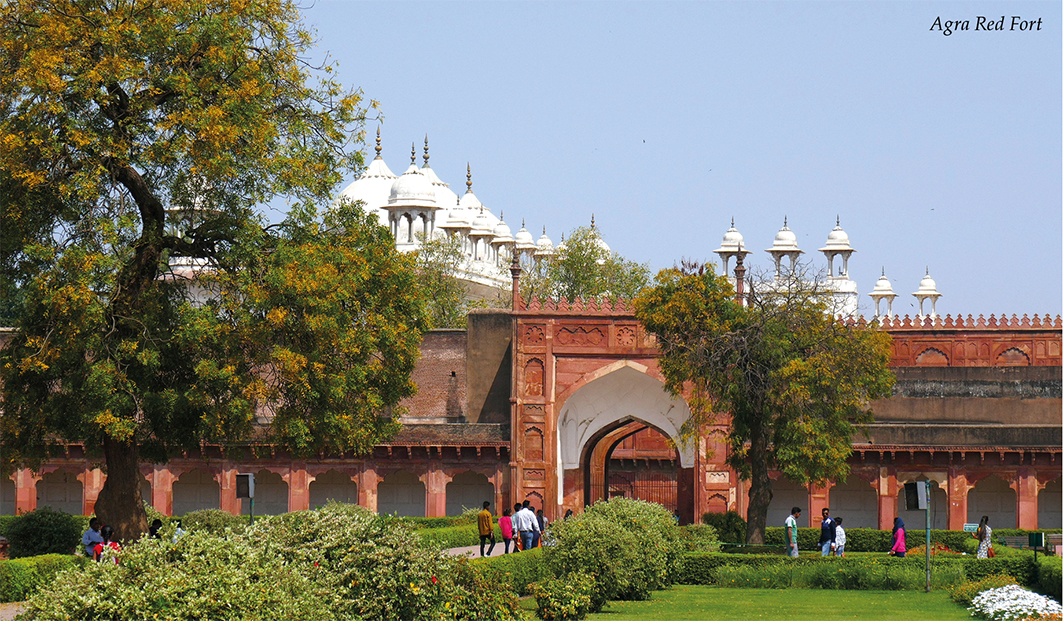 Agra Fort also known as the Red Fort is an impressive 16th century fortress of red sandstone, created as both a military base and a royal residence. From here four generations of emperors ruled.

Shah Jahan transformed the fort into a palace and lived here with his beloved wife Mumtaz Mahal. In a twist of fate, it then became his prison when he was confined in an octagonal tower by his son Aurangzeb, who seized power in 1658. 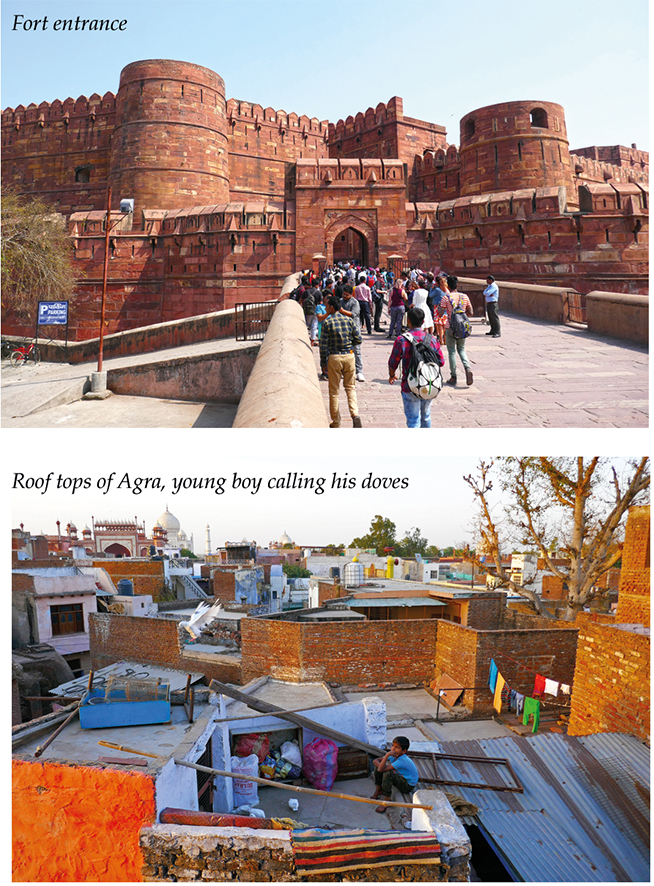 The fort’s dark red walls contrast with the green lawns and white marble rooms with ornamental ceilings, floral inlay, alcoves and fountains. The trellis windows offer a glimpse of the Taj Mahal from a very different perspective from across the river.

It became my ritual to end each day at a locally owned rooftop bar or restaurant; from here I watched grandfathers scatter grain to entice their pigeons back to their coups, children flying kites and graceful figures collecting their washing, whilst along the streets below fathers led sons to the mosque answering the call to prayer.

Online tickets for the Taj Mahal are available at the www.tajmahal.gov.in website 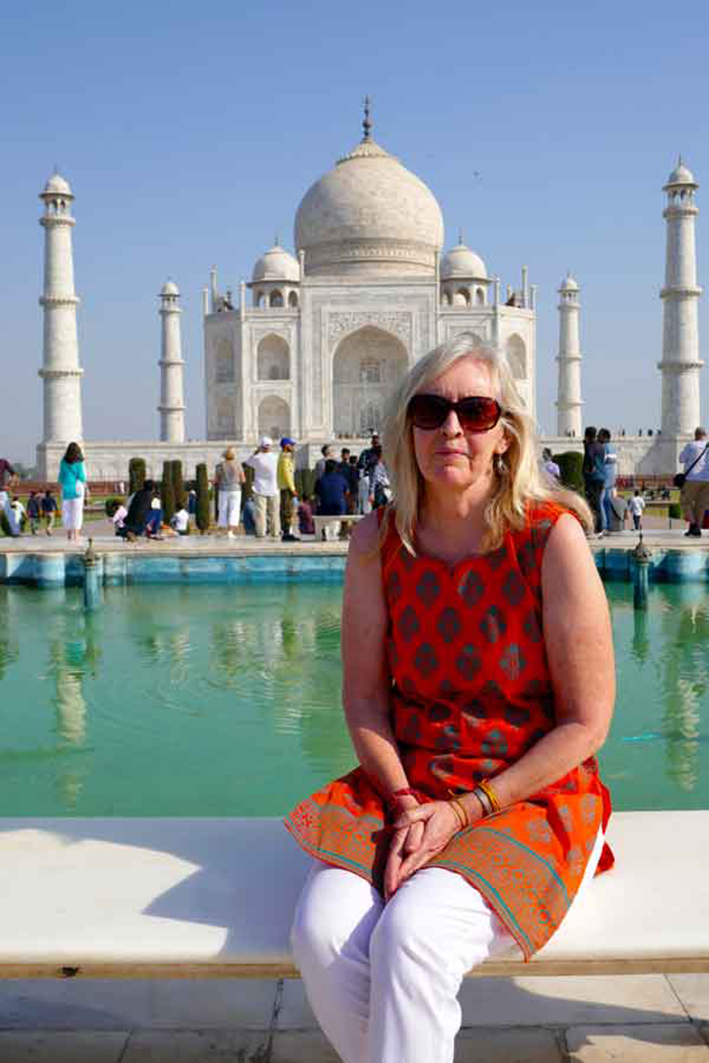 LIZ BARRY has teamed up with NEI UK for an exciting travel photography opportunity in October 2019.

Liz is a freelance professional photographer whose background lies in documentary photography. Her career began in New York and since then she has travelled extensively world-wide. When she is not travelling, she loves to spend time in Swansea and Gower capturing the beauty of the beaches and surrounding landscape.

Liz has been a tutor for more than a decade, teaching through work-shops, classes and individuals. Her images have appeared internationally in newspapers, magazines, travel guides, books and exhibitions. Liz has

just returned from a two-month trip to Mumbai where she taught at an international film school in the heart of Bollywood.

In 2009 a chance meeting at a business networking group started an association with Bay that has continued to this day. Liz has contributed a huge number of travel articles covering destinations from Japan to Canada and plenty of places in between. Liz’s attention to detail is remarkable; she manages to capture the very essence and spirit of a location in her photographs of people and places. Aside from being a consummate professional, she is a joy to be with – always ready to have fun and up for a challenge. 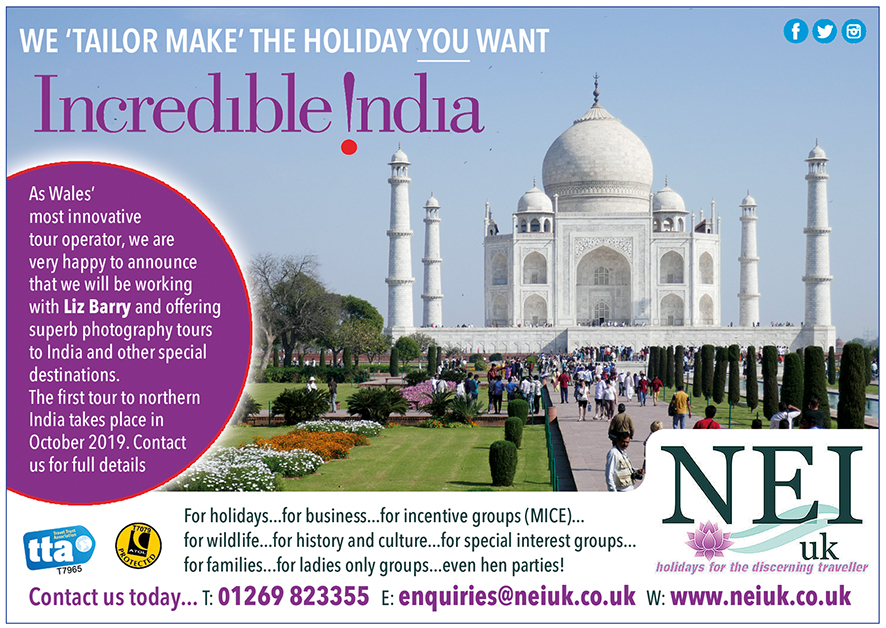