Liz isn’t happy the way she looks – but her self-image definitely needs working on. Thankfully she won’t be going under the knife – beauty is skin deep and the people who are important to her know that real beauty comes from the heart

‘Oh!’ I’d caught a glimpse of something out of the corner of my eye. ‘What’s that?’

I peered to my left again. It was still there. What on earth was it? Then it suddenly dawned on me: ‘Oh my gosh, it’s my eyelid.’

As you age you know to expect certain things, specific changes, to happen; things like your hair going grey or your eyesight getting worse. What you don’t expect are things you didn’t even know were ‘things’. Like your eyelids starting to sag. I’m going to have to add them to my growing list of ‘things I’d have lifted if it weren’t so vain/expensive/possibly dangerous’. 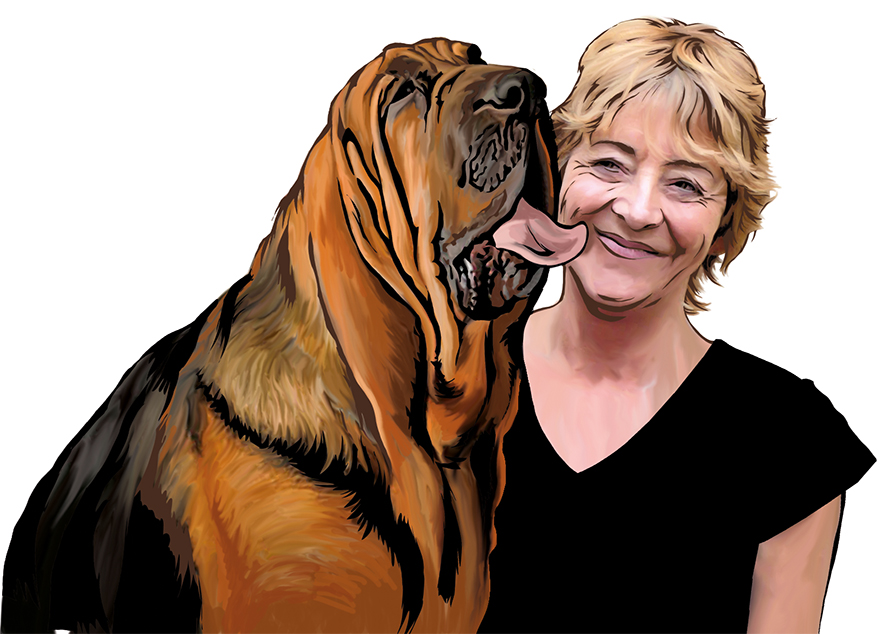 On a bad day – most days – between my sagging eyelids, my jaw-reaching eye-bags, and my jowls I bear a stronger resemblance to a bloodhound than a human. In fact, given that my nose has  started to do strange things too I could well be metamorphosing into a dog. As long as I don’t start sniffing dogs’ bottoms …

The best example of metamorphosis that I know of in nature is the caterpillar to butterfly wonder. A cute although not necessarily adorable critter goes to sleep for a bit and wakes up one day as a stunningly beautiful creature of flight.

I, on the other hand, spend a lifetime ignoring beauty tips and wake up one day as a dog.

A dog who could definitely do with some skin toning advice.

Really? Is that fair?

Of all the things I could have spent the last sixty years of my life turning into.

A prize-winning author, a generous – and anonymous – philanthropist, a world-renowned academic, a scientist who discovers the cure for cancer, none of the above.

But does it matter if I bear a striking resemblance to a dog?

It shouldn’t. But like many women – and men – I am influenced by the lies put out by the media that I can only be loved if I am skinny, youthful, and sexy.

A friend, someone for whom I have great respect and admiration, is a popular public speaker, and she recently wrote about the shame she feels if she wears the same clothes more than once for her engagements. She described it as listening to the wrong voices.

I don’t do much public speaking so don’t have that particular problem, but I am listening to the wrong voices. The voices that tell me my value depends on how I look.

I choose not to think too closely about the reasons why I care so much for people’s opinions of me because I suspect that would upset me even more, but I know there is still a lot of work to be done on me. And not just of the plastic surgery variety. It’s not my outward appearance that needs to change as much as the inside of my head.

No, the transformation that I really need can’t be achieved in a beauty salon or by a surgeon’s knife.  It’s a change of mind-set that says I refuse to believe the propaganda spread by the media that my value depends on my appearance. That’s not what my creator says about me. I am precious and loved as I am. The Bible tells us that while people look at the outward appearance God looks at the heart.

The most famous example of a changed person in the Bible is Saul, a persecutor of Christians, who, virtually overnight, became Paul, one of the great-est advocates for Christ, but even he wrote, ‘I do not under-stand what I do. For what I want to do I do not do, but what I hate I do.’ Don’t we all feel like that on occasion? I’m not that fond of Paul but, give him his due, he is honest about life’s struggles.

In Zac’s – and in other churches – we do see people change but usually it’s a very slow process not an overnight success story.

Because change takes time; and we are all works in progress. But wouldn’t it be nice if we could just go to sleep and wake up one day perfect in every respect? But then again …

The yucca caterpillar can live for up to thirty years before going underground to form a pupa. It may stay there for a year before transforming and then – wait for it –it doesn’t have mouth parts because they’re not needed: the yucca moth’s life is so short it doesn’t have to eat. Where’s the fun in that?

Now I come to think about it, who wants to be a butterfly anyway? Much better to be a hairy, slobbery bloodhound who enjoys her food and loves to laugh with her family – which explains the lines around my eyes, the flab around my hips, and the stains on my jumper.