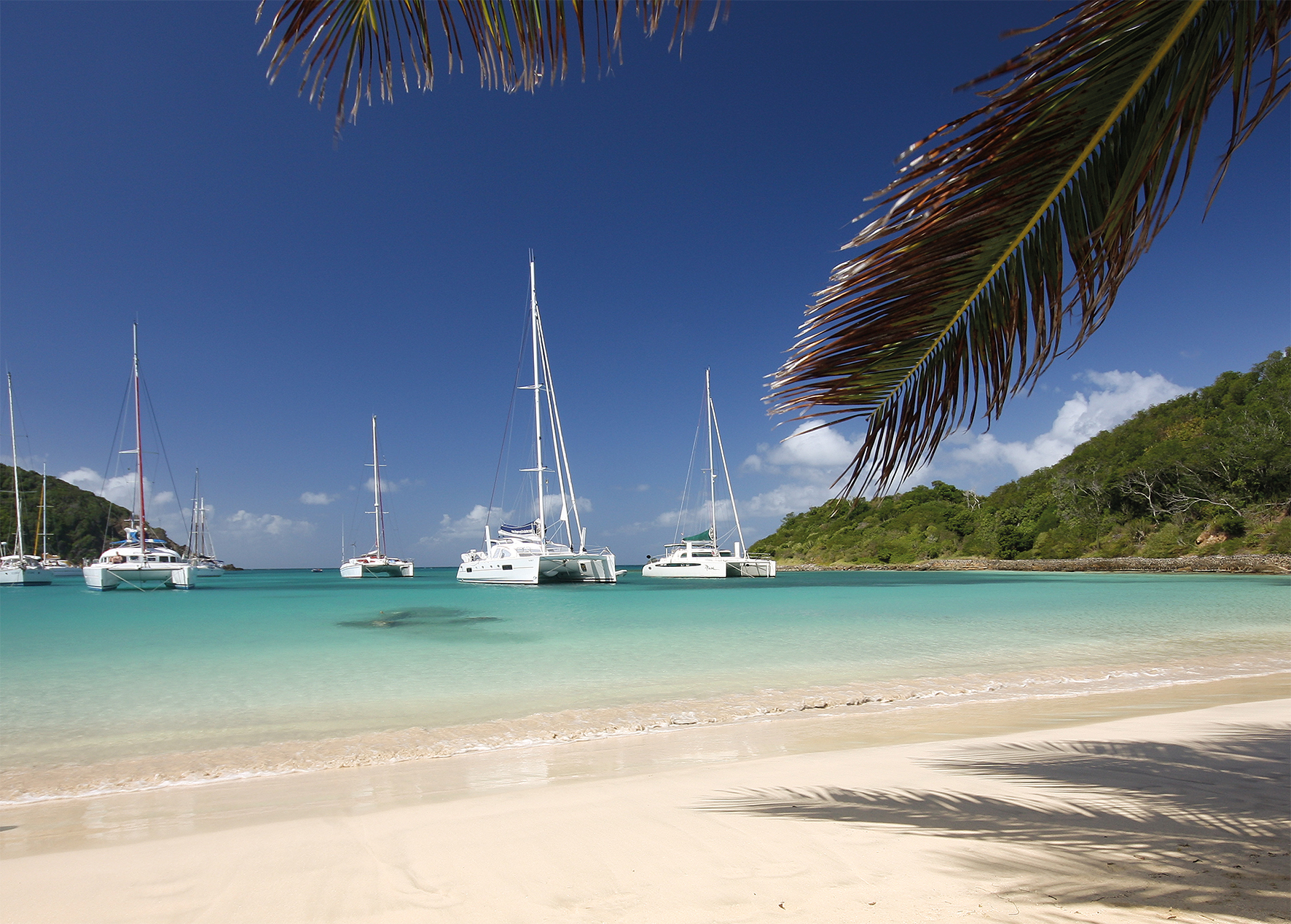 Cobalt blue sky, turquiose sea and pale yellow sand – the classic brochure image of the Caribbean’s west coast. But over on the east, it’s a different picture altogether

This month we’re off to the far-flung Caribbean island paradise of St Vincent and the Grenadines. Dominated by a huge volcano, it is probably best known for being the setting for the Pirates of the Caribbean movies. Unlike its busy neighbours, St Vincent is an unspoilt haven of peace and quiet where there’s plenty of adventure to be found. Bay’s NICK SMITH went in search of one of the last desert islands…

It’s a long hard slog to the top of La Soufrière. The heat is relentless, the humidity is oppressive, and the mosquitoes are soul-destroying. As we hack along the steep forest track, ever upwards, sliding on thick sticky mud, the stench of sulphur and rotting tropical vegetation makes breathing difficult and we stop frequently to catch our breath. Hiking to the summit of the highest peak in St Vincent and the Grenadines isn’t a walk in the park for sure, but after four grueling hours we emerge above the tree-line and we finally see the summit in the clouds. In the cool mountain breeze that has replaced the foetid atmosphere of the forest canopy we sprint the last few hundred yards to the rim of a gigantic crater. Exhausted, I don’t even look at the view and just drink from my water bottle as quickly and as deeply as I can. “Leave some for the way down,” says my guide Viv Richards. “It’s harder going back down. It takes longer and is more dangerous.” After a few minutes I’ve recovered sufficiently to see that whatever view there might have been – I’d been assured it was going to be the “best in the world” – the cloud had closed in completely and my camera stayed in its bag. 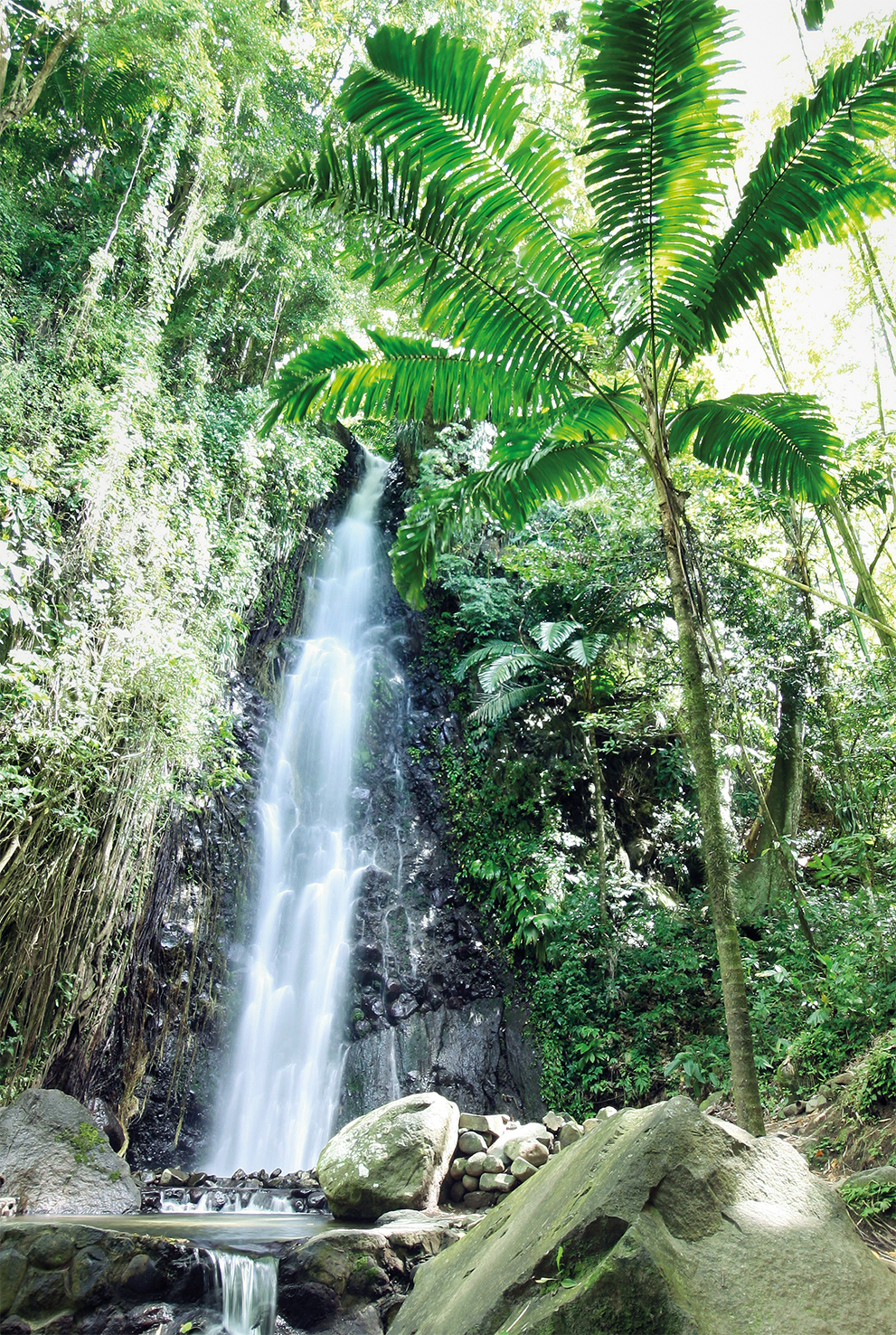 The trail up St Vincent’s highest mountain, the La Soufrière volcano, is choked with tropical forest vegetation. But in a clearing I found this fantastic waterfall pouring out of the basalt cliff faces

On a clearer day, Viv Richards tells me, from the top of La Soufrière you can see water in all directions. To the west, the tranquil Caribbean Sea gently laps the island’s leeward coastline with its untold number of brilliant white yachts bobbing at anchor in the turquoise waters. To the east, furious steel-grey Atlantic rollers pound the deserted windward shore.

In between, there is this tiny emerald green island that, even if you include the outlying chain of islets that make up the Grenadines – the country is officially both St Vincent and the Grenadines – is only twice the size of Gower. There’s hardly a scrap of level land here, as we’re standing on an active volcano that launches itself from the seabed to an easily remembered height of 1,234 metres (that’s a lot higher than Snowdon). To get that much mountain on to such a small area of land, it’s got to be steep. In fact, it’s vertiginous. Tumbling back down La Soufrière in the mist, we are stung, cut, bitten and bruised. And although it hasn’t erupted since Good Friday 1979, it’s a relief to get back to something more recognisable as the Caribbean of banana plantations, tropical gardens and white coral strands where a few intrepid holiday makers and honey-mooners sunbathe listening to their ipods, drinking cocktails or reading out-of-date copies of the British newspapers. 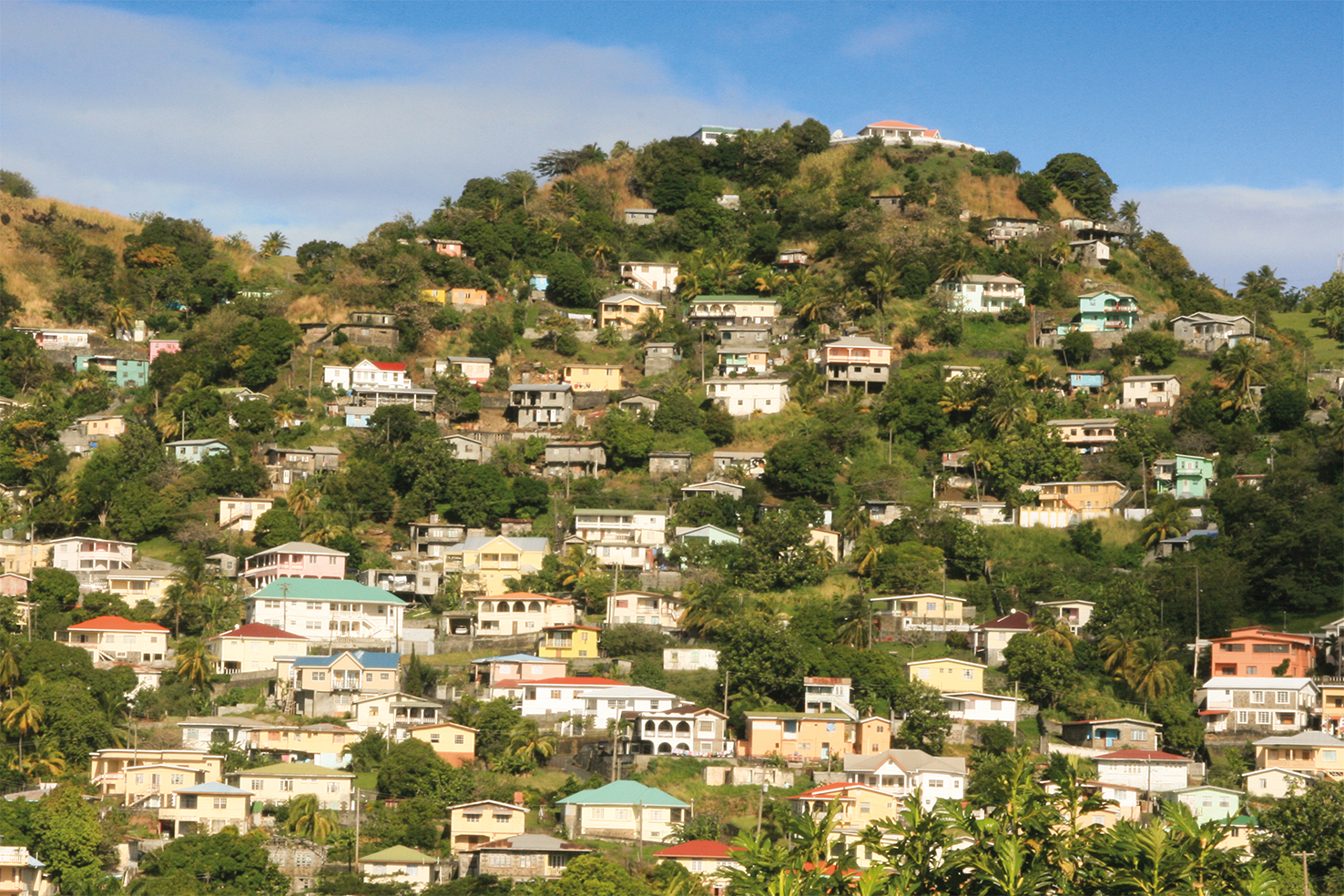 In the ‘suburbs’ of Kingstown ‘saltbox’ houses are crammed onto the hillsides, all facing south, all overlooking the sea

Because St Vincent is still relatively unknown as a mass tourism destination, unlike nearby Barbados or Grenada, it is still authentically Caribbean in that the coast isn’t yet splattered with luxury hotels and golf courses. The country’s capital, Kingstown, is still dominated by 19th century architecture from the British colonial era, the best example of which is the Cathedral of the Assumption that with its Gothic Revival, Moorish and byzantine influences is by far the most striking building on the island. Step inside and you’ll see an extraordinary stained-glass window in which both Jesus and Mary are shown wearing red robes. Local legend has it that the wi 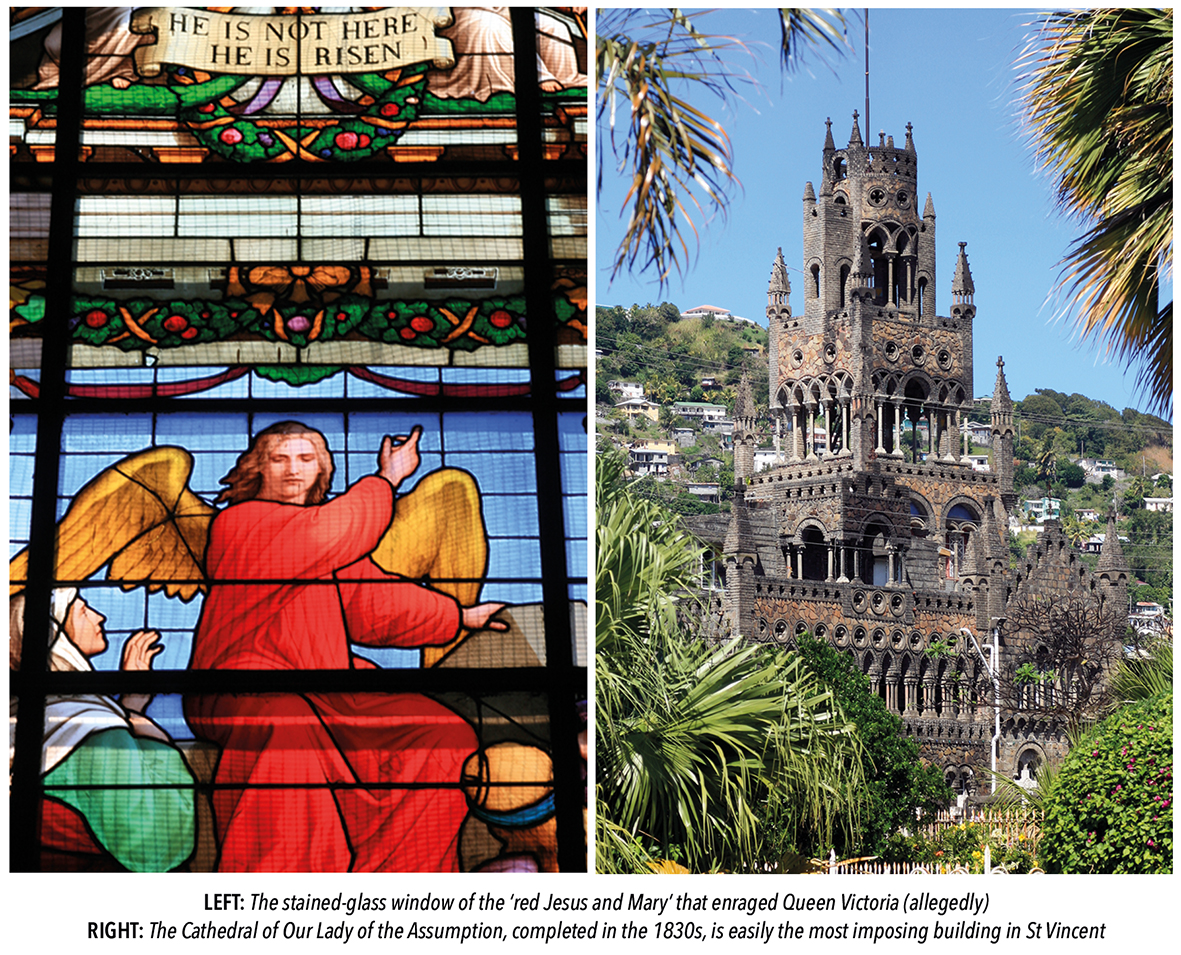 ndow was intended for an important church in London as a gift for Queen Victoria, but upon seeing Mary clad in red (rather than the traditional blue), the monarch was so outraged that she ordered it to be taken to the farthest reaches of Empire, where she would never have to look at it again. In the city itself there are venetian-style colonnades crumbling in the sun, while in the outskirts there are deserted sugar factories that remind the visitor that in this part of the world you’re never far away from rum. As you drive out of town the hillsides are sprinkled with traditional ‘saltbox’ houses that pepper the steep hillsides. Vincentians are famous for their gardens and it is easy to see why. Every house overlooks the sea and everywhere there are tropical flowers.

Although I can’t quite remember why, I was sent to St Vincent by Country Life magazine, the editor of which wanted me to come up with a pictorial feature on ‘island hopping’ for the green wellie, labrador and Land Rover brigade, who I can only assume like that sort of thing. Not being especially familiar with what ‘island hopping’ actually is, I sat down with Viv Richards on my first evening and entered into a long discussion over several cold glasses of Red Stripe beer and groaning plates of freshly caught tuna and mahi-mahi: the outcome of which was that he’d get his brother-in-law’s cousin’s neighbour’s friend to fix me up with a yacht captain who’d take me for a spin around the many picturesque 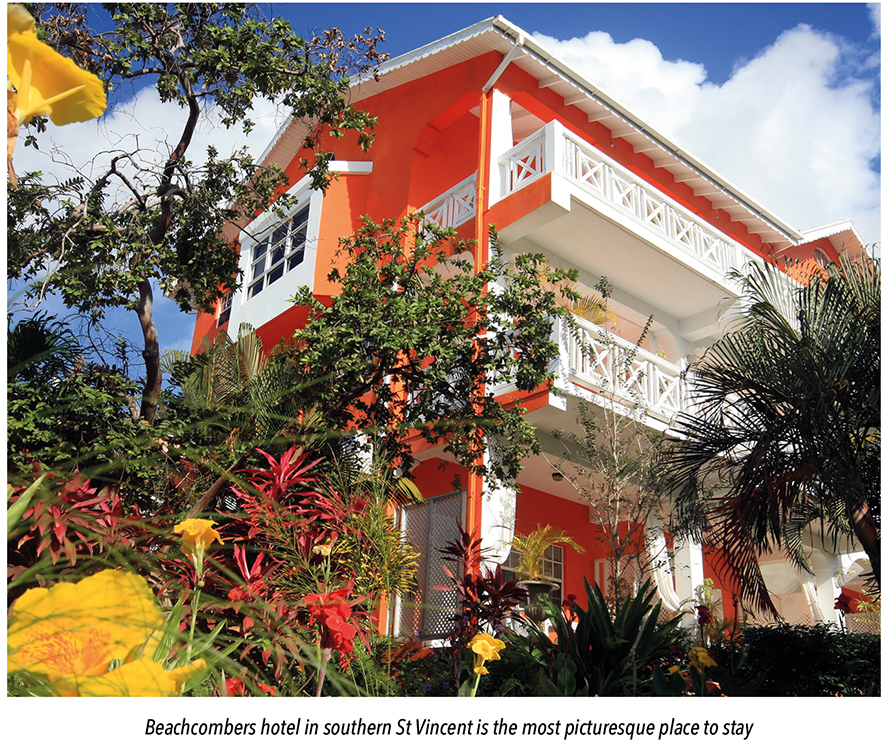 islands that form the southern necklace of the Grenadines. My base for this expedition would be the Beachcombers seafront hotel, that Viv Richards assured me was “the best in St Vincent”. And although I quite frankly barely believed a word he said to me during my time on the island (I especially doubted his name), Beachcombers was a lovely collection of old houses painted in orange and yellow, bright blue and purple, set in an exquisite garden of coconut palms, bougainvillea and heliconia. There was a path that led to the beach where the most popular pastime of the local teenage boys seemed to be impressing the local teenage girls by playing ‘keepie-uppie’ in the sea as the sun set behind them. Over the water, we could see Young Island, which I was told is very fancy and is where all the movie stars stayed while filming Pirates of

the Caribbean. It seemed rude not to accept Viv Richards’s invitation to take a look at the bay where Johnny Depp casually steps onto a jetty from a sinking boat. To my surprise, all of the specially-built sets are still where the film crew left them. The ‘buildings’ are all made of fibreglass, and if you peer through the windows, you can see boxes of rubbish, abandoned props and empty beer cans. 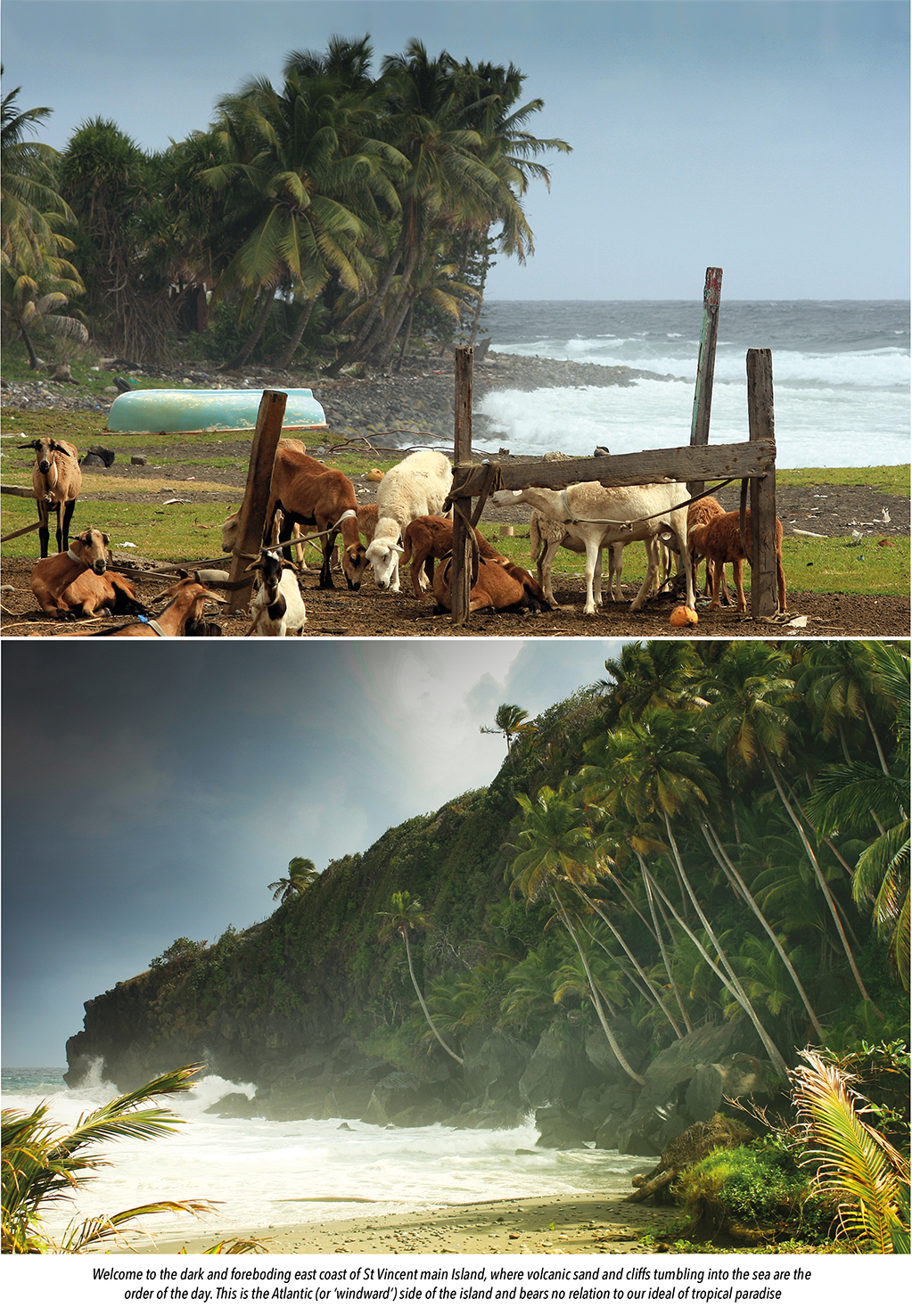 The following morning I got up early for my sea voyage. But as ever in the Caribbean, even the best-laid plans disintegrate into vague suggestions, as Viv Richards decided that one of the most important aspects of getting to know the island (of which he was comically proud) was to have a traditional ‘Vincy’ breakfast. This involved whisking me off to Grenadine House, where we feasted on huge slabs of breadfruit and smoky salt cod in peppers and spices, all on a balcony with a sign informing us that “gentlemen are requested to wear a shirt with a collar.” After which, we went to Fort Charlotte that is both a women’s prison and a museum. Eventually we set sail south, with my guide telling me the story of how Christopher Columbus discovered the island on 22nd January 1498 and, it being St Vincent’s Day, decided to stretch his place-naming skills no further. The bread-fruit we’d eaten for breakfast, he told me, was a descendant of the original breadfruit trees brought to the island in the 18th century by Captain Bligh of the Bounty. The trees themselves can be seen at the impressive Botanic Gardens 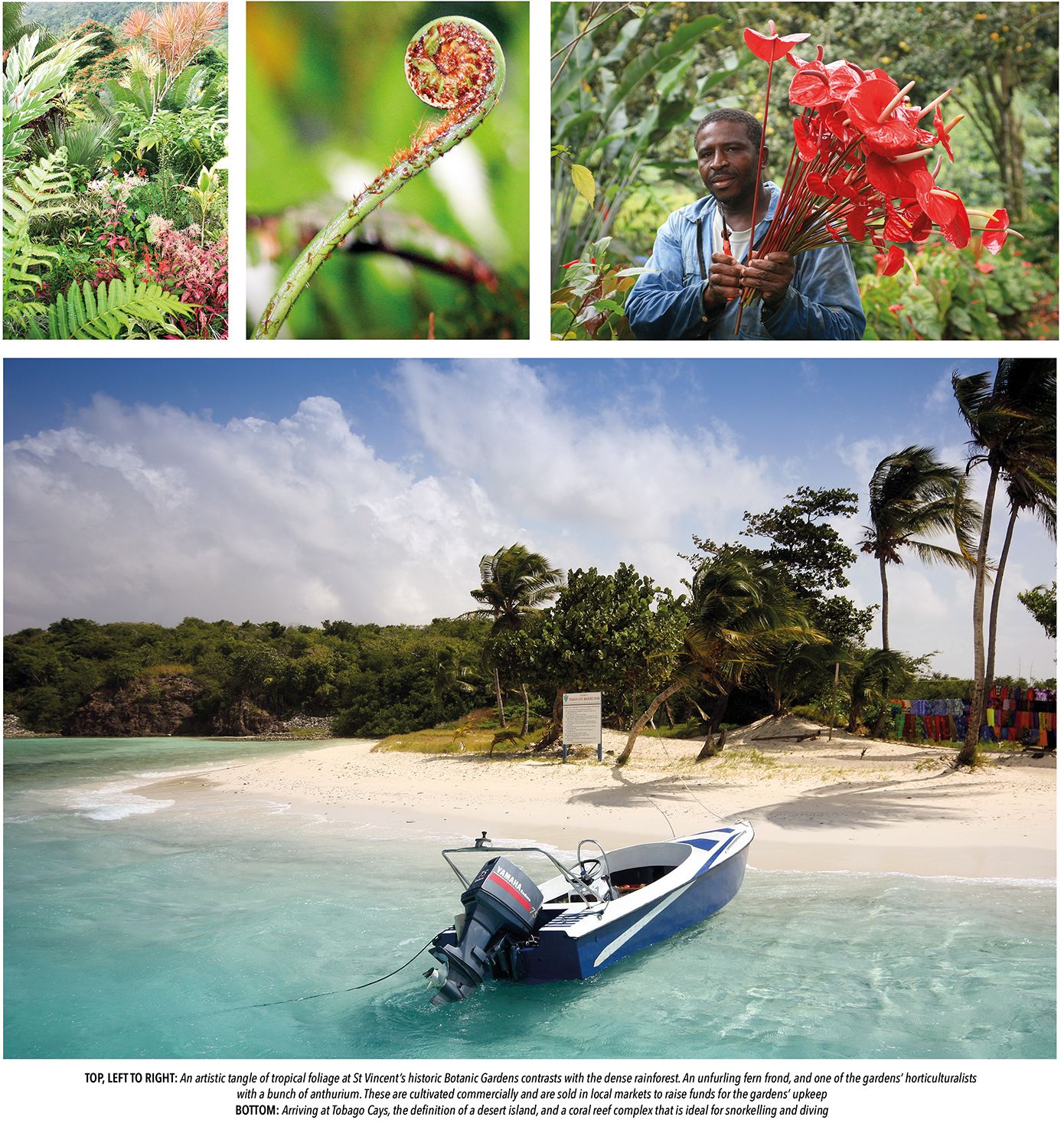 that are the oldest in the world (beating Kew by 75 years), and inevitably ‘the best’. When I later visited the gardens, located in the fantastically named highlands of Mesopotamia in the Montreal rainforest, I was happy to accept, as I looked over a blaze of ginger lilies, oleander and frangipani, that Viv Richards had a point, even if he was prone to being a little over-enthusiastic. 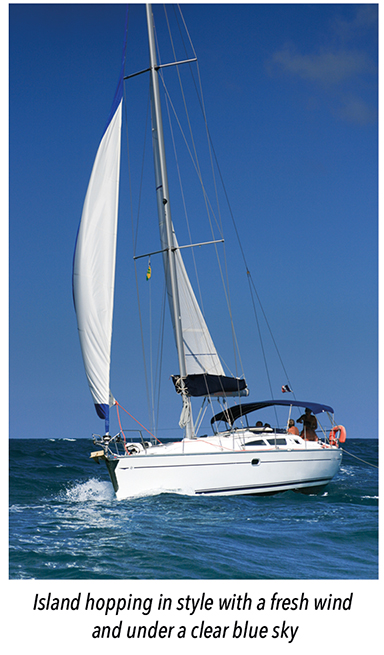 Back on board our yacht, we sailed, and we sailed, and we sailed. We dropped anchor at Tobago Cays, five tiny uninhabited islands that feature in the Pirates films, where we snorkeled and caught fish. We stepped ashore at Petit St Vincent, Mustique, Canouan, Palm Island, and Mayreau, all the time hoping that I was in fact doing what my editor had asked me to do. It certainly felt like ‘island hopping’ to me. As I photographed perfectly semicircular bays with perfectly pale yellow coral sand and artistically arranged palm fronds,

I really thought that this was indeed the life (although on balance I preferred scrambling up the volcano, an experience that seemed to be in the distant past). We wandered through markets selling beads, t-shirts and rum punch. As I embraced island life in all its aspects, I came across a beach shack where for a few dollars you could have your hair braided. And while I’m the sort of traveler who’ll try most things once, this didn’t seem to fit into that category and so I made my excuses, got back on the yacht and headed to the famous island of Bequia, where I strolled along Princess Margaret Beach, visited a turtle sanctuary and saw the remnants of a rusty old Egyptian space satellite that had evidently fallen out of orbit and landed nearby. 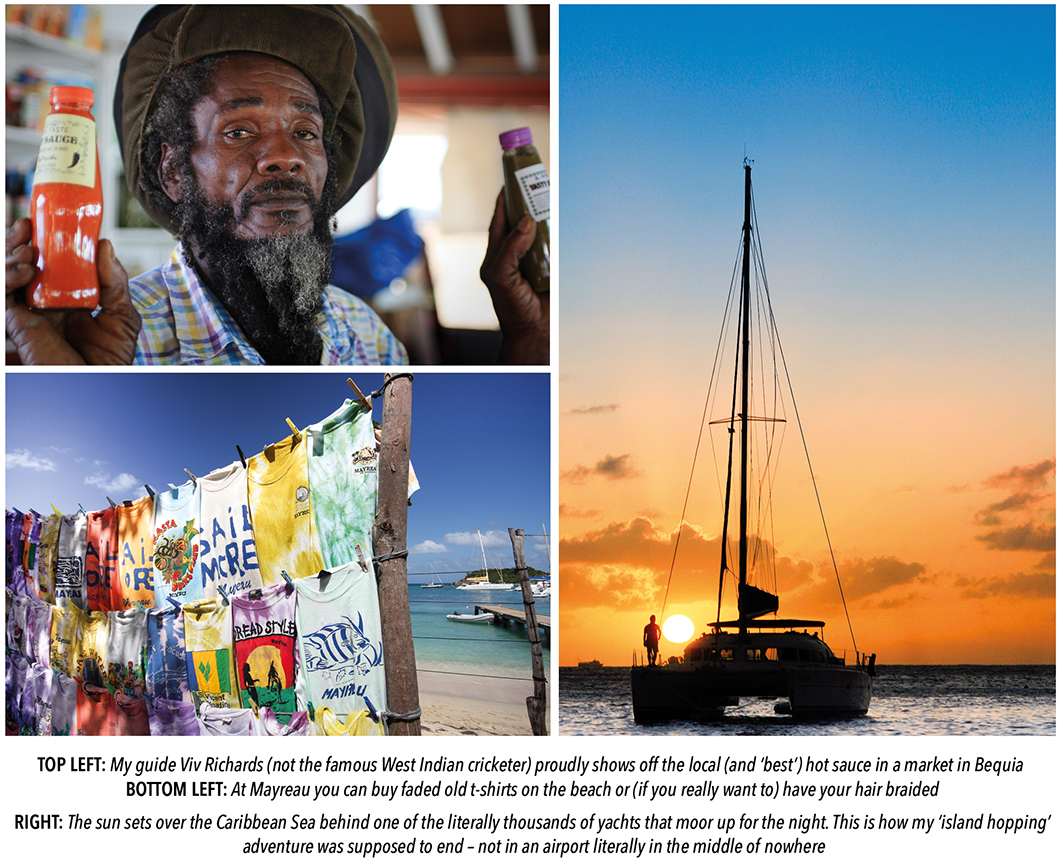 While all good things must come to an end, my island-hopping adventure came to a very abrupt one, with the yacht’s captain being called away to pick up “a famous old English guitarist”, leaving Viv Richards and me unceremoniously cast away at the nearest island that had anything resembling an airport: in this case Union Island. Feeling like pirates marooned in the middle of nowhere after a blood-thirsty mutiny, Viv Richards and I scraped together as many US dollars as we could and just about managed to buy a pair of tickets back to St Vincent. On the flight back north we could see the Caribbean Sea to the left, all turquoise and calm, with thick swathes of angry cloud over the Atlantic to the right. In the middle, unmistakable and dormant for the moment at least, was La Soufrière. From the air this great volcano was even more impressive than it had been from the ground. As I sat there wondering what was next, I at last got my view of water in all directions.