Herding cats? Surely not! Well, you’re right it isn’t the best way to catch cats, so at Swansea Cats Protection we undertake TNR – which stands for ‘trap, neuter and return’. Whilst it’s not the most glamorous role our incredibly dedicated volunteers undertake, it is certainly a vital and challenging one. TNR is the method preferred by Cats Protection to effectively and humanely control feral cat populations (we also use a variation of this method with stray cats, but we’ll look at that aspect of our work in a later edition of Bay). The term feral describes members of a domesticated species that have reverted to living as wild animals. Feral cats live alone – or in groups called colonies – and are found in towns, cities and rural areas. The best solution for feral cats is for them to be trapped, neutered and returned to their familiar environment.

A controlled, healthy and stable colony will deter other feral cats from moving in, will eventually reduce in size and will keep vermin levels down. Once a feral colony has been identified, often by concerned members of the public, our TNR volunteers trap the cats and kittens by setting up traps – similar to cages – to safely capture and take them to be neutered. Sometimes when we mention the word ‘trap’ to people, a look of horror flashes across their face – goodness knows what they imagine! So, we are quick to reassure that the trap is humane and is simply a clever cage baited at one end with strong smelling food and a slide down opening at the other. The cat enters the trap to get to the food and triggers the mechanism to close it…or at least that’s the theory! Sometimes cats and traps have different ideas of course, but patience is definitely a quality our TNR volunteers must possess if they’re going to catch a cat! Feral cats don’t want to be trapped and neutered and if you think your pet cat is occasionally ungrateful and immune to your charms, a trapped feral cat is something else again! Essentially these are wild animals.

Ann and her Lattes

Trapping can be carried out at any time night or day, any time of year, and so it is not work for the faint hearted. One of our ‘top-trappers’, Ann, arms herself with a latte and settles in for the hours she may have to wait until the cat is safely in the trap. But Ann says she can’t simply sit back, relax and wait – she is constantly problem solving about where, how and when to set the traps. Of course, if there are large numbers of cats to be caught, several traps are used which all need careful monitoring because a trapped cat will rapidly become very distressed. A cover is put over the trap which helps calm the cat until it can be transported. The trapped cats are taken swiftly to a veterinary surgery to be neutered, a straightforward procedure which will prevent the cat from breeding. At the same time, they will also have their ear ‘tipped’ – where between half and one cm of the tip of the left ear is removed under anaesthetic. This serves as a permanent visual mark from a distance to show the cat has been neutered, and to prevent the same cat being trapped for neutering in future. As I write this, Ann is on a ‘stake out’ trying to trap a mother cat and her kittens….but they’re not cooperating!

In addition to neutering, the cats are treated for fleas, worms and any injuries they may have before being returned back to their territory. Feral cats have never known a home other than that they’ve made themselves in an abandoned factory or outbuilding, they’ve not known much kindness or contact with people either. They are born to this life and so we overcome our instincts and look to what the cats need. We know of dedicated people who have supported feral colonies for decades, seeing them slowly reduce in size. 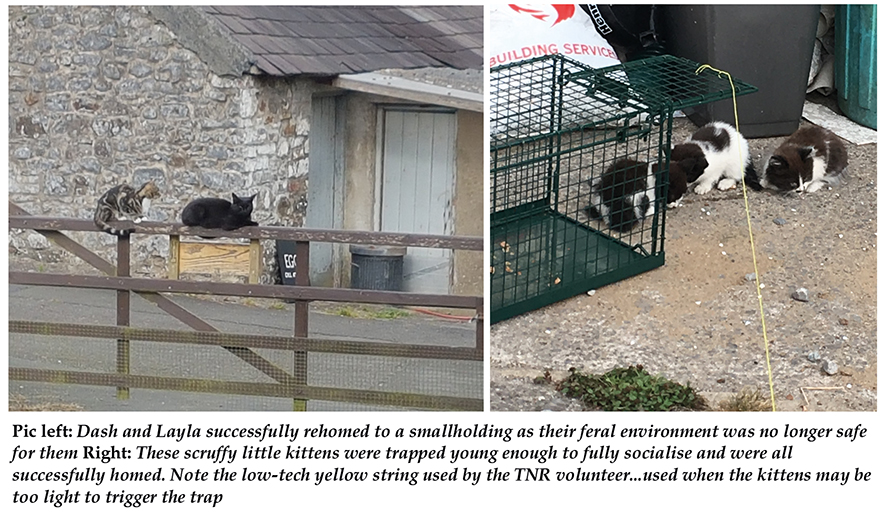 Kittens born to feral mothers can be socialised and found homes if they are trapped in time – this is vital. Our incredible fosterers have successfully cared for feral mothers and kittens, whilst others have bottle-fed and socialised feral kittens when their mothers were either not able to be trapped, were too unwell or tragically killed in road accidents. These kittens have then been successfully homed by Cats Protection – one of my own cats was a feral kitten. It is estimated that feral kittens can only be fully socialised if brought into our care before the age of approximately 8-10 weeks, after that they must either be returned to the colony (and neutered) or found homes where contact with humans is limited such as on small holdings, stables and even allotments.

But what of kittens born to feral colonies? Ideally, any breeding females are trapped and neutered first, to avoid growth in colony size while the process is taking place. But inevitably female cats become pregnant and our eagle-eyed supporters and TNR volunteers are vigilant to ensure these mums are trapped in time and their kittens cared for along with them. One such kitten is Junior who, along with her siblings, was trapped by our TNR volunteers and fostered until robust enough to fend for herself back in her colony. A few months ago, the person who supports the colony notified us that poor Junior had been hit by a car, so our volunteers had to respond immediately and take her to the vet. She was found to have a fractured pelvis and would need weeks of cage rest to allow her injuries to heal. Without hesitation Fran, our indefatigable Treasurer, TNR volunteer and fosterer, took in this frightened young puss for cage rest in her house. Now although Junior was injured, in pain and without doubt in need of experienced nursing care, she was also a feral cat – very wary of humans and used to living and roaming free outside. Yet here she was in a large comfy cage in a warm house, with regular meals – was she grateful? No, cats don’t do grateful at the best of times. Was she grumpy and keen to get back to her colony? Yes, but she also understood in some way the need to comply with her situation. After weeks of cage rest, Fran released her back to her colony where she quickly found her mum and siblings again.

Sometimes, trapping an entire colony of cats can take weeks, months or even years, and supporting the colonies in Swansea is an ongoing commitment for us. TNR work is definitely more of an art than a science and a role which requires intelligence, diligence, problem solving skills and compassion by the bucket-load. Our TNR volunteers carry out this work without any financial remuneration and in their own time – so if you ever see a woman sitting in a Cats Protection van with her eyes firmly fixed on a metal trap, sipping a latte, offer her a biscuit to go with it!

We can’t thank Lesley and her Bay magazine team enough for giving us this space each month to share our work and showcase just a few of the cats desperately waiting for new homes. Last month we told you about our current longest staying cat, Tootsie, and we are overjoyed to tell you that after seeing her in Bay, she was finally adopted….early days yet, but she’s getting used to life outside a cattery pen. In addition, SCP adopters Maria and Mark, saw the piece last month about our fundraising charity shops and were quick to donate some lovely things after a de-clutter (along with many others, we’ve had a terrific response – thank you!). Not only that, but Maria and Mark adopted their now much-loved cat, Cleo, after she featured in Bay back in 2014. 100 times thanks to Bay! 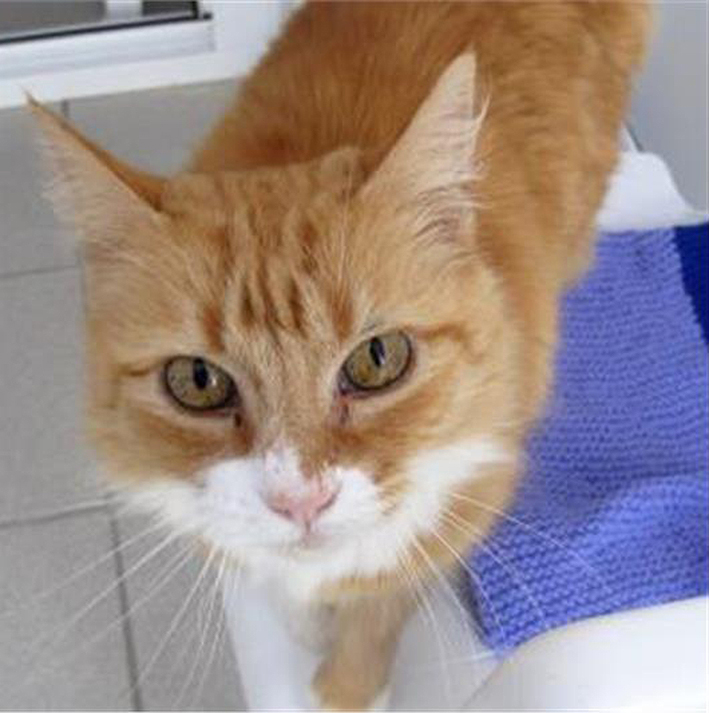 Honey is waiting for her forever home

Sweetheart Honey was found as a stray and needed our love and care to restore her confidence, which luckily didn’t take long! Although she is a mature cat, Honey is spritely and playful. She enjoys cuddles and fuss and would make a wonderful companion….please, call our Helpline to arrange to come and meet her and the many other wonderful cats in our care.

If you are interested in adopting or fostering one of our lovely cats or kittens, please get in touch and arrange to come and meet the cats waiting patiently for a loving home. We can be contacted via our Helpline 0345 260 2101 or email us at swanseacats@hotmail.co.uk Please note our Helpline is answered by a messaging service and we will respond as soon as we can, but please be patient and remember that we are all UNPAID VOLUNTEERS trying to do our best for the rescue cats and kittens of Swansea.