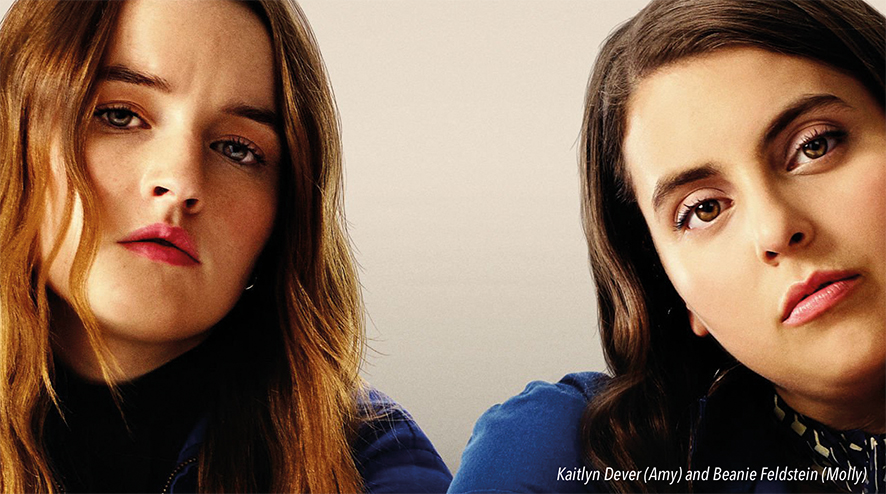 Emlyn Roberts Harry reckons that his film pick for June will have us rolling in the aisles, but will also move us to tears in the end. That’s quite a challenge, but Emlyn’s previous recommendations have been spot on, so I will just have to go along and see it for myself.

High school comedies are plentiful, but ones where the main characters are young women are somewhat rarer. It’s rarer still for them to be written and directed by women to boot, but such is the case with Booksmart, which is doubtless a big part of the reason why it feels so fresh, genuinely hilarious and consistently emotionally true. Not only is it the funniest film of the year so far – and by some distance at that – it’s one of the best of the year, full stop.

It’s the story of Molly and Amy, who are about to leave for college having spent all their time at high school knuckling down and working hard to ensure they get into good colleges. But when they discover that plenty of their classmates, who did have fun at school, have also gotten into said colleges, they panic about having wasted their time in school and are determined to cram all the fun they’ve missed into the last night before their graduation.

Or more specifically, Molly is. The brash, confident extrovert to Amy’s calmer, more level-headed introvert, she essentially drags her best friend along on her mission against Amy’s better judgment. It’s their friendship that sits at the heart of the film, without which nothing else would work, and right from the off actresses Kaitlyn Dever and Beanie Feldstein are utterly convincing as two best friends who’ve known each other since they were kids. We’re introduced to them having a spontaneous dance-off before the drive to school, and it’s this profoundly uncool but never less than completely earnest energy that powers their relationship. You never doubt that these are real people with a real friendship, and all of the jokes and drama that ensue unfold organically from this friendship.

Dever and Feldstein are superb, but much credit must also go to first-time director Olivia Wilde for keeping things so naturalistic and believable, no matter how absurd the situation; and the writing team of Emily Halpern, Sarah Haskins, Susanna Fogel, and Katie Silberman for such convincing dialogue that, while unfailingly very, very funny, never crosses over into being clever-clever or implausibly witty, and crucially, rings true to how teenagers talk. It’s a really sharp script, with the over-whelming majority of the gags landing and scenes never outstaying their welcome or feeling over-improvised.

The actors were allowed to improvise, and good improvisation can be a boon (for example, the afore-mentioned dancing scene), but improvisation for its own sake can often result in baggy, shapeless comedy – which is mercifully never an issue here. There’s not a scrap of fat on the film and not a wasted line of dialogue; there’s real discipline here, which is wonderful to see at all and particularly impressive given that this is Wilde’s feature debut.

All this would be moot if it weren’t funny, and so to the meat of the matter: Booksmart is absolutely hilarious, comfortably the funniest film released so far this year.

A comedy can get away with all manner of problems if it brings the laughs; here, the problems aren’t present, and you’ll spend the whole film belly-laughing anyway. Hardly a scene goes by without at least one genuinely laugh-out-loud gag; Jason Sudeikis gets a couple of killer lines as the head-master, and by the time Billie Lourd shows up to steal every scene she’s in, you’ll be crying with laughter.

But the real trick is that, by the end, you’ll just be crying. Booksmart does such a terrific job of making you love Molly and Amy as much as they love each other that, by the time things come to a close, it’s really quite heart-breaking to have to leave their company. This is a very special film, a properly authentic, big-hearted slice of teenage life that has gags and emotional heft to burn. Don’t miss it.