This month, Ian, recovering after an epic charity cycle ride, takes us on a walk around Crickhowell that not only takes in the amazing views from the top of Table Mountain, but also returns to the valley floor for a stroll along the banks of the River Usk

I haven’t done much in the way of walking recently, as I’ve been concentrating on training for what for me, was a pretty demanding charity cycle ride. The caveat in that sentence is ‘for me’ because in my world, a cycle ride of 55 miles including a climb over the Black Mountain from the Llangadog side is a major physical challenge. However, it is a mere stroll in the park for regular cyclists as was borne out during one of my training rides. The Gower Sportive is an annual 70 odd mile ride around Gower, which I’m sure is cruelly planned to include every single incline the peninsula has to offer. I certainly saw the area in a brand-new light, and one that wasn’t particularly positive I can tell you. I found it brutal. The regulars, all of a similar age to me it seemed, simply breezed around as if they were cycling along the prom. They hardly seemed to be breaking sweat, unlike me who puffed, panted, screamed and cussed all the way round, constantly being overtaken by people happily chatting and laughing whilst I was blowing out of my arse, hardly capable of drawing breath let alone being able to speak. Man, it was tough. Those cyclists are fit!! I doff my cycling helmet to you all.

, against all odds, the charity ride was a breeze in comparison and successfully completed. It was arranged to raise money for Ty Olwen after a good friend of mine, Martin Hudson tragically died of cancer some 18 months ago at the ridiculously young age of 47, leaving behind a young family. If anyone is interested in donating to this worthwhile cause, then I’ll give details at the end of this article. So, boy was I glad to put on my walking boots. To be honest I was also relieved to ditch the unflattering Lycra clothing if nothing else. Not that I’m vain or anything, but it did tend to show up all the contours of my ageing body which I usually go to great lengths to conceal. When in public anyway. But more importantly of course, it was a mighty relief that my nadgers could assume their natural god given anatomical position after being wedged somewhere in between my spleen and liver after hours in the saddle. Phew! So where better place to go, than a walk centred around the town that has just been voted the best place to live in Wales, Crickhowell. And it’s easy to see why. It’s beautiful with a jumble of attractive build-ings, a castle, and an interesting mix of independent shops and pubs, the most famous being of course The Bear a 15th Century coaching inn. As far as the walk goes I’ve given you a couple of options. The main walk is a figure of eight route climbing to Table Mountain or Crug Hywel, which overlooks the town, returning to the valley floor to stroll along the banks of the River Usk, through the Glanusk Estate and then along the towpath of the Monmouth and Brecon canal. So, you can do it in one go or either loop on its own. 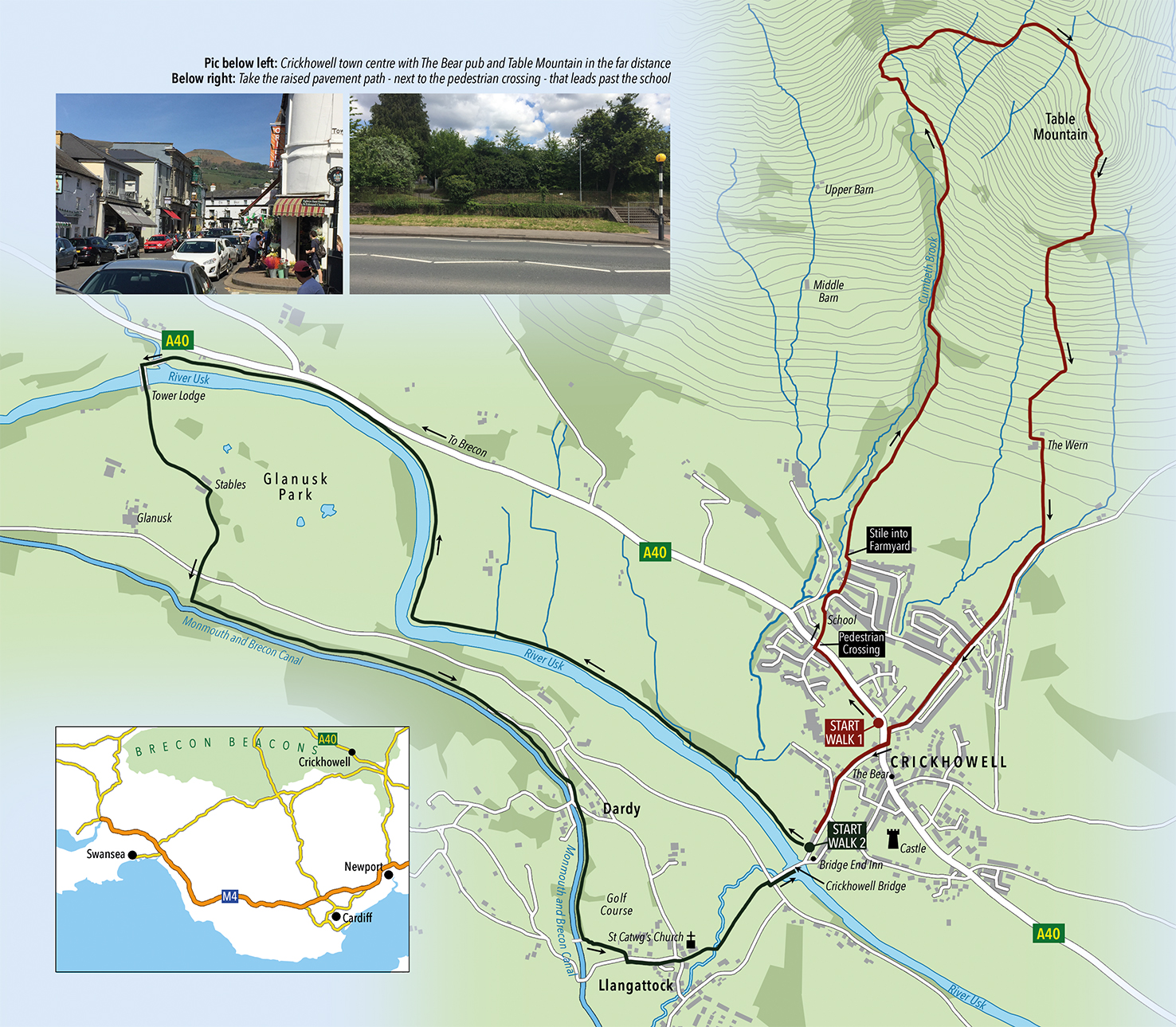 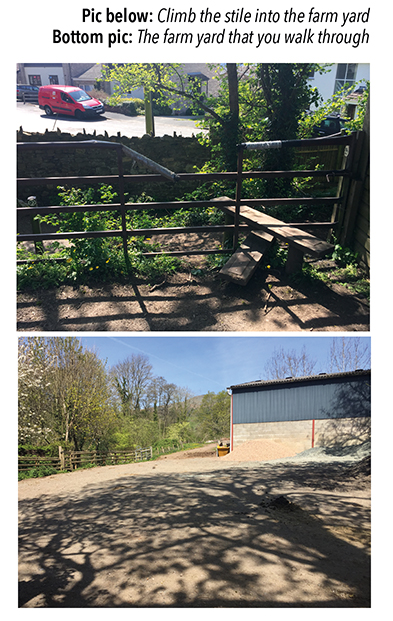 The climb to Crug Hywel (Walk 1 on the map left) is quite tough, but if you’ve done Pen y Fan, you should be fine. Starting off in the town centre, walk along the road towards Brecon for a few hundred yards when you’ll see a raised pavement outside the school on your right and by a pedestrian crossing. Take this path which leaves the main road at right angles passing the school as you do so, and, emerge into a residential cul-de-sac. Look out for the path which continues alongside house No 56 which accesses another street where the path passes no 38. Follow this and you’ll come to a country lane where you’ll see a gate and path ahead and slightly to your left so climb the stile into a farm yard. Your route from here is quite obvious – basically straight up along the well-worn path ahead, initially through open fields and then through the attractive wooded glade and valley. 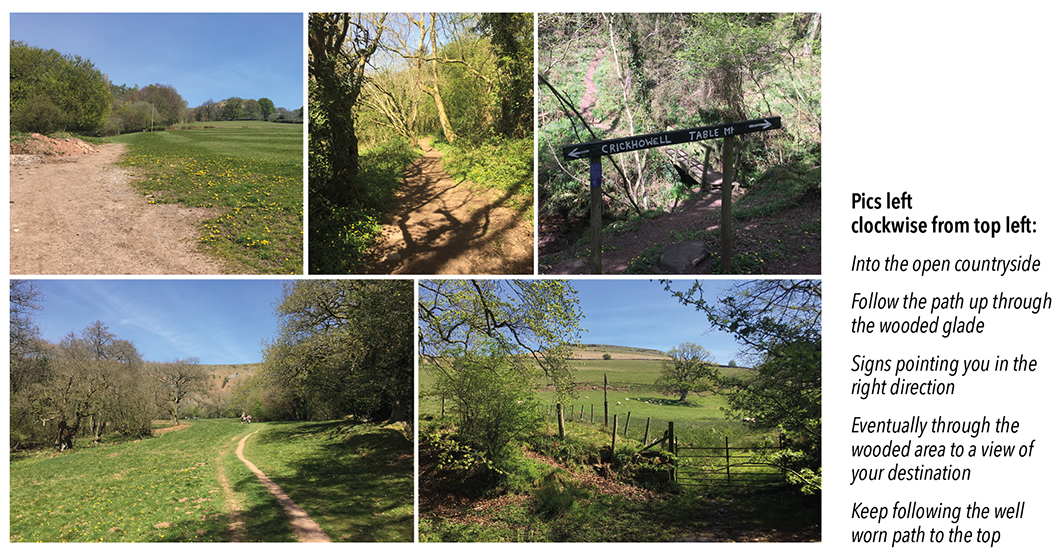 Eventually you come out into open countryside where your destination can be seen to your right. Once again, the route is obvious. After you reach what appears to be a series of sheep pens, the path swings right alongside a dry-stone wall leading you in a semi-circular direction to the summit. And whilst it’s quite a tough climb, your reward for all your efforts is the quite 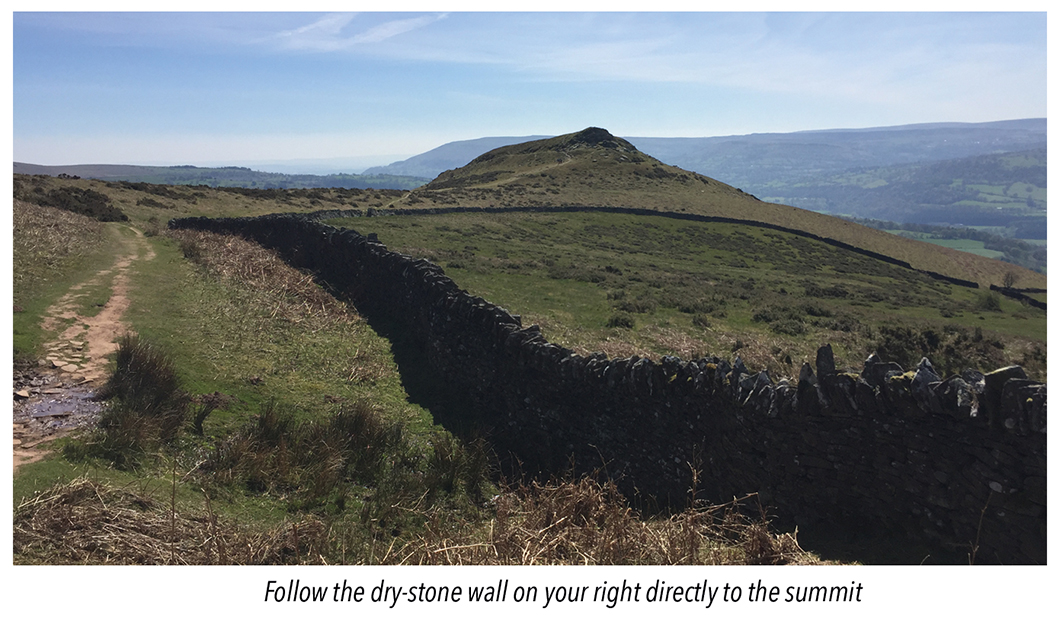 stunning view of the Usk Valley below and beyond. From here you can see Pen y Fan and Corn Du to the west, panning around to the the Glanusk estate below and to your right, Crickhowell immediately below and the Llangattock escarpment ahead. Then around to your left towards Abergavenny the imposing peak of the famous Sugar Loaf, which from this angle looks like a pimple ready to pop. Bleugh!! 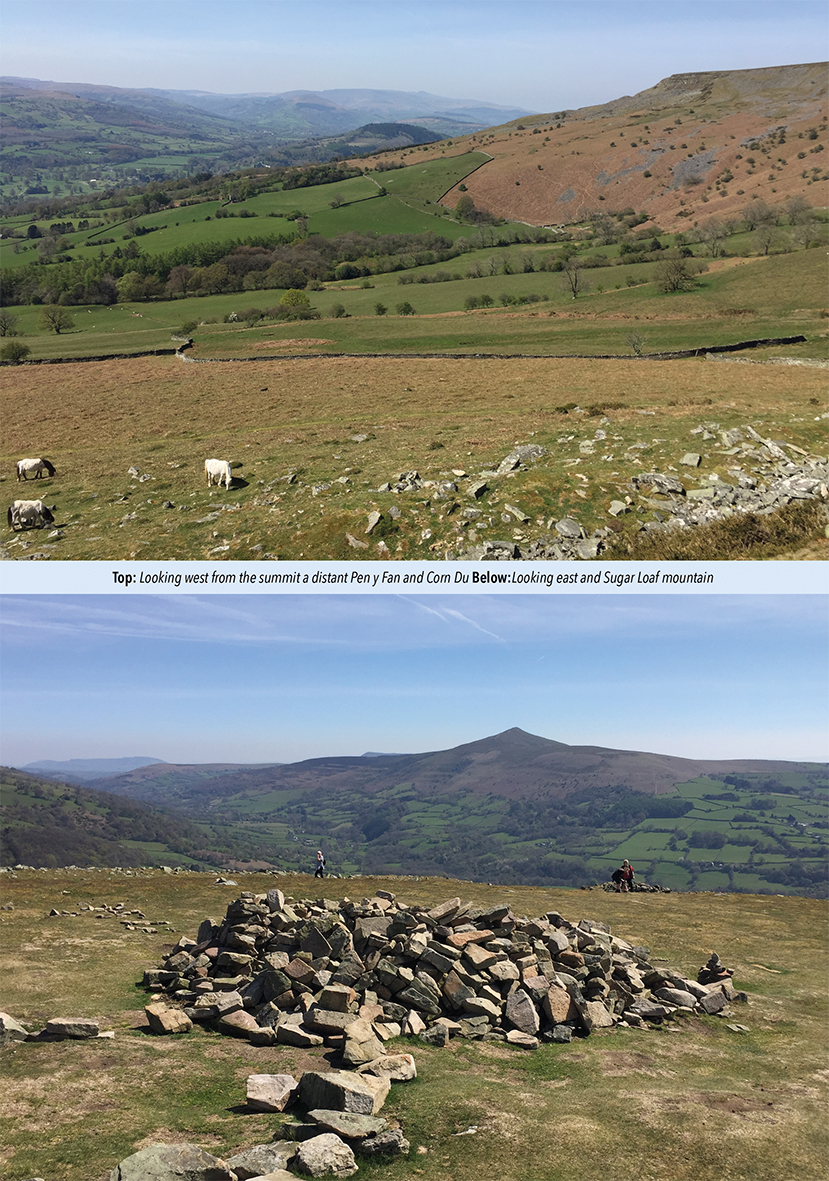 Crug Hywel, from which the town gets its name, is an Iron Age Celtic hill fort and remnants of the ramparts are still visible. Geologically speaking, it comprises of Old Red Sandstone which is a rock relatively resistant to erosion which is why it sticks out. It’s not the highest point of the surrounding mountain range, which is the southern part of the Black Mountains, but high enough to be physically demanding and to provide glorious views. 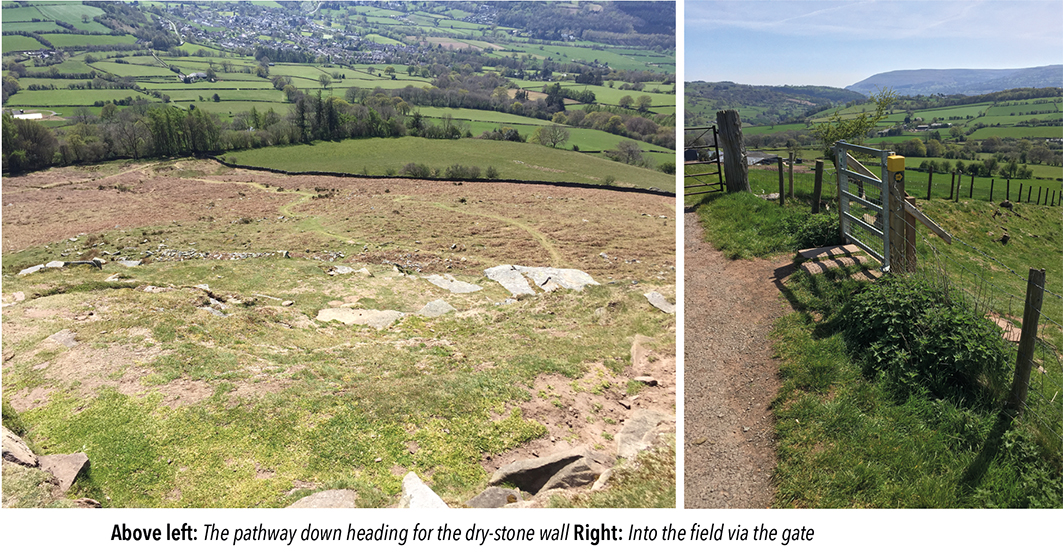 Now the descent. Walk to the end of the plateau and looking down in the direction of the town, carefully head for the dry-stone wall below. Over the stile in the corner and then follow the way marked path. Over another stile into a field through another gate then right continuing to follow the way mark descending into a field via a gate. You’ve got a choice at the next gate – I went right, leading into a field and towards a farm. Through the farmyard over the next stile and onto the access road to the farm. At the bottom of the road turn right along the main road and then right at the next fork which takes you back into town. 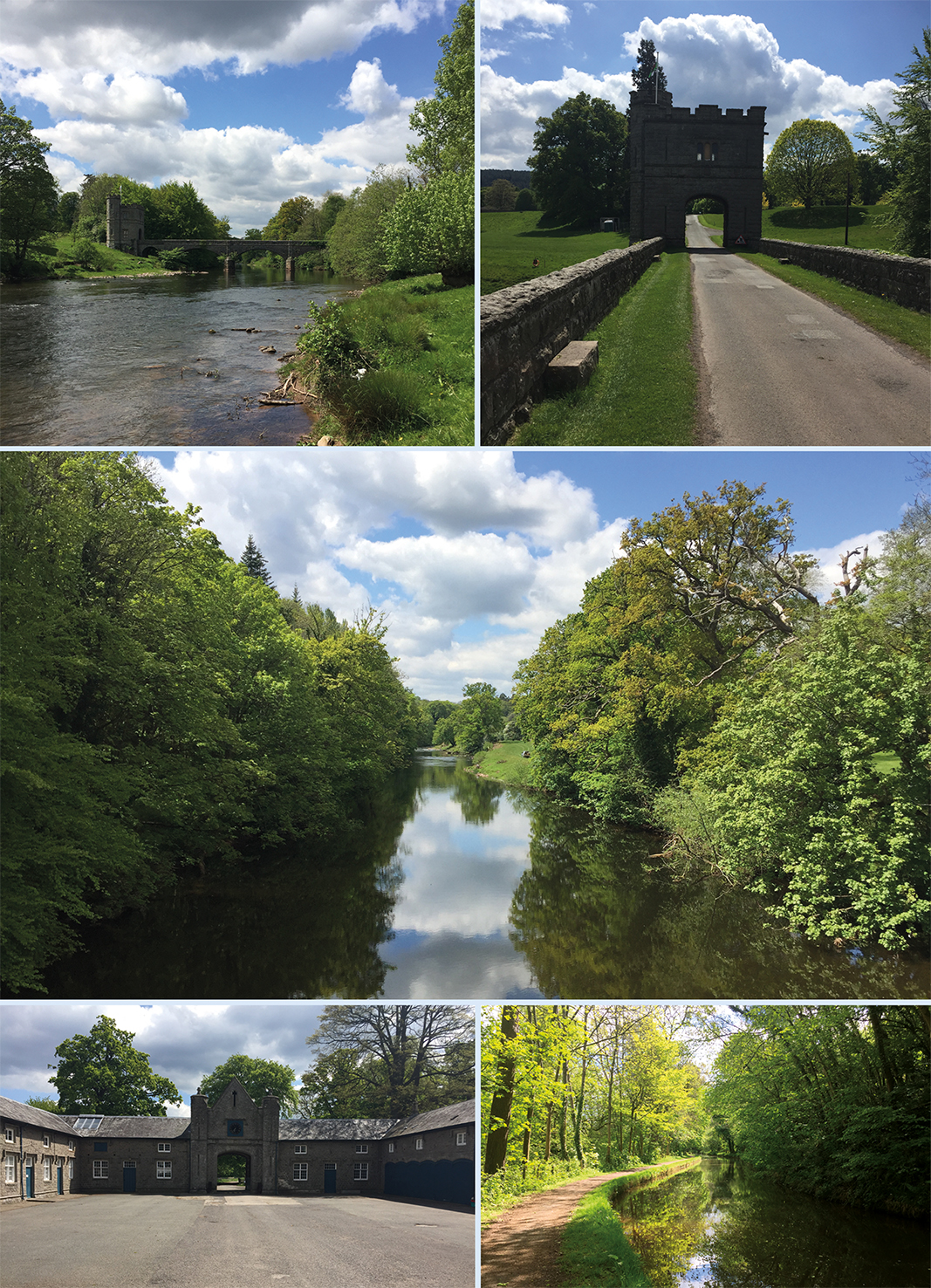 Top row: The access bridge to the Glanusk estate / Crossing the bridge and through the Tower Lodge arch. Middle: The River Usk looking west from the bridge. Bottom row: Glanusk stables / The towpath alongside the canal

So, if you’re doing the whole figure 8 thing (Walk 2 on the map), now turn left at the main road then right opposite the filling station down the street towards the river. A hundred yards or so before the bridge, there’s a path to your right leading into a riverside park and simply follow this with the Usk on your left until you come to the access bridge to the Glanusk estate about 2 miles ahead.

Go over the bridge and through the rather grand entrance to the estate, Tower Lodge. The estate itself consists of 400 acres of private parkland, 800 acres of forestry, 3,500 acres of lowland and hill farms, 16,000 acres of common land hills and 5 miles of the River Usk. By way of contrast, I’ve got a small lawned area, a generous patio and a rotary clothes line. Home to the Legge-Bourke family since 1826 they’re probably best known for their daughter Tiggy, who came to national prominence as the nanny to Prince William and Harry. (Tiggy – there’s posh! We didn’t have many Tiggys in Morriston Comp I can tell you).

There’s a public right of way through the estate but plan ahead as occasionally there are some closures as it hosts several events throughout the year, notably the Green Man festival in August. Keeping to the road which bears left where it leads you to the stable block then through the arch under the clock and immediately right towards the exit of the estate and the main road. Carefully cross the road up the steep lane opposite and onto the towpath of Monmouth and Brecon canal. Turn left along the towpath and glory in the serenity andbeauty of this part of the walk which must be in stark contrast to the times in the 18th century when it was a major industrial route, transporting raw materials such as coal, limestone and iron to the port of Newport.

Exit the towpath after just over a mile, at the wooden footbridge, through the gate to the left, descend a grassy path and into the village of Llangattock and head for the church. Through the arch around the side of the church and back to Crickhowell for a mooch around the shops on the High Street. Granted, there’s no Joe’s ice cream here, no pier and no beach. Neither is it the gateway to one of the most beautiful places in the UK. No Verdi’s, Castellamare, Cafe Valance, or La Prensa. It hasn’t even got crazy golf course! But it’s the best place to live in Wales. Really?