Liz Barry continues her travels through India where she goes in search of tigers.

Ranthambore National Park, a jewel in the state of Rajasthan is the go-to place for wildlife enthusiasts and photographers visiting India. It’s close enough to make a detour from the cities of Agra, Delhi and Jaipur, and it offers an opportunity to immerse yourself in the natural environment of the country.

Together with five others, a guide and driver we bounced along dusty tracks towards the park entrance, the collective mood buoyant, exhilarated by the ride and the gathering thrill of anticipation, the same question running through our minds, would we be lucky enough to see a tiger?

Set within the Aravalli and Vindhya Range of mountains, and once the hunting ground for the Maharajahs of Jaipur, the landscape of craggy hills, waterfalls, forest and meadows means there is plenty of open space increasing the chance of a tiger sighting. As most of the big cats here were born within its 400sq. kilometres, they are unworried by vehicles and their occupants, so sightings are not uncommon. 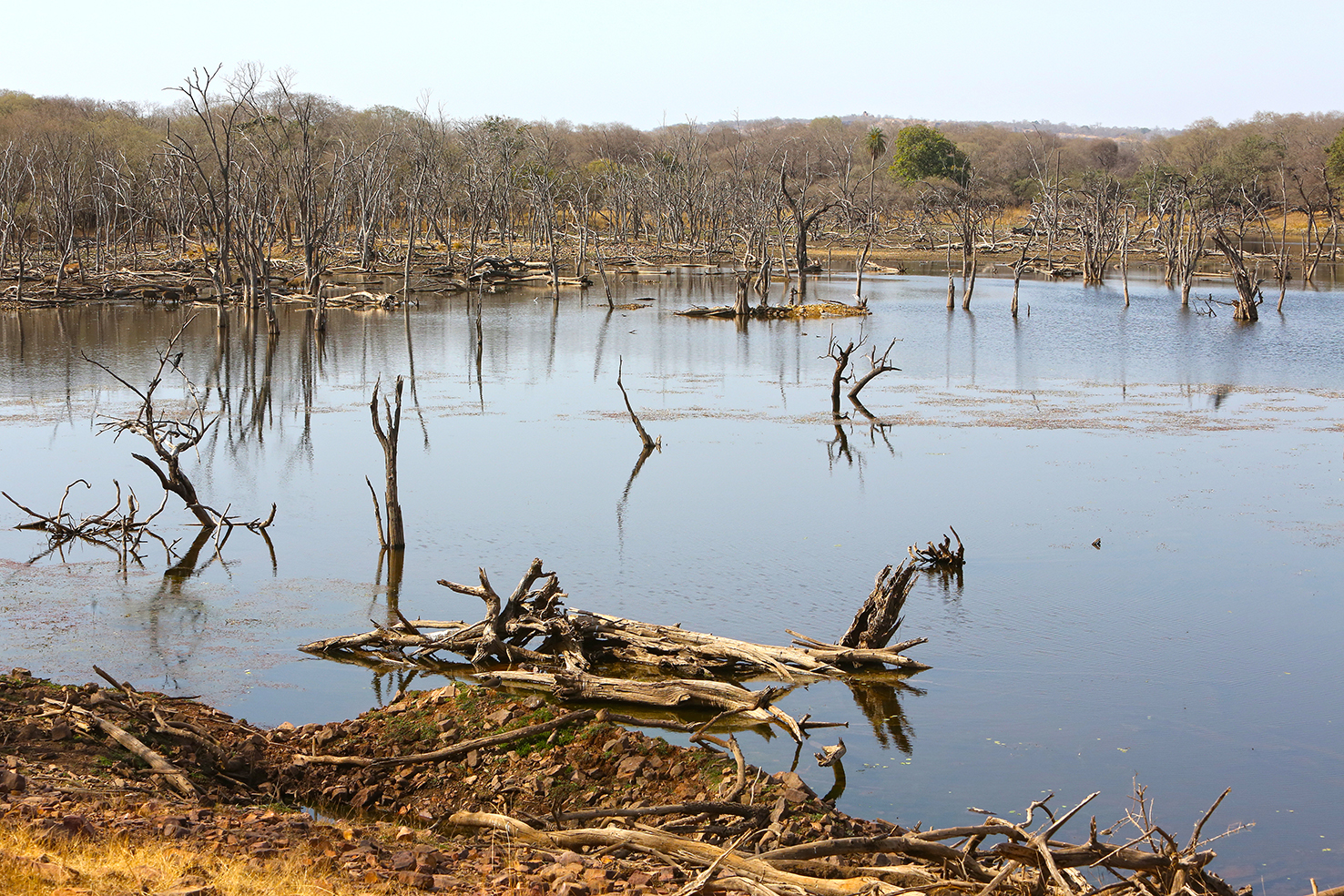 The many water-holes create a haven for birdlife both migrant and resident, the habitat is also home to sloth bear, leopard, wild boar and several species of monkey and deer. The latter were frequently seen as we drove through forest and out into open terrain. Of course, I wanted to stop and take photos but unfortunately that was not going to happen just yet, our guide was on a mission, taking us deeper into the park in the hope of spotting a tiger, stirred from slumber on the hunt for breakfast. 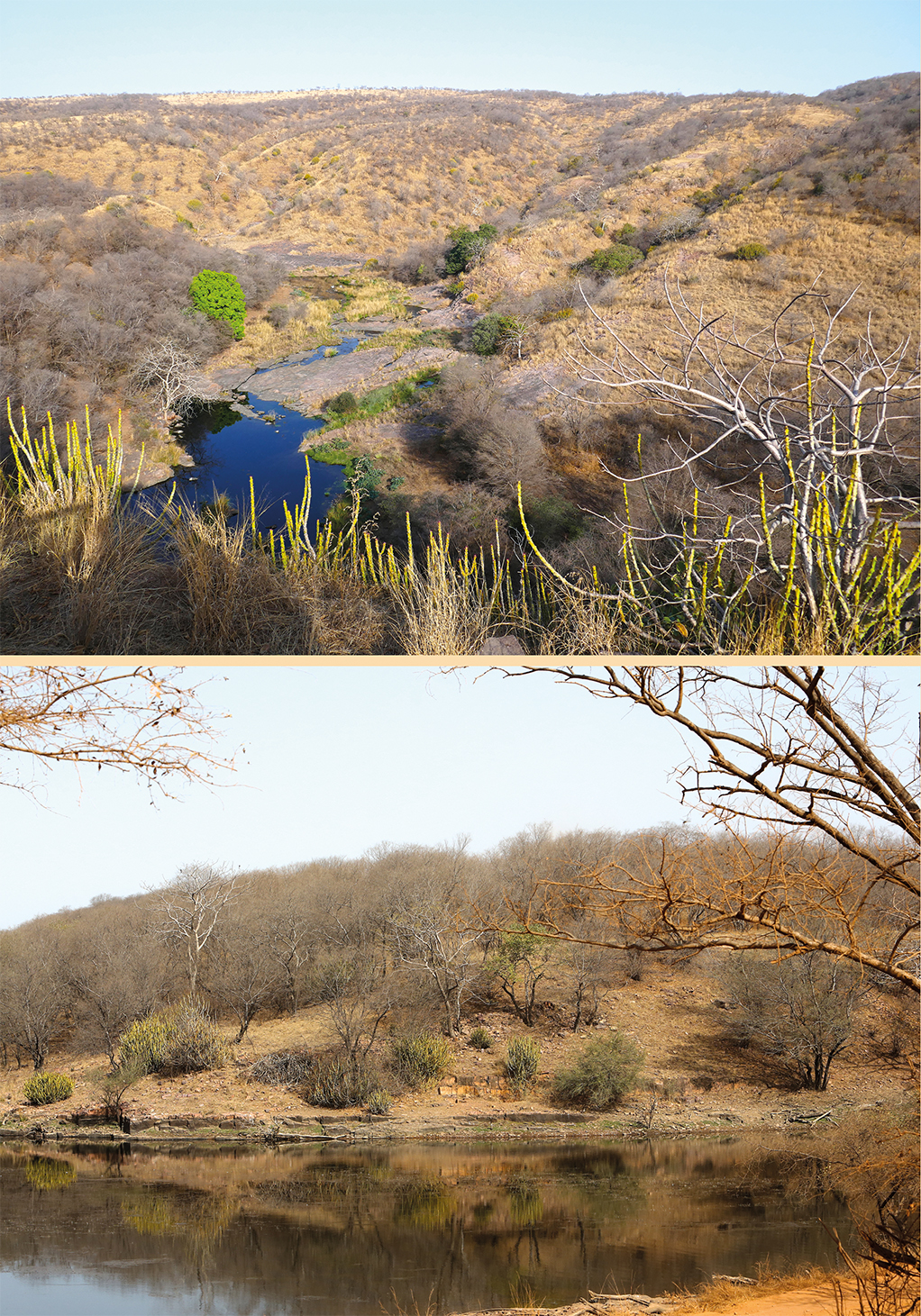 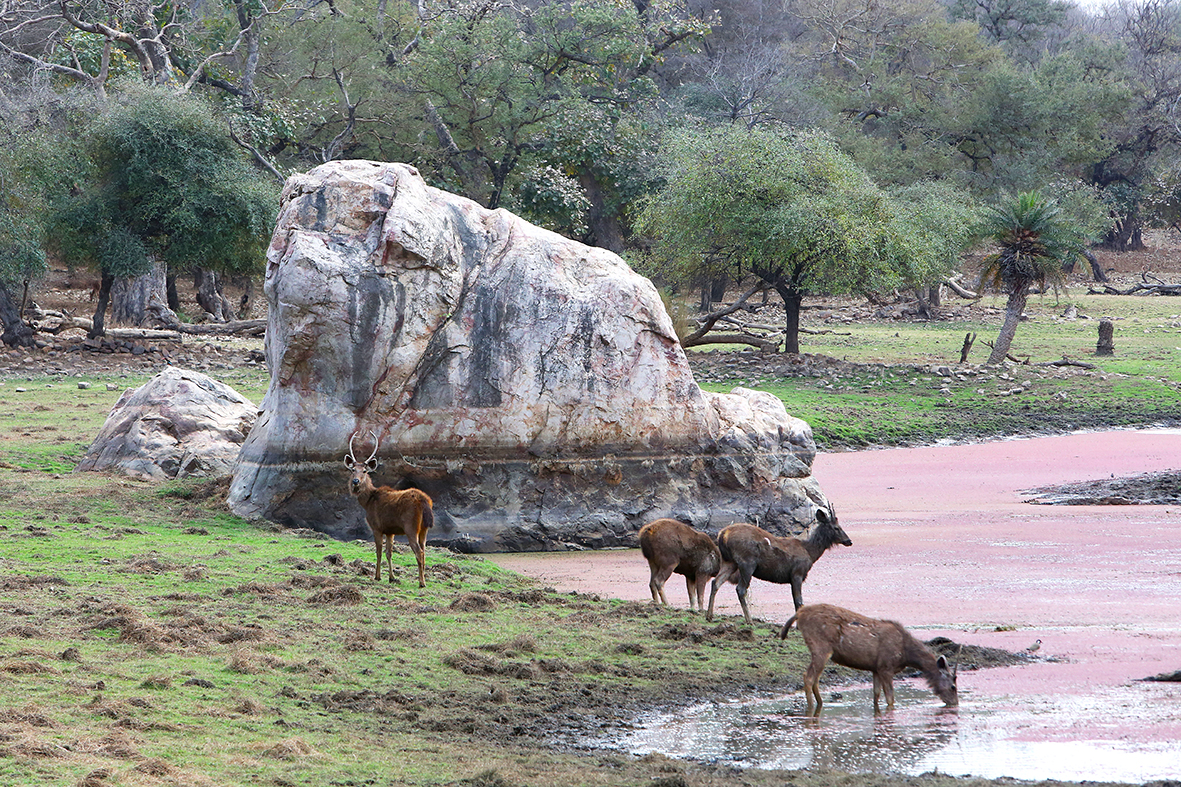 Continually on the lookout for signs our guide pointed out large paw prints in the dust, we drove on criss-crossing the countryside, our eyes constantly scanning for the slightest stirring in the undergrowth. After a couple of hours our patience was rewarded when a guide with incredible eye sight spotted a flash of white – the markings on the tip of a tiger’s ear twitching about 120 metres away – well camouflaged amongst the scrub. Our driver skilfully manoeuvred our jeep atmosphere was electric; binoculars were passed around, cameras and phones held in nervous hands, poised in readiness, willing the tiger to show itself. 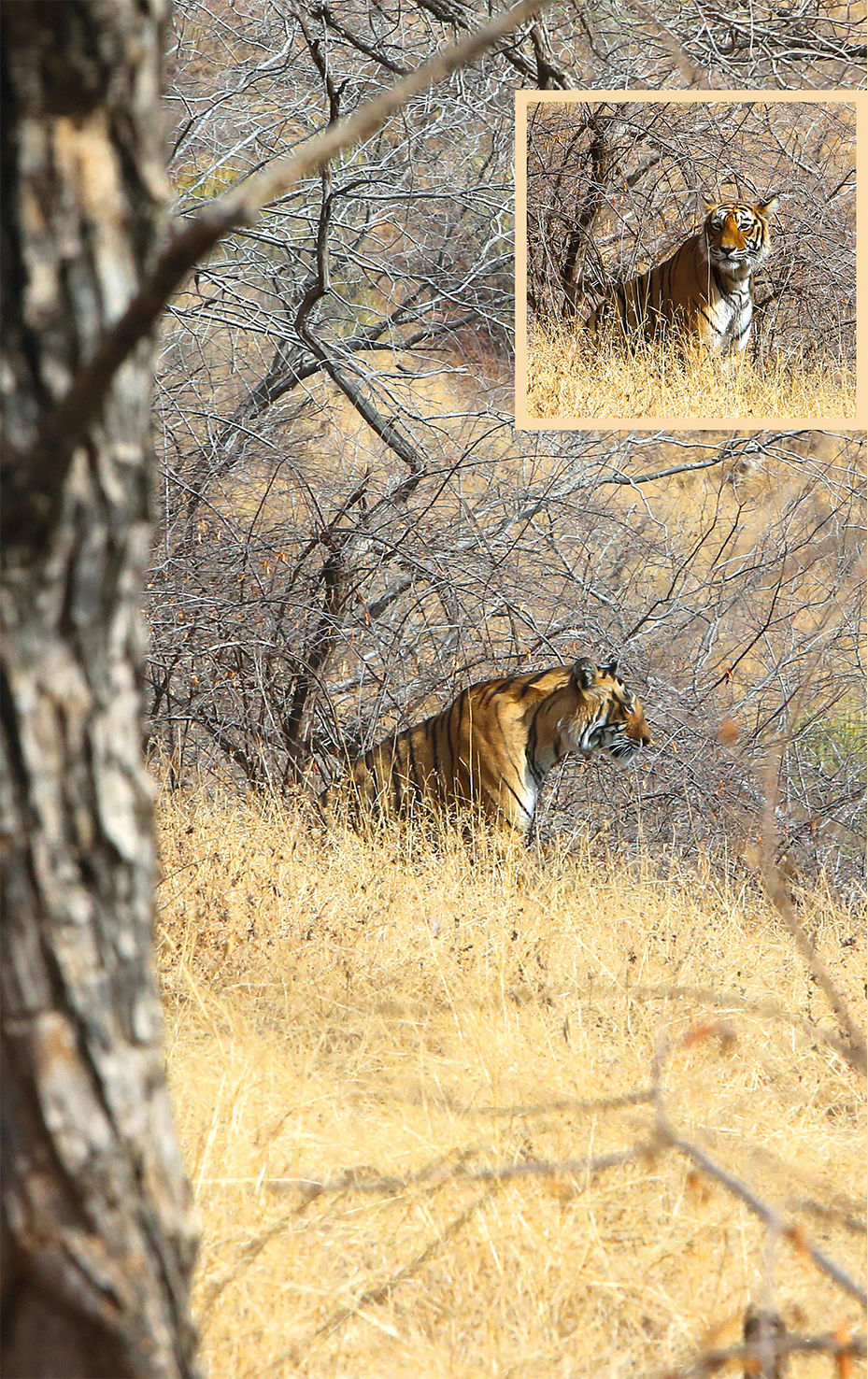 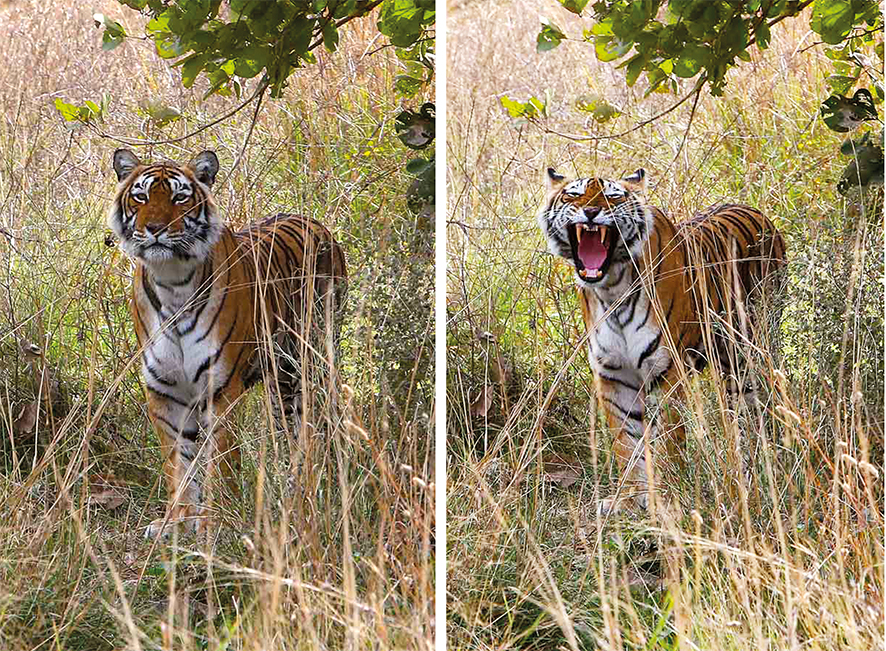 After some time, there was movement as if on cue he sat up and turned his head in our direction. I held my breath not quite believing I was in the presence of this magnificent wild animal; then I tried to capture as many frames as I could of this incredible moment. Unfazed by the gasps of delight and the barrage of clicking cameras, the 22-month old male cub – see the photographs on the left – (one of three cubs born to tiger 19 Krishna) looked around then obviously bored with his audience laid back down, the exquisite markings of his coat vanishing into the undergrowth.

Not imagining this experience could be surpassed, the following afternoon we set out once more on safari this time into zone 5; the previous morning we had been in zone 4. The terrain differed to our previous drive in that it was more open and was interspersed with watering holes. Storks and other birdlife waded in the shallows. 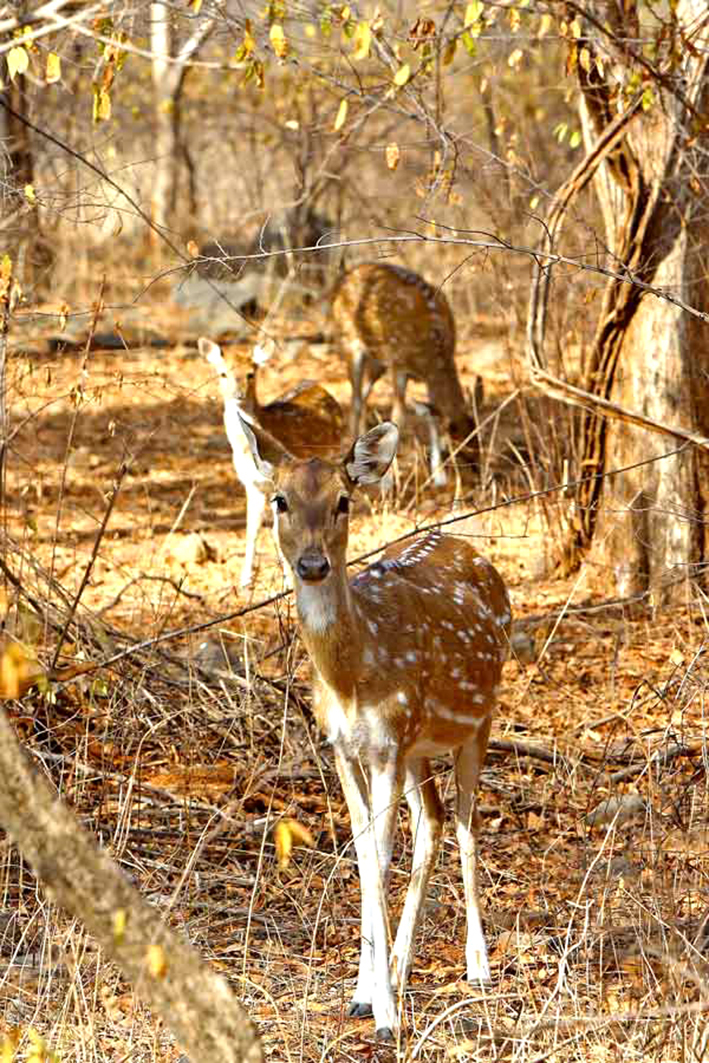 Throughout the forest, Samba and Spotted deer grazed and like a guard of honour along the roadside grey Langur monkeys sat.

Tigers are solitary by nature, and a guide’s knowledge is invaluable as they are familiar with the territory each one roams. That’s how we came upon our second tiger, well-hidden amidst overgrown bush shaded from the hot afternoon. An encounter so amazing it gripped me with fear, as I was very aware that we were a little too close for comfort and could easily become an afternoon snack.

Our driver pulled the jeep back, so we could observe the hideout from a safer distance, finally, through the long rustling long grasses emerged a majestic large cat, an 8-year old tigress named Laila – see photographs above. The intensity of her gaze commanded our attention, so at ease was she within her surroundings, instantly I was captivated, she stole my heart. Even when seconds later her striking beauty was transformed as she opened her mouth wide displaying a fine set of teeth. Whether it was a yawn after her nap or to warn us of her presence the sight certainly sent a shiver down my spine, reminding me this was an untamed cat. 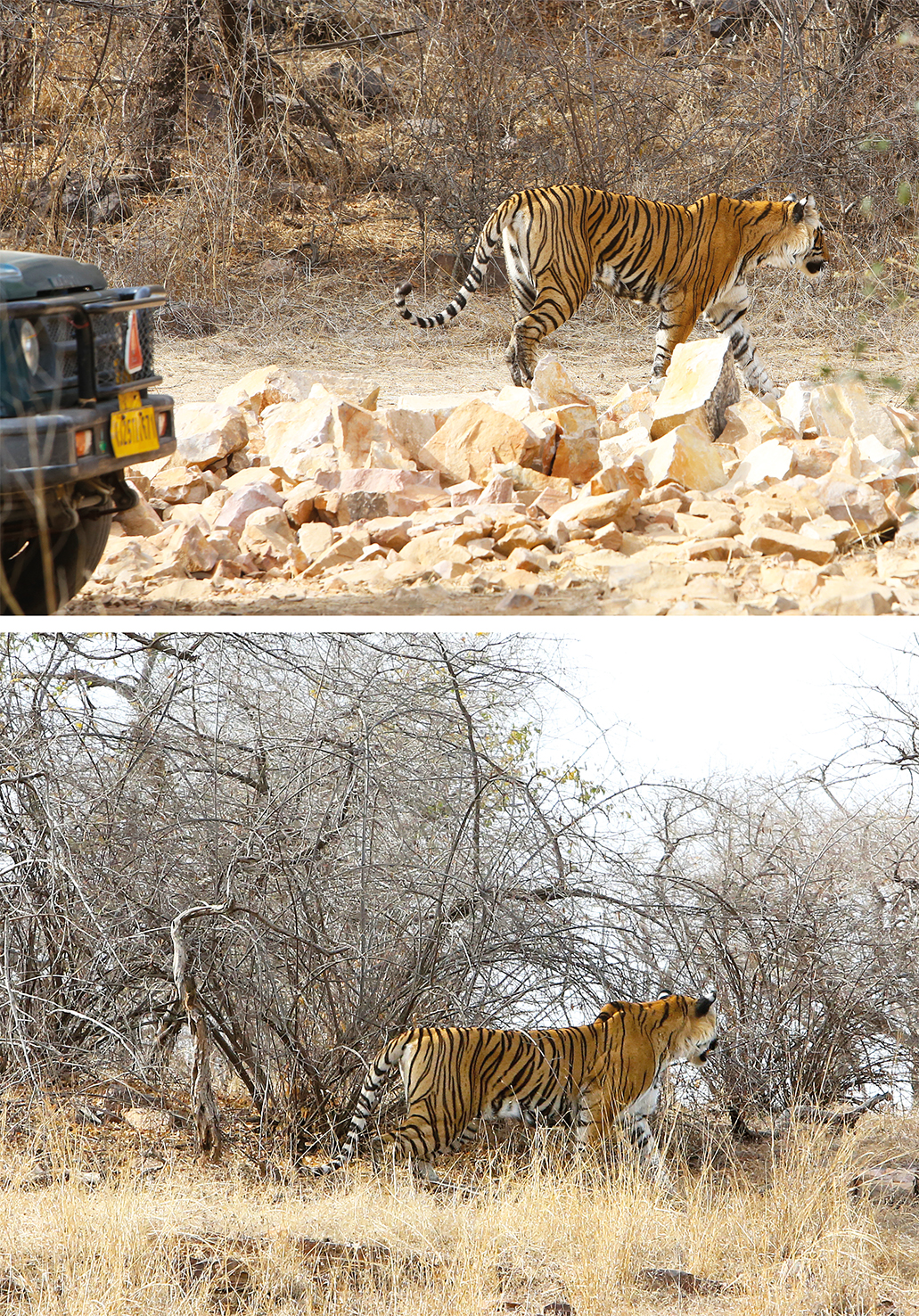 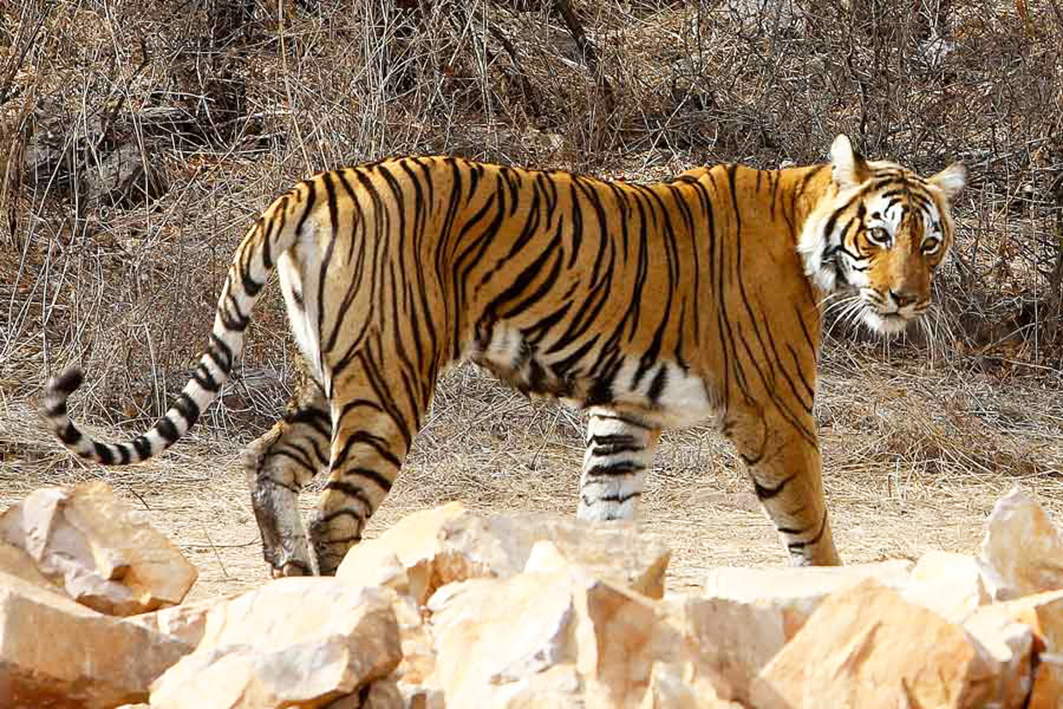 Laila stared at us for a few moments longer as if assessing the scene, then sprinted between the jeeps and leapt onto a rocky outcrop, the sheen of her golden orange coat illuminated by rays of bright sunlight. Other jeeps arrived and slowly we followed her progress inching along the tracks. Our eyes straining upwards, we spotted Samba deer on the horizon, keeping her distance the tigress crouched down then casually draped her striped paws over some large stones. Eagerly we watched as the long silent minutes ticked away, 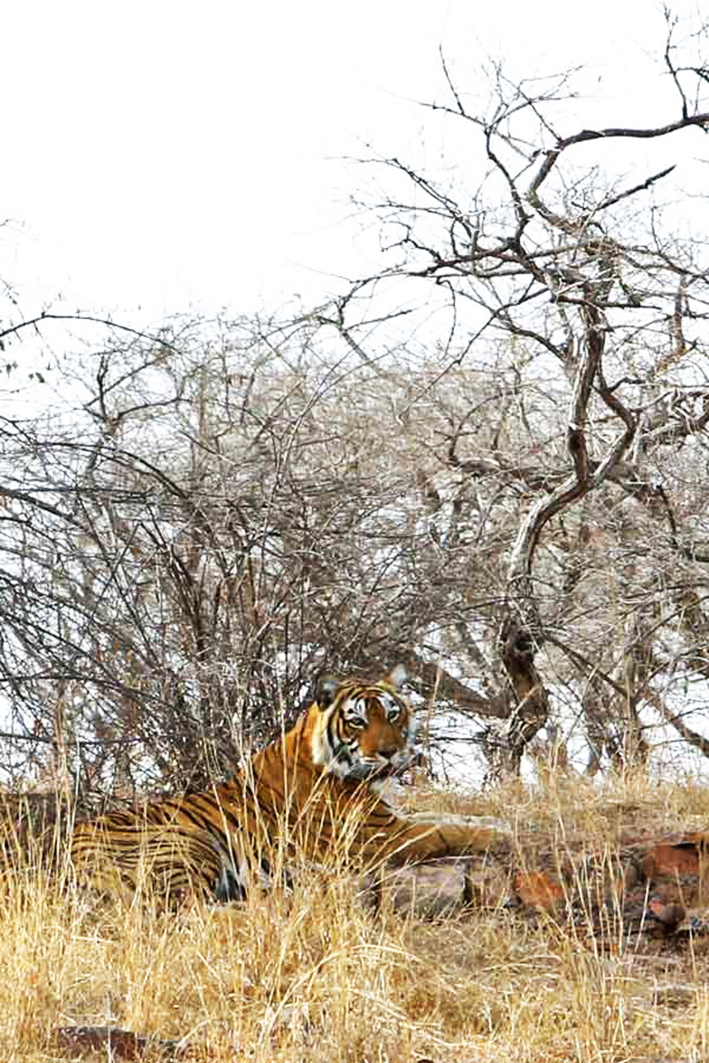 would she move in for the kill or not. Well she had obviously eaten as eventually the queen of the jungle sauntered off into the vegetation, disappearing from view but not from our memories.

Seeing a Bengal tiger in the wild was an incredible experience, one which will be hard to beat for the extreme thrill and excitement. Declared a wildlife sanctuary in 1957, Ranthambore is named after the fort which towers above the jungle; it then gained the protection of “Project Tiger” in 1974 and in 1981 was awarded the status as a National Park. With over 70 Tigers today wandering within its boundaries it is certainly one of the finest places to view animals in India, as it offers a combination of history, nature and wildlife.

Ranthambore National Park will be just one of the highlights of my Photography Tour to Northern India in October. For further information please contact NEI UK on 01269 823355 or email enquiries@neiuk.co.uk  www.neiuk.co.uk