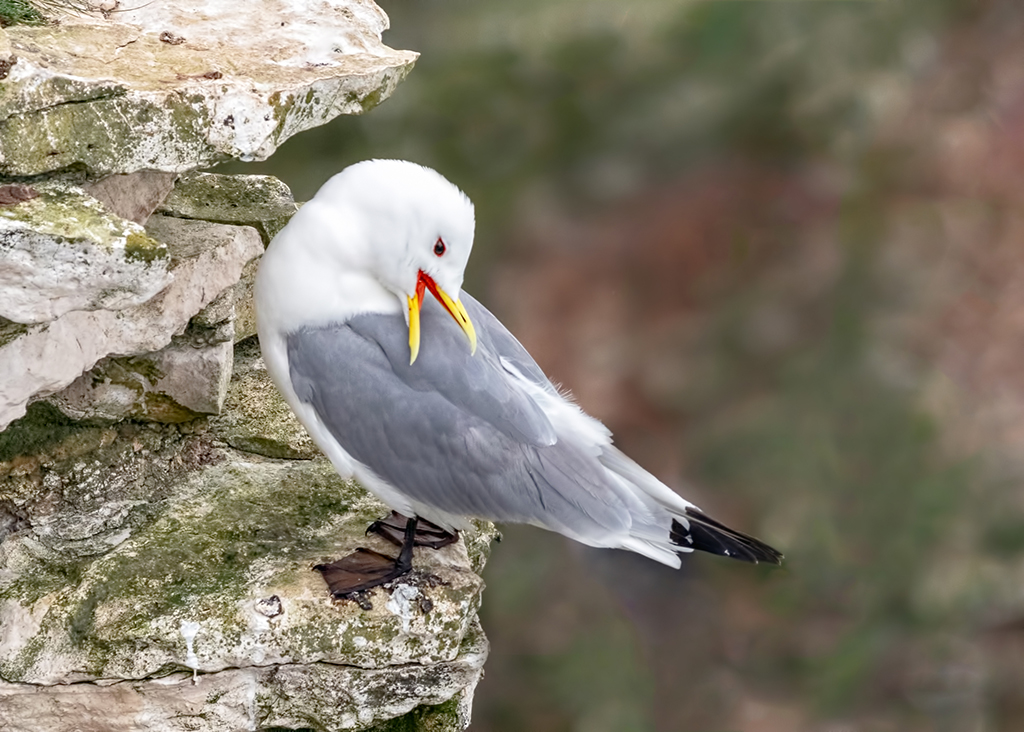 One of the best gull species in my opinion, is the Kittiwake which makes itself welcome here every summer to breed along the Mumbles Pier and around Gower.

Kittiwakes are usually a cliff nesting species with their nests, containing two eggs being created out of seaweed, mud and a grass-like material found within the area. These beautiful, elegant, birds are not the most hygienic with their nests being trampled and soiled with droppings resulting in a very fishy smelling colony. Pairs create their nests on ledges and in the cracks of the cliff faces to create a kittiwake colony, although another easy way to identify this species is to listen to its signature call ‘kittiwaaaake’ as it flies around the pier. 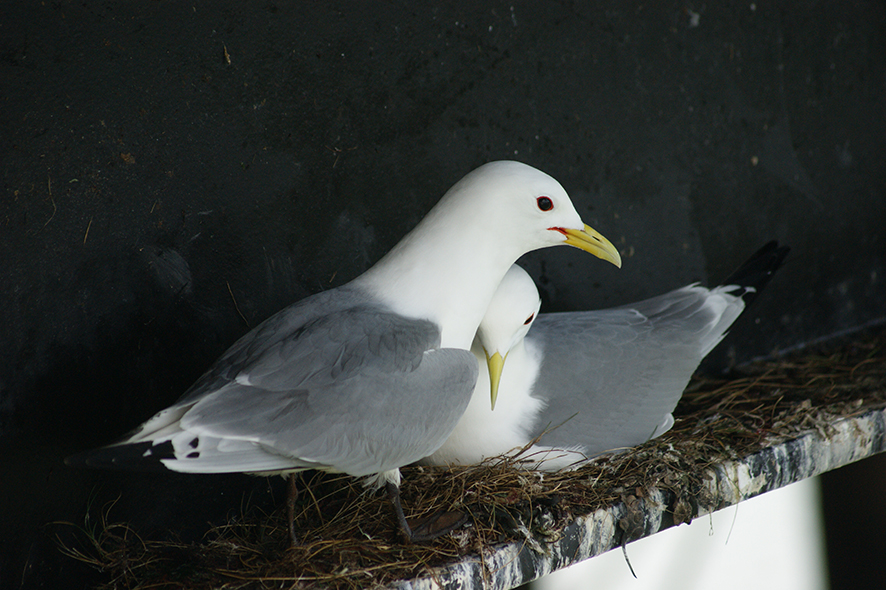 Looking at the adults, they are a light grey colour on their mantle – the colour on the tops of the wings – and a glistening white colour below and on their heads, their wings are adorned with black wingtips.

Juvenile birds are similar although have a signature ‘W’ shape in black across their wings with a black neck-collars and a thick black band on the end of the tail. Coastal breeding sites are ideal for these sea-loving gulls that spend the majority of their time out at sea and wintering as far as the Atlantic, their sea-based diet mainly consists of fish, shrimps and worms however they don’t use landfill sites like other species of gull in the UK – they are true sea-gulls.

Among the nesting kittiwakes, there’s a structure that the birds follow. Birds that nest and breed in the central part of the colony are pairs that are established and have been together for several years. 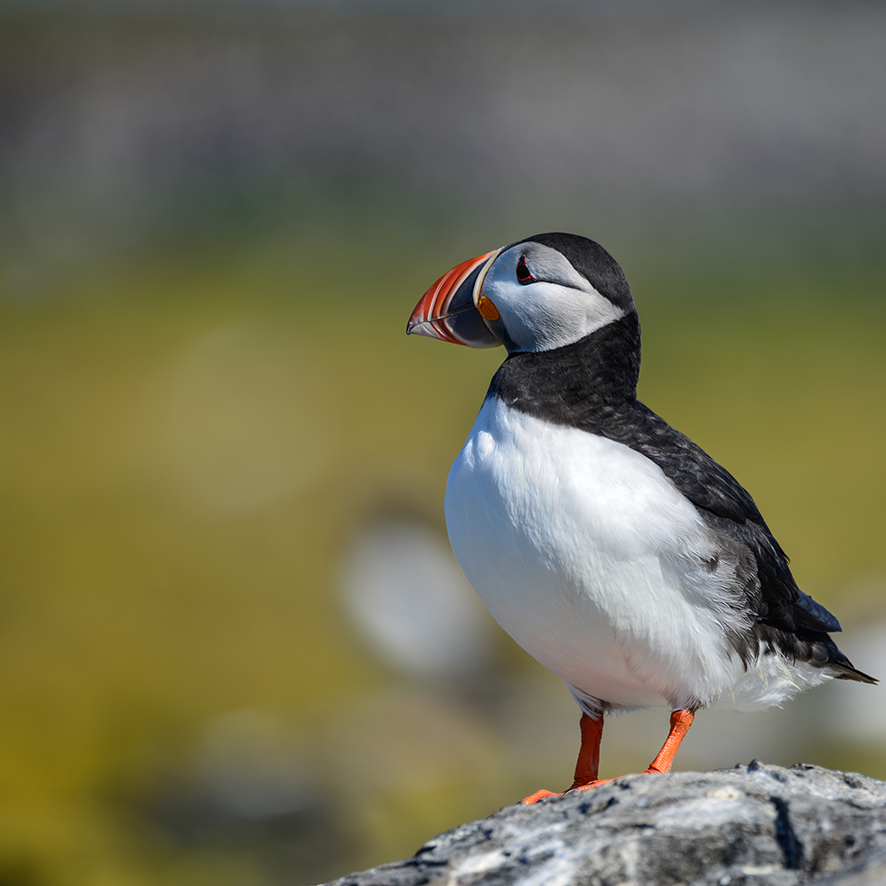 Kittiwake parents both share the nesting duties, although with less mature pairs they don’t often share the duty of parenthood equally. This is shown through the higher success rate that more mature and established pairs have, as they share the duty of nesting more equally. meaning each adult has time alone at sea to feed themselves as well as bringing the chicks food once they hatch. This successful way of parenting means the chicks are not left alone for periods of time and both parents are having enough food for themselves and their offspring.

Some very concerning news came from a study in 2017 which has only deteriorated since then, black-legged kittiwake, our gentle gulls have joined the IUCN Red List of endangered species along with our iconic Atlantic puffins (pictured right)- with the kittiwake declining around 50% in the past 30 years. 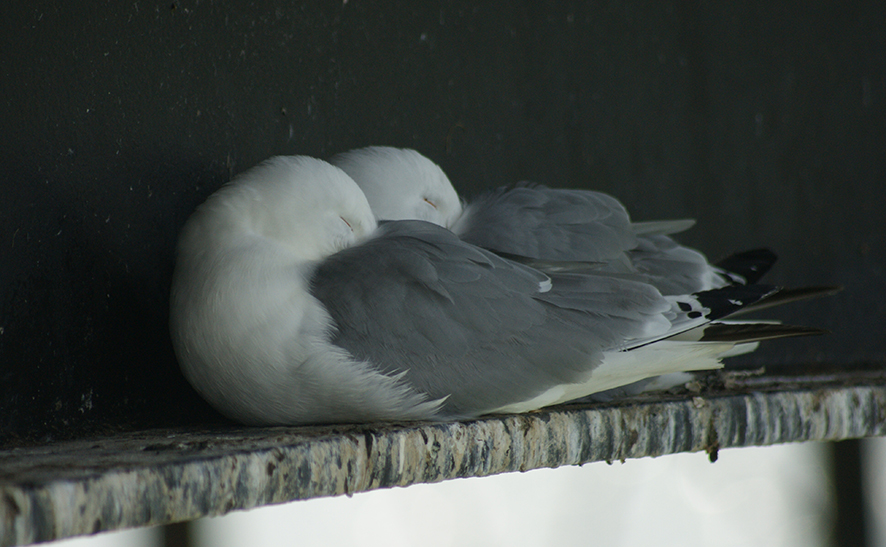 With 380,000 breeding pairs and 8% of the world’s breeding population of the species in the UK, kittiwakes are still considered one of the most numerous breeding gulls that we have here, although that is a severely worrying statistic given that they are a member of the IUCN Red List, and a drastically declining species.

The decline can be linked to the change in marine environment and culture. Around Wales they particularly eat sand-eels and other small shoaling fish which are nutritious and make up the main part of their diets. The start of the breeding season can be delayed by weeks when prey is harder to find, with some pairs giving up on the idea of raising young through a lack of food.

Another issue is the way we treat our oceans, many seabirds’ demise is down to ingesting plastics or, dying by starvation through being caught in plastics and discarded fishing equipment, it’s not just the underwater life that is struggling due to the amount of plastics and non-biodegradable materials being tossed into our oceans, but many bird species too.

Western colonies like the one in Swansea and on Gower, along with the island colonies in Pembrokeshire are faring somewhat better than those in Scotland and England due to the amount of sand-eels that are found, within the Irish Sea.

Where can you see them:

Mumbles Pier is the best place to see these elegant gulls, as you walk along the pier to the very end you will see the lifeboat station. From this area you can see the nesting kittiwakes on their specially designed platforms that are attached to the old Pier, and around the old station. Walking along the pier you will have them swirling around below you bellowing out their ‘kittiwaaake’ calls! This year, it’s slightly more difficult as the pier is being refurbished and access is restricted, but you can still pop along to the café and watch them from the base of the pier.

Another location to see them is at Worm’s Head in Rhossili. This has cliff nesting seabirds such as guillemots (above left), razorbills (above right), herring gulls and also the kittiwakes! It’s a brilliant sight to see and definitely worth the walk along the Worm itself. During April-October it’s prime time for breeding birds so visitors are requested not to climb around the seabird colonies but instead to watch from a distance, which is the best way to watch as you are less likely to miss the swirling masses of parents coming to exchange babysitting duties.