THIS MONTH I AM STARTING A SHORT SERIES OF OUR FAVOURITE TAKEAWAYS. THE FIRST ONE I AM LOOKING AT IS FISH AND CHIPS. 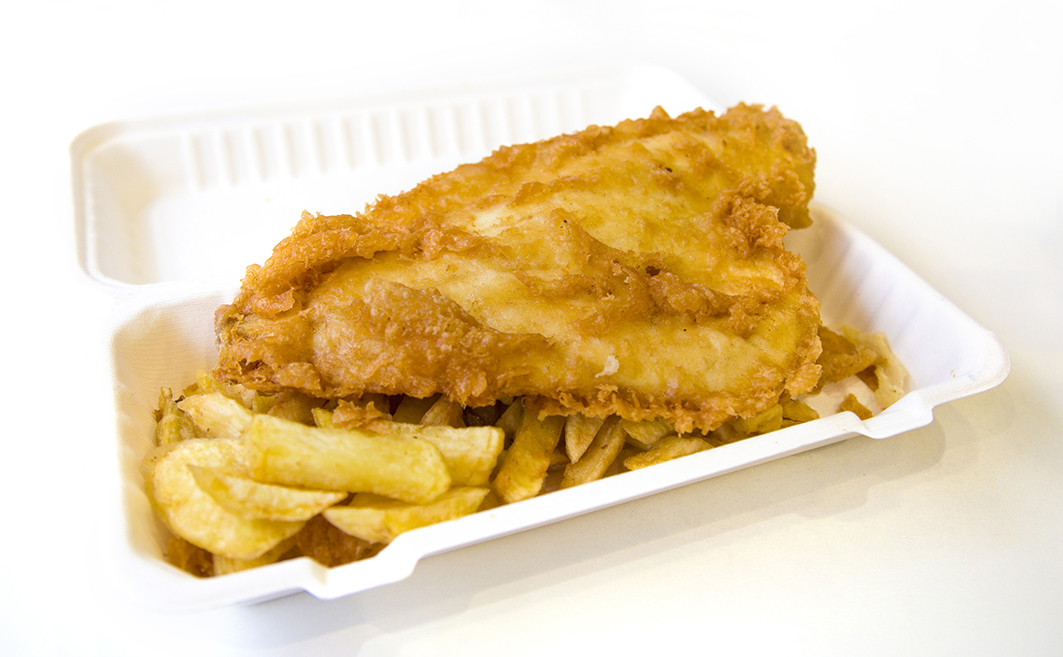 Firstly, we’ll look at a little history of takeaways. The origins of the takeaway date back to Roman times. In the ruins of Pompeii, there is evidence of thermopolia. These were cook shops providing hot food for those who didn’t own a kitchen or chose to have their meals there. They had a reputation for being patronised by the lower classes as the Roman upper-classes, had relatively well-equipped kitchens often operated by slaves. 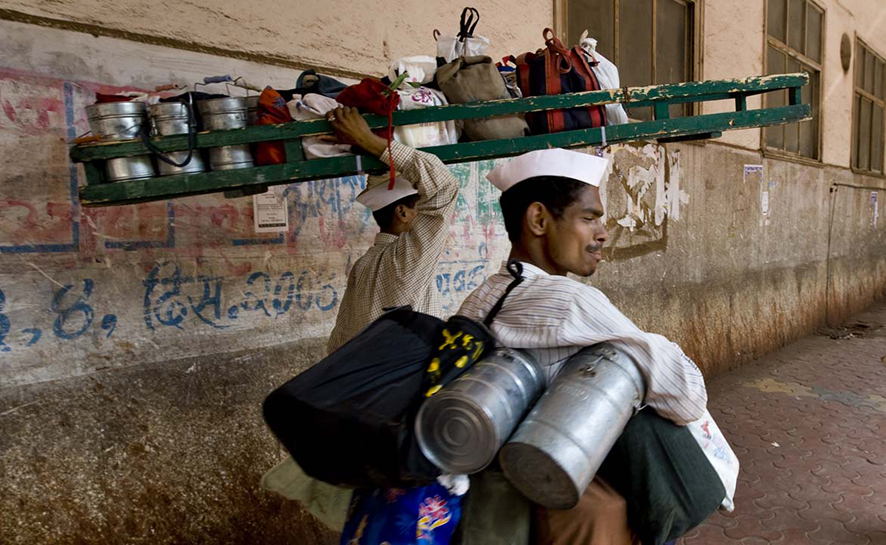 It wasn’t until the 1880s in Italy when King Umberto and Queen Margherita received the first known pizza delivery, from the famous pizza maker Raffaele Esposito. The pizza, which was garnished with tomatoes, basil and mozzarella cheese, was named a Margherita after the Queen.

In 1890 in Mumbai, Mahadeo Havaji Bachche started a lunchbox delivery service. His team of 100 men known as dabbawalas (pic left) would deliver an aluminium box of hot food to local workers. The empty boxes were returned and reused. This service continues today with approximately 200,000 boxes being delivered every day – that’s some delivery service! 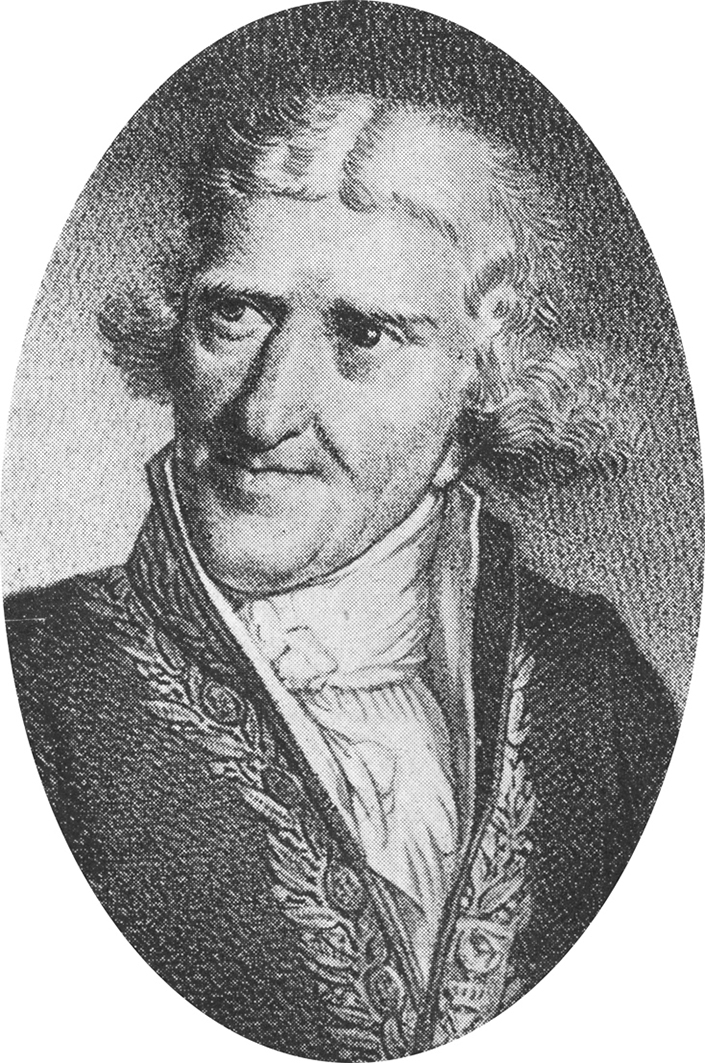 So where did our traditional fish and chips originate?

One of two men, either Sir Walter Raleigh or Sir Francis Drake is credited with introducing the potato to Britain when returning to the court of Queen Elizabeth I, during the 1580s. Potatoes didn’t have a good start as they were thought to be poisonous. In fact, it wasn’t until 1772 that potatoes were considered fit for human consumption – before this they were only used as animal fodder. It was French botanist and chemist, Antoine-Augustin Parmentier (right) who promoted the potato and today any dish that is described as Parmentier contains potatoes. Before losing his head Louis XVI, gave Parmentier acres of land to grow crops; this encouraged people to grow them for themselves and potatoes became a popular food source.

Ireland suffered two potato famines, in 1845 and 1849. Scores of people emigrated either to the UK, across the Atlantic to North America or to the other side of the world, Australia. Here in Swansea, Greenhill was known as Little Ireland and was the focus area where the Irish settled. 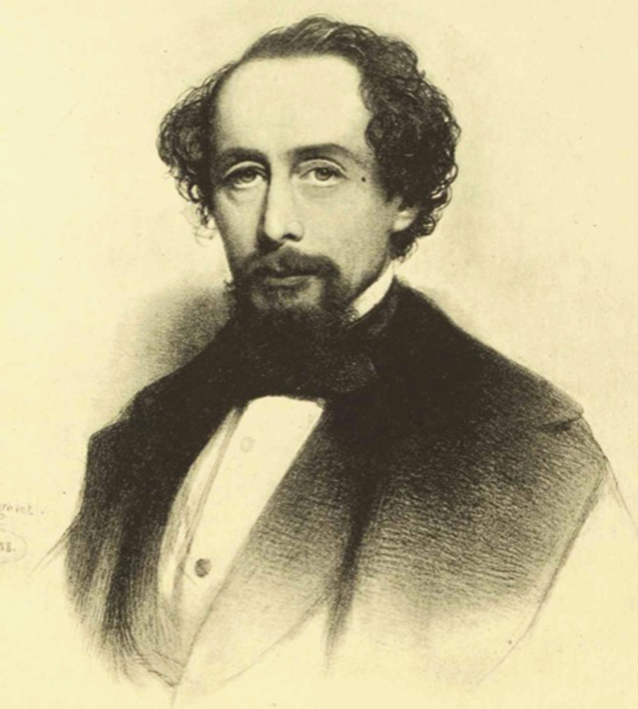 A decade later in 1859, Dickens (left) publication A Tale of Two Cities, is credited with the first use of the word ‘chips’, describing them as ‘husky chips of potatoes, fried with some reluctant drops of oil’ (Chapter 5 – The Wine Shop).

Now we turn our attention to fish. The tradition of fried fish was brought to the UK, during the 17th century by the Jewish community, and it was their custom that the fish should be battered so it could be eaten cold on the Shabbat.

The fishing industry was a very hard life for those small fishing communities around the country, this is evident in the BBC programme ‘The 1900 Island’. With the advent and development of the railways, fish could easily be distributed around the country. Sadly, the number of fishing ports has been in a steady decline over the years, but fishing fleets are still to be found around the UK coast.

Fishing trawlers would have been at sea for days on end; when they came home the fish would be processed and packed and taken to a dockside warehouse. We turn yet again to Charles Dickens, who refers to a fried fish warehouse in Oliver Twist (1838) (Chapter 26 – In Which A Mysterious Character Appears Upon the Scene……….).

We have now got the two main food sources, but who is responsible for bringing them both together?  Both Joseph Malin, from London, and John Lees, from Mossley, near Manchester are credited with doing this during the 1860s.

Some families turned their front rooms into fish and chip shops. How many families did this, here in Swansea?

The typical ‘common’ fish served with chips, are cod, haddock, hake and plaice. During the Second World War, fish and chips were one of the very few foods that weren’t rationed as they were an invaluable supplement to a family’s weekly diet. Winston Churchill referred to them as ‘the good companions’.

During the D-Day landings, British soldiers identified one another by calling the word “fish” the response signifying an ally was “chips”.

Traditionally fish and chips were wrapped in yesterday’s newspaper, but during the late 1980s this practice was stopped because of concerns that the printer’s ink would contaminate the food!

Fish and chips remain a very popular takeaway choice in the UK although the number of shops has declined in the past 90 years from 35,000 to 10,500. 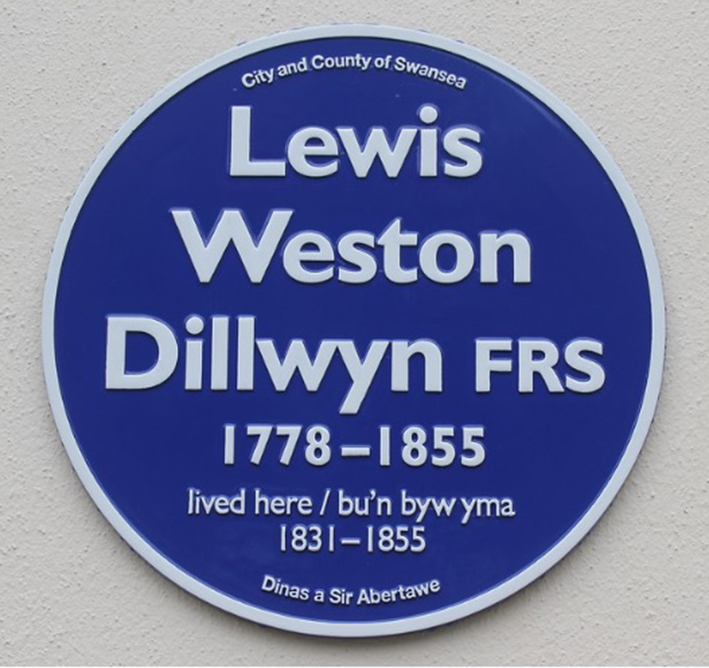 THIS MONTH WE HAVE TWO MEMBERS OF THE DILLWYN FAMILY TO HAVE BLUE PLAQUES COMMEMORATING THEM.

Sketty Hall (below), situated in the north-west corner of Singleton Park, was built during the first half of the 18th century probably by Rawleigh Dawkin (later Mansel). The original house was called New Hall. 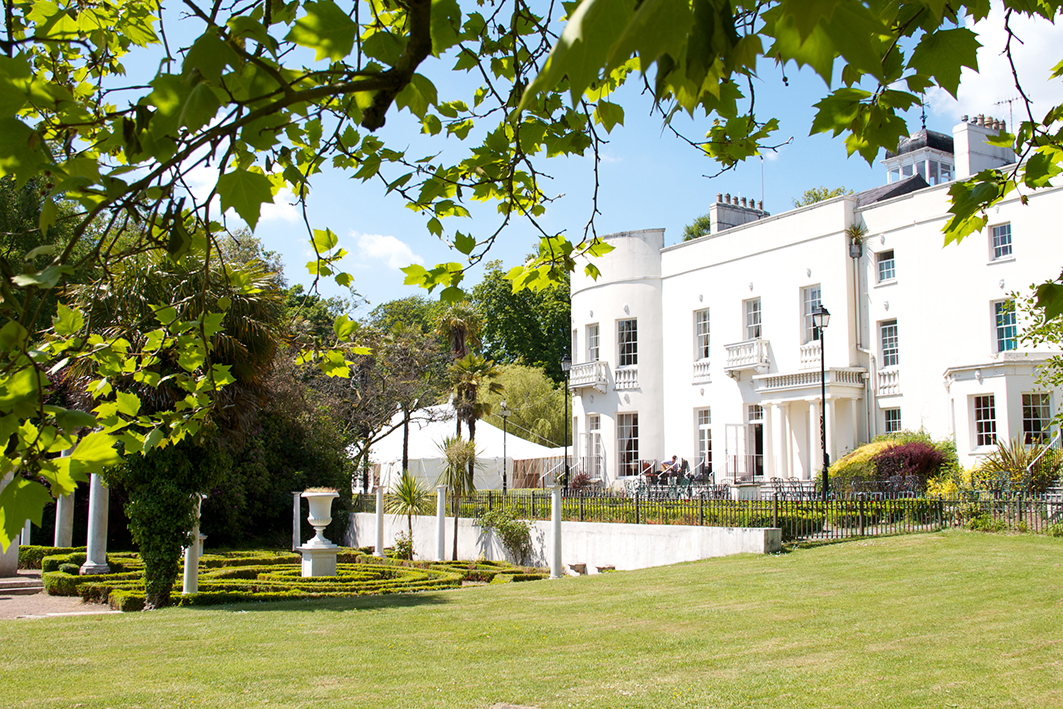 After Rawleigh’s death in 1749, the house was pass-ed to his brother Mansel Dawkin (later Mansel).

They were the sons, of William Mansel Dawkin squire of Kilvrough Manor, Gower and Mary Mansel.  After Mansel’s death in 1767, Ralph Sheldon took a lease out on the property. Sheldon of Weston, Long Compton was the MP for Wilton, Wiltshire for a period of 18 years (1804-1822). During his tenancy at the Hall, Swansea architect William Jernegan, was employed to add a large block to the west end.

During this new development New Hall was referred to for the first time as Sketty Hall. Sheldon died in 1822.  In 1823, Sketty Hall was sold to Charles Baring, a family member of Baring Bank, the oldest British merchant bank founded in 1762 until its collapse in 1995. Baring seems to be a man of mystery, as I can’t find any information in regards to who he was. The only thing I have found is an application for a Gamekeeper for Sketty Hall during 1823, when he purchased the property, and the final entry is in the trade directory during 1830, the year before he left. During his tenancy, Baring made extensive changes to Sketty Hall, which included an additional extra floor, to the original house. The architect is unknown. 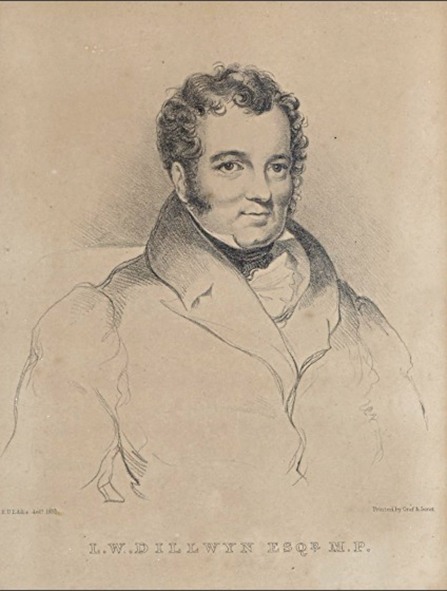 The next owner of Sketty Hall in 1831, was the proprietor of the Cambrian Pottery and keen naturalist, Quaker Lewis Weston Dillwyn (left), who bought the property for £3,800 (£426,600 today). A blue plaque placed on Sketty Hall commemorates Dillwyn. Architect Edward Haycock was employed; he changed the main entrance from the south side to north, as it is today. Dillwyn’s only connection with Swansea was a family connection to George Haynes. Haynes was the managing partner of Cambrian Pottery in 1786, becoming sole proprietor trading under the name of Haynes & Co. In 1802, William Dillwyn, father of Lewis invested a large amount of capital into the business, with his son Lewis, taking an active role in the business also taking instruction from his father. By 1810, Haynes terminated his arrangement and left the business, thus making Dillwyn the sole manager. After the purchase of Sketty Hall in 1831, Lewis, was one the founders of the Royal Institution of Wales. Lewis died at Sketty Hall in 1855, and is buried at the Quakers Burial Ground, Tottenham. The Hall remained empty for 17 years until 1872 when Frank Ash Yeo, took the leasehold. Yeo was a colliery owner, and director of Swansea Bank and Swansea Blast Furnace Company, and in 1874 was Mayor of Swansea and in 1878 Chairman of Swansea Harbour Trust. During his tenancy of Sketty Hall, he added a dining hall at the east side of the north side. Yeo died in 1888.

Sketty Hall again lay empty till 1898, when the freehold was bought by the then 63-year old Richard Glynn Vivian. All of the works that were carried out by Vivian were done before 1902, when he went blind. He added the Italianate detail and balconies; the parapets were extended with continuous balustrades and urns. Vivian died in 1910, and Sketty Hall was left to his sister-in-law, Averil Vivian. Her daughter and son-in-law, Violet Averil and George Tryon lived here. Sketty Hall and 35 acres of land were sold in 1936 to the County Borough of Swansea. 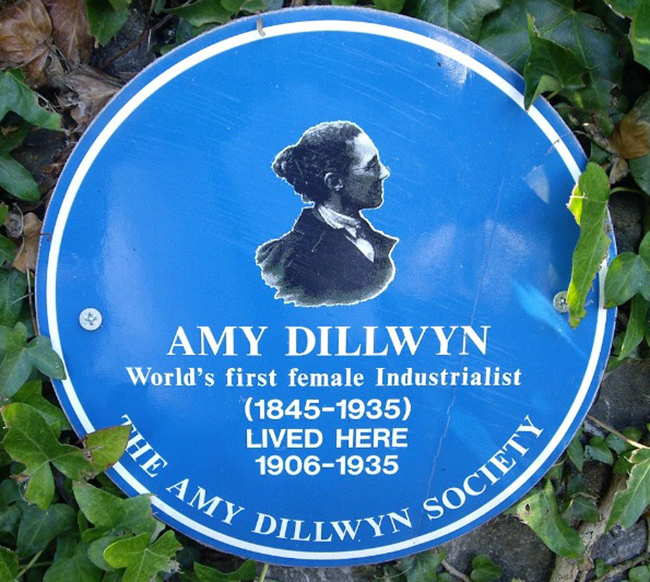 Situated on a wall at the entrance of a Nursing Home on Mumbles Road, is a blue plaque commemorating Amy Dillwyn. Amy was born Elizabeth Amy Dillwyn, at Hendrefoilan House, Sketty in 1845. She was the daughter of Lewis Llewelyn Dillwyn and Elizabeth De la Beche. De la Beche Road in Sketty is named after Elizabeth’s father Henry De la Beche, a geologist. Amy’s grandfather was Lewis Weston Dillwyn. 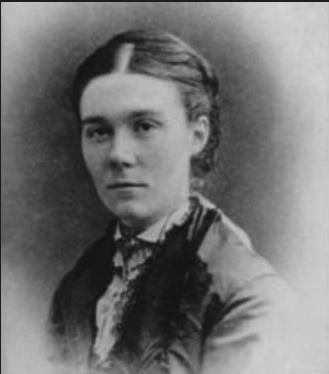 Amy (left) the business-woman, is remembered for securing 300 jobs at her father’s zinc-smelting works. At the time of Lewis Llewelyn’s death in 1892, the works situated at Llansamlet, was in financial difficulties with a deficit of £100,000 (£10,680,000 today). The works were established in 1858. Lewis Llewelyn’s creditors were compensated in 1896 when the works were under the administration of Amy and James Cortfield, manager. By 1902, the works were known as Dillwyn & Co. It made a huge turn-around making it one of the largest producers of zinc in the country, with annual profits of £10,000.

Amy the social benefactor is remembered for being a supporter of social justice, including better education and votes for women, and supporting workplace improvements. During 1911, she called for a boycott of Ben Evans, where striking seamstresses were protesting against their working conditions.  Also, during 1911 Amy along with Roger Beck each laid a commemorative stone at the Swansea Ragged School in Pleasant Street. Amy was also one of the earliest members the National Union of Women’s Suffrage Societies. 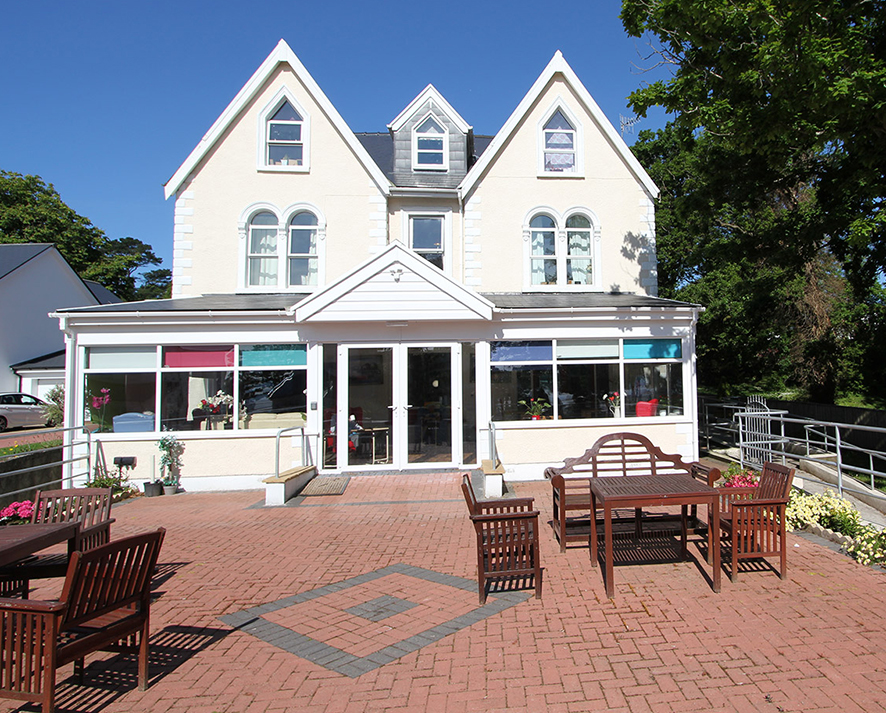 Amy never married after her fiancé, Llewelyn Thomas’ death in 1864, but she had a close friendship with Olive Talbot, one of the wealthiest women of Wales. In her will, Amy left an estate valued at £114,513 7s 9d (£7 million today). Her ashes are buried in her parent’s grave, at St. Paul’s church, Sketty.

The blue plaque was unveiled by The Amy Dillwyn Society