If it’s a summer walk you’re looking for, then where better a place to base it from than Tenby? Is there a more picturesque or photogenic seaside town in the whole of the UK? I doubt it. Polperro? Yes ok, Polperro. Clovelly? Yes, good point. Beautiful place Clovelly. Fowey. Ok, ok Fowey too. Look, I’ll rephrase it – Tenby is a really picturesque and photogenic seaside town, rivalling anything the UK has to offer. There you go. The way the multi pastel coloured Georgian buildings tumble down to the harbour side with pleasure craft bobbing on the crystal-clear blue sea; pristine sandy beaches a magnet for summer holiday makers; and the medieval walled town with its narrow streets with pubs restaurants and not-too-tacky tourist shops makes the place an absolute joy. It just gives out a great vibe. I love it. When a man (or woman) is tired of Tenby, then he (or she) is tired of life as the old saying goes – well sort of. 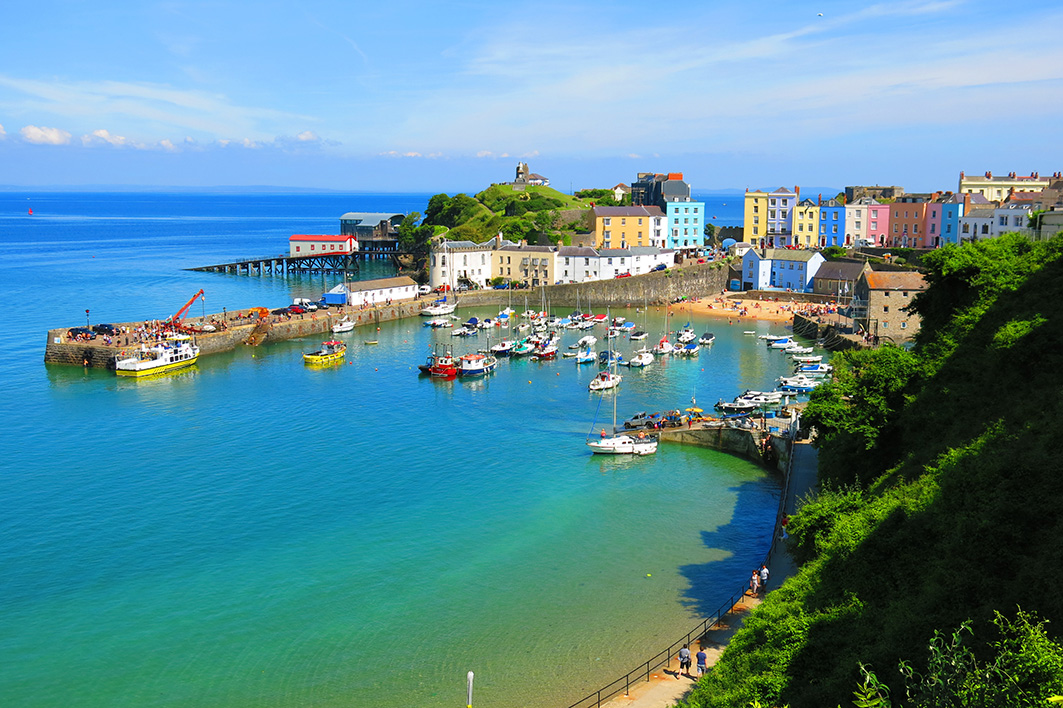 I ‘d wager that most people reading this have their own fond childhood memories of the place. Mine are sunny carefree summer days in the late 60s early 70s, the sun shining down on the crowded beach, boat trips and a visit to the small zoo on the headland (remember that?) an ice cream from the van that actually came onto the beach and looking dreamily out at Caldey island imagining having a Famous Five type adventure there. And lashings of ginger beer of course. Happy days, eh?

One particular memory however, is a little less idyllic. Just after my university days, a couple of mates and I went camping there for the weekend. My immature mindset was still in student mode when drunken japes were still regarded as big and clever. So, walking back to the campsite at night after a couple of beers I suggested we, er, ‘borrow’ an estate agents For Sale sign from someone’s front garden. However, unbeknownst to us, the Police were on our case and as we were in the midst of the process a squad car came screeching to a halt alongside us and it was then that we felt the full arm of the law. We were literally pulled by the fuzz (Ed. There was a rude joke here, but I’ve pulled it!).

The next 6 hours were spent in the Police station where we protested our innocence from separate cells. From mine, where I cowered in fear, I could hear the other two trying to buy their freedom; one, who was an electrician, by offering to fix their malfunctioning fluorescent light fitting whilst the other protesting indignantly that they couldn’t arrest him because he was a deputy headmaster! Anyway, in the absence of a confession and a lack of evidence we were released without charge with our tails placed firmly between our legs chastened by the experience. 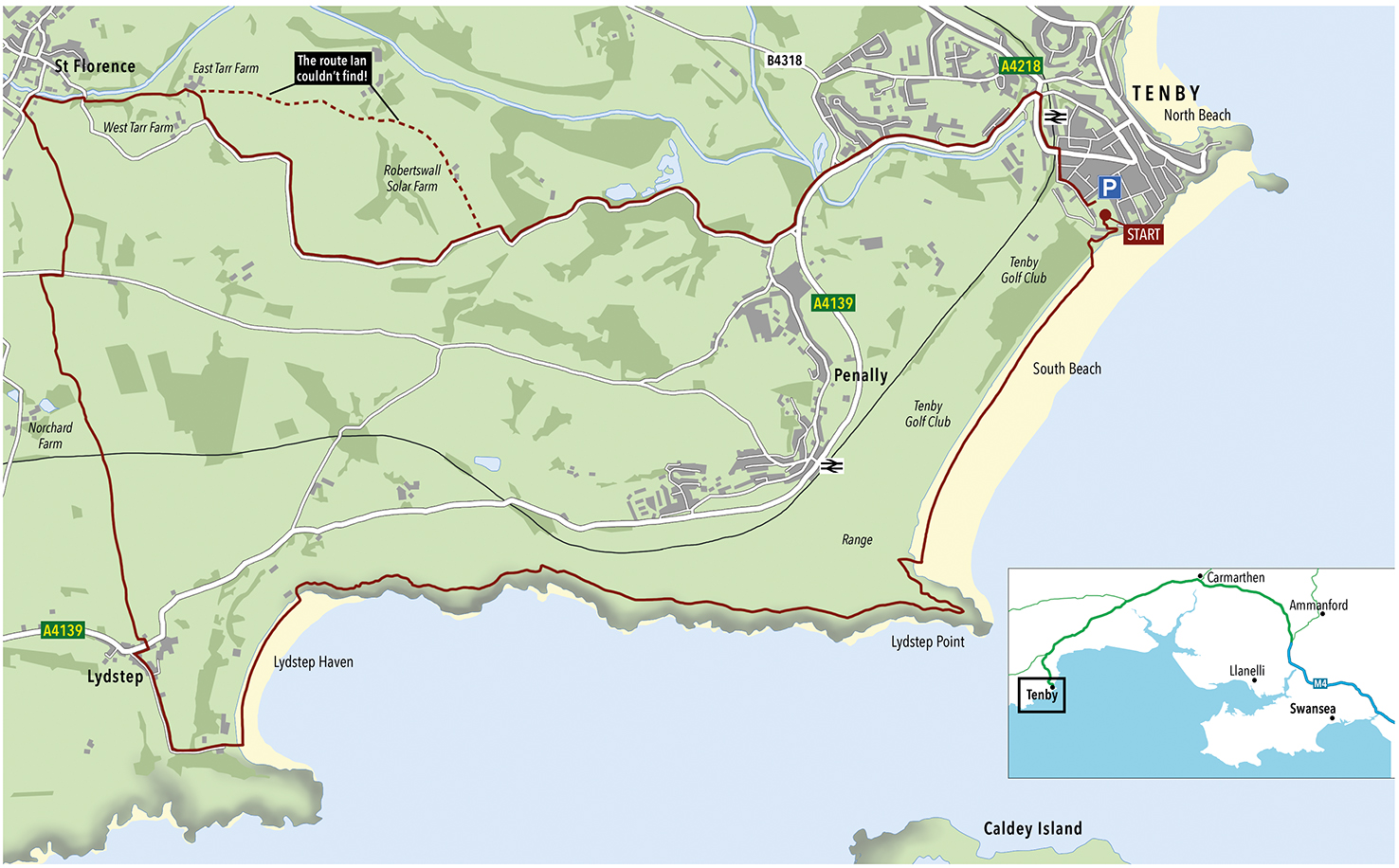 Anyway, enough of my criminal past, let’s get on with the walk. You can start in the town where you’ll have the best chance of parking (or get the train from Swansea – you can have a few beers then!). Head to the South beach and walk either along the sand or the path which bisects the railway line and the golf course. Whichever you choose, your target is the headland straight ahead. Once you reach it look out for the path from the beach which leads you the top and then just follow the coast all the way around Lydstep Point and beyond. On the way you’ll have a lovely view of Caldey, one of the UK’s holy islands, which continues to be occupied by a number of Cistercian monks carrying on a tradition which began there in Celtic times. 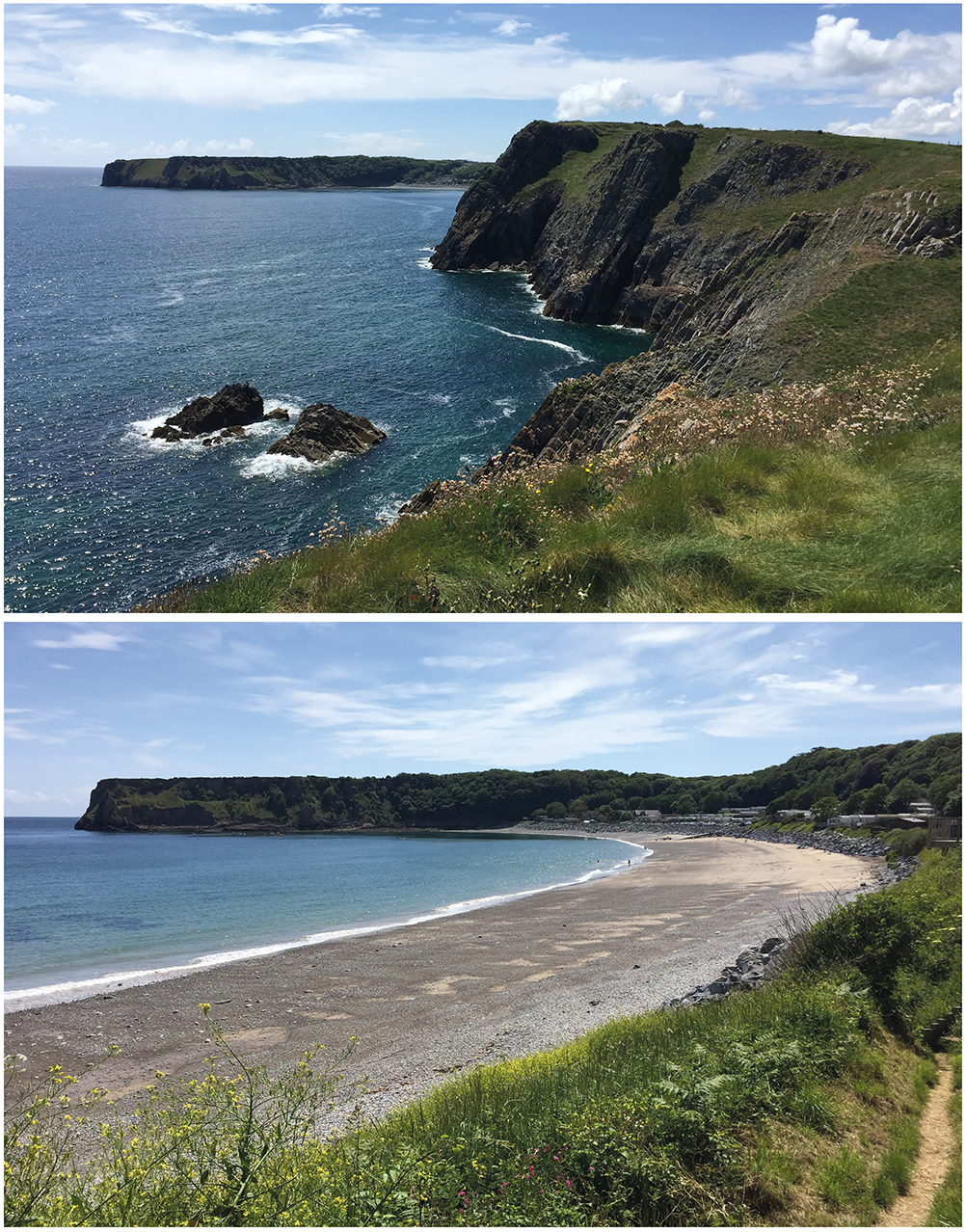 The path swings around to the right so that the rugged South Pembrokeshire coastline is to your left. On your way, you’ll pass the army firing range at Penally so it’s a good idea to check they’re not firing that day otherwise things could get a bit playful. If you wanted to do a shorter route, then there’s a path turning sharp right along here which returns you to Penally alongside the railway line and then on to Tenby. After a few miles you’ll descend into the bay at Lydstep. Now, I’m going to be controversial here. I found this place rather strange.

Whilst it is undeniably beautiful, a gorgeous crescent of a bay with its pure blue sea cupped by a lush green backdrop, it’s pretty much totally given over to a regimental settlement of mobile homes. When I was there on a sunny Sunday afternoon in early June (yes, there was a sunny day in early June) there was hardly a soul in sight. It was spookily deserted, and I have to say rather sad. I’m sure in the height of the season it’s joyful, but on that day it seemed to be a place lacking soul. Apologies if you have a place there!

Above left to right: Follow the path from the beach / Over the stile with the ridge in the distance / Carefully does it over the railway track

At the far end of the beach, take the road which leads you out of the bay and into the village of Lydstep where you now leave the coastal scenery behind. Ahead will be a charming cross-country walk, through farmland and woods teeming with wildlife, insects and plant life. It’s got a truly summer feel to it. Turn right onto the main road and after about 100yds and opposite the pub, look out for the path alongside the grandly titled Lydstep Palace. But don’t get too excited, it’s but a ramshackled ruin of an old manor house of no particular interest to the casual observer. Your route from here to St Florence is basically a straight line over the ridge on the horizon and down the other side via a number of farmers’ fields so please take great care in avoiding stamping over the growing crops. So, over a stile and shortly you’ll come to the railway track which you cross carefully – which goes without saying. You’ll be faced with two stiles in front of you – take the one to the right into a field.

After a short distance you’ll come to a series of stepping stones and as your path straight ahead is blocked, go to the left then immediate right after the next stile keeping the hedge to you right. You’ll cross a few more stiles and go right over a collapsed gate which seems to have become absorbed into the ground and then left hugging the hedge which is now on your left. You’ve entered a field of red earth reflecting the bedrock around here and its where you start to climb to the top of the ridgeway ahead. Once you reach the top of the ridge, you’ll come to a road where you turn right, taking great care of course. Then after 100 yards or so look out for a path on the left. At this point the North Pembrokeshire countryside comes into view. 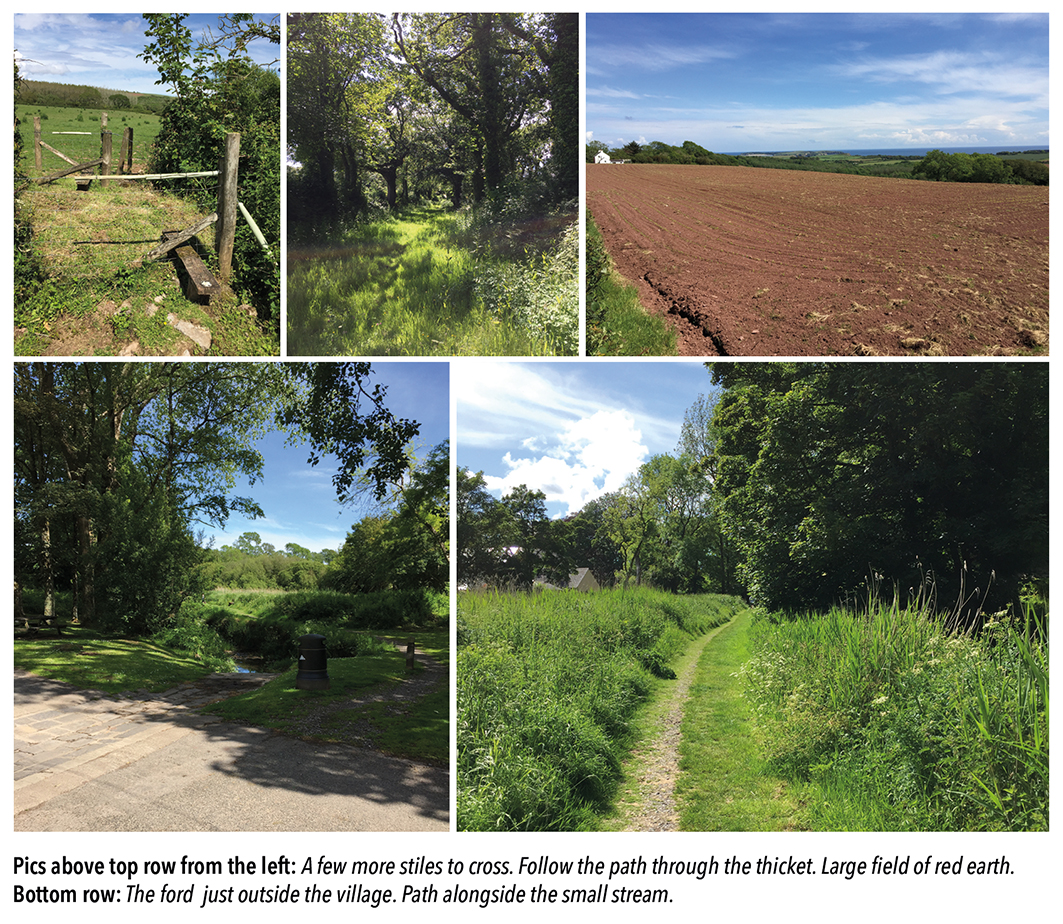 Into the field where you start to descend the other side of the ridge. Keeping the hedge to your left, you enter a thicket and exit via a stile just after a fallen tree. Keeping left of the field you’ll come to a very muddy section, full of mud and manure. Sorry. Through the gate and after 100 yards or so, look out for a stile on your left, which you cross into the neighbouring field turning right as you do so. This takes you into the village of St Florence. Take the first road turning to the right, following a signpost directing you to a ford. Now, by taking this path you bypass the village so if you want to take a look then by all means do so, but if you do, return to this point. Down the road turn right along a rather pleasant tree lined path alongside a small stream. After a short distance you’ll come to a road where you look out for a yellow marker directing you through some woods. Follow the waymarks until you emerge by the East Tarr Farm which now appears to be a series of holiday cottages. There is a path going cross country at this point, but I couldn’t find it (I ran out of time to be honest, as my car park ticket was running out!) so took the easy route back to Tenby by following the road to the right. It’s a good couple of miles along here although it’s quiet enough, but you will inevitably encounter a vehicle or two so take care.

So back to Tenby where you can enjoy town itself, whether it be people watching from the cafes and pubs or visit the shop with the largest fridge magnet collection in Wales. Well, I was certainly attracted to it. But whatever you do, please leave the For Sale signs alone.