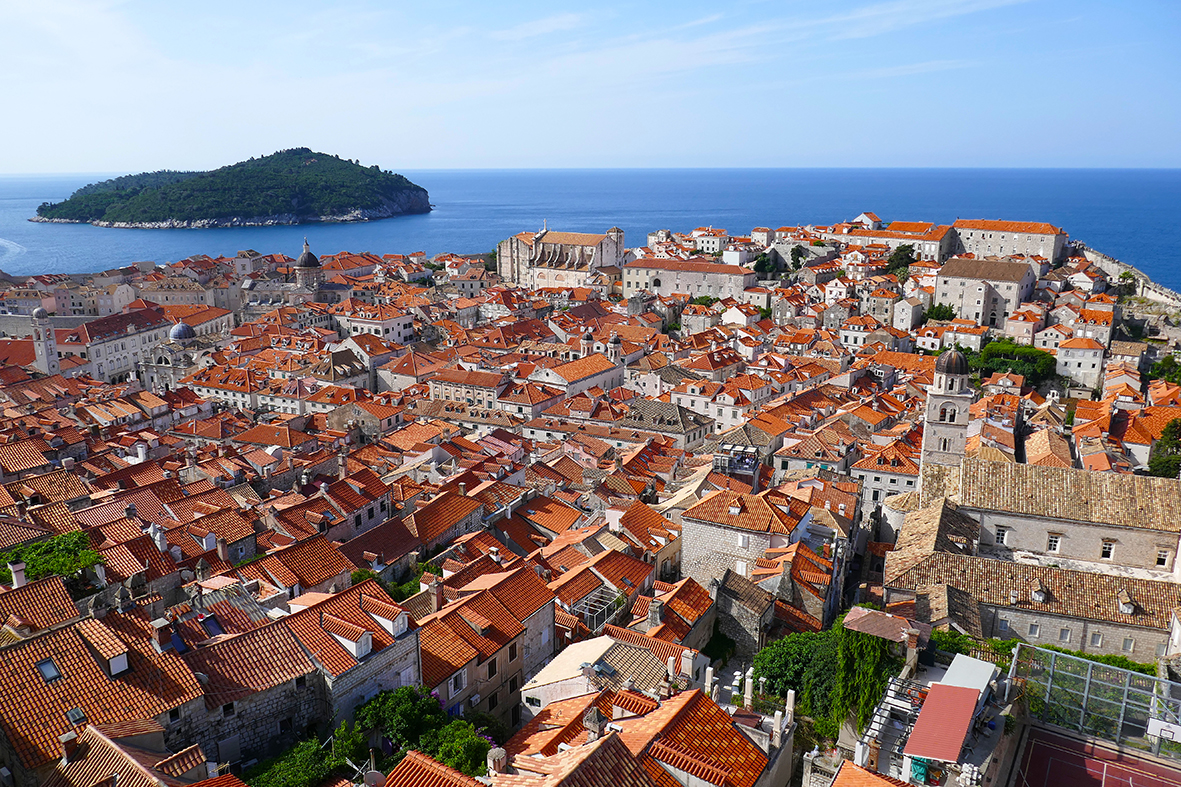 A bird’s eye view of Dubrovnik, taken from the high city wall that surrounds the old city, with the beautiful island of Lokrum just off the coast

Lapped by the glittering waters of the Adriatic, Dubrovnik’s city walls conceal stories of conquests, cultures, history and Mediterranean gastronomy. 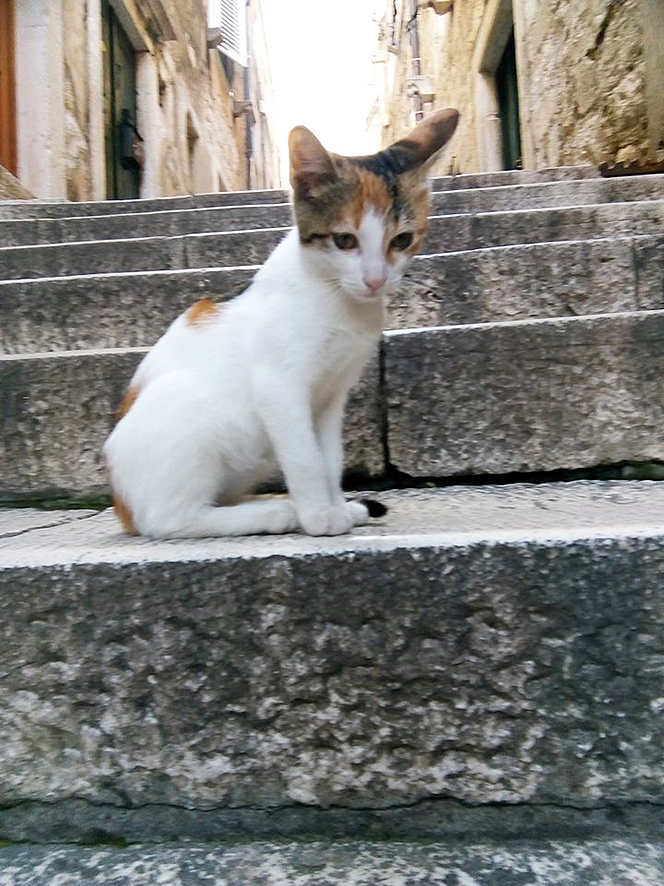 The walk takes around two hours, so is better done in the early morning or late afternoon when the temperature is cooler, as there are many steps to climb. Fortunately, there are several cafés where you can stop for a gelato or a cool drink. One tip is to fill up your water bottle at Onofrio’s Great Fountain, a 15th century water feature near Pile Gate before you start your ascent.

There are several points of entry onto the walls via steep stairways that reach an elevated platform, as you can imagine from this height the panorama of the city is breath taking, especially as the red roof tops contrast against the deep blue of the surrounding sea. We watched as tenders arrived into the Old Port from the cruise ships at anchor in deeper waters, and the Placa, the main thoroughfare in the old town, began to fill with visitors.

Throngs of people walk through the Gothic style Rector’s Palace, now a history museum which also showcases art collections; the Baroque architecture of St. Blaise Church, where at night people gather to sit on the steps and listen to musicians entertaining diners in the outdoor restaurants and bars. 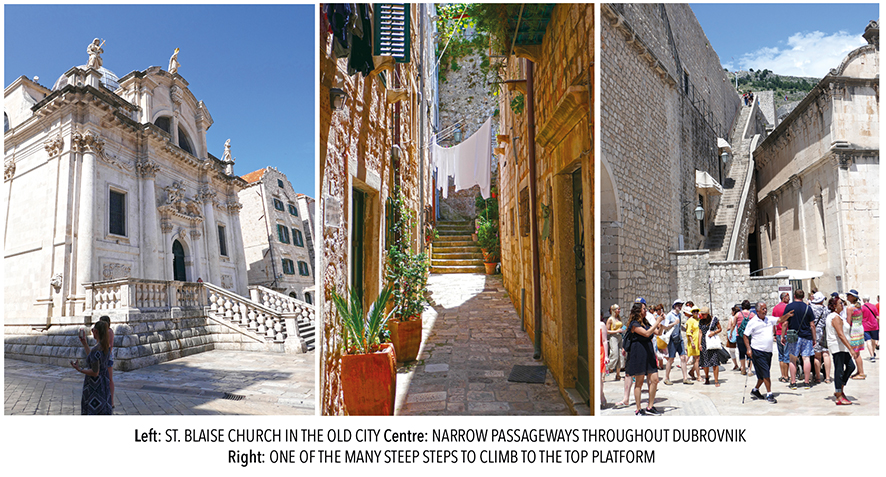 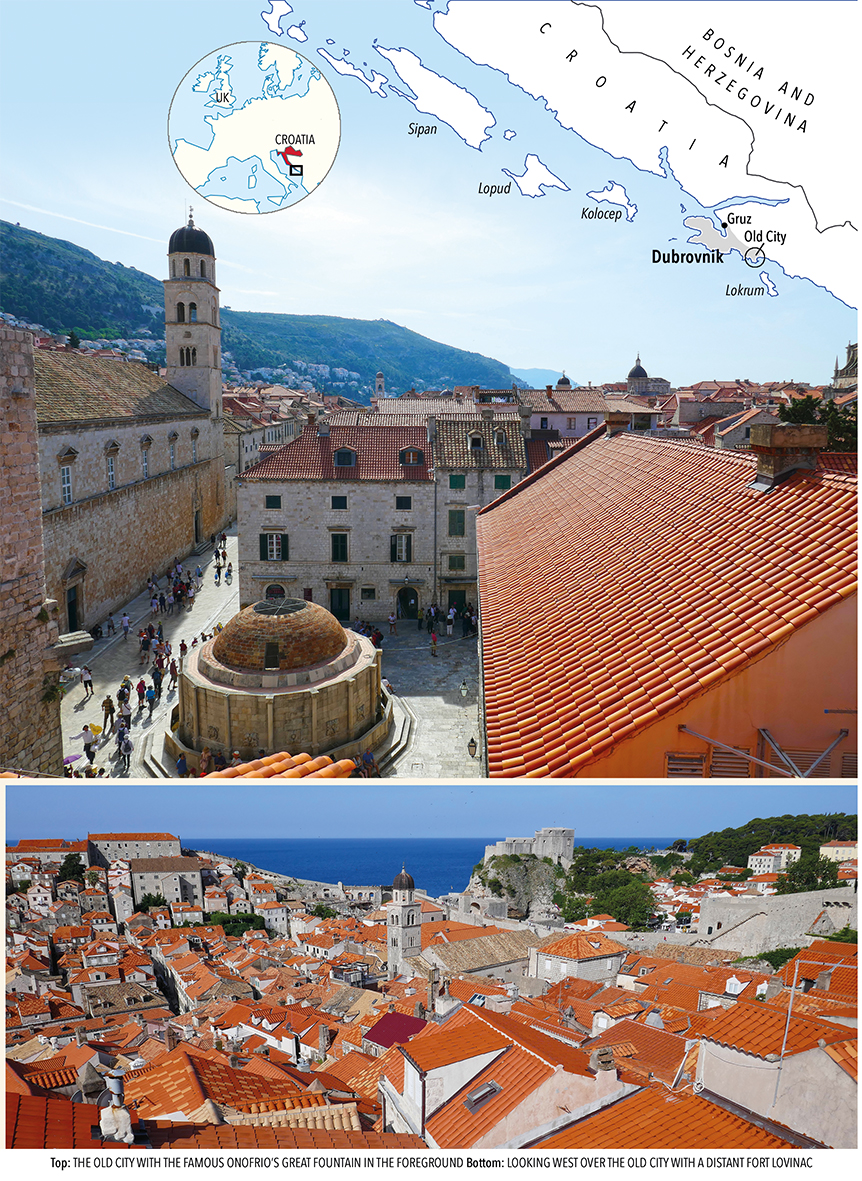 From this unique vantage point far above the city you have a bird’s eye view of the churches, bell towers, side streets, small gardens and buildings that date back to the middle ages. Dubrovnik remained almost intact for centuries until almost 30 years ago when it was badly damaged during the 8 months it was besieged by the Yugoslav People’s Army, between 1991 and 1992 during the Croatian War of Indepen-dence (or the Homeland War). There were many deaths both civilian and military as shells fell on the old city from the hill above. Over 11,000 buildings were damaged, though you would never know as the restoration work has covered the scars of war. Just inside the city walls a map shows how many buildings were damaged during the bombard-ment and around the city there are information points with photo-graphs telling the story of this tragic period.

Today the city is quite famous for another reason; Dubrovnik is King’s Landing, capital of Westeros in HBO’s hit show Game of Thrones. Tours are available to visit the film locations and there are numerous well stocked shops selling merchandise if you are a fan. 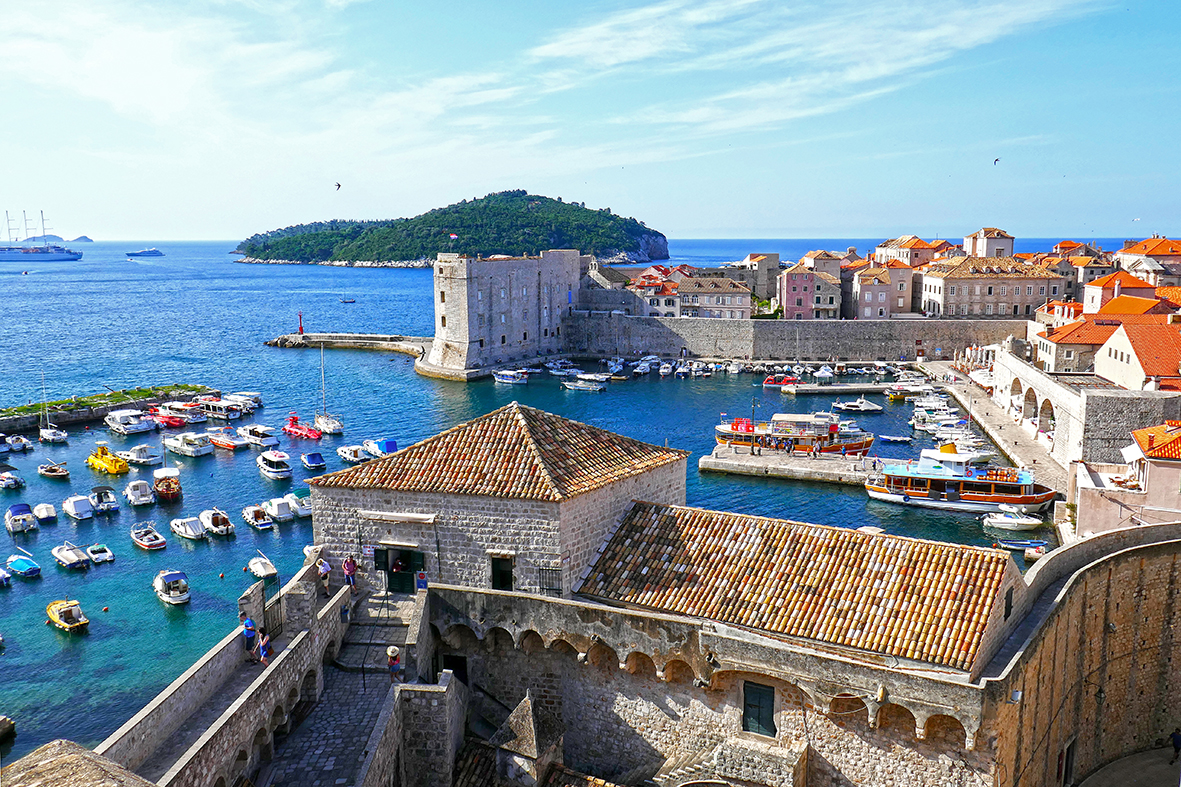 The old port of Dubrovnik

After walking the walls, a good place to relax is on the city beach, Banje. Just a short walk from Ploce Gate – it does get crowded but the waters are crystal clear so it’s a good place to cool off.

Later, we explored the magnificent architecture, visiting the Cathedral and admiring Orlando’s column which stands in the square. You can also take a boat trip and visit some of the islands close by or book a sunset cruise. There are numerous options on sale from kiosks at the Old Port.

Alternatively, if you want to be more adventurous you can plan your own itinerary. This is simply done by catching a local bus just outside Pile Gate to the new port of Gruz. Island hopping is very easy whether you just want to spend a day somewhere quiet or a night or two exploring one of the 1,200 islands along Croatia’s 2,000 kilometres of coast. A network of catamarans, ferries and car ferries, which also take foot passengers, travel between islands, a lifeline for communities also carrying goods and locals.

Closest to Dubrovnik are the Elafitis, the name comes from the Greek word elafos meaning deer, as in ancient times the islands were home to a large deer population. A small archipelago of six islands, the three main ones to visit or stay on are Kolocep, Lopud and Sipan – combined they have a population of less than a 1,000 people. 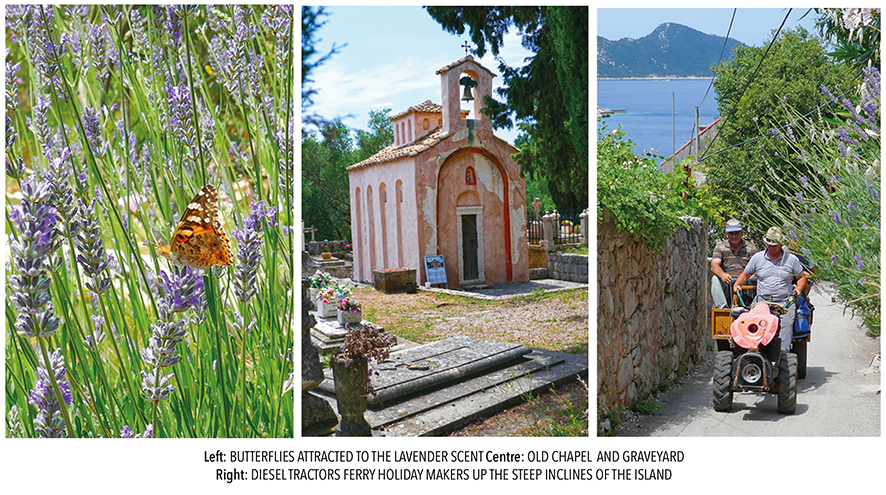 Kolocep and Lopud are car free, both equally great places to escape from the hustle and bustle of touristy city streets, we visited them consecutively on a day trip. The smallest island Kolocep is just a 20-minute ferry ride from the port of Dubrovnik in Gruz.

Kolocep is an island where fishing is an integral part of daily life; lobster is caught off shore and locals can be seen fishing from the pier. Its natural beauty of green forests, vineyards, olive groves and citrus trees entice you to wander across the island’s paths. As diesel tractors chug up the incline transporting supplies and people further into the interior. We walked past charming small stone houses with beautiful gardens of abundant flowers, deep pink holly hocks, towering over pompoms of orange flowers as bright as the midday heat as we breathed in air sweetly scented by opulent bushes of lavender encircled with butterflies.

Beside the paths, stalls with honesty boxes were laid out with bottles of olive oil, packages of dried orange peel, jars of fig jams and delicious tasting marmalades. Continuing along walled lanes we explored old chapels surrounded by ancient gravestones. Before long the lure of shimmering waters drew us back to the sandy beach for a swim. 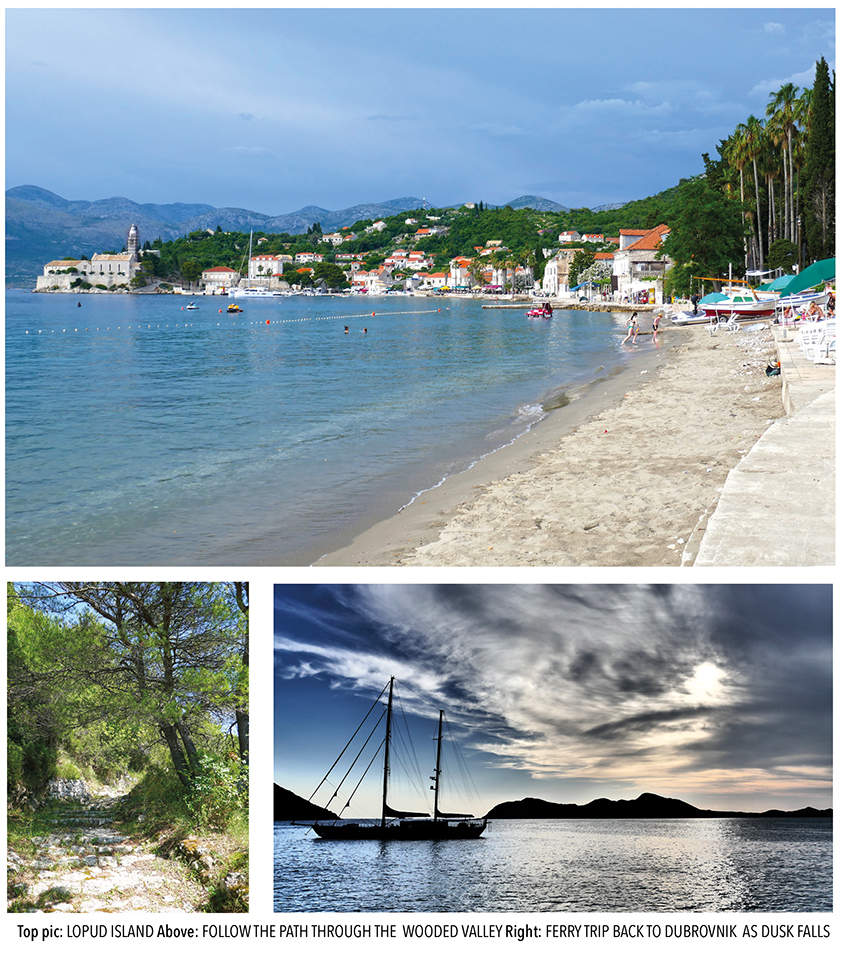 It was hard to drag ourselves away, but we wanted to see Lopud just a further 20-minute sail away. As we approached, the white stone quay dazzled in the afternoon sunshine; along the length of the harbour wall a line of bobbing fishing boats were tethered. Traditional shops and restaurants edged the town’s small beach. We followed the signs to Sunj beach on the other side of the island. There is a tarmac road where you can catch a taxi which is actually a golf cart, or as we did, walk along a path that leads uphill then down through a wooded valley – a cooler option. With fine golden sand which your toes sink into (which can be rare as a lot of Croatian beaches are comprised of stones and pebbles) and lapped by the warm waters of the Adriatic, making Sunj one of the best beaches in the Elafiti Islands. After a relaxing afternoon we strolled back to the port in time for the last boat back to Dubrovnik just under an hour away.

Flight: www.tui.co.uk from Bristol to Dubrovnik