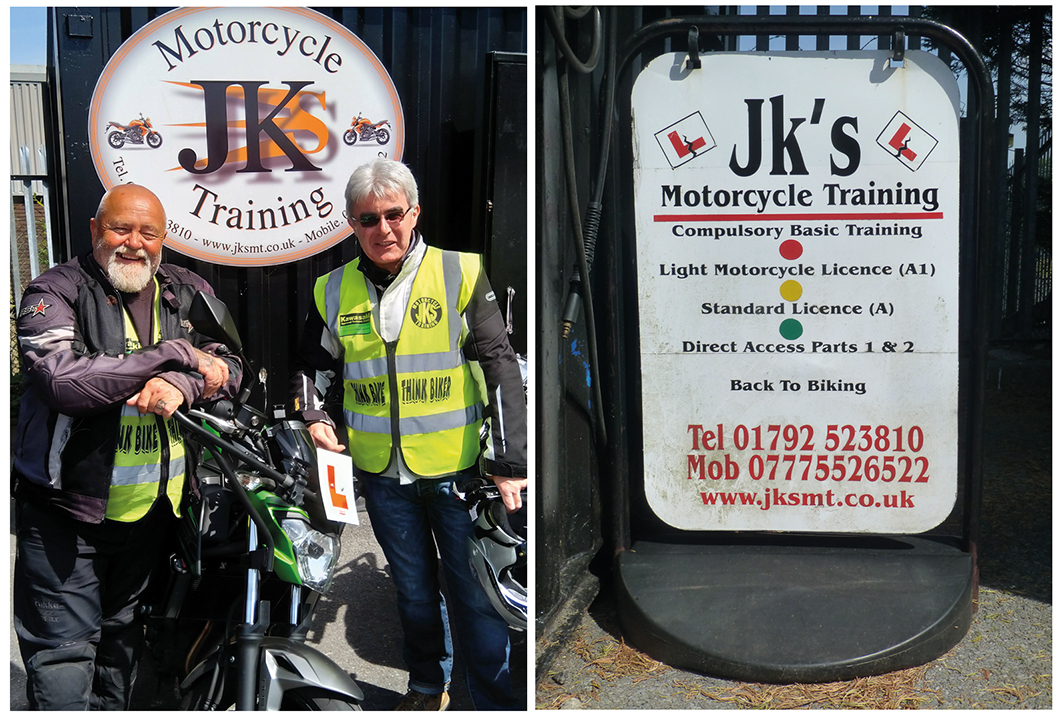 Funny, I don’t remember my jacket ever feeling as tight as this, my gloves seem to have shrunk a little too. Even my helmet feels a slightly snugger fit. All of these thoughts and more are running through my now significantly more protected head as I stand in the car park at M & P Motorcycles on Swansea’s Garngoch Industrial Estate. Things have clearly changed since I last rode a motorcycle.

In fact, the last time I rode one was for this very magazine; regular readers may recall me reviewing Triumph’s very stylish Scrambler – that was in 2016. It rained almost incessantly during the fortnight it was with me and, truth be told, fair weather biker that I am (or I was), I barely did 60 miles on it. Apart from sitting on the odd bike at events such as Good-wood’s Festival of Speed – where more often than not they’re bolted to the floor – and wheeling my brother Sean’s restoration project Honda CB125 out of the garage and into his van recently, ahead of its MOT, I’ve not touched a two-wheeler in nearly three years.

Now, before me, stands the new Kawasaki Z650. Apparently, it’s got 6 gears and 67bhp. I’ve driven hatchbacks with less.

I’m nervous enough as it is without the added pressure having to wrestle yet another recalcitrant Velcro fastener into place. Bay owners Lesley and Simon have just shown up too, they’re taking pictures. No pressure then… I need a refresher.

Luckily help is at hand. And fortunately, it’s very much biker-shaped.

Jeff Kelly runs JK Motorcycle training from his unit in the corner of M&P’s car park, it’s his Kawasaki I’m about to ride. I’m here, on a very sunny Monday morning, to take his Back to Biking course, a day’s tuition and guidance aimed at people like me -those of us no-doubt of a certain age, who passed our test more years ago than we can remember, and who haven’t ridden in a while. The aim is simple: To get us back on a bike and riding on the road in as safe a way as possible.

Fortunately for all-concerned it’s not the road we hit first: it’s the Arthur Llewellyn Jenkins car park around the corner. After establishing what I can and can’t remember and asking me if I’d prefer to start the day on a 125cc – “Honestly Liam, the 650’s smoother. You’ll like it. Let’s try it first, eh?” – the very patient and easy-going Jeff gives me a pillion ride to get there.

A motorcycle’s clutch is operated with your left hand, so after selecting first gear with your left foot – do try and keep up at the back – it’s a case of slowly releasing your grip of the clutch lever until you find the biting point: the point at which the engine note drops and the ‘bike just begins to move. Once found, pull the clutch lever back in. Repeat as necessary.

Jeff’s plan is simple: it’s for me to re-develop a feel for all the controls, and this is probably the most important part. Once I’ve got it, it’s a case of letting the clutch out just a smidgen further, and whilst straddling the Z650, walking it very gently up the car park, stopping, and then doing it again. And again. By doing so not only is Jeff teaching me clutch control, he’s also getting me used to the weight of the bike. It’s all simple stuff, but it’s also very, very clever. “You should do this every time you try a new bike” Says Jeff.

Next up is braking. But not just yet. Once I’m happy that the Z650 isn’t about shoot me across the car park like Evel Knievel, Jeff gets me to add what he calls a little noise. That’s his way of saying apply a little more throttle – with my right hand – and use my relearned clutch control skills to let the ‘bike run a few metres down the car park. “Just pick your feet up, don’t put them on the foot-pegs. As soon as you’re moving, shut the noise off, and then pull the clutch in – left hand remember – don’t touch anything else. Let’s see how far you go”.

The softly spoken Jeff has of course done this before, no doubt thousands of times. I soon realise he’s teaching me about momentum; I have to make a right turn before I stop. “And again” comes the next instruction. Before I know it I’m back where I started. It turns out he’s teaching me about balance, and steering skills too.

After a few gentle but albeit wobbly circuits, Jeff then brings out the cones. Fortunately, unlike when I learnt to ride initially, there’s no need to slalom between them. Instead Jeff places them on the floor in a box formation before asking me to ride up the car park, feet on the pegs this time, turn around at the top, and ride back towards him before stopping in the box.

Let’s see now. Back brake equals right foot; front brake equals right hand – which also controls the noise and thus the speed; left foot is gears – first is a push down on the lever, then second via neutral and thereafter up to sixth are all a push up. Last but-by-no-means-least is the back brake, that’s operated by my right foot. I remember all of that from previous riding, getting it all in the right order though…  It’s like trying to play the drums whilst riding a skateboard.

My first attempt isn’t great, my timing’s all over the place. I am playing all the right drums, but not necessarily in the right order. It also quickly dawns on me that had I have just jumped on a motorcycle and attempted to ride off on it, I’d have been a danger not only to myself but to all of those around me. I overshoot the braking-point by at least five feet. Just imagine if that had been a T-Junction or zebra-crossing.

Second time around, I stop too early: now I’m over-compensating. And by grabbing the front brake I discover just how effective it is. “Gentle inputs Liam” Says Jeff with a laugh “That’s been designed to stop you from over 120mph. You’re doing about 12!”

I go around again, trying to be gentle. I miss second gear. Urrgh!

“Right” says Jeff “I think we’ve reached the stage where we’ve exhausted the car-park. Let’s go back over the road shall we? And have a chat”.

Over coffee in Finks Diner (It’s next to M & P’s Harley Davidson, Can–Am, KTM, Kawasaki and Piaggio dealership) Jeff produces a small white-board before drawing ever more complicated road layouts on it whilst simultaneously questioning me about various riding scenarios. He asks me things such as… where I think I should position myself for left and right-hand bends, and why, where I’d indicate at certain junctions, what certain road signs mean, what the speed limits are on different types of road, and most importantly, where and what type of observation I think I should use. Observation I know, on a ‘bike, is all important. Observation. Signal. Positon. Speed. Look.

“Got it? Good. Remember it; say it to yourself as you approach things. Keep checking your mirrors. And remember to cancel your indicators after any manoeuvre – they’re not automatic on a ‘bike say’s Jeff finishing his Americano. “Any questions? Right! Now let’s have a little tootle around Gower”

Refreshed, re-educated on roadcraft, and radioed-up, it’s time to leave the confines of the car park. As I follow Jeff through Gorseinion and Gowerton and on towards Crofty, his voice comes through the earpiece like that of a South-Walian Obi-Wan Kenobi “Use the clutch, Liam. Are you sure that’s the gear you were looking for?” His hand signals too, offer further reassurance. It doesn’t take long either to realise that some of those road layouts he drew on that white-board of his are ones he knows all too well. That double mini-roundabout…

Guiding me around Gower he’s clearly in his element, and as we pass through Reynoldston and Nicholaston not only is he still offering invaluable guidance “See how the top of that wall leans in – be careful there’s no high-siders coming the other way, they’ll be forced out into the middle of the road”.

He also turns tour-guide, pointing out landmarks I didn’t even know where there.

Fortunately, the radio only works one way – not that I’ve any complaints that is. But as the afternoon goes on I too, albeit slowly, begin to find my flow again; my grip on the handlebars loosens to the point where I’m no longer getting pins and needles in my little fingers, and I begin singing (badly) to myself in my helmet. Sunshine, scented country air, and some dodgy old lyrics. It all adds up to a thoroughly enjoyable afternoon’s ride.

All too soon I find myself back in the car-park, the day’s session sadly over. Were it not for Jeff’s Back to Biking course I’d still be apprehensive about getting on a ‘bike again, and I’d probably still be making excuses about things like the weather or the wrong kind of kit. Whereas now, if Jeff were to offer me another hour or two on his Z650 I’d jump at the chance. I thank Jeff for all of his help and patience, but it’s probably the smile on my face that says the most.

Before I get back in my car and begin heading home, I can’t resist crossing the road and taking a look around M&P’s BMW Motorrad division. I’ve always liked BMW motorcycles: they’re the reason I took my test in the first place (too many Neil Peart books perhaps?) There’s some beautiful stuff in there, some all-too tempting finance deals too.

“Funny you should ask…” 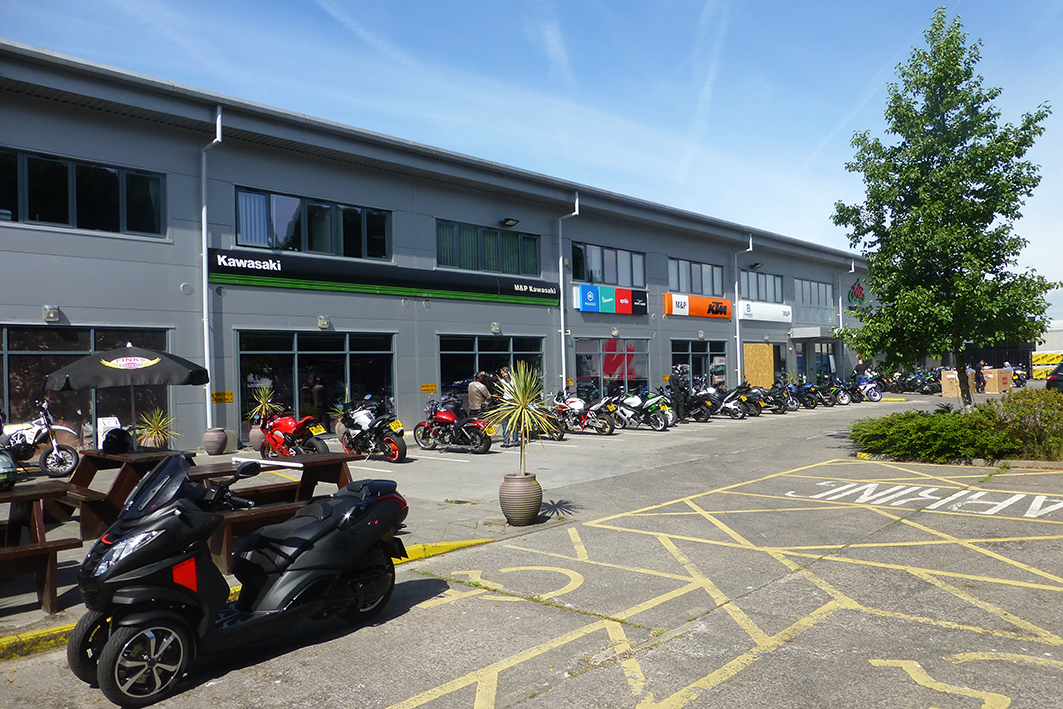 Time to go, I think.

If today has taught me anything it’s that I’ll never be TT racer material. I’m unlikely to embark on a two-wheeled cross-continental odyssey anytime soon either. Nevertheless, something tells me it might not be too long before I journey back to the Garngoch Industrial Estate again.

If you’re interested in learning to ride a motorcycle, or you’re keen to get back to biking, you can contact Jeff Kelly by the following means:

He’s on Facebook too. Or, like I did, you can find him in the corner of M&P Motorcycles, Garngoch Industrial Estate, Phoenix Way, Penllergaer, Swansea SA4 9HN.