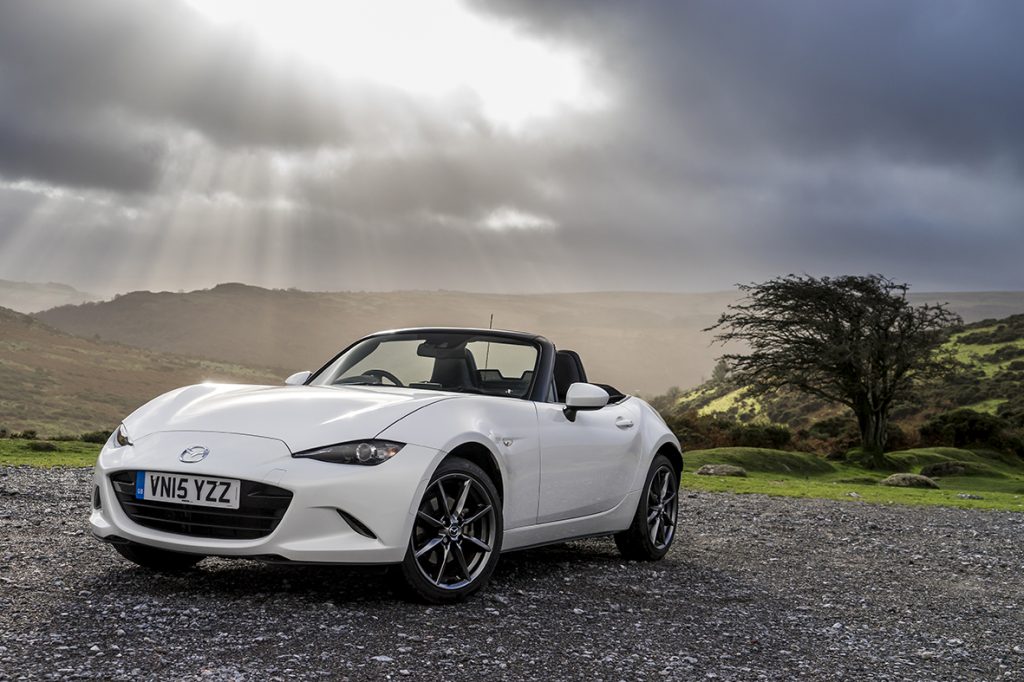 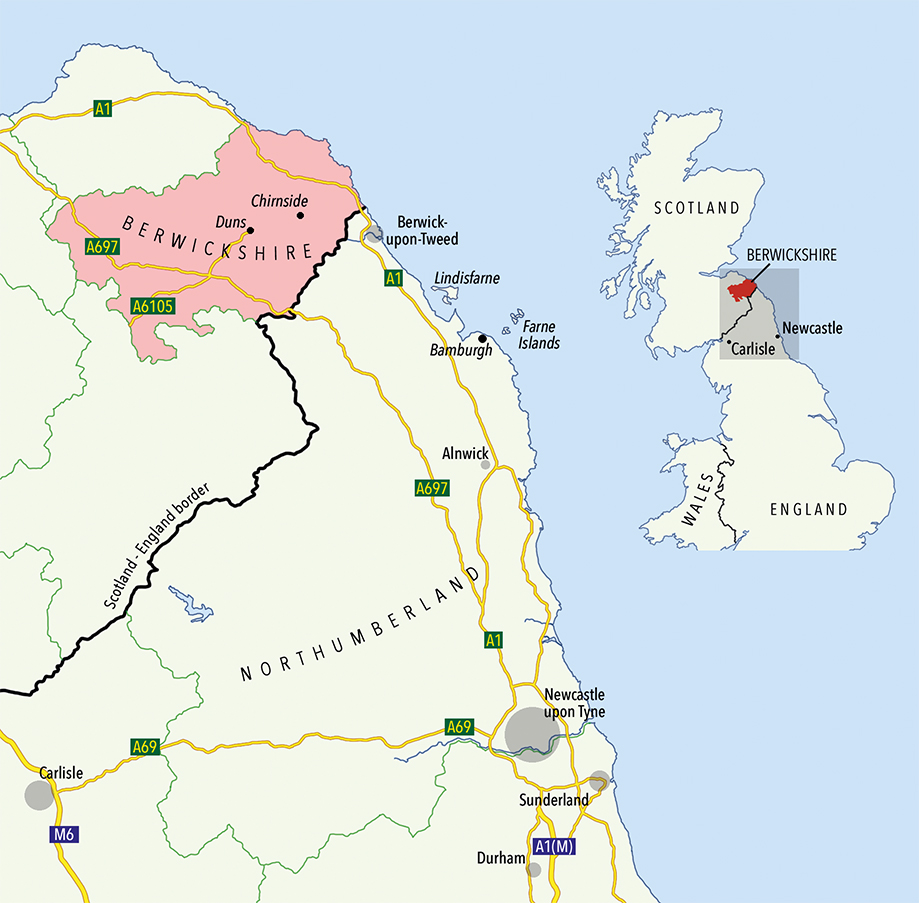 It’s unlikely that you’ll have heard of either Edington Mains, Charterhall or Chirnside, but you may perhaps have heard of the small border town that is Duns. All are in Berwickshire, they lie within a few miles of each other, and they’re all connected by the kind of roads that someone, far more an eloquent travel writer than I, once described as “the type you’d only ever drive on if you lived there”.

There is another connection, apart that is from the somewhat empty feeling (at least on a drizzly Saturday afternoon) A6105. A shy and famously indecisive farmer’s son lived here before he became Formula 1 world champion, twice. He was also a multiple saloon car championship winner, a rally driver, a very successful racer of sports cars, and an Indy 500 hundred victor. His name: James Clark Junior, better known as Jim Clark. Need I say more? 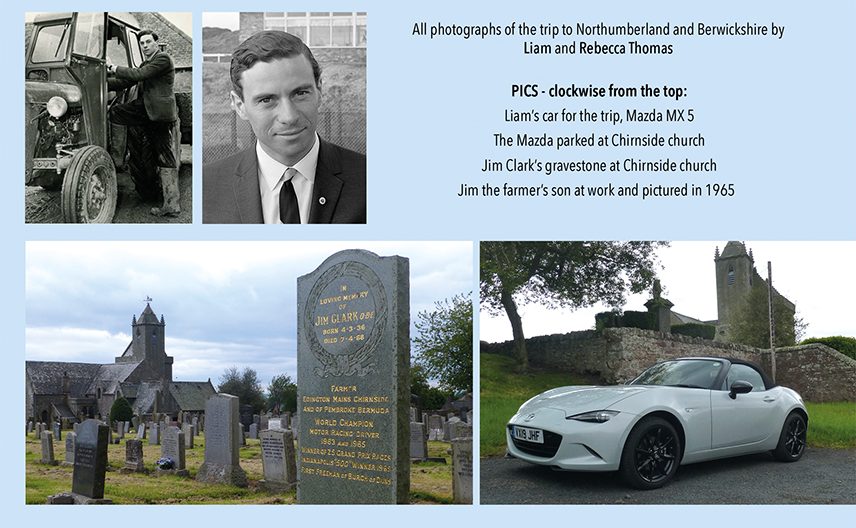 Jim Clark died on a rainy April 7th at the Hockenheimring, Germany, in 1968. He was competing in a Formula 2 race that arguably he shouldn’t even have been in. Some say it was a puncture that claimed him, others a mechanical issue, possibly suspension failure. Lotus racing cars of that particular period were built to be light and were thus notoriously fragile. No-one has ever really been 100% sure what caused the accident. What is certain though is that it couldn’t have been driver error, not Jim. He’s buried in the church yard at Chirnside.

Personally, I’ve never really been one for farm-land; having grown-up in Shropshire I’m of the opinion I’ve seen enough of it to last a lifetime. Also, Clark was killed 5 years before I was even thought of. Nevertheless, such is his legacy I’ve wanted to visit this quiet and unassuming part of southern Scotland for almost as long as I can remember, to pay my respects to the man that racing drivers still, even today, refer to as the best of the best. 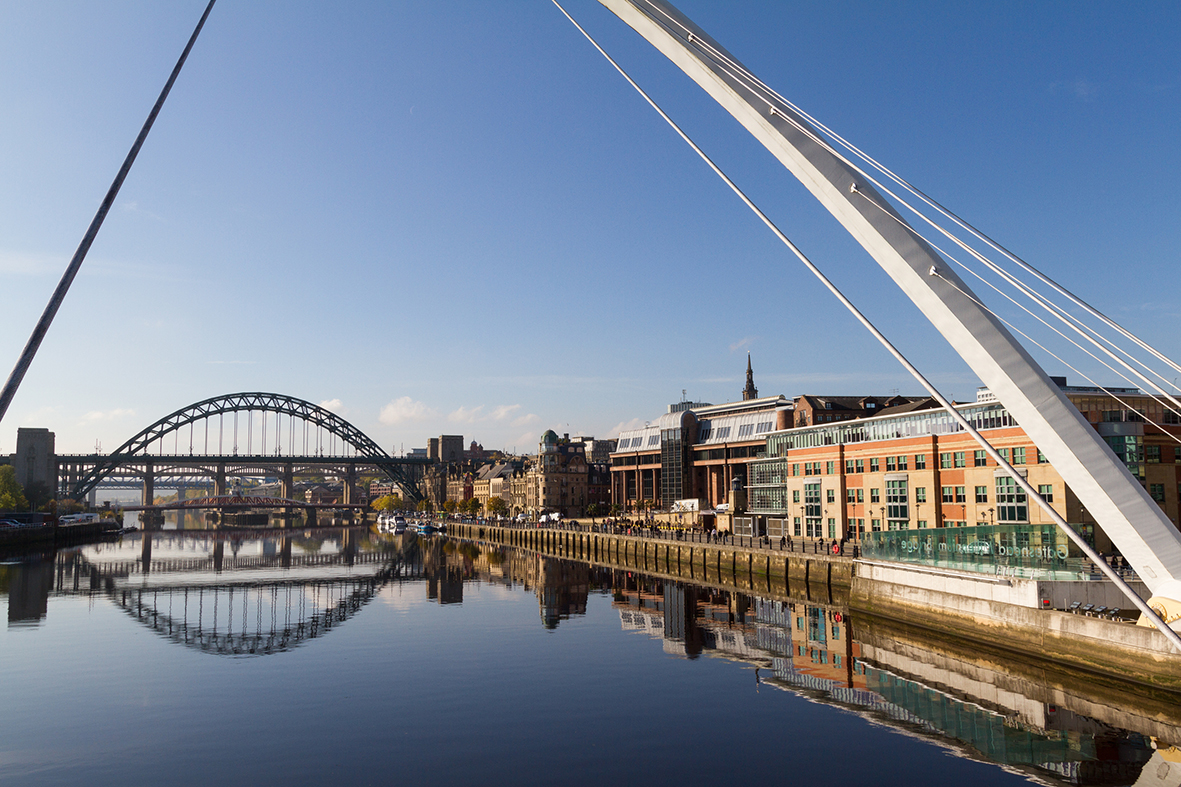 Google Maps suggests that the direct route from my place to Chirnside is a 290-mile trip. I thought it best if we split that up. My plan was to travel up to Newcastle upon Tyne via the M6 to Carlisle, before joining the A69 headed due east, effectively following Hadrian’s Wall. After a gentle night “on the Toon” the plan was to head north again, following the stunning Northumbrian coastline via Alnwick and Bamburgh, before turning west again, just north of Berwick on Tweed.

With the route planned the only other question that needed answering was: What car should we take?

Something sporty of course. But also, something that would also be capable of multiple motorway miles, with a boot big enough to swallow a couple of generously packed weekend-away bags, and a not too expensive thirst for unleaded. Something with a hint of the 1960s too if possible.

Ideally, I was after something that Jim Clark might have approved of, and if such things were still possible, recognise. Well, at least in layout.

A modern-day Lotus was my first thought, but these days they’re all mid-engined and too far removed from the classic sports-car I had in mind. Previous experience told me they’re not great on luggage-space either. So, I called Mazda instead.

If ever there was a car that fits the classic roadster with modern-day usability and reliability remit perfectly, surely, it’s the MX-5. It’s an agile, two-seater convertible with its engine at the front and its drive to the rear. In 2.0 litre form its 4-cylinder twin-cam engine produces 184bhp, its playful handling is now near legendary, and thanks to its light weight and 6 speed gearbox there’s promise of over 40 mpg. Now in its 30th year of continued production it’s no wonder it’s the world’s best-selling two-seater convertible. 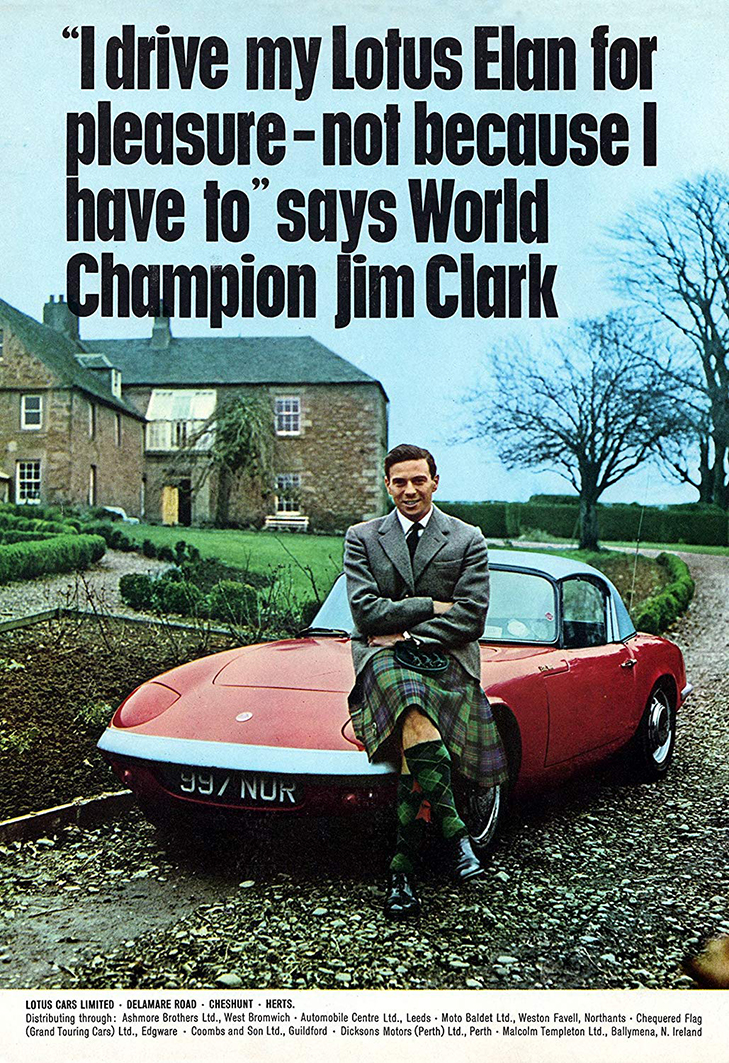 Also, it just so happens that when Mazda were designing the original MX-5 they took more than a little inspiration from the original Lotus Elite and Elan – both of which Jim Clark raced, and advertised.

There’s a famous Lotus advert (right) in which Clark in full highland dress sits on the front wing of his red Elan reg: 997 NUR, in the yard at his farm at Edington Mains. The tag-line reads: I drive my Lotus Elan for pleasure – not because I have to.

Needless to say, I asked for a red MX-5; Mazda sent a white one. Oh well… Jim Clark had a white Lotus Elite. He had a white Elan too. As a works Lotus driver, it turns out he had few of them.

Putting those very tenuous links aside – apart that is from the fact our northern excursion also coincided with both the weekend of this year’s Le Mans 24 hours and the 60th anniversary of Jim Clark competing in his first Le Mans (in an Elite), that we too planned driving purely for pleasure, and that at 5’7” tall Jim was the same height as me – we headed to Tyneside.

As suspected the MX-5 proved to be the perfect accompaniment to our pilgrimage. Its compact cabin is cosy and well insulated when the weather takes a turn for the worse; it’s comfy enough to cruise at motorway speeds for at least a couple of hours between pit-stops; and when the sun comes out, with just one simple clip, you can drop the roof in seconds. It also benefits from such luxuries as climate control, touch screen sat-nav, Bluetooth, DAB, cruise control, and multiple air-bags as standard. Plus, there’s heated seats – for the late evening open-top cruise around town of course! 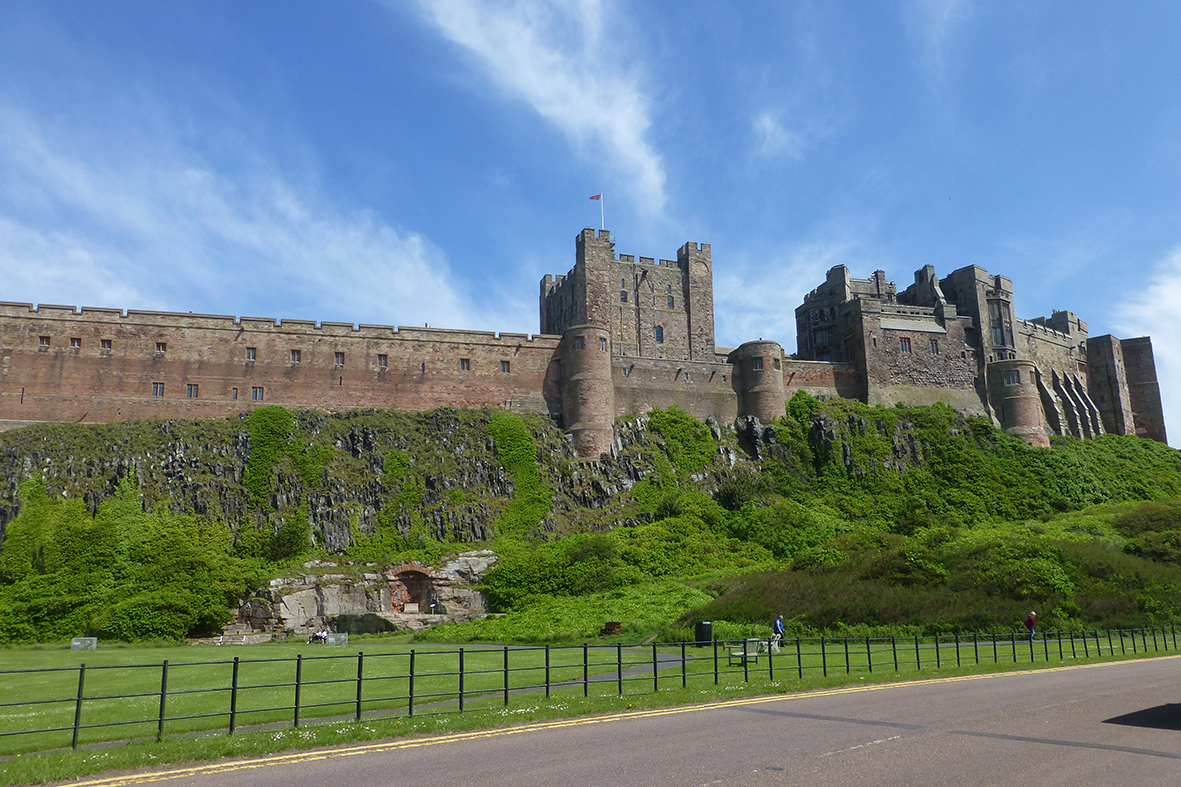 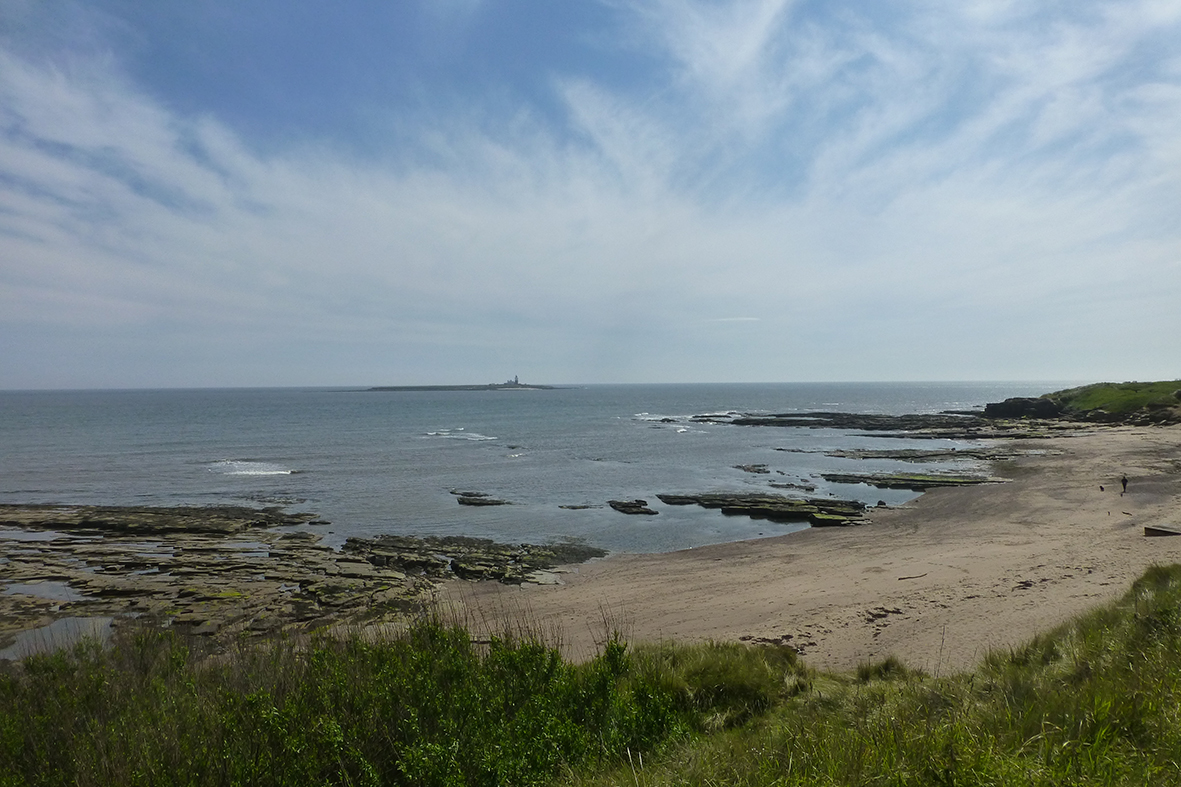 The view of Farne Islands from Bamburgh beach

After a good night’s sleep and hearty breakfast in Newcastle’s Hotel du Vin (recommended, very swish!) as planned we took the Northumberland coast road. The scenery, to put it simply: It’s stunning. If empty white sandy beaches and castles aplenty are your thing you should go. If only we’d had more time to explore, Holy Island and Lindisfarne Priory will have to wait for another day. 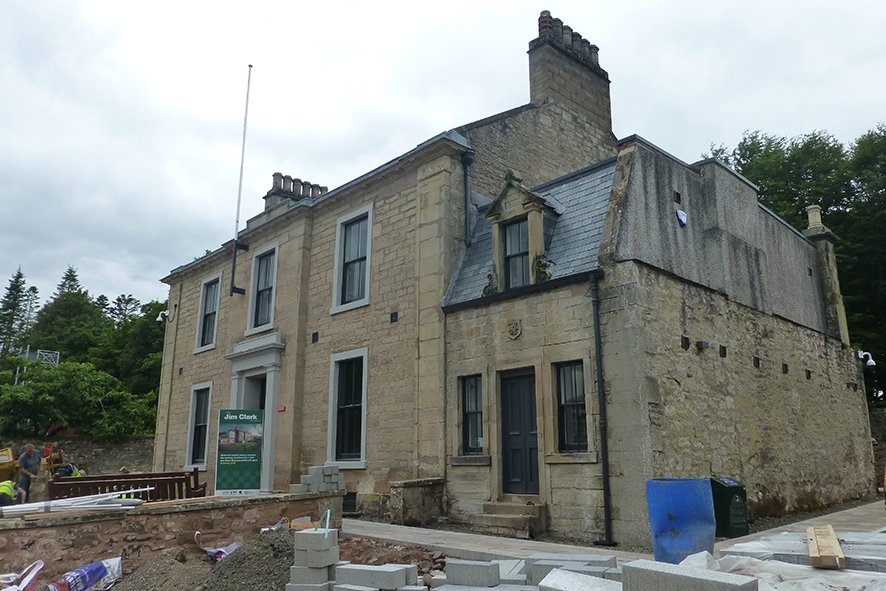 The Jim Clark Museum under construction

And so too, for us at least, will the Jim Clark rooms in Duns.

This little museum on the High Street is set to reopen on July 11th, after an extensive refurbishment funded purely by donations. It will play host to a number of cars raced by this little market town’s most famous son, as well as what promises to be a fine collection of his trophies and other personal effects.

Typical, after all that planning we still arrived 3 weeks too early. On the way back to Newcastle we missed the turning for Chaterhall airfield too, it’s where Jim Clark tried a racing car for the very first time.

We’ll be back. I might give Lotus a call…. 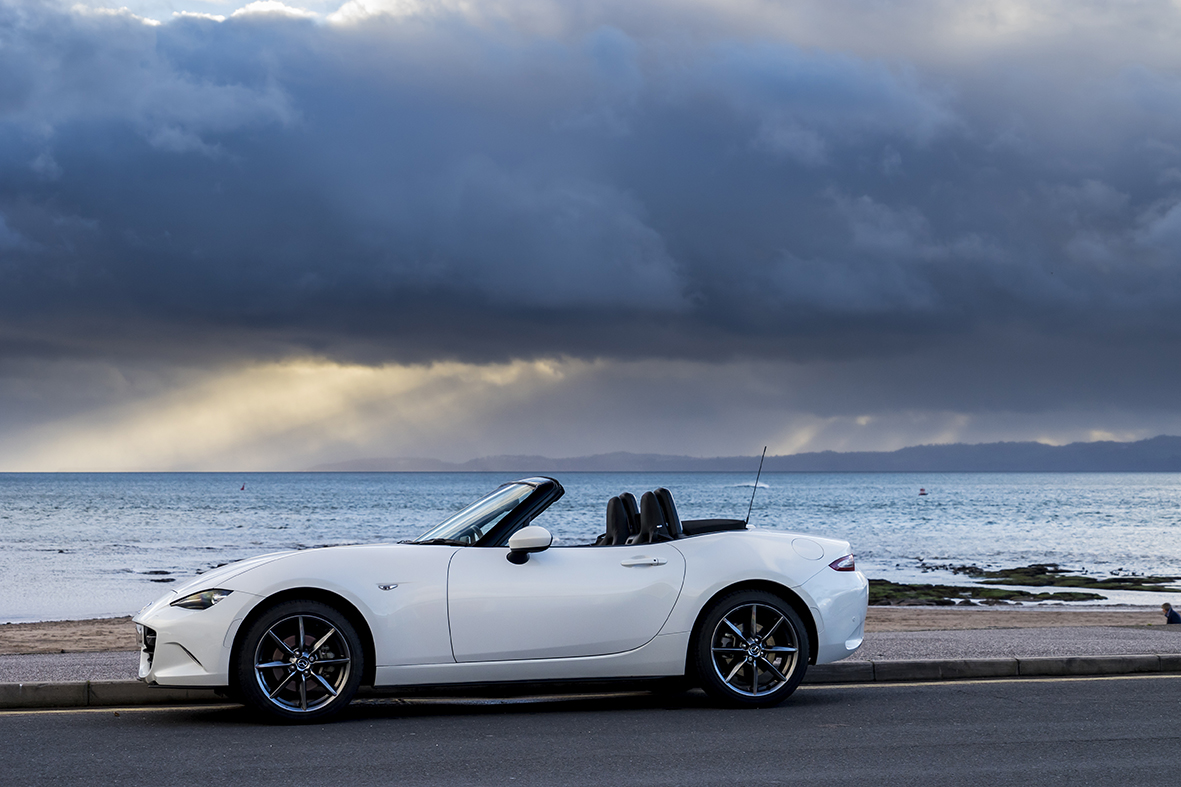