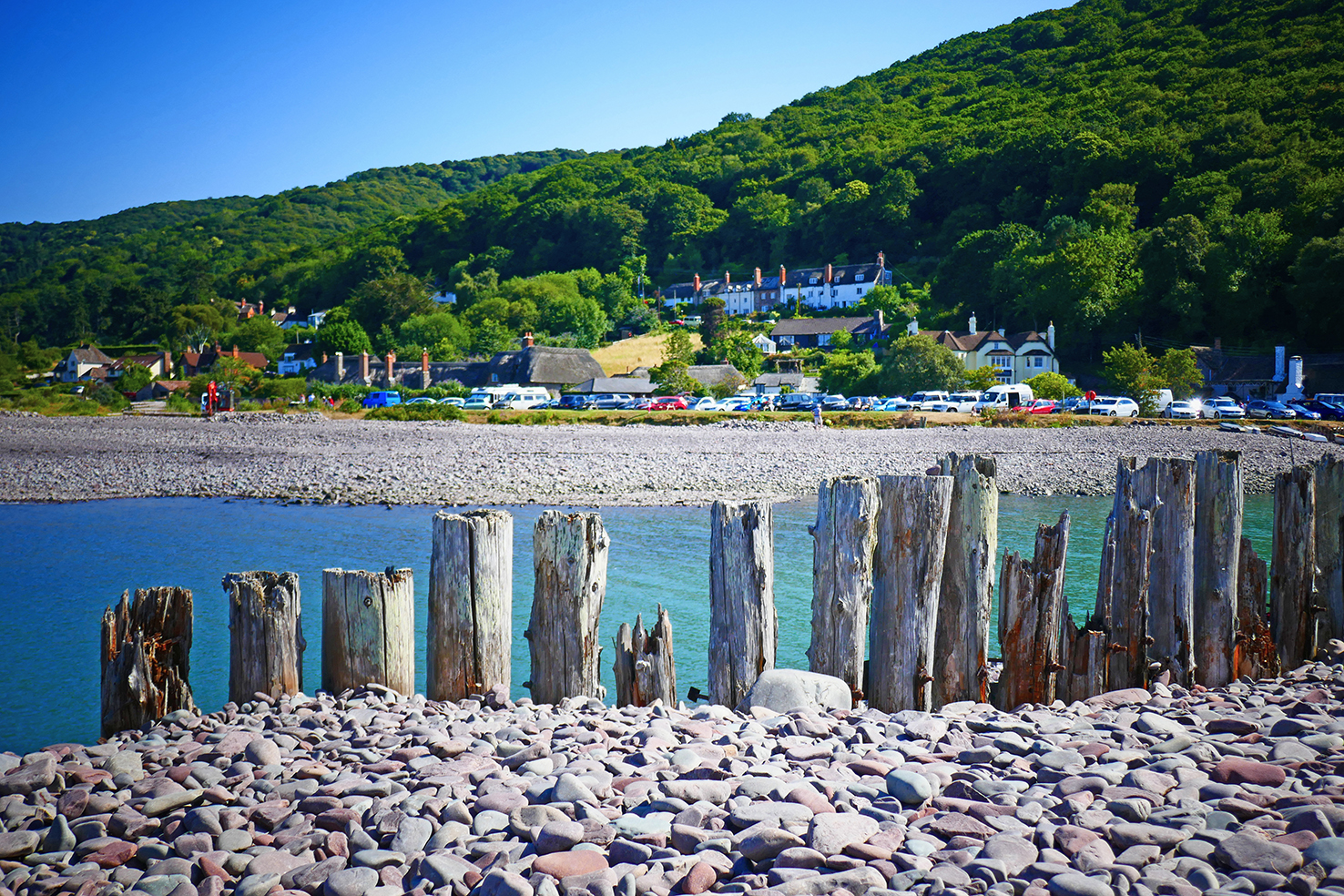 Porlock Weir with its cottages, some dating from the 16th century 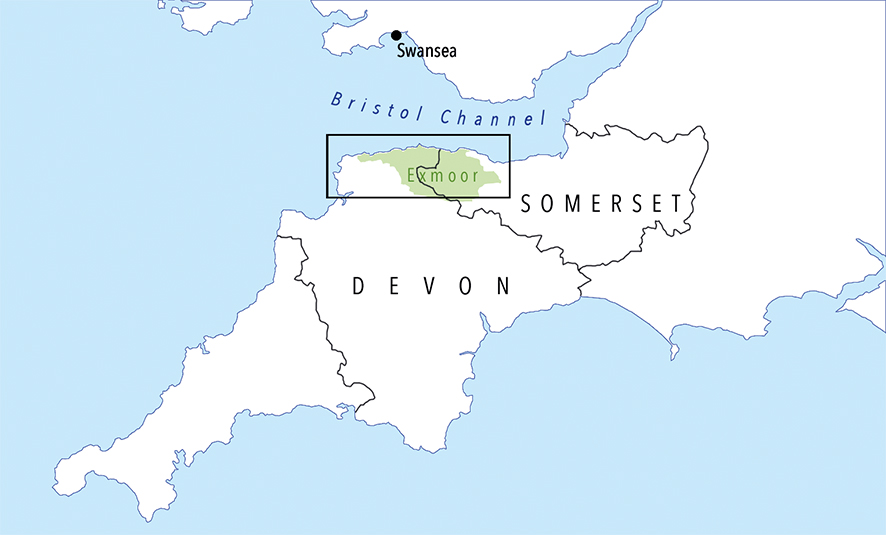 As you look out across Swansea Bay a coastal outline appears on the horizon. Merely 35 miles away as the crow flies, and oh how I wish that was possible instead of driving nearly 4 times the distance, though I have to say the journey is definitely worth it. I fell in love with the unspoilt rugged, wild shoreline, when I visited earlier this summer. 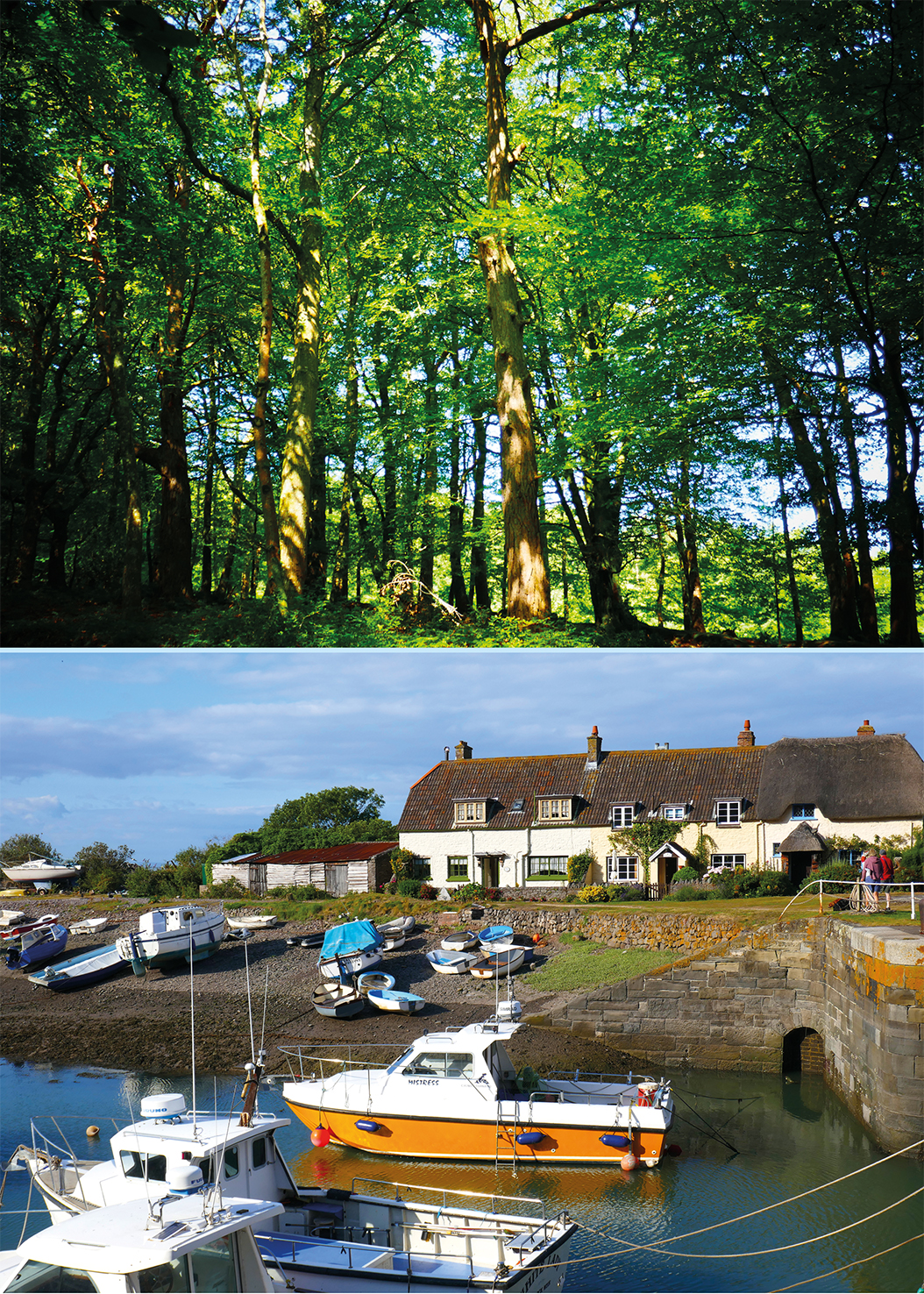 Top: West Somerset has some of the most extensive coastal forests in the UK Below: The tidal harbour of Porlock Weir

Separated by the Bristol Channel, Devon and Somerset in the South West of England are graced with spectacular coastlines and rock formations, along with shingle and sand beaches. Moorland and forests in hues of soft green, brushed with purple from the heather backdrop to some of the highest sea cliffs in England; along the edge of Exmoor the land rises steeply up to 1,000 feet in places.

A long weekend was just enough for me to get a feel for the area, camping near Porlock in West Somerset. Here, hillsides covered by ancient oak woodland fringe the site making it one of the most extensive coastal forests in the UK. For anyone that loves the outdoors, especially walking, it is ideal, as well signposted paths criss-cross crystal clear streams, past waterfalls and colourful fields of scented summer wildflowers.

About 1.5 miles from the inland village lies Porlock Weir, a quiet coastal settlement. Fishing boats and a small flotilla of yachts shelter in the secret harbour, with its row of thatched cottages. This is a sleepy hamlet, where I browsed local artists’ work, and had a drink by the water’s edge. 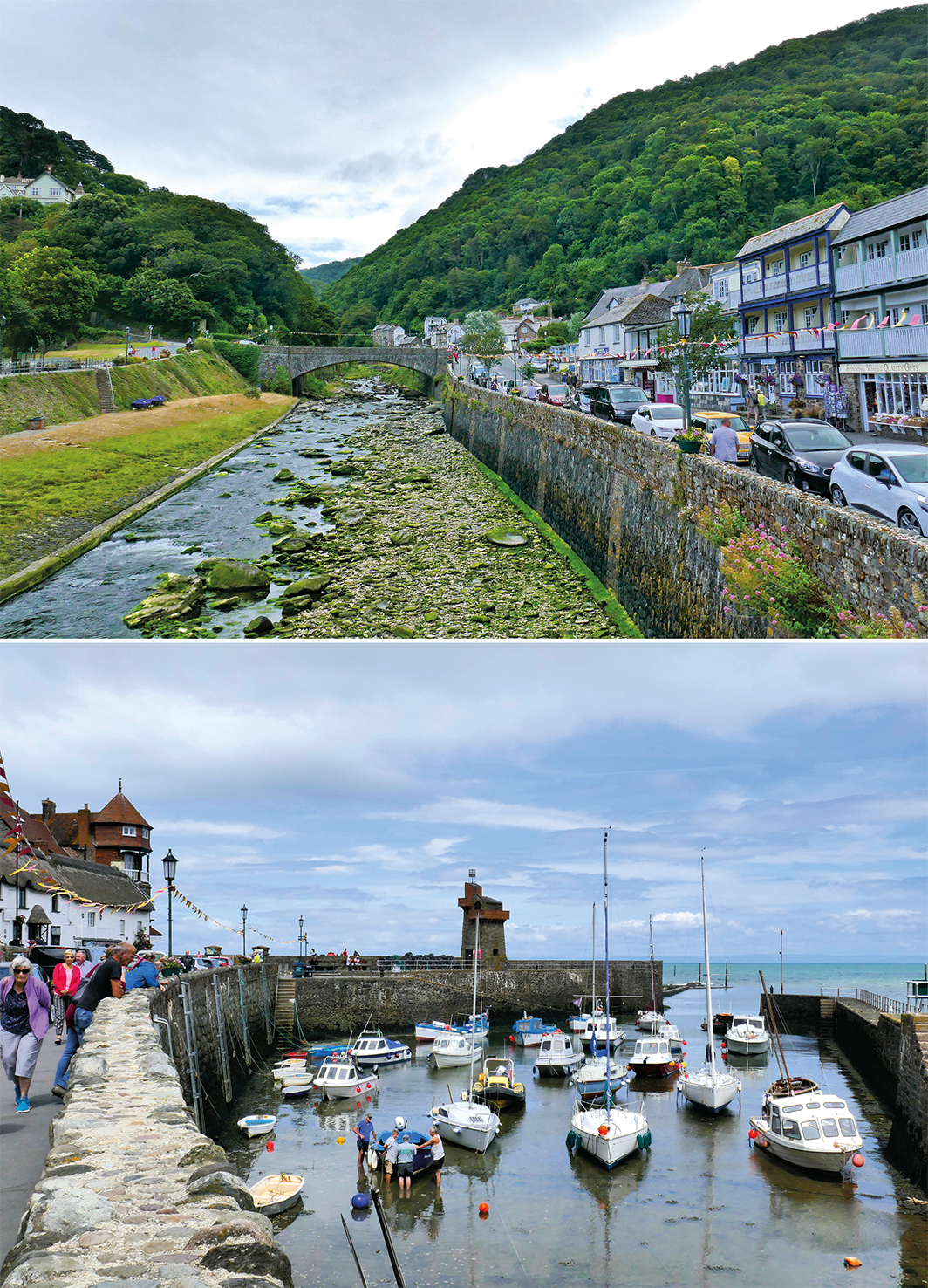 Top: It’s hard to imagine this river as a raging torrent Below: The sheltered quay at Lynmouth Harbour looking towards Harbour Point on the far left

Further along the coast are the twin villages of Lynton and Lynmouth which are connected by the steepest fully water-powered cliff railway in the country. 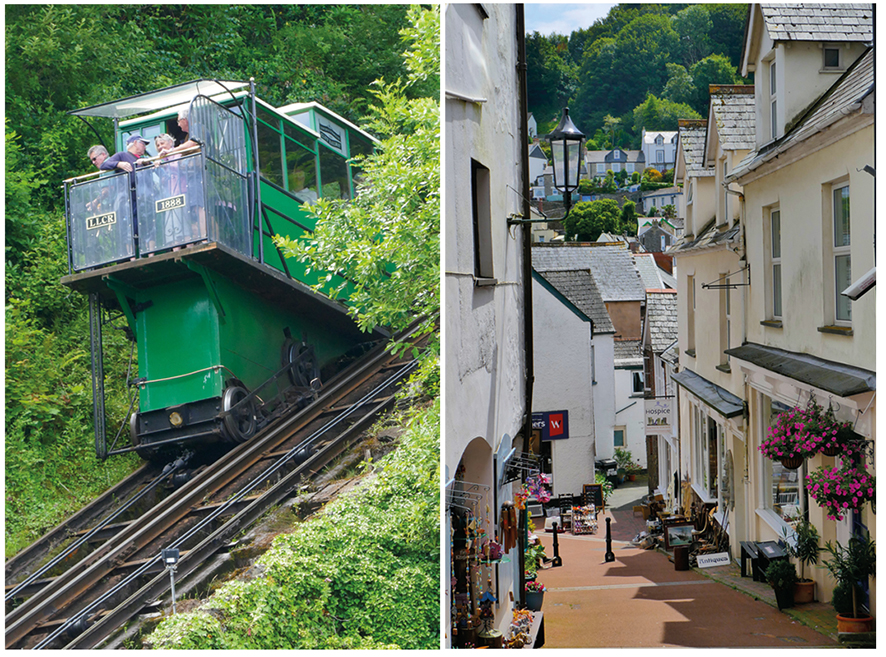 Left: Lynton and Lynmouth cliff railway was built in 1888, and is the UKs only fully water powered railway Right: The narrow lanes of Lynton

The unspoilt Victorian town of Lynton with its many tearooms has spectacular views of Lynmouth Bay. At the foot of the cliffs sits the pretty harbour town with its olde worlde fishing cottages, galleries and clotted cream fudge shops that line the narrow streets leading down to the quay.

As you walk along admiring the picturesque surroundings it is hard to believe that all the buildings have been reconstructed. A short distance inland, two rivers, the East Lyn and the Hoaroak merge at Watersmeet, flowing along a gorge then through the town 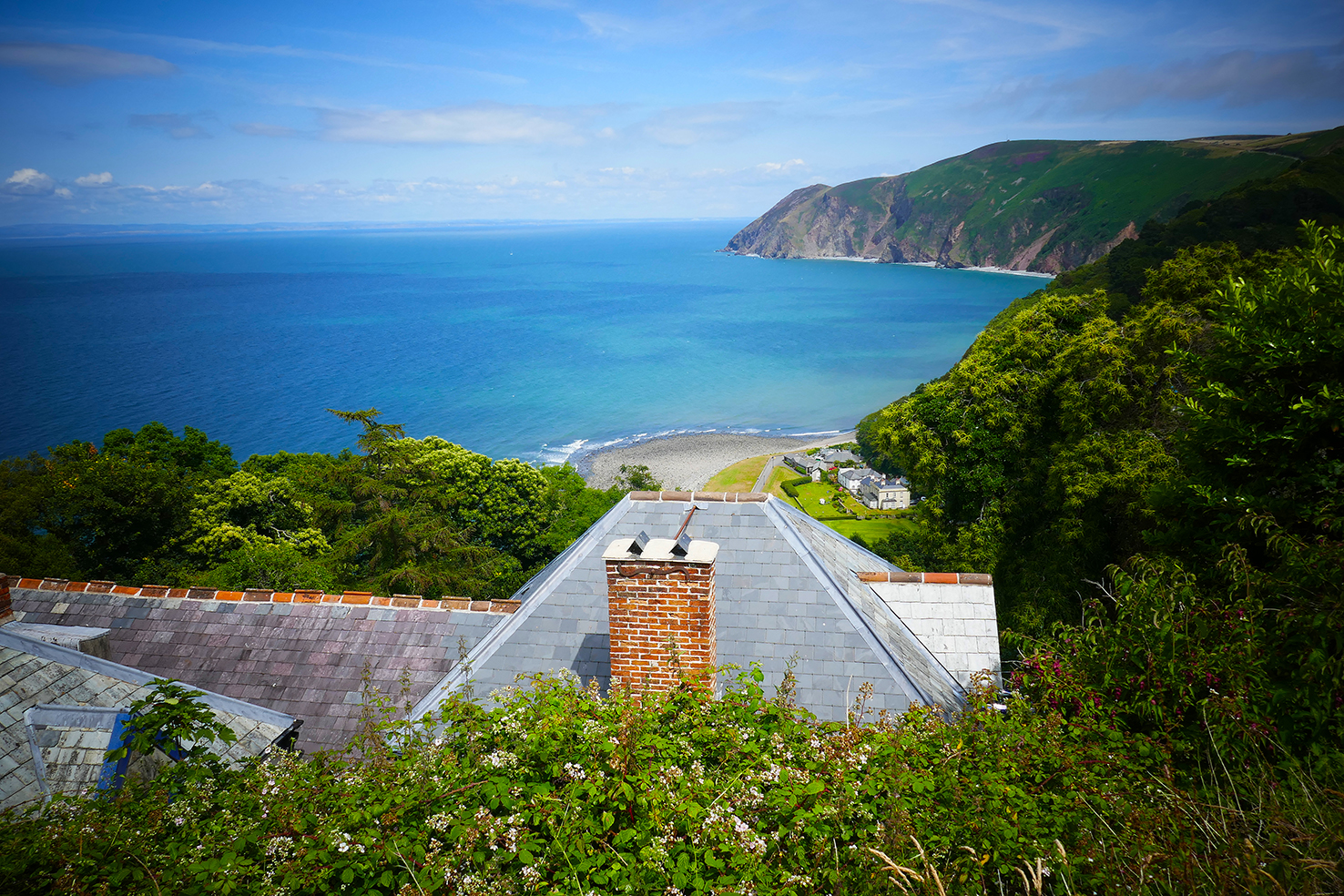 Lynmouth Bay viewed from the top of the cliff at Lynton, can you spot Swansea in the distance

and out to sea. On August 15th 1952 after days of torrential rainfall over Exmoor, a surge gathered trees and boulders, damming the river. This forced a torrent of water to burst through, sweeping away bridges, destroying homes and businesses but far more devastating was the loss of 34 lives.

A free exhibition housed at the Flood Memorial Hall is well worth a visit. Black and white film footage graphically captures the aftermath of the event, alongside personal accounts, photos, newspaper cuttings and a scale model of the town pre-flood. Be prepared to be moved by the stories and the sheer determination of the inhabitants to rebuild their community and lives after such a loss. 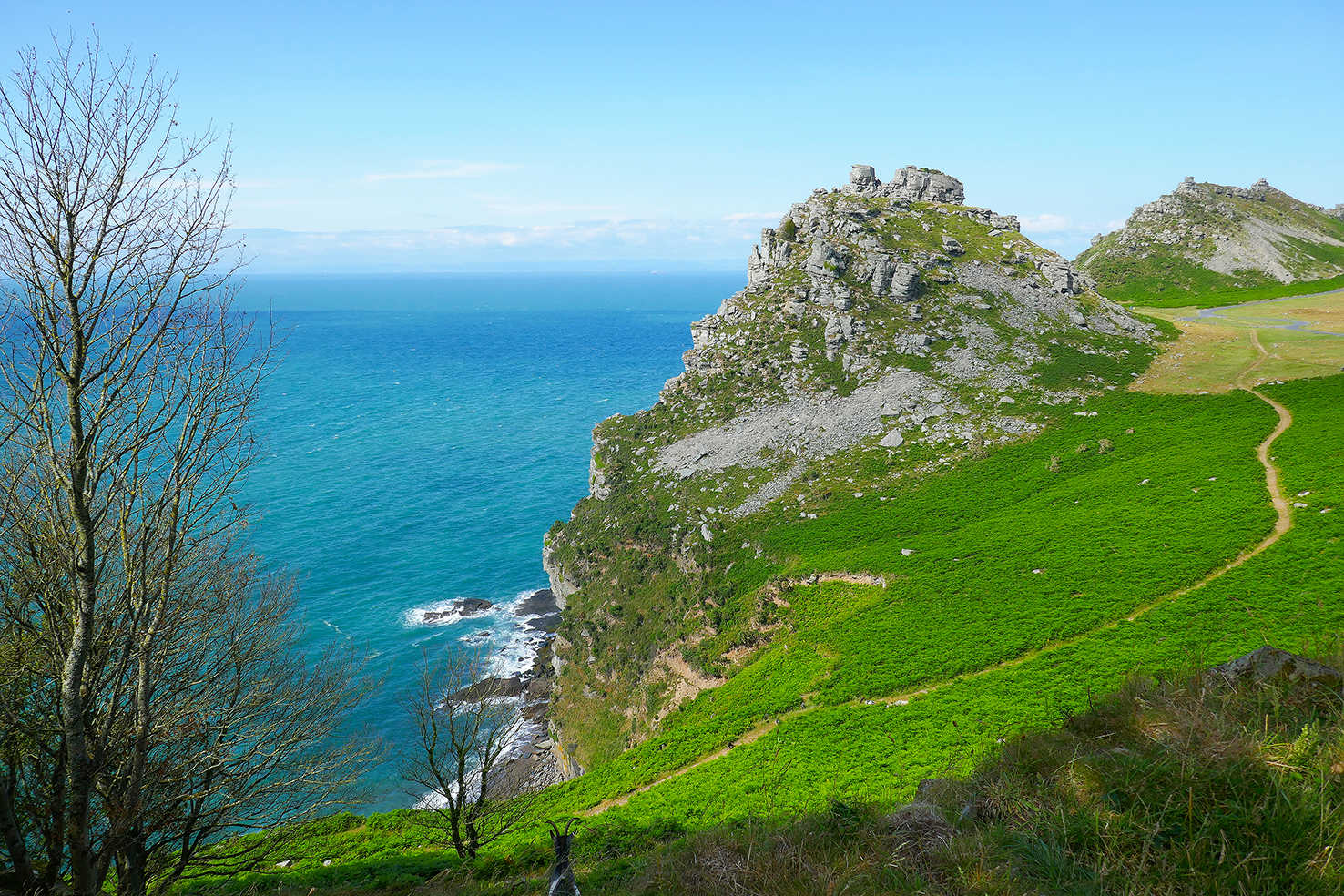 The dramatic Valley of the Rocks – look out for the goats

Half a mile west of Lynton the landscape changes and the Valley of the Rocks emerges, a dry valley created during the Ice Age that runs alongside the coast, offering dramatic views. A narrow ridge tops the blocky grey sea facing cliffs. Lower slopes are covered by grass, ferns gorse and with the arrival of spring a carpet of flowers. Stopping to take a photo I was nearly nudged off the path as a herd of wild goats came scrambling over the rocky outcrops, the valley’s local residents.

Left: The small rocky cove of Lee Bay Right: The tiny interior of Beach Chapel showing its alter. The chapel was carved into the cliff above Lee Bay

Following the road further will bring you past the Christian retreat of Lee Abbey, (a private estate still accessible to visitors by payment of a £2.00 toll per vehicle) meandering through woodland and down to Lee Bay, where rolling waves break across the pebble shore. Burrowed into the cliff face above, behind large old wooden doors is an unusual place of worship, a cool and dark, tiny beach chapel.

Travelling inland there are many picturesque villages and small hamlets to discover. Set within the foothills of the Exmoor National Park is the beautiful medieval village of Dunster, with its impressive castle dating back 1,000 years. Timber framed houses, the remains of a priory, Yarn Market and Iron Age settlements makes it a unique place to stay awhile and explore – or follow one of the walks leading into the surrounding hills.

Equally special is the National Trust village of Selworthy, hidden away in the landscape of the 12,000 acre Holnicote estate. Spiralling smoke rose into the still air from buttercup yellow painted thatched cottages overlooking the village green, while afternoon teas were served in gardens. This is a gem of a place tucked into a rural vale, so picturesque you just want to stay. 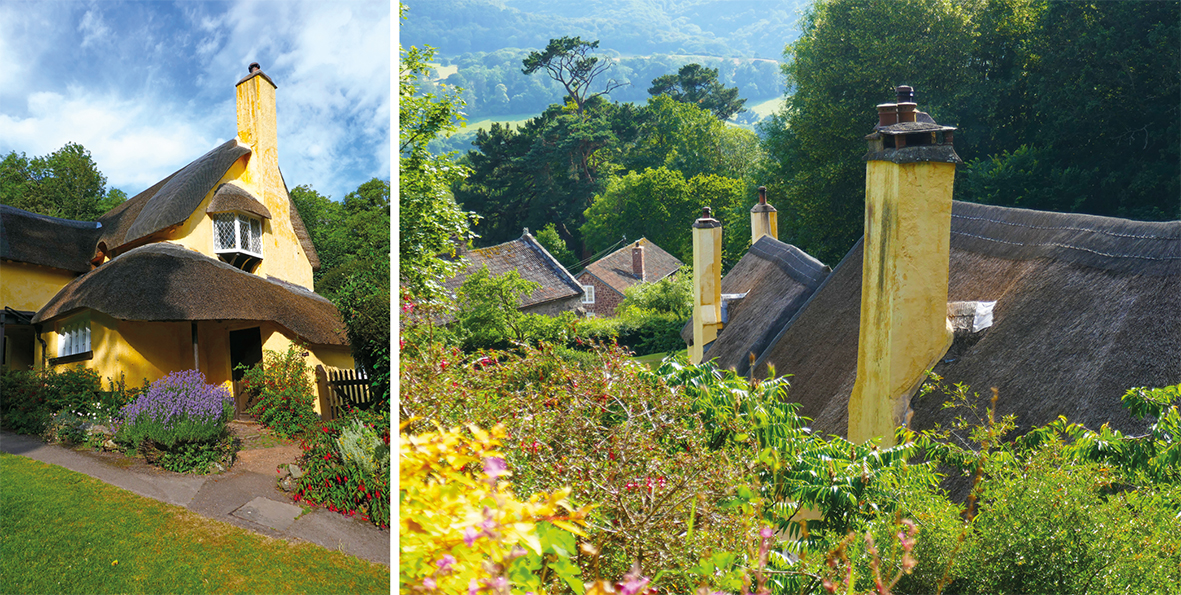 The buttercup yellow cottages on the Holnicote Estate

And you can for a night or two at least, as Ivy’s Cottage; a snug one-bedroom holiday-let is available to book through the National Trust. So, after the day visitors leave you can have a timeless chocolate box village to yourself.

Perched on the hillside is All Saints Church with its panoramic views over the Vale of Porlock. From here you can follow a path leading up through a wooded valley and look across to Dunkery Beacon, Exmoor’s highest point.

Crossing Exmoor looking across the Bristol Channel to South Wales

To see Exmoor ponies, one of Britain’s native breeds, freely roam in their natural habitat is a wonderful sight. Driving across the moors we came across a group of mothers (dams) with their foals, glossy brown summer coats glistening in the sunlight.

A few years ago, I sailed from Swansea to Lundy on the MV Balmoral, stopping off in Ilfracombe to let off passengers. I now had the opportunity to see Ilfracombe for myself, as it is just an hour’s drive from Porlock. It’s a sea-side town with many interesting galleries showcasing the work of local and international artists. In walking distance lies a small sheltered sandy beach running down to the harbour from where a small fleet of charter boats operate. 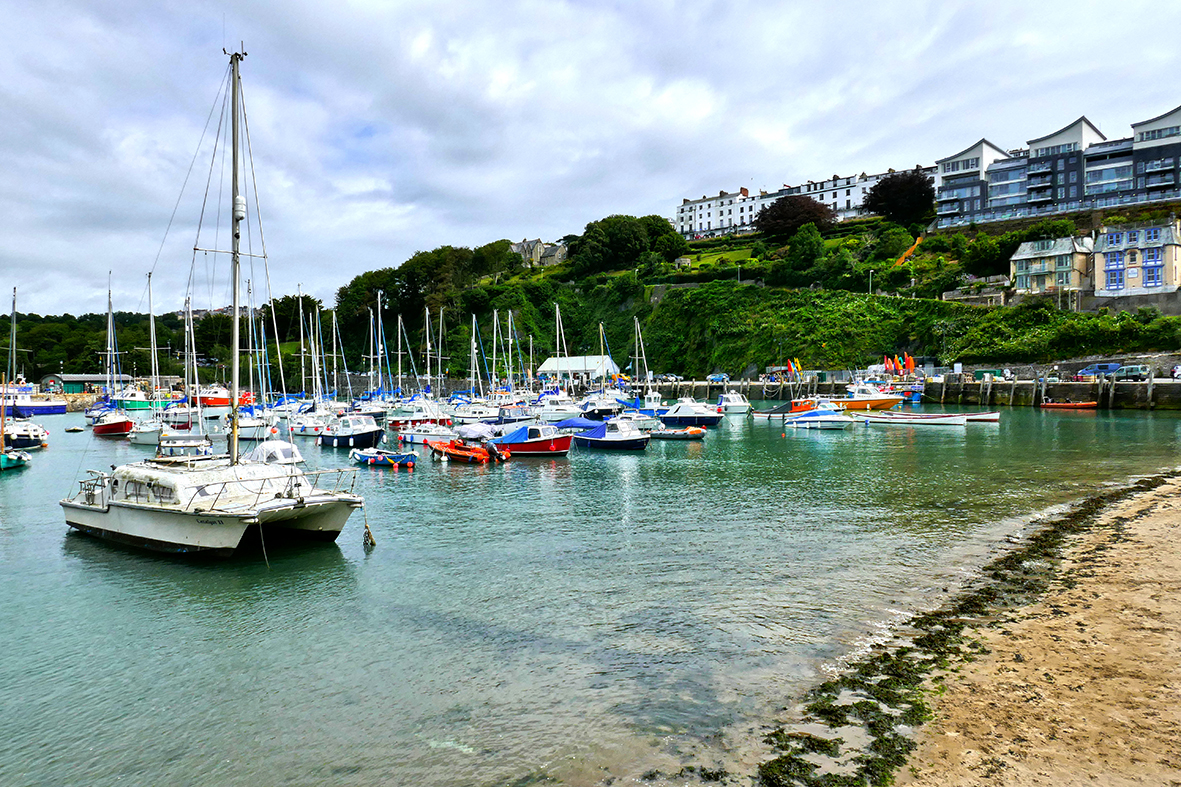 Sneaky seagull’s ever watchful and opportunistic perch along the walls of the quayside, waiting for the unsuspecting visitor to emerge from the chip, pasty and sweet shops linked like an edible daisy chain opposite.

Overlooking the harbour stands one of the town’s iconic landmarks St Nicholas Chapel, dating back to 1321. Built as a place of worship for the people who lived and worked around the harbour, it also maintains a light to guide shipping.

The town’s other iconic landmark is Verity, a stainless-steel and bronze statue created by Damien Hirst. At 20.25m (66ft) in height, the figure is a daunting sight, positioned at the harbour entrance. The artwork arrived in 2012 on a 20-year loan by the artist. Like many of Hirst’s pieces this one has also caused controversy. He describes the piece as a “modern allegory of truth and justice ”. The sculpture portrays a naked pregnant woman, a raised arm holding a sword, balanced by the scales of justice, standing on a pile of scattered law books. 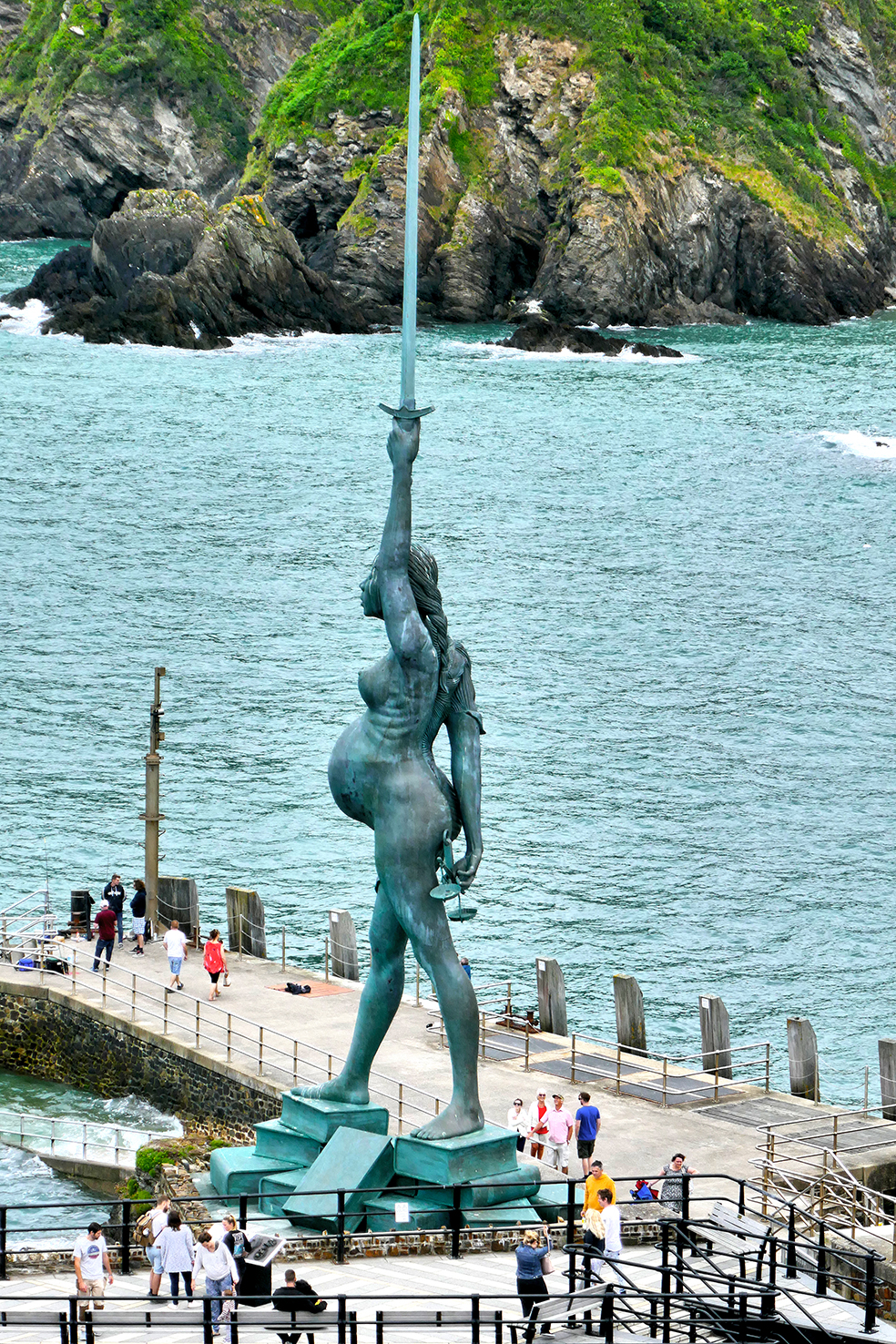 Half of the sculpture clearly shows the foetus, hence she has been called obscene, bizarre, and offensive whilst others see her as beautiful, and creating a state-ment. Weathered by the elements her green – blue patina blends with the sea as her skyward gaze looks out over the Bristol Channel towards South Wales.