This month Liz Hinds’ column tells us about her recent visit to A&E and what she is going to ask God when she goes to meet her maker – if she can remember.

The hottest day of the year, quite possibly the hottest day ever. The sort of day you want to be somewhere cooling. Like by the sea. Or in A&E.

But I’m getting ahead of myself. Back track to the Sunday before the temperature-record-breaking day. Younger Son and family have called in and we are sitting around chatting when Husband says, 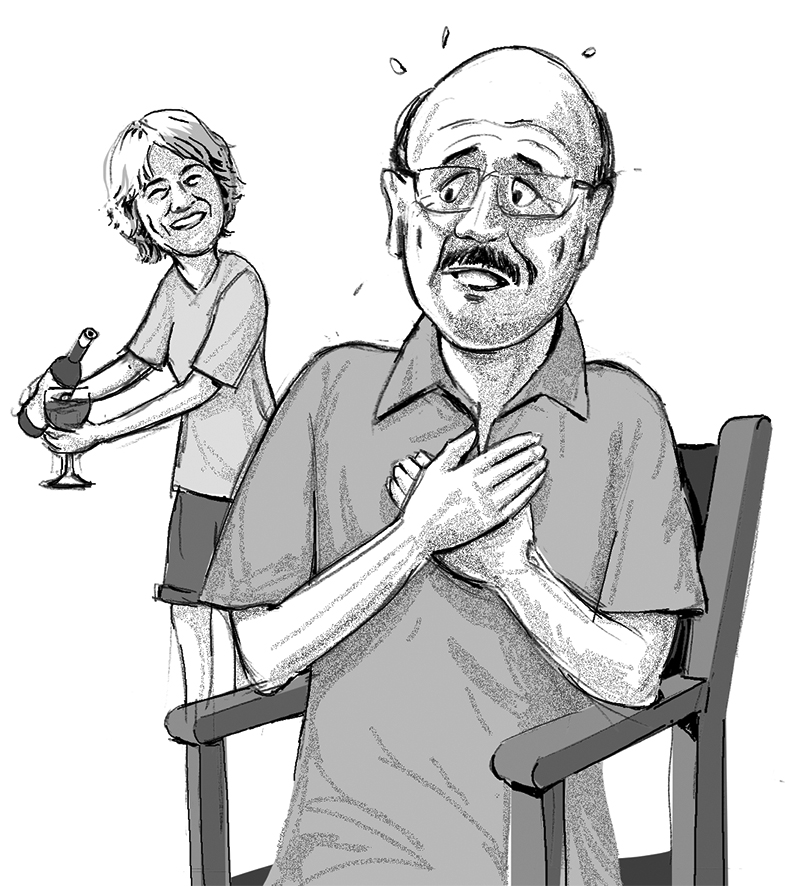 ‘I think I’m having a heart attack.’

We all look at Husband, see he isn’t writhing in pain and carry on talking. Now before you judge me let me explain that this isn’t an unusual occurrence. Any chest pain is considered a heart attack, any stomach pain is appendicitis, and any headache is a brain tumour. (The last two are my particular foibles.)

But four days later after being woken by a particularly nasty pain Husband pokes me in the shoulder and says, ‘You’d better take me to hospital now.’ So, there we were in A&E at a ridiculously early hour – a fact that did, however, provide ample justification, I felt, for having lemon drizzle cake for breakfast.

We were a little disconcerted when the voice on the tannoy informed us of the nine-hour waiting time but fortunately having a heart rate of 30 means you jump to the front of the queue.

There the doctors confirmed that, yes, he did have a heart attack, probably on Sunday.

Husband is one of the fittest people I know so this came as a bit of shock to us both. But the NHS is wonderful, and he was soon repaired and home again, which was a relief as he was becoming addicted to daytime television, and worse, telling me about it in much detail. So, all is well. For us anyway.

For others the story can be very different of course. As Husband himself said,

‘It didn’t feel as bad as I imagined a heart attack would feel.’

He got off lightly with an early warning.

When I get to heaven and meet God one of the first questions I’m going to ask him is,

‘Why? On what basis do you decide who’s going to live and who’s going to die? Most importantly, and this is the personal one that really gets me, even after all these years, why did you think it was right to allow a young mother of four to die when you could quite easily have let her live?’

Jesus’ friend and follower, John, in his gospel, tells us that Jesus said, ‘You may ask me for anything in my name, and I will do it,’ yet ask any Christian and I’m sure they’ll be able to tell you of someone they cared about who died too soon in spite of huge outpourings of prayer. ‘Why, God?’

If you ask a follower of Jesus to explain it – why didn’t God heal this person? – she may well offer a variety of answers but the only answer I can truthfully give is, ‘I don’t know.’

When my cousin was dying from cancer she phoned me one day and said, ‘I know why God isn’t healing me! It’s because I haven’t demonstrated enough faith.’

That seemed to me at the time – and still does – to be turning things upside down. If it depends on us it means either God is a demanding being who requires us to reach a certain level, or he’s not in charge. I don’t want that burden or guilt, and I don’t believe that’s what God wants for us either.

I have learned to accept that I don’t know or understand why bad things happen. That doesn’t mean I don’t get bemused or angry at God, even while I’m trusting him. Even now as I’m writing these words I think, ‘This sounds totally illogical and crazy,’ and I ask myself why I choose to follow Jesus when there is so much I don’t understand.

I suppose my answer is, because of who he is, and the example he set for us. An answer that is both simple and challenging.

On my arrival in heaven I also plan to ask God why he made teeth with nerves in them, why hair goes grey, and a whole load of other really important stuff. On the other hand, the way my memory is going I might just get to meet God and say, ‘You look familiar. Did you used to work in Sainsburys?’

And having told you about our initial reaction to Husband’s declaration that he was having a heart attack there’s only one way I can end this article. With the words Spike Milligan has engraved – in Gaelic to keep the local diocese happy – on his tombstone, ‘Duirt me leat go raibh me breoite.’

In other words…‘I told you I was ill.’