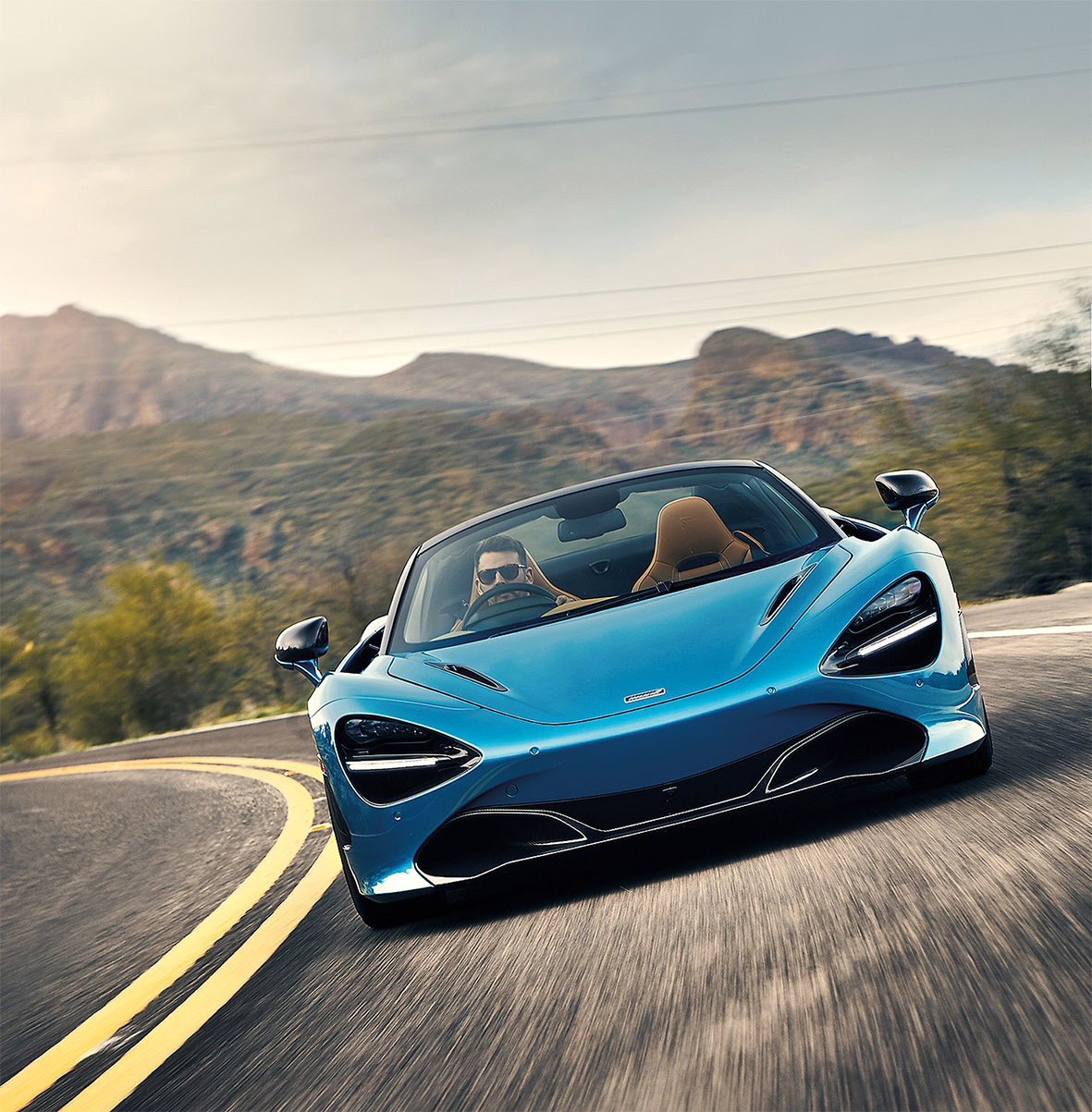 Quite simply this is without doubt one the finest and most astonishing cars I’ve ever had the pleasure of driving. That’s how I summed up my thoughts after having driven what was then the all-new McLaren 720S, approximately 18 months ago. I didn’t get a lot of time in it, an hour at best maybe; there were a host of other motor-noters present, and we were all vying for a drive. And however long the timeslots McLaren were offering that day, they were never going to be long enough. Nevertheless, after having “had my go” I wasn’t the only one left struggling to  collect  their  thoughts after an all-too brief blast through The Cotswolds in Woking’s 720bhp all carbon-fibre projectile.

The truth is, I’ve been hankering after another go in a 720S ever since I reluctantly handed back the keys that day – just to confirm that I’d come to the correct conclusion, of course.

After a few well-worded emails to McLaren, much toing and froing, and checking of our respective diaries, my pleas were finally answered. Well, almost. McLaren agreed to lend me their new 720S Spider – for 4 days! I’d finally got my second chance.

As per its hard-topped sister car, and like all the modern products of McLaren Automotive in fact, the hand-assembled 720S Spider is powered by a Ricardo-designed, twin-turbo V8. In this case it displaces just under 4 litres – 3,994cc to be exact – and sits amidships, just ahead of the rear axle line. It produces 710bhp. Or to put that in metric, 720PS. That’s where it gets its name from; Spider (or sometimes spyder or speeder), is an old name for an open-topped carriage. Torque incidentally is 568lbft, 0-62mph takes just 2.9 seconds (compared to 2.8 in the hard-top) and 0-124mph takes just 7.9. Top speed, where allowed, is 212mph. 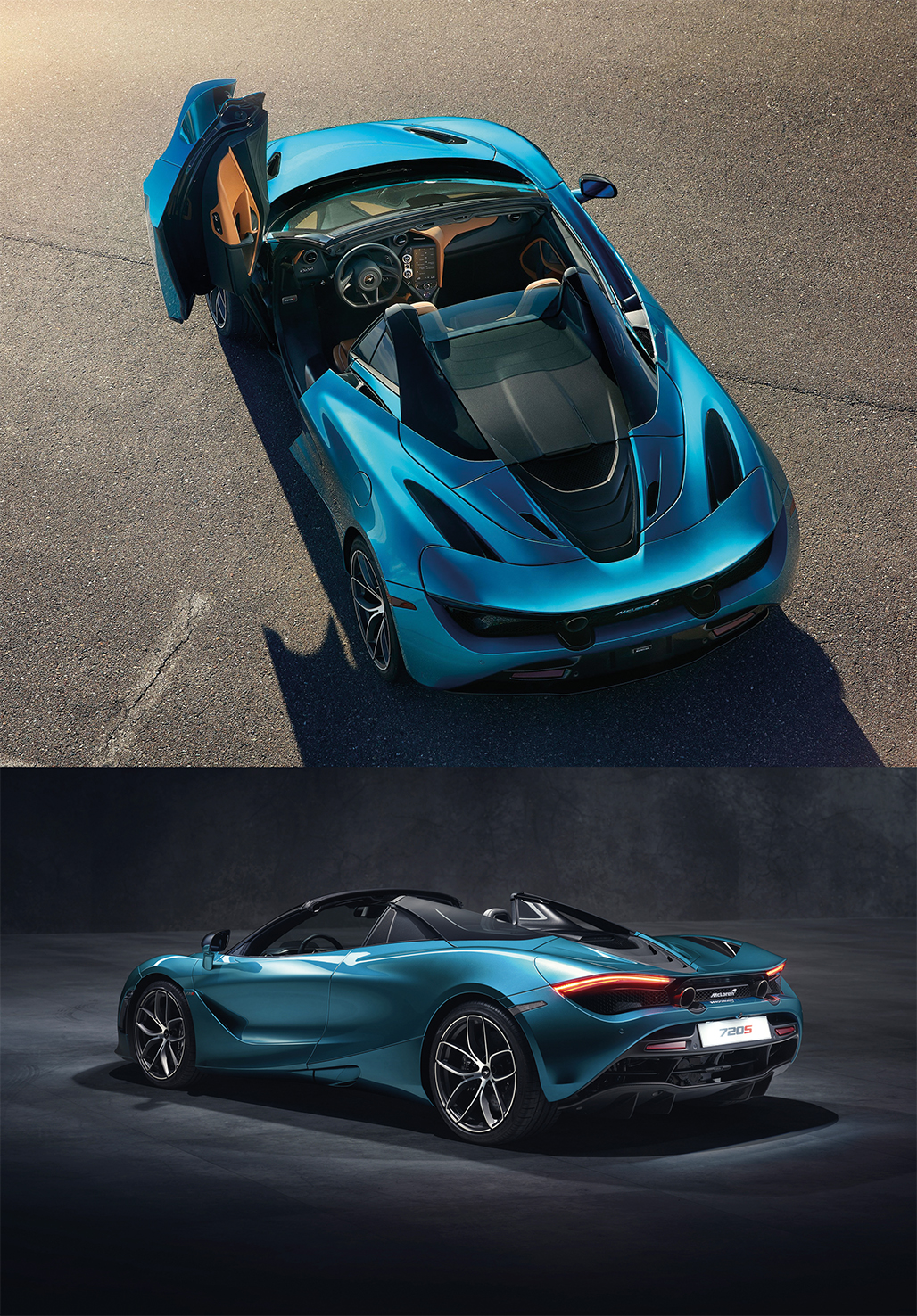 That’s with the roof up. Just in case you’re wondering, or you just happen to have a private runway long enough, with its roof folded away I’m told the 720 Spider will only reach 202mph. That’s a slightly less mind-bending experience, presumably.

Not that you’ll need to be going anywhere fast in order to draw attention. Park a 720 Spider anywhere and it doesn’t take long to draw a crowd. Camera phones, multiple “How fast will it go, and How much does it cost, Mister?” enquiries, plus numerous selfies soon become the order of the day. All of a sudden everybody is your new-found friend.

And yet despite its striking styling there’s nothing on a 720 Spider that doesn’t need to be there. Everything has a purpose. Those deep channels in the doors for instance, they help feed air into the high temperature radiators; a key element in the design of McLaren’s Super Series cars is the absence of any separate intakes for such things. The distinctive bug-like floating headlamps aren’t just a quirky design, their shape assists in feeding air into the low temperature radiators. Even the rear wing, which acts as an airbrake and rises to create extra drag and rear downforce under heavy braking from high speeds, folds flush when it’s not needed. It’s all very, very clever.

They’ve even hidden the door handles. Fortunately, though I know where to find them.

And as a result of those show-stopping dihedral doors arcing upwards whilst simultaneously taking most of the sill with them, access to the snug yet surprisingly airy cabin is relatively easy.

Once aboard you sit low, in a seat that like nearly everything else you touch, has been covered in the softest of leathers and feels as though it’s been specially sculpted just for you – once you’ve found the switches to adjust it that is. They’re hidden somewhere between the transmission tunnel and the seat base, as a result any necessary adjustment is a bit of a faff. A word of advice: if ever you’re fortunate to drive a 720S – of any kind – take your time making yourself comfy, and then immediately commit your seating position to one of the three memory settings. It saves a hell of a lot of fiddling later.

Fortunately, everything else you need to perfect your driving position falls nicely to hand. The mirrors – which seem so far away – are easily adjusted, and the steering wheel – carbon fibre in this case – can be brought in nice and close.

A gentle press of the starter button is all it takes to wake the V8, after which it settles into a lumpy, angry sounding idle. It’s by no means what you’d call symphonic; it burbles, but there are more wooshes and swooshes than there are high pitched wails or shrieks. McLaren clearly prefer to leave such attention    seeking to the Italians. Select drive, either by button or peddle, apply a light pressure on the throttle, and off you go. It’s that simple.

A number of things immediately become apparent. Once you’ve acclimatised to the low-slung driving position, the 720S Spider is actually fairly easy to drive. Visibility is excellent – although I’d definitely spec the rear-view camera, parallel parking a hyper car is never easy – and all of the controls respond immediately to your inputs. Should you want it, the seven-speed gearbox will even let you pootle along in top gear at a little over 30mph. And the ride, once away from battered B-roads that is, is much more compliant than you might expect.

So why all the fuss? 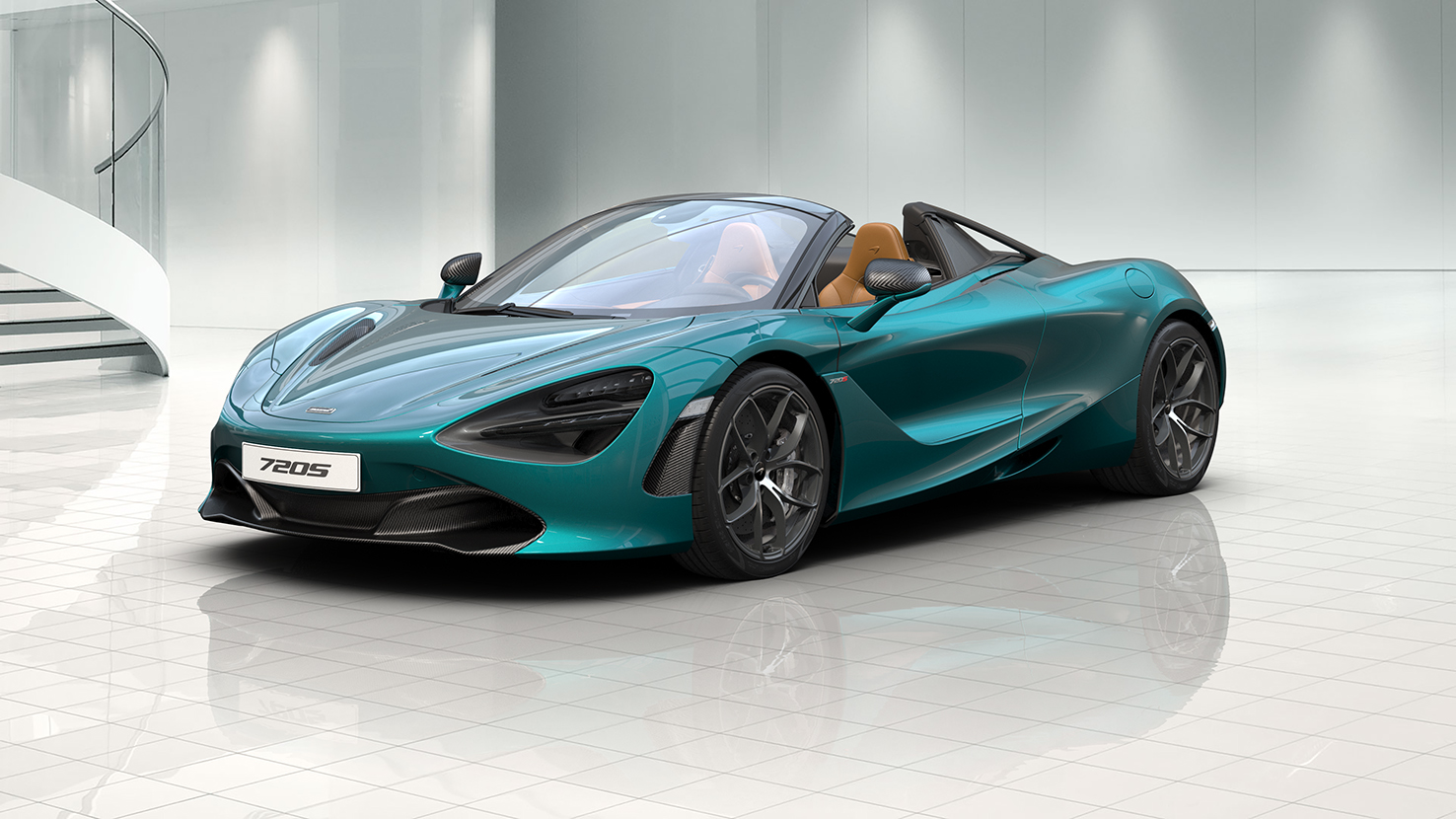 Once free of traffic, if you floor the accelerator, it very quickly becomes apparent that the 720S Spider requires you to completely re-calibrate your senses. The levels of grip and acceleration are like nothing else I’ve ever driven (that includes previous McLarens). The steering is simply superb, and the brakes are phenomenal too; you can shed speed as quickly as you can gather it.

And yet you can hear the radio, the sat-nav guides you through town, the air-con keeps you cosy, and there’s no highly-strung hysterics if you get stuck in traffic. If you’re prepared to pack reasonably light, you could even contemplate going away for the weekend in the 720S Spider. If that is, you can afford its £246,900 – before very expensive options – price tag, and its insatiable thirst for super unleaded. Performance clearly comes at a cost.

And so too, normally, does open-topped motoring. In most cases when a manufacturer decides to chop the roof off one of its cars the end result is something that’s heavier, more prone to chassis flex, has blunter handling, and as a result is thus less enjoyable to drive. That’s not the case here. McLaren’s Monocell chassis was so stiff a structure to begin with that the conversion from hardtop to err… well… it’s a folding hardtop really, seems to have made virtually no difference at all.

Open or closed, the 720S Spider is every bit as astonishing as I thought, (or should I say I knew?) it would be.

Many thanks to Wayne Bruce and Kevin Ritson at McLaren Automotive, and everyone at CARS, for the loan of the 720S Spider.