This month Liz continues on her travels in Croatia and discovers how a once war-torn country has been rebuilt, but still retains its scars. 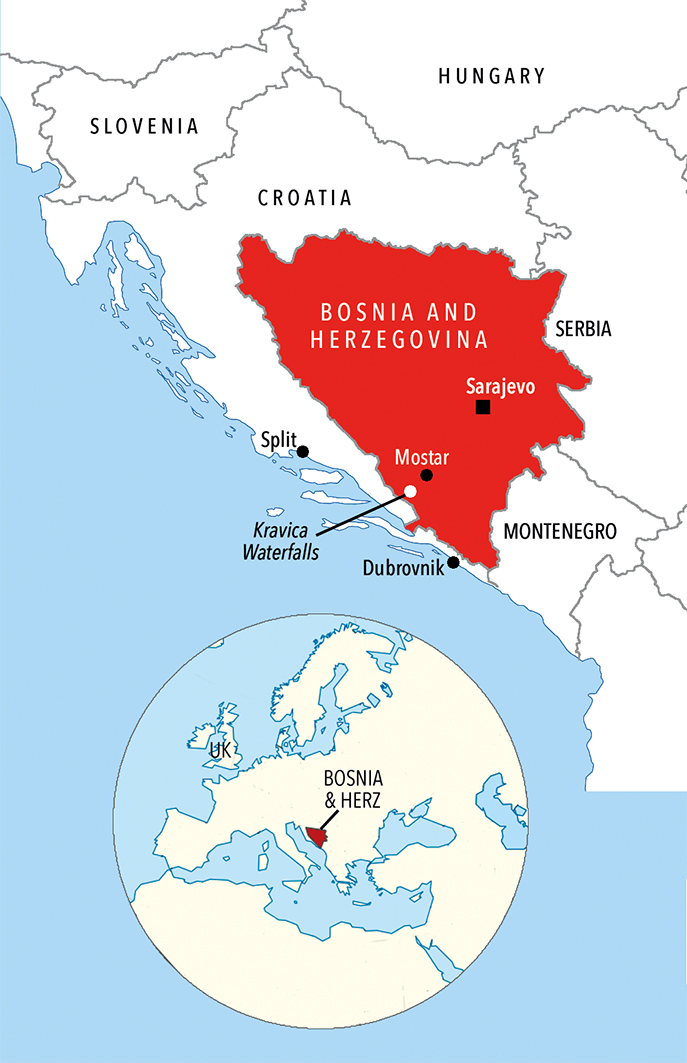 In my recent journey, island hopping in Croatia, the opportunity arose to take a trip to Bosnia and Herzegovina, a two-hour drive from Split. It’s not a place that instantly springs to mind as a tourist destination; in fact, hearing the name Bosnia probably conjures up a picture of civilians living in a war zone, risking their lives to obtain basic necessities. However, I was pleasantly surprised to find a beautiful country of medieval villages, varied landscapes, and a wealth of rich culture and traditions.

In spite of history leaving its mark, the country has claimed back its way of life and everyone we met on our brief visit was very friendly and welcoming. This can only be attributed to the stoicism of the people, as it’s difficult to imagine the hardships they had to endure.

Bosnia and Herzegovina’s geographical position between Croatia and Serbia made it vulnerable to national territorial ambitions. Firstly, ruled by the Ottoman Empire, it later fell under the control of Austria and Hungary, subsequently playing a role in the outbreak of World War I.

In 1918 it was incorporated into the newly created Kingdom of Serbs, Croats, and Slovenes. 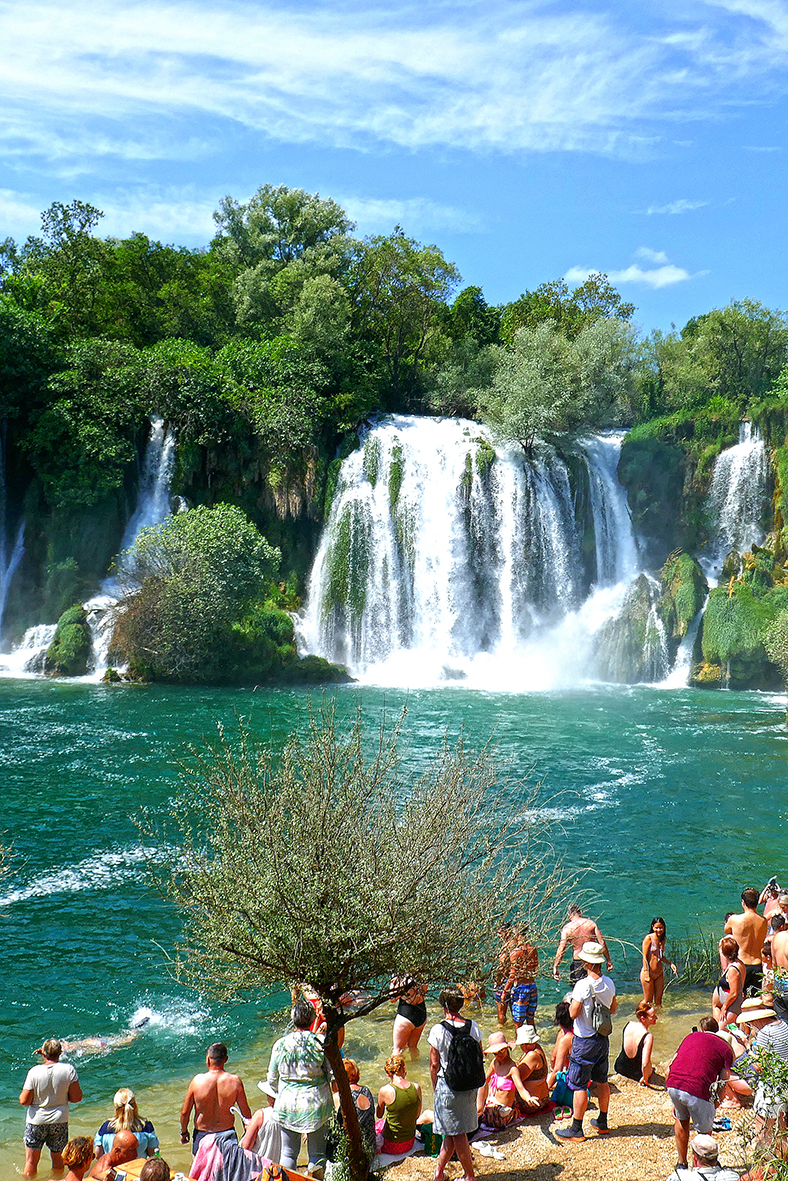 Following World War II it became a constituent republic of the Socialist Federal Republic of Yugoslavia. In 1991 the state collapsed, consequently the following year a referendum was held, and the majority of the population of Bosnia and Herzegovina voted for independence. The country’s Serb population opposed this and boycotted the referendum. This resulted in war as ethnic nationalists within Bosnia and Herzegovina, with the support of Serbia and Croatia, tried to take control of territories they claimed as their own. From the beginning of the Bosnian Conflict in 1993 to the end of the troubles in 1995 thousands of people were killed and more than two million people were displaced in the violent and horrific legacy of ethnic cleansing. Eventually in November 1995, with international intervention a peace agreement was reached – the Daytona Accords, bringing an end to the war.

On a sunny June morning our first stop was to see the breath-taking Kravica waterfalls, located on the Trebizat River. It was easily reached via a walking trail which offered superb views across to the 25-metre (80ft) high falls.

A small sandy beach (pic left) lies on the lake edge at the base of the waterfall which is about 120-metres (390ft) wide. This is a popular swimming and picnic area visited by tourists especially during the summer season. The blue water is so enticing and provides a great place to cool off before travelling on to Mostar 43 kilometres away. 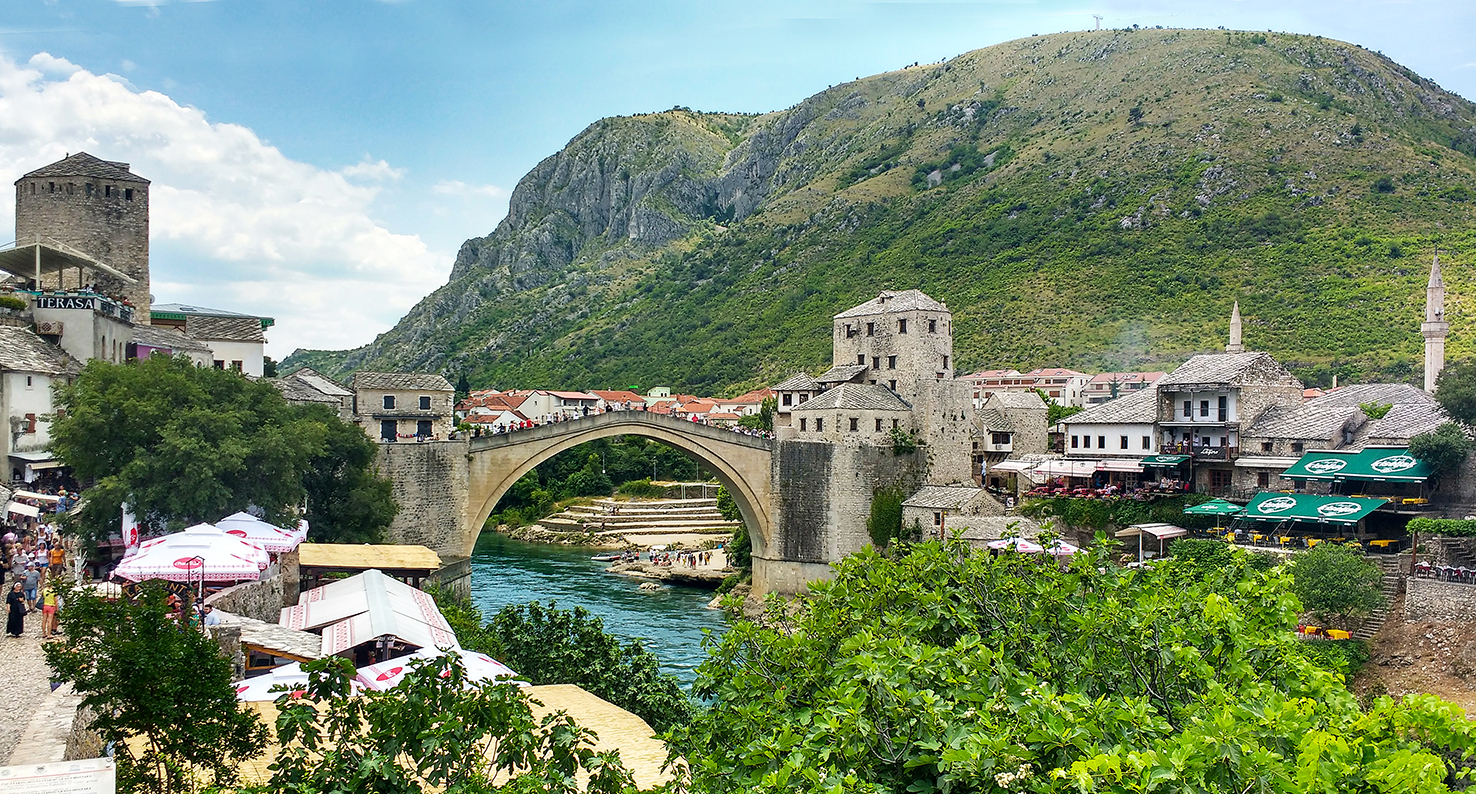 Mostar is a city in the south of the country which dates back to the 1500s when it was an Ottoman frontier town. Today it is probably most well-known for the iconic Stari Most (Old Bridge – main pic pictured above) from which it gets its name, derived from “mostari” – the bridge keepers. The medieval arched bridge and fortress was designed by the renowned architect Sinan and stood for 427 years at the heart of the city.

Sadly, on 9 November 1993 it was destroyed, ripping the soul out of the city and its inhabitants. Today, the scars of battle are still visible; bullet holes pock mark pastel painted walls (below right) and wide gaping holes, the result of mortar shells, let sun-light into the city’s abandoned buildings

After the war, reconstruction took place with an inter-national committee established by UNESCO, and on 23 July 2004 the rebuilt picturesque stone bridge opened, replacing the temporary cable bridge (pic above showing the cable bridge dated 1997); it now stands as a symbol of reconciliation. For more than 400 years, a rite of passage for many of the town’s young men is to dive from the bridge into the water 27 metres below, travelling up to 50 miles per hour (pics above left and centre).

Alleyways lined with souvenir shops lead away from the bridge (pics right), mixing east with west, as artisans, coppersmiths and traders in antiques tempt tourists to buy their goods in the bazaar. A museum tells the story of the bridge’s history and further on another contains a war photo exhibition where you can learn more about the conflict.

Mostar can easily be visited in a day as it is very compact, like a fairy-tale town, nestled into a valley surrounded by towering mountains and green countryside. Small cafes and delightful restaurants offer a cool place to sit in the shade, sip a Turkish coffee, and soak up the atmosphere. There are many ancient bridges, one of which is the Kriva Cuprija or crooked bridge (main pic below), it was the prototype of Stari Most. The bridges span uneven cobbled streets, and stone balustrades, where traders display their multi coloured hand-woven rugs and textiles. 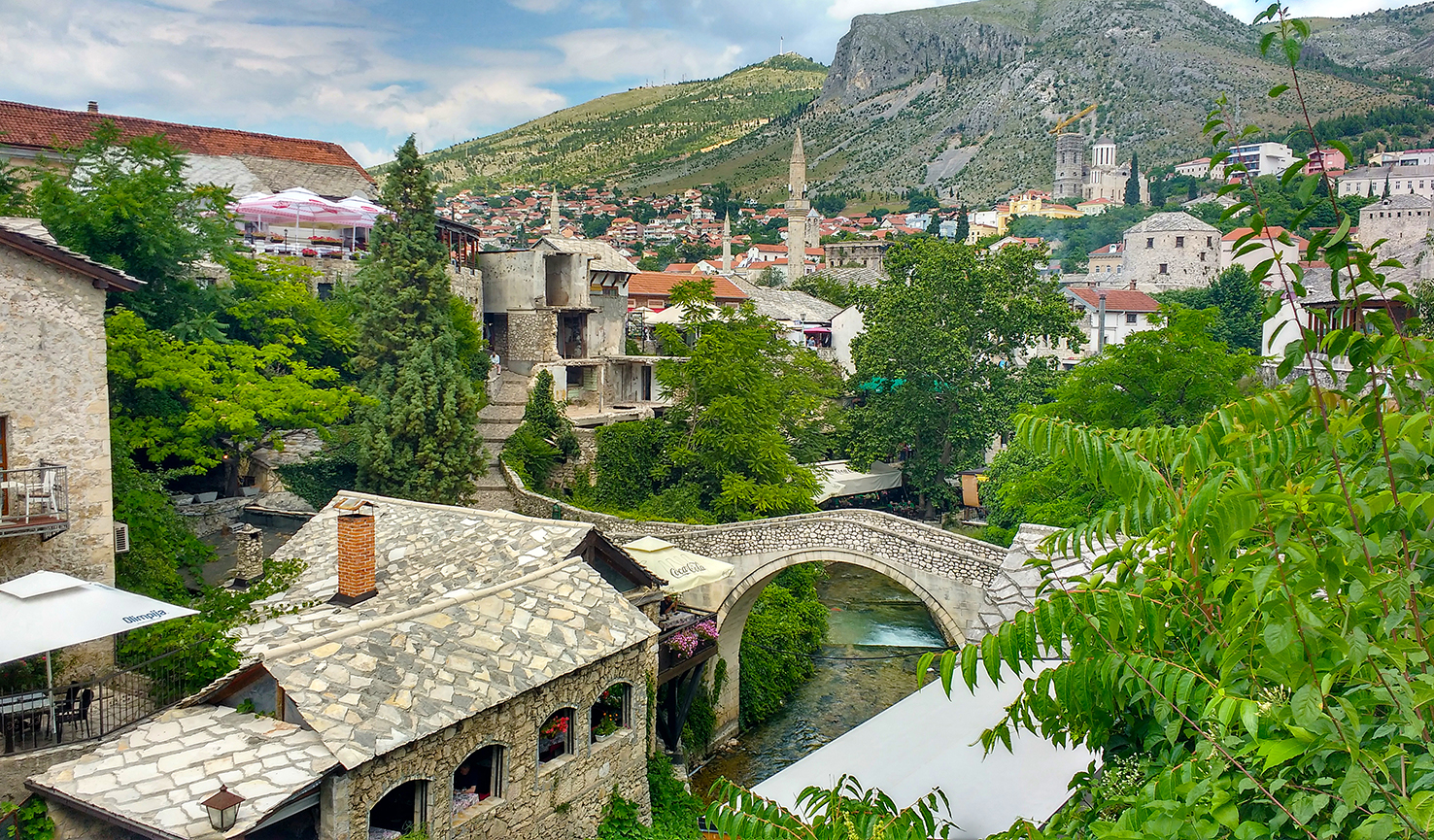 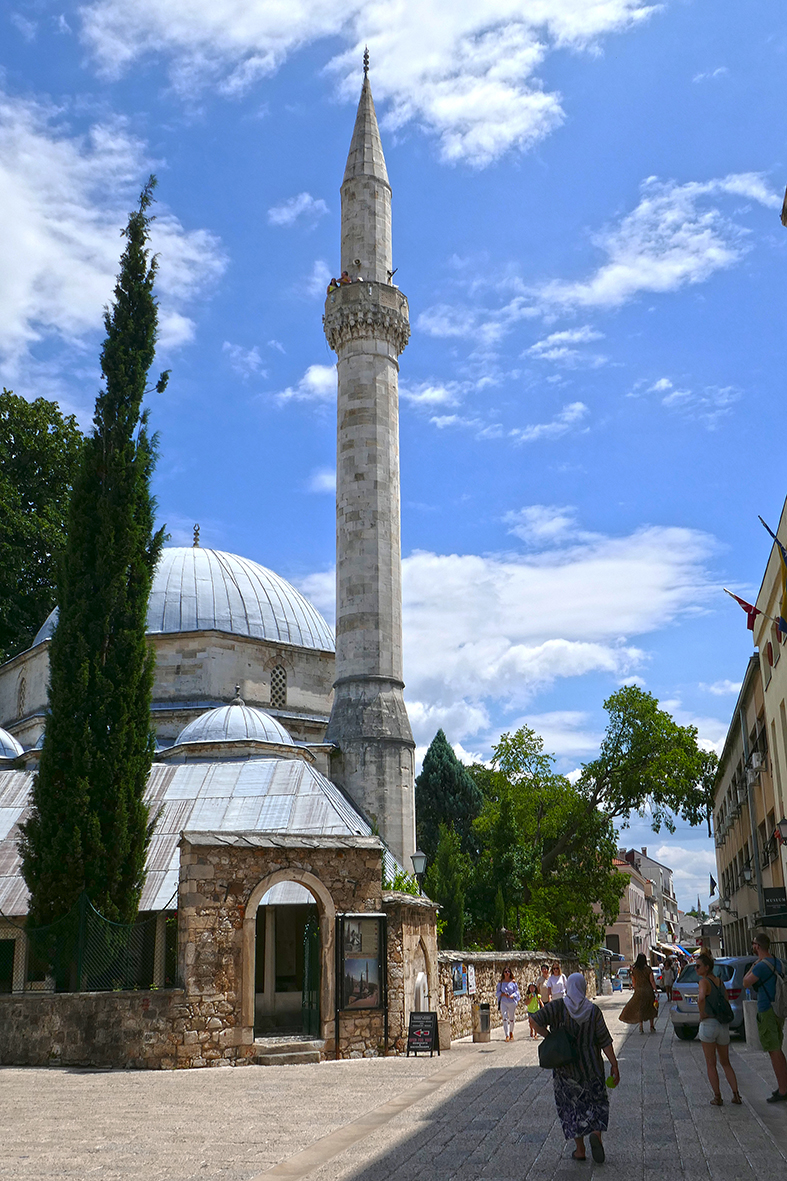 In Tepa Market, wooden tables visibly bow under the weight of precariously stacked glass bottles and jars filled with local organic honey and liqueurs, displaying the most vivid shades of red and orange.

Just around the corner from the market, stands the Koski Mehmed Pasha Mosque (pic left), built in 1618 and destroyed in the Croat-Bosnaik conflict. This is a place to stand and reflect on the events that took place outside these walls just a few decades ago.

Before leaving, I climbed a narrow winding staircase to a minaret, the view alone was worth the effort. Stretched out before me was a town of stone and painted buildings, tiled rooftops, and cobbled streets, while the emerald waters of the Neretva river, flowed beneath the dramatic peaks of the Velez Mountain in what is now a peaceful land.