To many of us, the word ‘cancer’ is taboo, but as more of us are open about being given the diagnosis, demonstrating that it’s possible to lead a normal life with the diagnosis, the word ‘cancer’ is becoming less of an emotional word. Sure, it’s not good news to be given a diagnosis of a type of cancer and it’s especially not good news to be told that the cancer has spread to other parts of our body, but still, apart from the inconvenience of the many, many hospital appointments that this generates, life goes on. 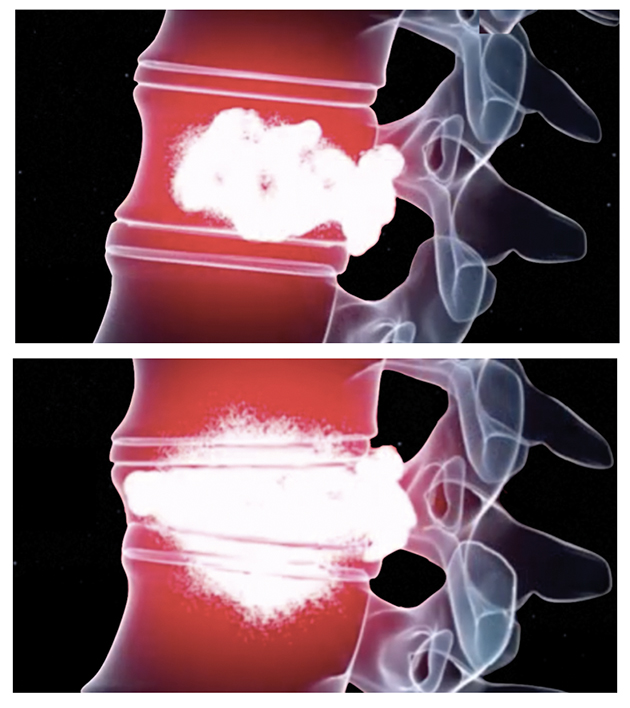 Here are some pictures which try to explain what I mean.

Top pic (right): This is a depiction of a spine, with the cotton wool appearance representing cancer occupying some of the spine and growing outwards toward the back of the spine.

Pic below (right): The next picture demonstrates how the tumour has weakened the spine to a point that the spine has collapsed a little. This is called a spinal fracture and this event is painful. Not good! 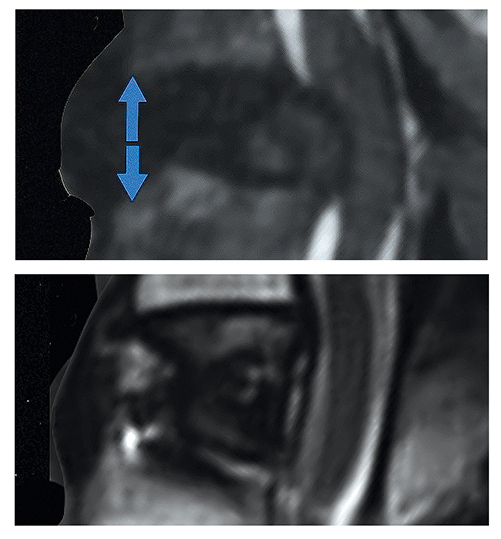 Top pic (left): This is an actual MRI of a tumour which has caused a spinal fracture. The two blue arrows indicate that if we can pull the fracture apart again, we can take pressure from that long grey vertical structure which is a spinal cord being squashed by the tumour. The owner of this scan was almost completely paralysed and the legs weakened over a day – pretty quick and very scary!

Pic below (left): The good news is that if we can surgically remove the pressure on the spinal cord and place scaffolding in the spine to pull the fracture apart, the spinal cord has a chance of recovery. The surgery has to be done as soon as possible though, because persistent pressure on the spinal cord results in permanent scarring and no prospect of recovery. Following surgery, radiotherapy can be very helpful in stopping the tumour from growing back and causing the same problem again in the same part of the spine. This is because surgery cannot get rid of the offending tumour completely when it is causing problems in the spine. 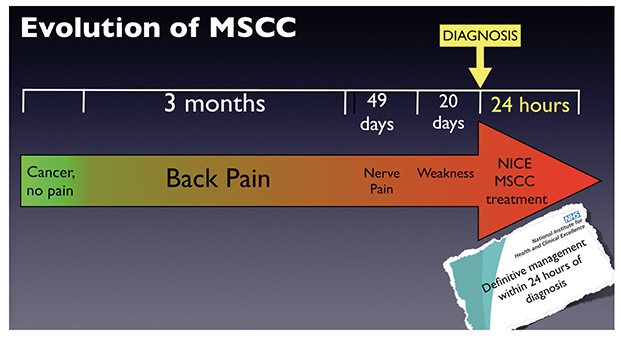 MSCC means Metastatic Spinal Cord Compression. Metastatic means that a cancer has spread away from where it initially formed in the body. For example, lung cancer starts in the lung, but it can migrate to the spine and cause metastatic spinal cord compression if left unchecked. The arrow diagram (above) shows that someone with a spinal metastasis/tumour which is growing instead of simply occupying bone, typically has back pain for around three months. Then, symptoms tend to accelerate, with the tumour causing a spinal fracture and the combined fracture and tumour irritating spinal nerves. This causes nerve pain and happens over roughly a month. Over the next few weeks, people typically find that they are getting weaker, with a common complaint of ‘jelly legs’ and finally, the legs stop working altogether, with virtually no prospect of recovery when the complete paralysis has been there for more than two days (according to research).

Wouldn’t it be good to identify the spinal cancers which are going to cause harm at a time when the harm has not yet happened? If we could identify the risky spinal cancers, we could look at either early radiotherapy, before the pain starts, or even consider putting cement reinforcement into the affected bone to stop the problem from developing.

In the UK, the government commissioned a working party to explore ways of predicting spinal fracture with spinal cancer and despite a massive amount of work and equally massive document, not a single technique was identified.

The way we try to help people at the moment is to look at pictures, look at people, and give an educated guess about treatment, sometimes using algorithms which give guidance, but not answers.

I’m helping a group of people to see whether MRI can be used to find the Holy Grail of predicting spinal fractures with high accuracy. The Bevan Commission has funded the project and an MRI machine in Swansea University is revved up and ready to go – 13 people with spinal cancer have already given up an hour of their time to have an MRI scan of their spines and we have funding to scan another 17 people. The preliminary data has shown that there’s a definite difference in the strength of spinal metastasis bone when compared with normal spinal bone, but we can’t clinically apply this information yet as we need to gather more data from more people.

So, if anybody out there can easily travel to Swansea, South Wales, UK they can have an MRI scan, please drop me a line and I’ll send you an overview of the study. Sadly, we don’t have funding to reimburse your time and overheads – besides, the ethics panel would probably have stopped us from offering reimbursement as this may be misinterpreted as coercion!

I hope that you found this useful. A great paper about metastatic spinal cord compression was written by Roy Patchell and is available in the Lancet journal, if you’re interested in reading a landmark and game-changing article about how surgery helped people to avoid becoming paralysed.