In the Winter edition of 2016, I wrote an article entitled “All the World’s a Stage – Act I” covering the history of the Theatre Royal, Temple Street, dating back to 1807. Mother Goose was the first pantomime to be performed there during 1809, and it was still in use until the 1880’s, when it was left empty; Theatre Royal was finally demolished during 1899. It served Swansea as a place of entertainment for 93 years. Prior to its closure a drill hall situated on Singleton Street was purchased during 1892, but by 1897 this was gone and the Grand Theatre was built. This is Act II and looks at the early history of the Palace Theatre.

In 1887 Queen Victoria celebrated her Golden Jubilee. In January 1888 the Lawn Tennis Association was formed. August saw the passing of the Local Government Act establishing the County Councils and County Boroughs. The Act allowed women to vote at County and Borough Council elections, however this was not granted until 1907. Swansea County Borough Council was formed in 1889. November 1889 saw the first local elections in Swansea, 16 candidates for 7 seats. The biggest news of 1888 was the murder of five women in Whitechapel, London at the hand of Jack the Ripper. The population of Swansea by this time had reached 100,000.

Early in 1888, the junction of High Street and the Prince of Wales Road in Swansea, was a district which according to the South Wales Echo, 19 October 1888, was described as lacking in architectural beauty. A new theatre had been built under the direct-ion of architects Messrs Bucknall and Jennings of Swansea, Bristol and London costing £12,000. The horse shoe shape theatre was built on the site of the Ancient Briton public house and was a music hall for a variety of entertainments. This was a joint venture by the tramway company, and a Mr. Almond. The hall would have accommodated an audience of nearly 1000 people; 375 in the main theatre, the balcony holding 260 and the gallery a further 270 people. This is the building that we see today. Bucknall and Jennings’ other building work included the private Adelina Patti Theatre, at Craig-y-Nos Castle, built 1891. 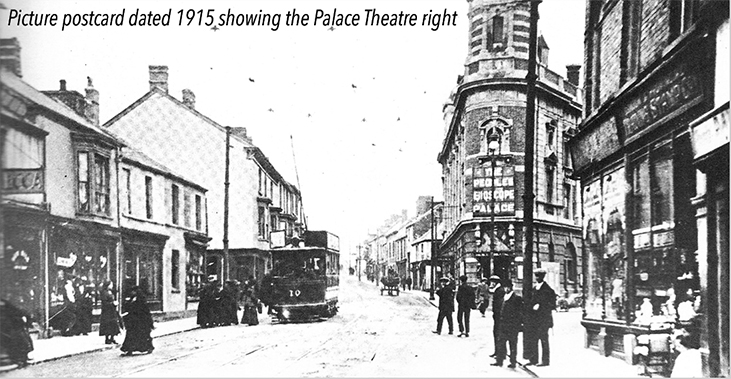 South Wales Daily News reported on 21 December 1888, that the Swansea Pavilion had been booked up till the following year. The Western Mail, 26 December reported in an article of the opening of the Swansea Pavilion Music-hall and Theatre of Varieties, on the Christmas Eve. ‘Amongst those present at the opening were Mr D.F. Sugrue (Chairman) Mr John Thomas (town clerk), and Dr Howell Thomas. The first artist, Miss Alice Melville, Mr George Belview followed, his chief song being attired in military attire with sword exercises. Perhaps the greatest success of the evening however, was the juggling performance of Jules Poule. Fred Griffin, comedian. Other artists producing favourable impressions were Ashford and German, variety performers, Miss Polly Randall, and Miss Madick.’

The theatre was still owned by the mysterious Mr. Almond, who in 1892 leased the theatre to Mrs Adelaide Stoll and her son Oswald Stoll.  South Wales Daily News reported on 18th April, the reopening of Pavilion Music-hall, known as the ‘Empire’. It had undergone extensive alternation, improvements and had been re-decorated. The performance for the Easter period was Leoni Clarke and his troupe of 170 animals; Mr George Robey, comedian; Harran the American acrobat to name but a few. Oswald Stoll ran the theatre for 8 years, when in 1900 a new 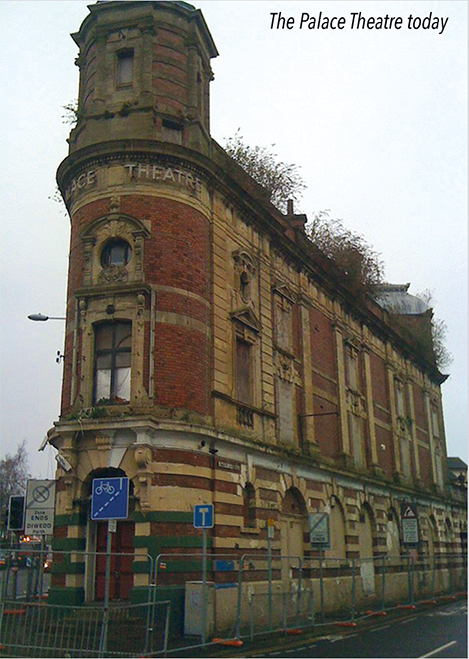 As the new century dawned, the theatre reverted to ‘The Palace Theatre of Varieties’, after Oswald Stoll took the name ‘Empire´ for his new theatre. By this time the theatre was only 12 years old, it was a difficult period, with acts performing at the new Empire theatre. The major player in the story of the Palace was William Coutts. He also had the management of the Star Theatre in Wind Street. With profits from this theatre, Coutts had brought the lease of the Palace Theatre in 1905. Coutts arranged acts for both places, so there wouldn’t be any clashes!

By 1912 the Palace was called Popular Picture Hall, all live shows ceased, and it was used as a cinema. The cinema lasted for a further decade, but the Palace hadn’t been designed for the purpose of a cinema. In 1923 the Palace once again reverted to The Palace Theatre of Varieties, by 1928 manage-ment had changed hands to Reeve & Russell Ltd. There were live performances and also the occasional film.

It’s during the Swansea Blitz, February 1941 where this Act will draw to a close when the Palace was used as a temporary morgue, for those Swansea civilians who lost their lives during that terrible period of February 1941.