I’d heard good reports of the new Spanish restaurant that had recently opened in the marina, so Simon and I trotted down to the foot of the Meridian Tower to see for ourselves.

El Pescador translates from Spanish as the Fisherman, so I was expecting a good selection of seafood and sure enough there was plenty to choose from, but carnivores are equally well looked after.

One of the foods that Spain is renowned for is its Jamon Iberico, the dry cured hams from Iberican pigs.

Some regular readers will remember Portuguese chef Tatiana Bento, who used to write for us until she returned to Portugal, where she has an architectural practice and holiday lets. When we visited her a couple of years ago she decided we should drive to Spain to eat jamon, as the best was only available across the border. It took us a day to drive to Ayamonte and back, but we were rewarded with some of the best ham that we have ever tasted. So, I was delighted to see that El Pescador has jamon on the menu. Yes, it is expensive, but when you consider the processes involved in its production you can see why. The Iberian piglets are fed on a diet of acorns and cereal until they are 18 months old. From October to January they are outside eating acorns from the evergreen oak, (Quercus Ilex) which is also the national tree of Spain. The acorns contain oleic acid, the same chemical that is found in olives which gives the fat on the pig a distinctive flavour. The amount of land required to rear these piggies is huge – only two pigs per hectare which allows 6-7kg of acorns per pig per day.

El Pescador has several different types of jamon on offer, each with its own distinctive flavour. I had thinly sliced tenderloin which I paired with bread and garlicky olive oil, along with a large glass of red house wine and I was very happy. Nothing makes me think of Mediterranean holidays more than grilled sardines; their plump silver skins charred and crispy while the meat remains succulent. It was Tatiana that taught me how to eat these the Portuguese way – no cutlery, just fingers to pull the flesh away from the bone in one clean sweep. These little beauties came with a traditional Canarian green sauce or mojo verde, made with coriander, parsley and green peppers.

My main course of pulled lamb with a spicy chorizo sauce was tender and had evidently been cooked for a very long time, so that it was meltingly soft. Simon who normally opts for the meatiest option on the menu surprised me by choosing the sea bass, which by the time he’d finished all that was left, was a cartoon like fish skeleton. The choice of chips dusted with paprika, rice or Canarian style potatoes was difficult but the chips and rice won the day. Canarian style potatoes involve cooking small potatoes in their skins and to be truly authentic in sea water. They go wrinkly and the salt forms a crust on the skin. Traditionally they are served with a mojo verde or mojo picon which is red and slightly spicy. They are on my list for another day.

El Pescador not only scored highly for its fabulous food, but also for the excellent service – being attentive but not intrusive.

Open for lunch from 12.00, El Pescador has a very reasonably priced two course lunch for just £12.50.

It is great to see another addition to the Swansea restaurant scene, especially one that serves such wonderful fresh fish. 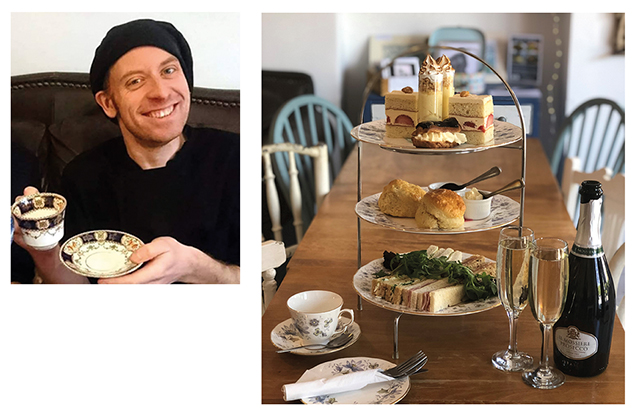 Next month sees the arrival of a new guest chef to Bay, Ben chef and joint owner of The Front Room Café in Mumbles. One of Ben’s specialities if patisserie, so I’m looking forward to extending my repertoire in the dessert department in the months to come. Ben and his business partner Ken, who runs the front of house, host lots of different events from the café including wine tasting evenings in partner-ship with Mumble’s Fine Wines. Sunday lunch is a once a month affair with the next on 24 November; numbers are limited so booking is essential.

Afternoon tea has made a resurgence in the past few years, with the elegance of a bygone age being brought into the 21st century. This is where Ben and his pastry chef skills come into their own. Each tier of the traditional cake stand holds delicious savoury and sweet treats, some with Ben’s own twist. I’m sure Lady Grantham never had a shot glass containing a deconstructed vanilla cheesecake on her tea tray. Competitively priced at just £15.50 this is a very affordable treat but remember that you must book in advance.

It’s half-term and we are called upon to take care of our 4-year old grandson for the day – no problem – we are just about to go to print so no panic. He’s quite happy to sit at the desk in our studio with his colouring and the occasional use of the stapler and hole punch – as well as being in charge of the paper shredder – supervised of course.

Now usually when we are on the last lap of production of Bay, there is no time to stop for a proper lunch – at best it’s a sandwich and a coffee on the hoof, but today we have had a special request from our work experience lad – pizza please.

So, it was a quick trip to Uplands to Brewstone where they do an excellent children’s pizza for a fiver. He’d been there before, so we knew that it had already passed muster. Sitting in the window seat watching the shoppers dodging the showers we made our choices from the menu. Welsh rarebit in our house is usually a couple of handfuls of grated mousetrap cheese on ready sliced bread – here it is a dish fit for a king. Good quality bread topped with a generous slather of tangy cheese, grilled until golden brown and served with salad leaves anointed with a honey and mustard dressing. 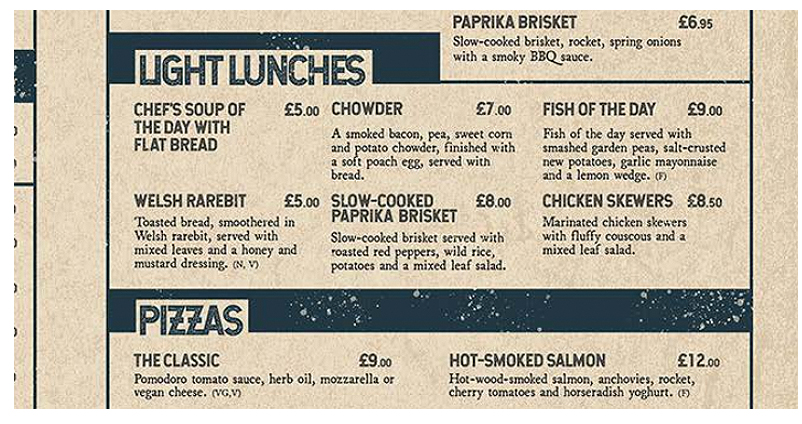 My go to lunch if given the chance, is always soup. I’m not too fussy what flavour although I draw the line at sweet potato, which I consider to be the food of the devil. Here in Brewstone they have taken soup to another level altogether, in the form of chowder. What’s the difference between soup and chowder? I’m not sure, and I don’t think it is particularly important. This chowder was thick and creamy and full of peas, sweetcorn and smoked bacon, and as if that wasn’t enough it was topped with a perfectly poached egg. Brewstone class this as a light lunch – in my book this is more of a hearty man-size bowlful.

The pizza was a triumph – although it defeated the 4-year old we managed to finish it all bar some crust. I’m rather looking forward to the next half-term holiday – it will give us another excuse to take time out for a proper lunch. Lunch for 3 including coffee and lemonade £20