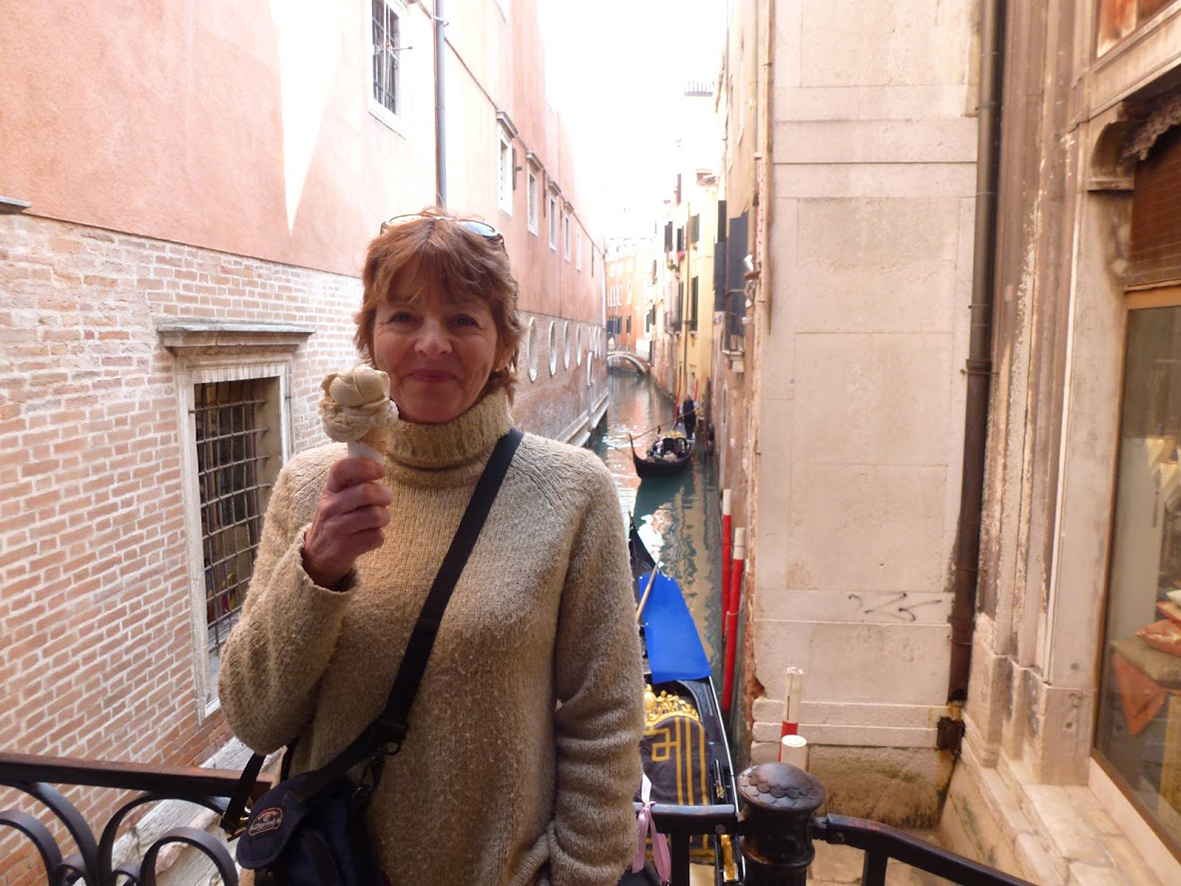 This month Liz writes on one of her favourite subjects – ice cream. I’m sure many of you have happy memories of Forte’s Ice Cream Parlour in Mumbles but do you remember the FREE post war ice cream? Do get in touch if you do.

Imagine being told there was FREE ice cream – but you’d missed it. A bit like coming into university one day and being told, ‘Paul McCartney and Wings played here yesterday but we couldn’t let you know because mobile phones haven’t been invented yet.’

Always just missing out on things. The story of my life.

I grew up in the fifties being told that on the day war ended Mr Macari of Forte’s Ice Cream Parlour in Mumbles gave every child in the village a free ice cream. It sounded then – and still does to be honest – like my perfect day.

Many years later I told this story to a group of people and one woman said, ‘That can’t be true: there was sugar rationing in those days.’ I’d never liked her very much and I liked her even less after that.

My love of ice cream began in Forte’s. In those days Forte’s Ice Cream Parlour was on the corner of Oystermouth Square by the bus station. Its distinctive blue and cream livery, wicker chairs and glass-topped tables held the promise of delight for a child who, with nose pressed against the glass of the cabinet, would peer at the sundaes displayed and dream which one she’d choose if she ever got the chance.

I’m sure I must have had a North Pole or a Banana Split on special occasions but mostly I had to be satisfied with a cone, a 99 if I was lucky. As for the Knickerbocker Glory, well, that was way outside the budget of my family.

Having an Italian daughter-in-law has brought many benefits to our family, one of which is reason to visit Italy. My definition of a good holiday involves an ice cream a day, and of course, Italy is the home of ice cream or, more accurately, gelato: the Chinese would say they invented the very first ice cream twelve thousand years ago.

Exact dates and names vary but most people agree that Florence in the seventeenth century was the birthplace of gelato. Strangely enough it wasn’t the amazing Leonardo da Vinci – he was too preoccupied with flying machines – who invented it but rather an alchemist who created fior di latte for the Medici family. Soon afterwards Bernardo Buontalenti, an architect, came up with gelato alla crema d’uovo (egg cream). 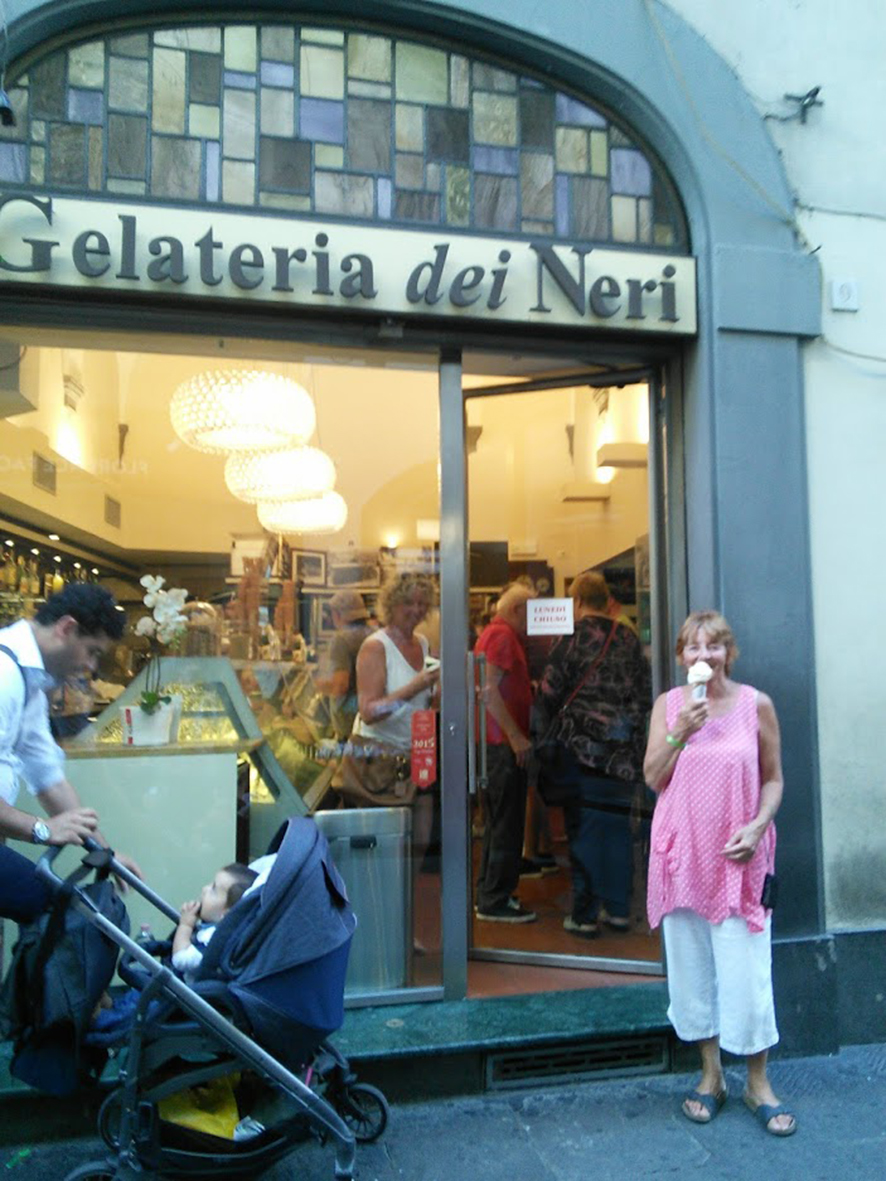 Now it just so happens that Husband and I spent our recent holiday in Italy taking in a visit to Florence. High on my, to-see list, alongside the Uffizi Gallery and the Duomo, was Gelateria dei Neri, a shop selling the original Buontalenti gelato (see pic right). And I wasn’t disappointed. It was deliciously creamy and sweet.

I could easily sing the praises of all the flavours I ate on holiday but instead I’ll just mention one, the first ice cream I’ve met that I didn’t like. There are flavours I know I don’t like but this was mela e miele. Using my well-it-sounds-a-bit-like method I decided this was melon and honey and gave it a go. Yuck! I was told later that mela is apple, but it didn’t taste like any sort of apple I recognised. I even – wait for it – left some ice cream!

So, what’s the connection between ice cream and my faith, about which I normally write in some shape or form?

There are many stories, especially in the Old Testament, that sound like myths and legends – David and the giant, Daniel and the lion – and even in the New Testament you’ll find apparent contradictions that can lead to speculation about authenticity.

I’m hoping a Bay reader will be able to tell me if my ice cream story is myth or not, but the veracity of the bible is less easily confirmed. There is some evidence, but it’s not called the Christian faith for nothing. The writer of the letter to the Hebrews says, ‘Now faith is … assurance about what we do not see.’

Shortly after I became a Christian I had a very real struggle with doubt. Suddenly it all seemed too ridiculous for words. A God so enormous he could hold the whole of creation in his hands while knowing how many hairs I have on my head and, more worryingly, every thought inside my head.

At the time a wise minister suggested I think of Jesus the man, bring God down to size in a way, to something I could cope with. Once I’d done that it all came back into focus – I could make sense of the stories of Jesus and his message of love – and I made the decision that I would have faith, that in spite of all my doubts and questions and wonderings, I would choose to believe.