They may not be as well-known as the monsters of progressive rock, but the legendary Pendragon are certainly big enough and popular enough to have stood the test of time. While headliners such as Yes, Jethro Tull, King Crimson, ELP and Marillion have risen to great heights and sunk into dormant periods, Pendragon have always been there or there abouts, touring the world, writing new music and releasing dozens of albums. For more than four decades they’ve delighted their loyal fanbase with their combination of mystical poetic lyrics and classically-inflected folksy rock fusion. They’d be the first to admit they’re not everyone’s cup of tea. But you’ve got to hand it to them. They’ve got staying power. 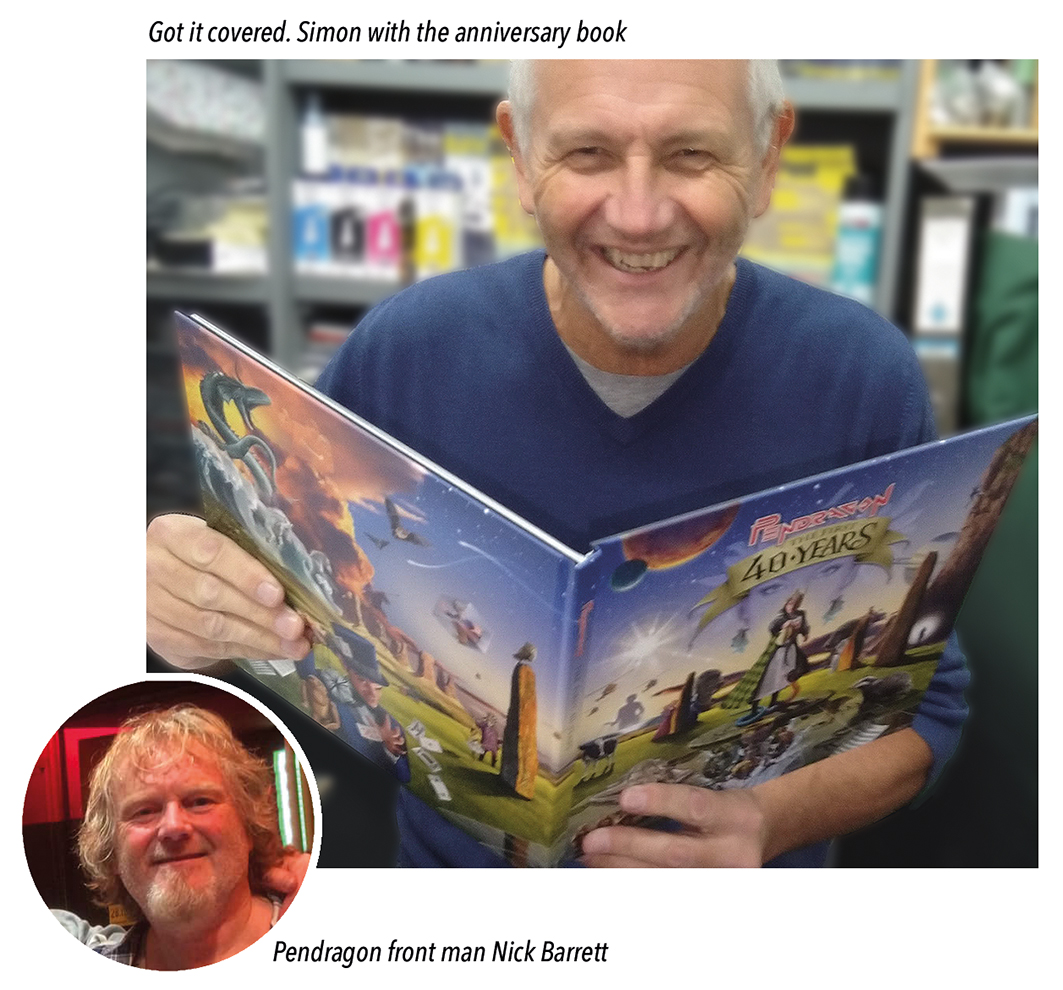 They might never have made it at all had it not been for the Welsh connection. As the group’s frontman, guitarist, keyboard player, singer and songwriter Nick Barrett explains in his history of the band. Back in the 1980s and 90s, Pendragon was struggling to create an image that could stick in the public’s mind and put them on the rock music map. Then it happened. The singer was flicking through a CD rack in a motorway service station shop when he saw a classical music album “with some very impressive cover artwork by a Welshman called Simon Williams, and the Pendragon we know today had arrived.” The artist in question was of course Bay magazine’s very own art director Simon Williams, the man who does all the layouts, illustrations, maps, artwork, photo editing, typesetting, pre-press technical stuff. 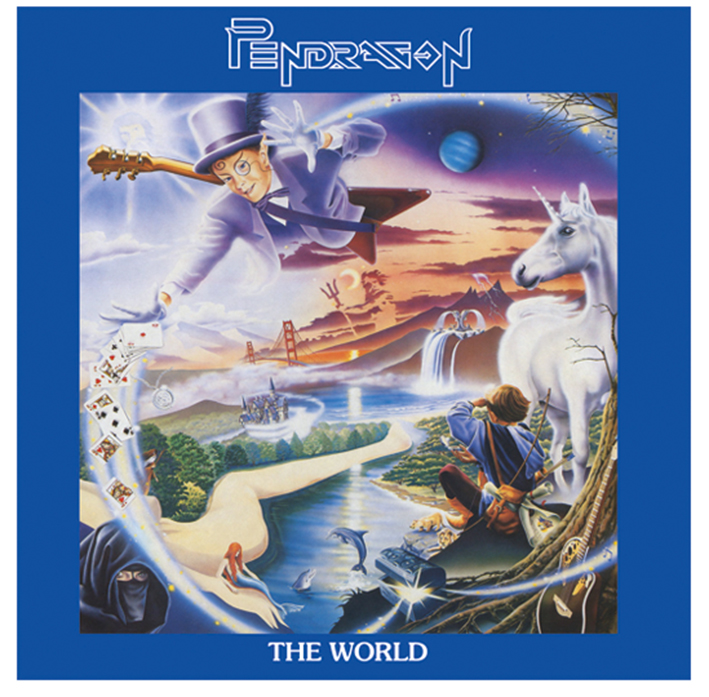 Such was Simon’s influence on Pendragon’s visual identity that when the first album with their restyled cover artwork was released, the music establishment thought Pendragon was a completely new band. As Barrett says, ‘The World’ was met by much critical acclaim, bringing with it “a tidal wave of new fans. Even the press began to realise that Pendragon was a force to be reckoned with.”

Over the next few decades Simon continued to create album covers for the band. And so, in 2018, when it came to produce the artwork for their 40th anniversary commemorative 5-CD extravaganza, he was the obvious choice to create a lavish design to go with the band’s celebration. It was a huge project for Simon to take on, especially as it came at a time when he was also drawing highly complex bottle label artwork for the Seedlip gin brand. But there was at least the advantage that this project could be created digitally. Simon’s earliest album covers had been done the old-fashioned way, using an airbrush, scalpel and drawing board. 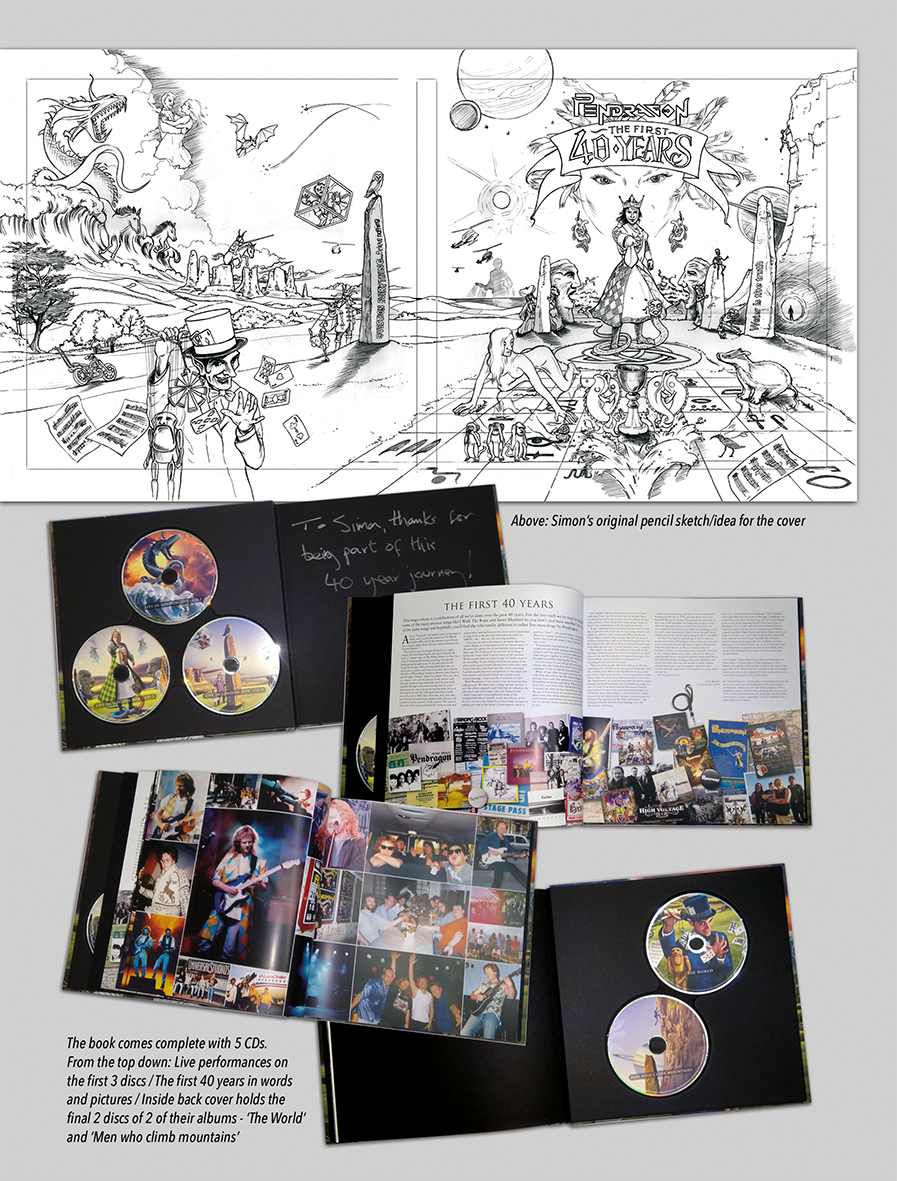 So began the labour-intensive weeks of putting together the digital tapestry that is the cover of ‘Pendragon – The First 40 Years.’ Says Simon, “it was a bit like doing a jigsaw puzzle. There were so many elements to it. And, of course, there was the small matter of my full-time work on the Bay to contend with at the same time.” The result, shown here, is a masterpiece of Arthurian legend, standing stones, mythical beasts, puppetry, psychedelic helicopters, Friesian cows and cosmology. Bigger even than a 12-inch LP, the cover is large enough to show off the incredible multi-layered detail of Simon’s work. “There’s a lot of symbolism in it,” he says, “and people always say that they see hidden meanings in my album covers.” So, what are the hidden meanings? “People see what they want to see, and that’s fine by me.”

‘Pendragon – the First 40 Years’ (price £65) is available from www.pengragon.mu