Emlyn’s film recommendation for this issue is one for all the family, and we are in no doubt that it will make it to all the mainstream cinemas in Swansea.

Six years is a long time to wait for any sequel, let alone one to a $1.3 billion cultural behemoth that was at the time the highest-grossing animated film in history. The temptation to get a follow-up made as quickly as possible must have been overwhelming, which makes it rather impressive that they’ve waited this long to release Frozen 2. At last, parents will have a new selection of songs to buy them a bit more time between repeat listens to Let it go.

The trailers have been very light on plot detail, so we shan’t give anything away here, but we pick up some time after the events of the first film with life in Arendelle pretty much perfect, which obviously can’t last or there wouldn’t be a movie. Suffice to say that a new danger emerges, prompting Elsa, Anna, Olaf, Kristoff and loyal Chewbacca-ish reindeer Sven to undertake a quest into the north to try and find a way to save their kingdom.

First and foremost, Frozen 2 is a preposterously pretty film. Its predecessor was more or less wall-to-wall ice and snow, but the sequel is working with a much bigger colour palette thanks to its autumn setting which leads to moments of genuinely jaw-dropping beauty. The golden light, filtered through red and gold leaves to dance on the characters’ faces really is a sight to behold, and the landscapes our heroes travel through look almost photo-real in places, while somehow never providing a jarring contrast with the more stylised, cartoony human figures. Ice and snow do feature of course – the clue’s in the title – and Elsa’s ice creations are delicate and ethereal enough to completely sell their magical origins. Disney animation has clearly spent a fortune on this, and every dollar shows on screen.

But looks aren’t everything, and this is after all a musical, so how are the songs? By and large, very impressive. There probably isn’t one that’s as great and immediately justifiably iconic as Let it go, but Elsa gets two big solo numbers this time out, that fill similar roles for her character and give Idina Menzel a chance to really show off her pipes. Kristoff gets a particularly entertaining song called Lost in the woods where the disconnect between how it’s performed and how it’s presented is one of the film’s best gags, while Anna has The next right thing, a heartfelt, tear-jerking hymn to picking yourself up and soldiering on even when things seem utterly hopeless. 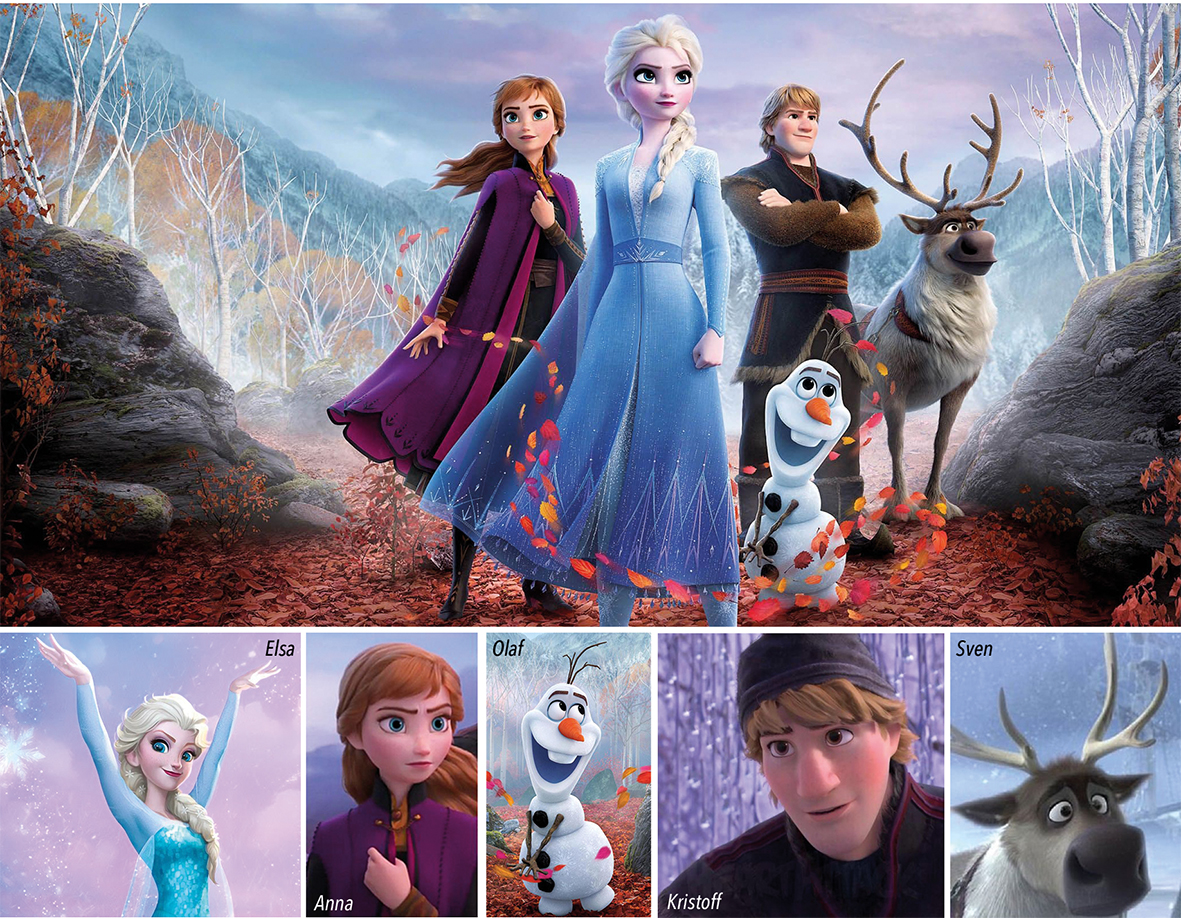 And things do get surprisingly dark in this film. It’s probably fair to say that no-one expected a sequel to Frozen to largely be about the legacy of colonialism and the crimes committed against indigenous peoples in the name of “civilization”, but here we are. There are some punches pulled particularly in regards, to an ending that while satisfying in its way, could have stood to be much bolder and would have been better for it. But flaws and all, it’s admirable that heavy but important thematic content like this is in a kids’ movie at all, and especially in light of how great and how sensitive Moana was, is an encouraging sign for the future of Disney animation.

For all that though, it’s still a cartoon primarily aimed at children (which is exactly as it should be), which means there’s plenty of time for silly jokes and slapstick. Happily, Olaf actually is as funny as the movie thinks he is this time around, and he’s responsible for many of the biggest laughs thanks to bizarre existential musings and a recap of the first film that’s probably the sequel’s funniest moment.

Only time will tell if Frozen 2 can repeat the success of the unstoppable cultural juggernaut that was the first film, but the kids that grew up on Anna and Elsa’s first adventure are unlikely to be disappointed. This is a grand, ambitious sequel that feels more like epic fantasy than the first one’s fairy-tale, and Disney honestly deserve a great deal of credit for taking their time over it when it would have been so easy to just cash in. It’s not perfect girl, to paraphrase Let It Go, but it’s an excellent film all the same.