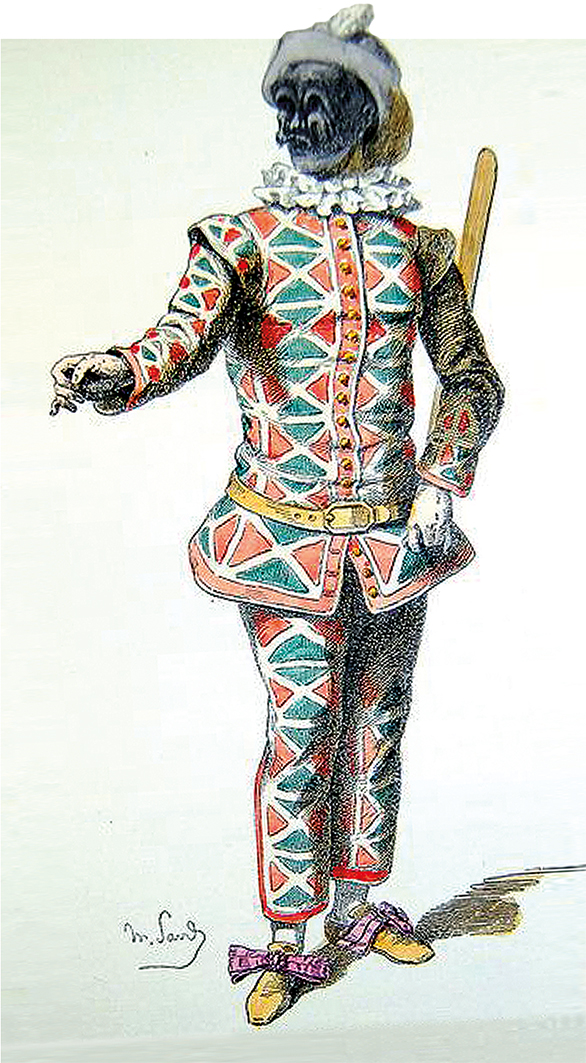 The classical appearance of the Harlequin character in the commedia dell’arte of the 1670s, complete with battle or ‘slapstick’, two thin slats of wood, which make a ‘slap’ when striking another actor

As this month’s magazine is the Christmas edition I thought we should look at the history of pantomime and why children and adults alike, enjoy this very British festive fun.

Pantomimes are usually based on well-known fairy tales. Included in the performance is slapstick comedy and dancing, with added songs for good measure. This year, the 107th annual pantomime at the Swansea Grand Theatre will be the return of Peter Pan, which was first performed here at Christmas 1997/98. Starring is Coronation Street’s Tristan Gemmill, (Robert Preston) who plays Captain Hook and Swansea’s own Kevin Johns as Mrs Smee.

I will return to Peter Pan at the end of the article.

The story of pantomime begins with the 16th century Italian tradition of Commedia dell’arte “comedy of the profession”. Performances took place outside in the Italian streets, with professional performers wearing masks. Roles for females were often performed by females, unlike today, and the audience would know the characters by their masks. The Compagnie or companies established troupes of actors, where each actor had a specific function or role, and would often welcome players with no acting skill or experience. This allowed actors to travel from place to place around Italy and even further afield.

During the period 1640 to 1660, Oliver Cromwell backed an Act of Parliament banning Christmas. The ban was brought about by the rise of the Puritans, Cromwell being one himself, believed there was no biblical evidence that Christmas actually fell on the 25th December, and that Christmas was a commercial and pagan holiday.

With the monarchy being restored after Cromwell’s death in 1660, characters from the Commedia dell’arte were becoming familiar in English pantomimes. These early pantomimes were often performed in silence. One of the characters to have emerged during this period was Harlequin, John Rich, performing under the name of “Lun”. It was during this period that the word “pantomime” was used. It wasn’t until 1843 that the restricted use of spoken word was lifted when The Theatres Act of 1843 was passed.

The first mention of Harlequin in Swansea was in 1809, published in The Cambrian, on 11 September, for an advert for the Benefit of Miss Cherry, and a pantomime called Lilliputian Revels.

The star of the 18th century pantomime was still Harlequin, the quick-witted miscreant, who wore a mask and had a chequered costume and performed in silence. Also popular was the clown, whose image changed from the stupid to the white-faced and pie-crust frill and baggy trouser clown. One well known clown performer was Joseph Grimaldi, who performed during the early 19th century.

During the 1830s, theatregoers expected more exciting and thrilling scenarios, although it was during this period that audiences declined. Pantomimes fought to stay alive, as audiences expected elaborate scenery and stage effects. 1843 was the swan-song for the ever so quiet Harlequin, as pantomimes after then were written with witty-puns and audience participation. They were based on fairy-tales and were described as being “traditional”. It is Grimaldi who pioneered the element of the cross-dressing pantomime dame, performed by men.

The pantomime dame is usually the hero’s mother, and here costume is often used for good comic effect. Dan Leno is one of the leading actors who is best re-membered for his role as a dame in annual pantomimes. Another element of the “traditional” pantomime and sadly very much in decline today, was the role of principal boy, usually played by a girl. Confused? Yes!

As we know this year’s pantomime is Peter Pan; the story of the free-spirited and mischievous young boy who could fly and never grows up. What at life! The Scottish novelist, J. M. Barrie, who wrote this story was godfather to Peter Scott, son of Captain Scott the explorer, who was named after Peter Pan.