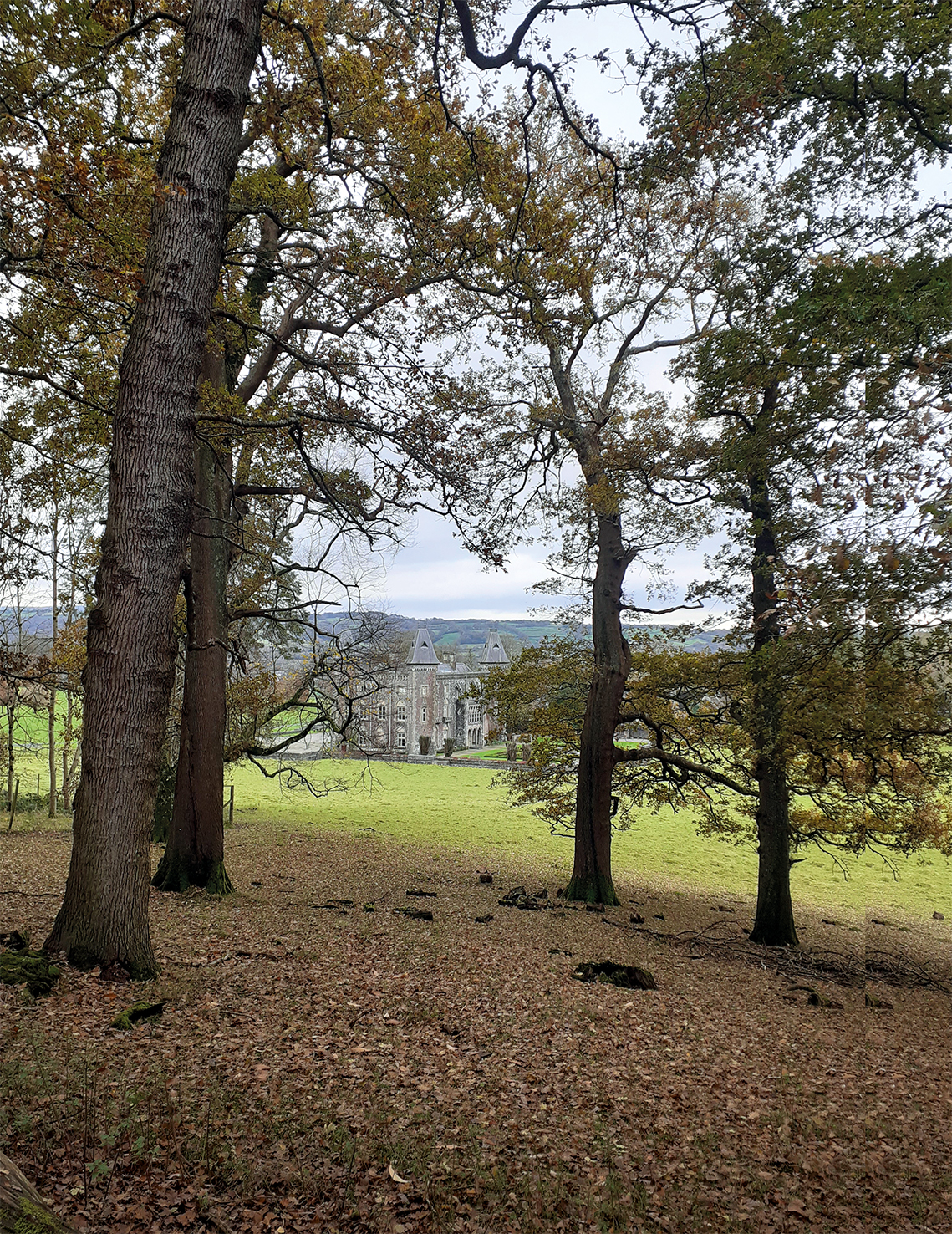 Appearing through the woodlands, a glimpse of Newton House on the Dinefwr estate

This walk is perfect for combining a day out with a spot of Christmas shopping. Llandeilo is only about 45 minutes from Swansea or as Ian suggests, let the train take the strain, which takes just under an hour.

When deciding on a nice festive walk, certain criteria had to be met. Preferably a nice gentle undemanding stroll, not too remote or far away from Swansea, and centred around a quaint little country town with welcoming pubs and eateries all designed to give us that Christmassy, cwtchy feeling. And one place which ticked all the boxes was Llandeilo. It’s only about 45 minutes away and also conveniently reachable by train if you fancy leaving the car at home and have a few festive drinks. Hell, it’s even got a Goose Island!

You can also do a bit of Xmas shopping in the upmarket designer shops where amongst a wide range of gifts you can buy wacky cushions and the like, with slogans such as, ‘One prosecco, two prosecco, three prosecco floor’ or ‘Anyone can cuddle, but only the Welsh 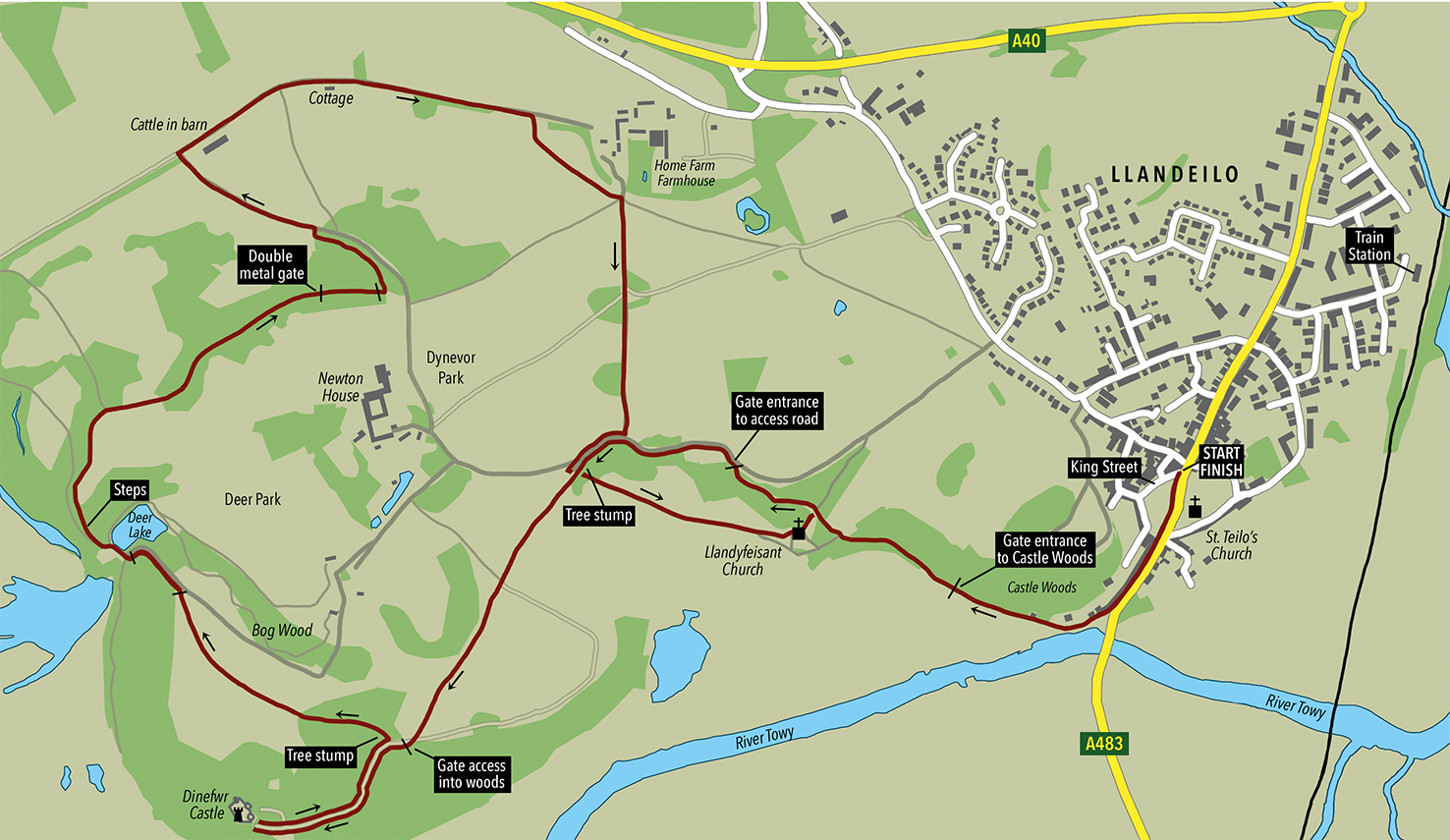 can Cwtch’. But there’s one saying that really puzzles and troubles me – ‘I love you to the moon and back’. Now, in the scheme of things, whilst the sentiment is obviously well intentioned, when you’ve got the entire universe and indeed infinity to draw a comparison with, well the moon isn’t very far away is it? It’s no further than the bottom of a very small garden. Surely, it would carry more meaning and indeed be far funnier if you expressed the measurement of your love by saying ‘I love you to Uranus and back’. Just a thought.

So the walk will predominantly centre on the historic Dinefwr estate, taking in a medieval Castle, ancient woodlands, a deer park, a picturesque lake, parkland designed by Capability Brown (yes, that Capability Brown, the Alan Titchmarsh of his day), a herd of White Park cattle, a herd of deer and a miniature Downton Abbey looking country pile. Not to mention, of course, the fauna and flora contributing to it being a Site of Specific Scientific Interest. And all of this crammed in a walk of no more than 5 miles and only 20 minutes from Leekes!! I think you’ll agree, you’re being thoroughly spoilt. Well, it is Christmas after all. So, enough chatter, let’s get cracking

Starting in the town centre on King Street and with the church to your left walk down the hill turning right just before the bridge and enter Castle Woods. With the River Towy to your left, the path winds its way through this ancient woodland eventually emerging onto a tarmac road which is the main access to the feature building of the Dinefwr estate, Newton House and from where you’ll get your first glimpse of this impressive residence.

It sits in an 800 acre estate which itself dates back to the 15th Century and was the ancestral home of the Rhys/Rice family. The house was originally built in the 17th Century but substantially altered in the 19th to give it today’s Gothic look. The estate has had a chequered history, including when the house was taken over by a bunch of hairy squatters who used floor joists as firewood, until it was divided up in the 70s and sold to various interests including the National Trust, the Wildlife Trust South & West Wales, and a number of private owners. So today, it provides a great family day out with a wide range of activities. (You’ve just missed the Christmas Fair I’m afraid as it took place at the end of November). 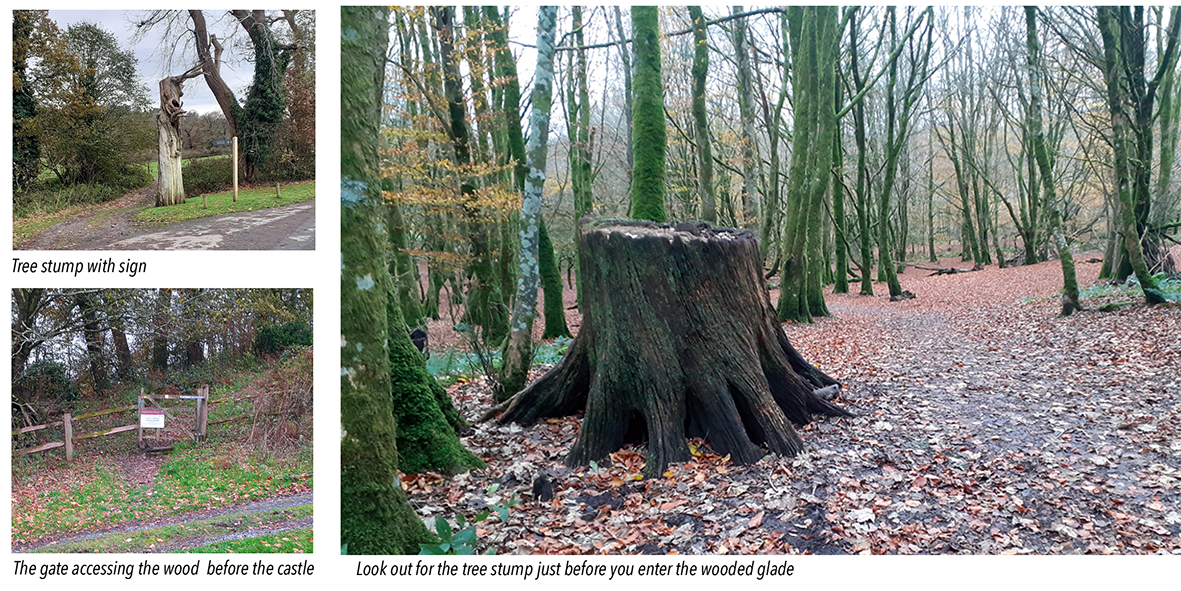 Back to the walk. After a short distance, you’ll see a tree stump with a sign directing you left towards the castle. You’ll enter a field and head diagonally across it although the path actually takes you to the left then swings around right. Look out for a gate accessing the wood and follow the path until you come to a T junction, where you turn left heading towards Dinefwr Castle. 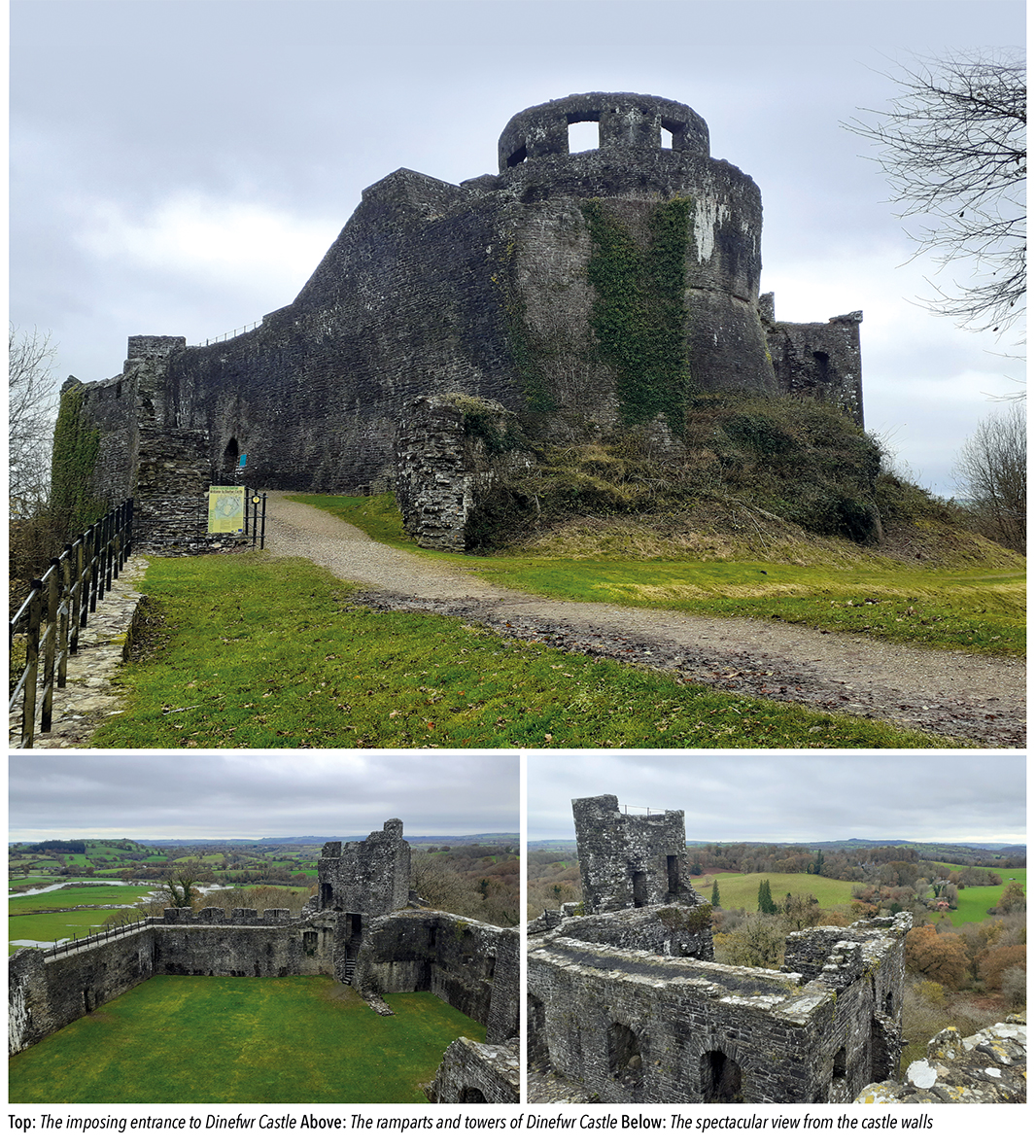 This reasonably well-preserved castle dates back to medieval times and sits confidently on a rocky promontory overlooking the Towy valley which gives it a perfect defensive position as if it’s saying to any potential attacker, come and have a go if you think you’re hard enough. The views are quite spectacular. To the west you can pick out the folly of Paxton’s Tower, which overlooks the lush Towy valley as the river meanders its way along and to the north, the western edge of the Brecon Beacons towards Llandovery. It’s definitely worth having a little mooch around the castle to explore the ramparts and towers but be careful as the flagstones can get slippery and watch your head on the low doorways and narrow staircases.

Leaving the castle, retrace your steps along the path, past the point where you joined it and a little further on look out for a tree stump on your left and turn left here entering a delightful wooded glade. When I was there it was carpeted with a glorious covering of bronzed and golden leaves set off beautifully by the contrasting greens and browns of the moss-covered tree trunks. There’s a faint path to follow but you exit the wood in roughly the bottom corner.

Through the gate and into an open field, where you’ll be met by a welcoming sign advising that you’re entering Dinefwr Park where there’ll be admission charges. I’ll be honest and say that there was no obvious point at which payment could be collected but take some change in case.

Ignoring the path to your right, go sort of straight on and down the hill where you’ll see the exit gate in the trees ahead. Next up you’ll come to Deer Lake, a picturesque body of water which served as a mill pond back in the day. It really is a beautiful sight in autumn. Over the dam and through the steel gate, turn immediate left. Then there’ll be a choice of paths so take the one to the right which ascends up a series of steps. It’ll soon become obvious that you’re on some sort of nature trail as there’s wood carvings of all sorts of beasts along here.

The view to your right will suddenly open up and then you’ll have quite a stunning view of the house, framed like a picture between the trees (see pic at the start of this feature). I have since discovered that this is part of the Capability Brown Walk and it was he who fashioned this vista. I should have guessed. Titchmarsh, eat your heart out.

Carrying on, you’ll come to a weird looking double metal gate set-up, which reminded me of airport security and once through turn immediate left after the next gate 50 yards or so ahead. You’re heading in a generally north westerly direction and the landscape now opens out in front of you towards Brechfa. You are on a track which is leading you out of the park and after the next gate turn right onto a road past a barn where the White Park cattle might be having their lunch. Be aware of farm vehicles along this stretch. After passing a cottage on the right, farm buildings will come into view ahead but keep an eye out for a signpost just before them directing you to the right and into a field. You then realise that you’ve pretty much done a loop around Newton House as it now re-appears on your right. Ignore entry into the park on your right and instead go left through a gate at the bottom of the slope and then immediately right along a track. Carry straight on until you return to the access road to the house which you walked along at the start. Turn right along the road and then left at the tree trunk as before. After 100 yards or so, look out for a faint descending path to your left, which leads you into a meadow bearing left and towards a church in the trees ahead. 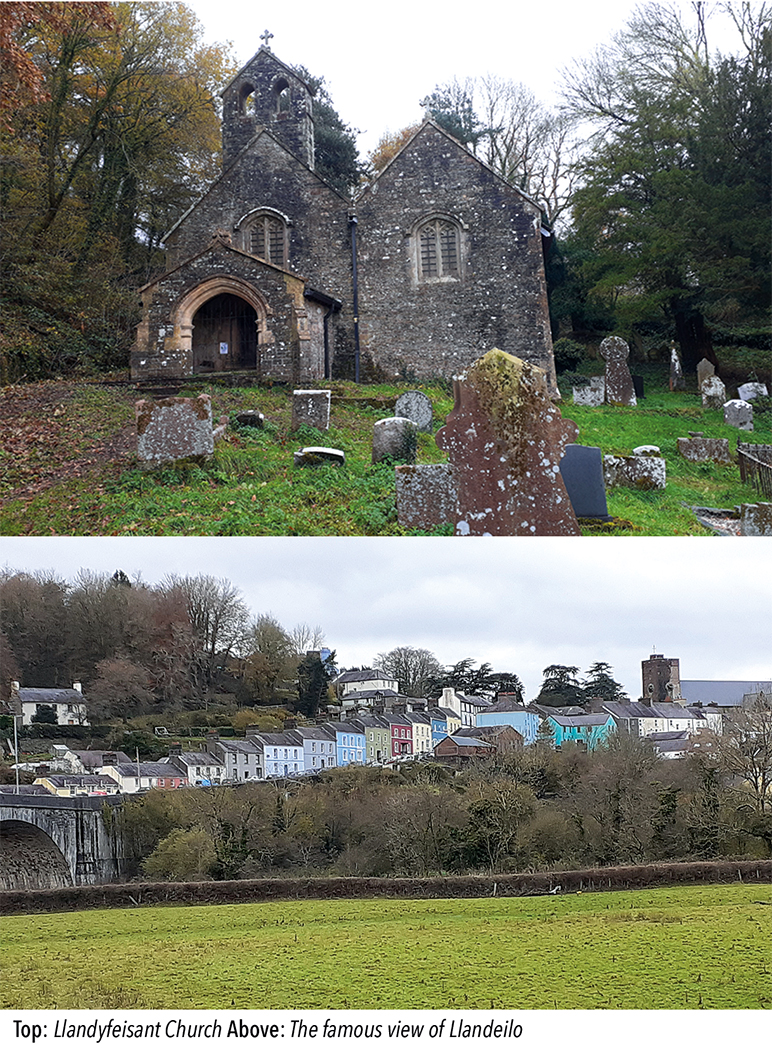 Llandyfeisant church strikes a very sad and forlorn figure these days, although it’s had a varied history. It was last used as a place of worship in 1961, and more recently as a visitor centre which closed back in the 80s. Sadly and rather inevitably I suppose it’s been left to slowly deteriorate to the extent that it seems to have morphed into its surroundings. If you’re looking for a location to get seriously spooked out, then come here after dark. However, encouragingly, there is a campaign to raise funds to help preserve this fascinating part of local history. (If anyone is interested in donating to this worthwhile cause, please visit friendsofllandyfeisantchurch.org). Look out for the path behind the church emerging into Castle Wood, turning right and to return to the start. There you go, a thoroughly satisfying and re-warding walk with plenty of energy left to enjoy what delightful Llandeilo has to offer.

Anyway, I hope you all have a very Merry Christmas.

Bert Jansch In the Bleak Midwinter

The Pogues and Kirsty Macoll Fairytale of New York