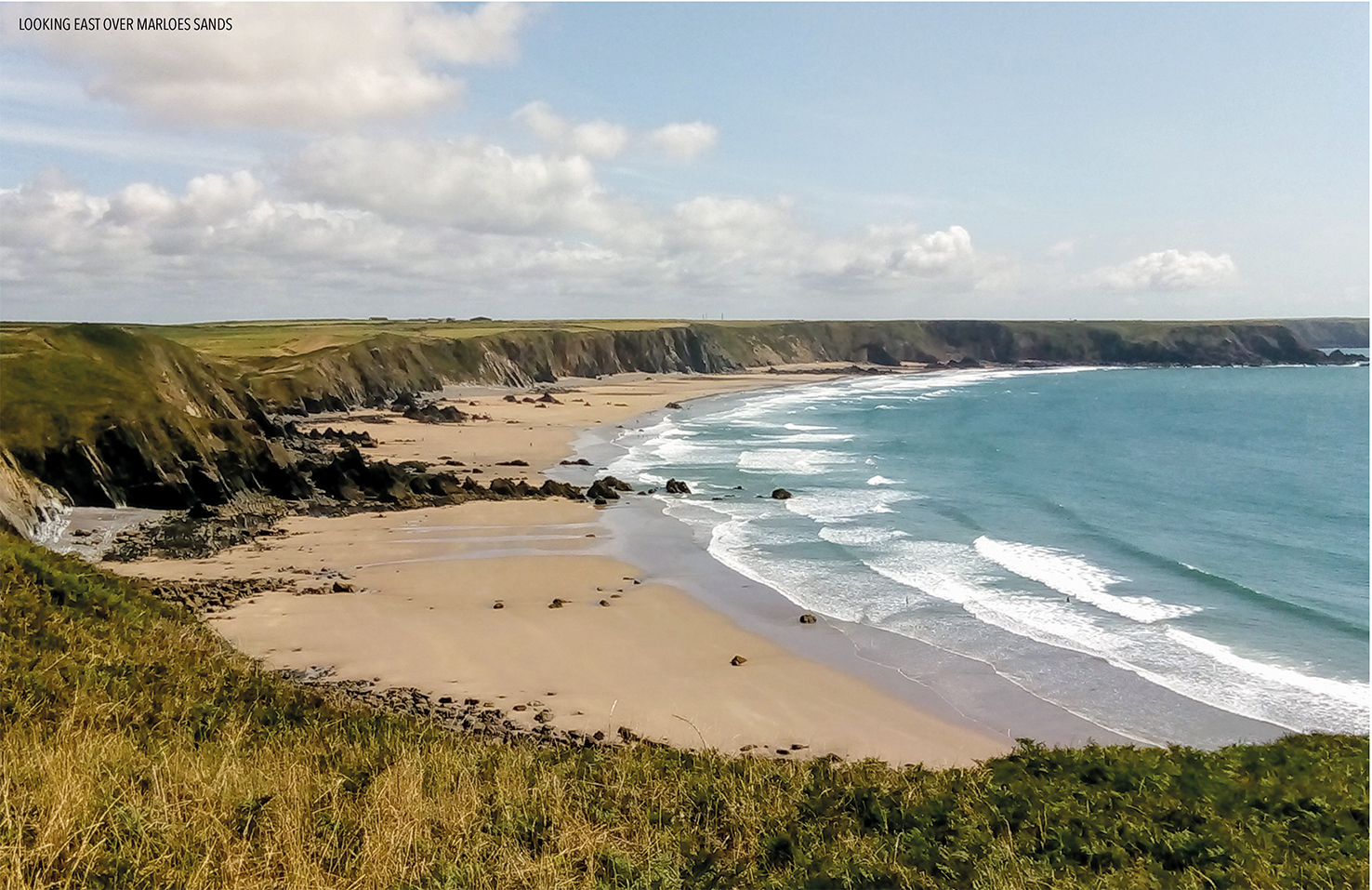 This month Liz Barry takes a stroll around part of the Wales Coastal Path, taking in a section in Pembrokeshire where she discovers a dramatic landscape.

Sometimes we can be so captivated by the beauty of Gower that it becomes hard to drag yourself away and explore other coastlines. Wales is the only country in the world with a continuous coastal path, so that alone is a good reason to venture further afield. The Wales Coast Path launched in 2012 consists of 870 miles of breathtakingly beautiful, wild, dramatic views along our country’s entire coast. Hands up, I didn’t walk it all, though I can truthfully say I did leave a few footprints behind, as well as spending time wander-ing through the coastal towns, browsing galleries and shops then indulging in an ice cream or two.

Pembrokeshire Coast National Park was established in 1952, it is the UK’s only National Park that is completely coastal, and it stretches for 186 miles. Rugged limestone cliffs drop down to craggy shores, secluded bays, golden sands and small harbours, it’s a haven for birds, wildlife and seal spotting. It’s also a playground for water sports enthusiasts and a place where food lovers can savour delicious fresh sea food.

With the warmth of summer sun on my back, I first glimpsed Marloes Sands, a vast expanse of golden beach, nudged by Albion Sands where at low tide traces of a wrecked ship emerge from its resting place. It’s a land-scape sought out by Hollywood location scouts as scenes from the film Snow White and the Huntsman, starring Charlize Theron and Kristen Stewart, were shot here. 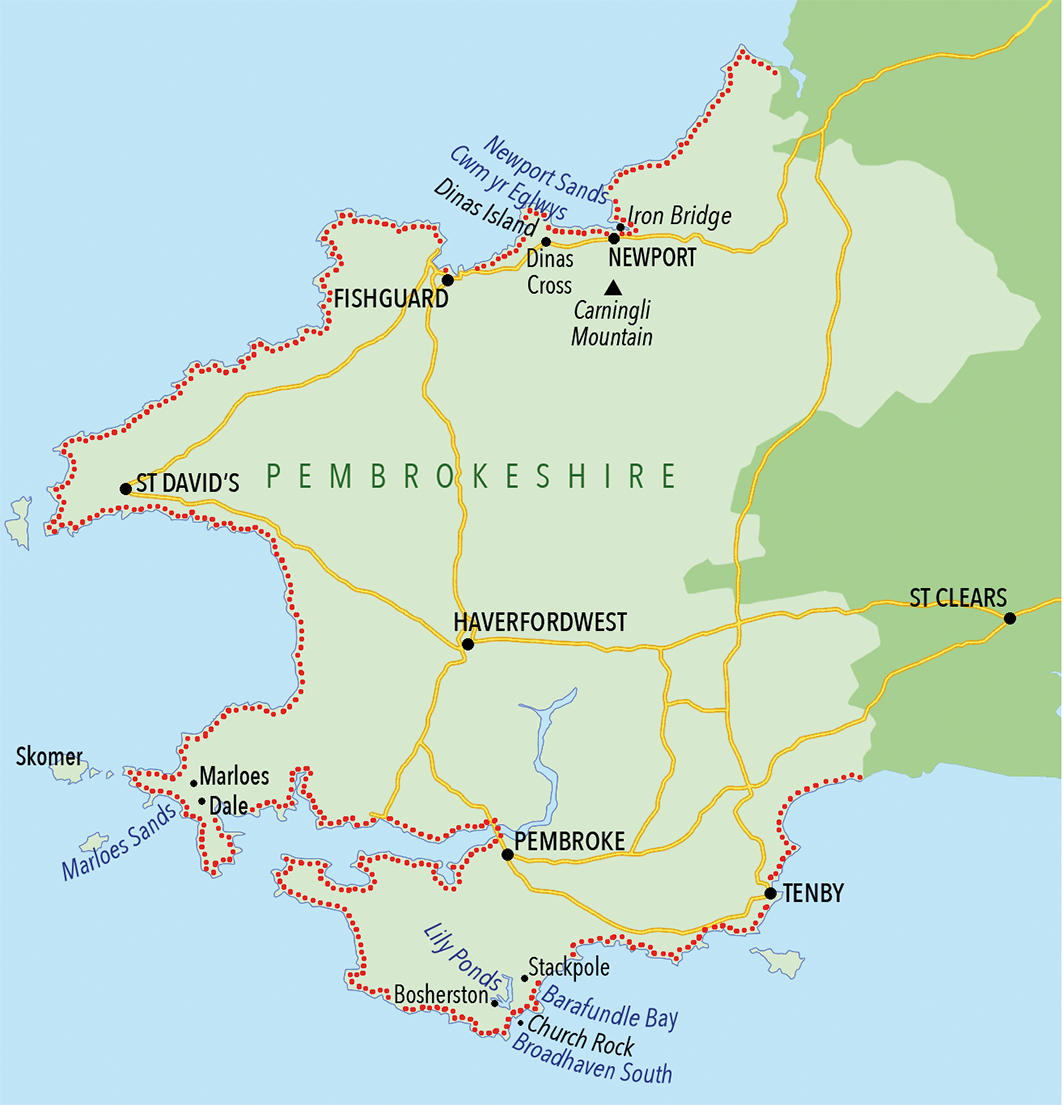 It is possible to walk from Marloes to Dale or you can drive through the country lanes. Dale is greatly enjoyed by those that love water sports; the sheltered wide bay makes it an ideal location for windsurfing, sailing and paddle boarding. The beach is mainly made up of pebbles sprinkled with sand, not too good for building sandcastles but a great place to sit and enjoy the scene.

Travel just over an hour north, to the mythical Carningli Mountain (The Mount of Angels) where ancient hut circles and stone cairns hold the secrets of forgotten civilisations, you are rewarded with a 360-degree view across Pembroke-shire to the little town of Newport. Here several galleries, gift shops, restaurants and old-world pubs stand side by side along the narrow streets. A walk past flower decked stone cottages leads out to the Parrog, a small port where a lime kiln stands on the original quay. From the slipway, canoers and kayakers have direct access into the sea, where they can paddle to secluded beaches at the base of coastal cliffs edged by the bay. 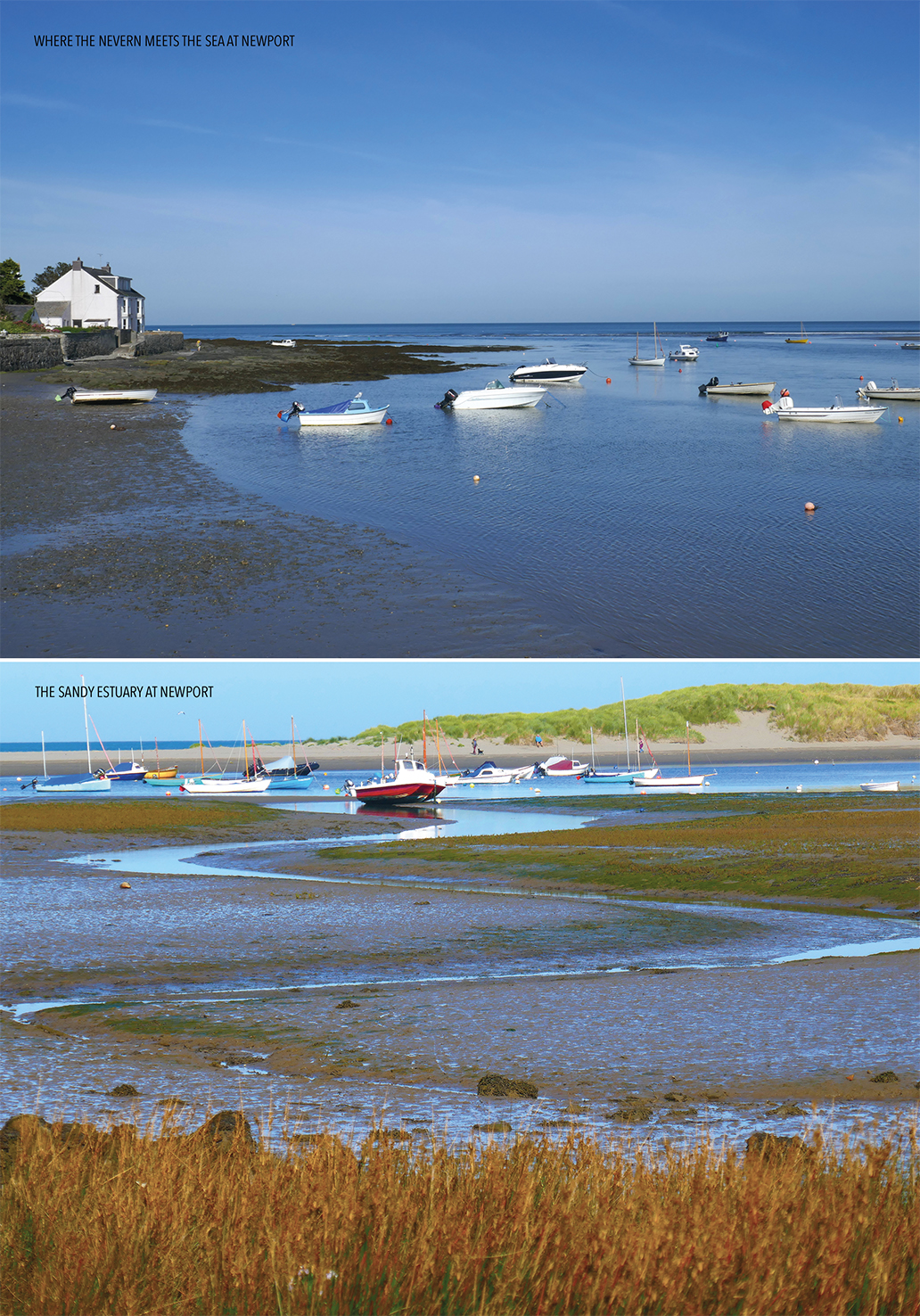 Sitting on the seawall in the evening is the perfect place to watch the sky turn golden and the sun sink on its nightly descent into the sea.

Newport Sands known locally as Traeth Mawr, translates to Big Beach and has almost a mile of flat sands, easily seen from the Parrog, and is reached by a short car drive. The beach spreads out beneath the Newport Golf Course, a car park sits above, and unusually there is vehicular access and you can park along the stretch of beach beneath the dunes. It is a flat beach, lovely for swimming and at the far end great rock pools to explore.

Driving between the two you go across The Iron Bridge over the Nevern River which journeys down from the Preseli Hills winding its way through ancient woodland, passing Bronze and Iron Age forts. Cars are always parked along the road, as it’s a known spot for bird watching. The Nevern meanders over mud flats before flowing into the sea, creating a small sandy estuary. 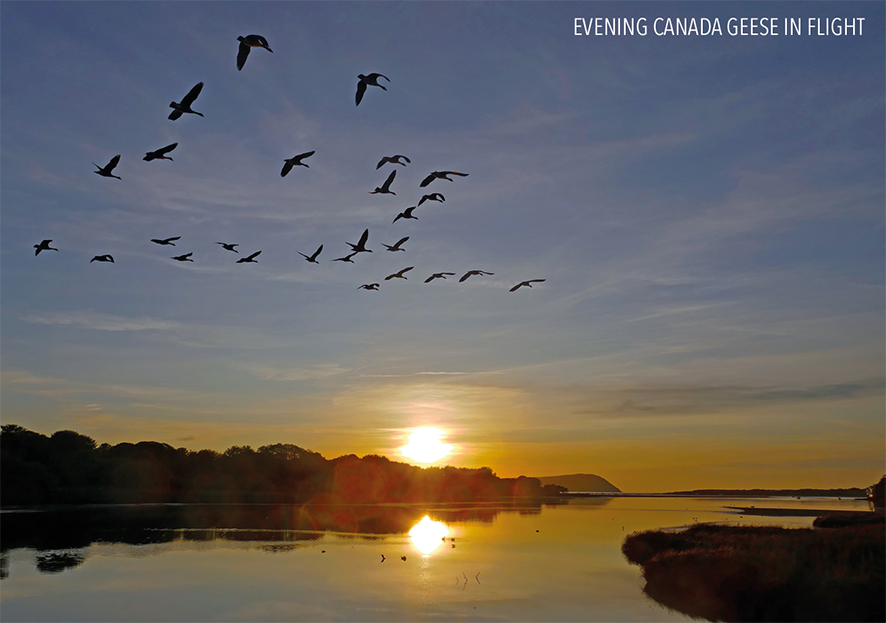 Often you will spot ducks, oyster catchers and egrets; the habitat of reed-beds lends itself to sighting kingfishers.

On the evening we parked up, the river banks were full of Canada geese; the air vibrating with honking as groups took flight in V-shaped formations.

Follow the coastal path from Newport and you come to Dinas Island, a picturesque hamlet in the community of Dinas Cross. Amidst a secret cove, overlooking Cwm yr Eglwys beach, stands the ruin of St Brynach

church. Facing out to sea the imposing rough grey stone facade of the church entrance and bell tower creates a haunting scene. The rest of the building was washed away by raging waters in 1859, a storm that created all of Pembrokeshire’s pebble banks.

A sea wall was built to protect what was left of the graveyard, where you can just make out the names of locals buried centuries ago, on the tilting gravestones.

Combining countryside and coast is the area around the National Trust’s Stackpole Estate. There is a car park at Bosherston Lily Ponds, from where you can walk around the ponds then join the coastal path. Three small valleys were flooded to create a series of lakes as a backdrop to the family house (no longer standing) on the Cawdor Estate.

Water lilies cover the surface of the ponds in early summer, the crisp white petals contrasting against the intense blue pond water creating a breath-taking display. Dragonflies hover. and ducks, swans and moorhens with their young in tow dash between the lily pads. Far more elusive are the resident otters, so this is a walk where you need to stop, take a moment, look, listen and enjoy the surrounding beauty and wildlife. 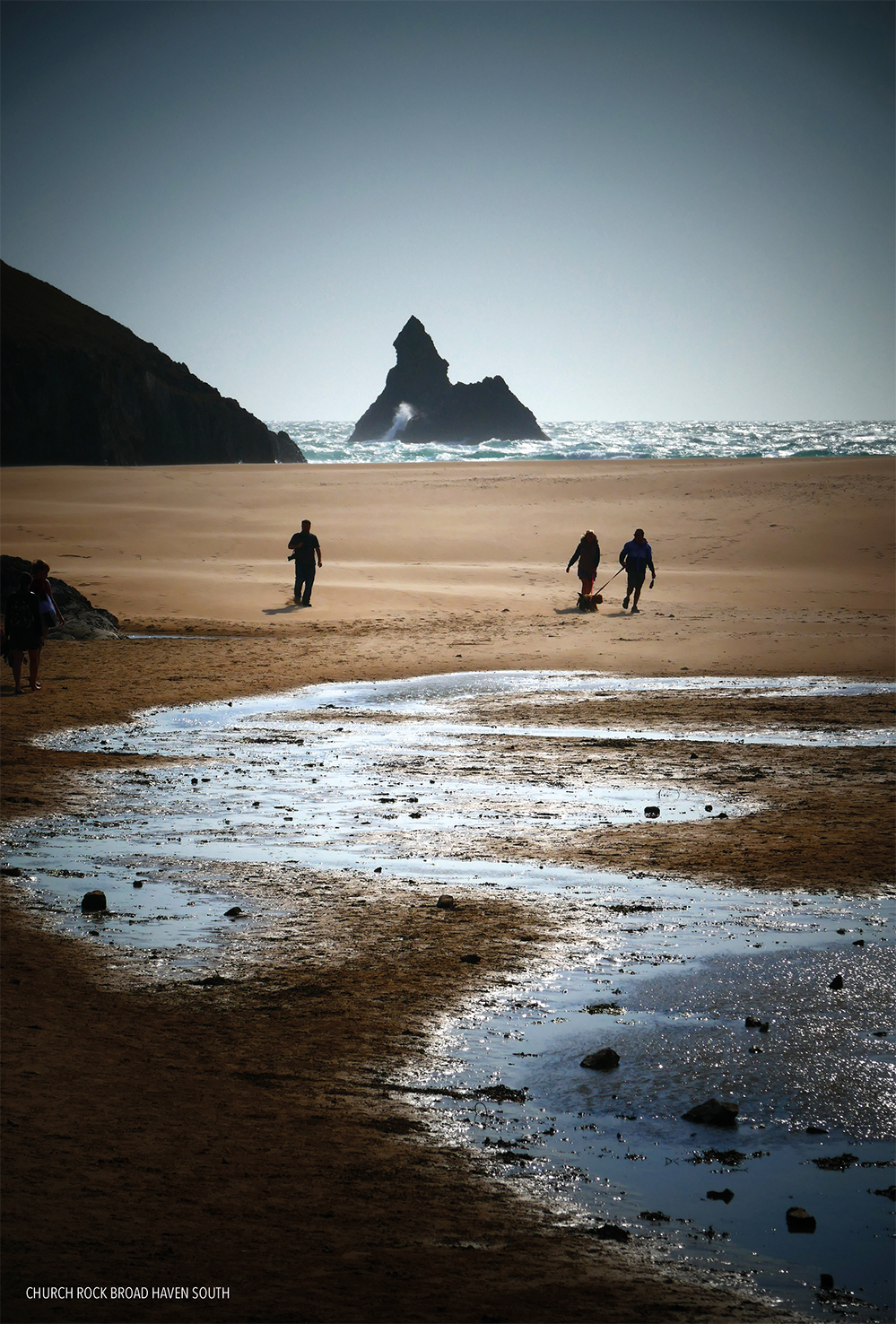 A shaded footpath beside the lakes leads down to the stunning beach of Broad Haven South. Backed by dunes and moorland, this wide stretch of golden sand, edged with jagged cliffs that have hidden caves that reveal themselves at low tide.

A prominent feature of the bay lies just off shore – the dark silhouette of Church Rock, appearing through the white spray of sea water, relentlessly pounded by crashing waves.

Paths lead around the cliff top or back through the estate to Stackpole Quay, a small harbour on a stony beach, there is a lovely café here and car parking. Following the path, then a little climb up some steps brings you above the cliffs, the vista opens, and another hidden Pembrokeshire gem comes into view, Barafundle Bay. A crescent shaped beach, backed by a pine forest, pale soft sand and crystal-clear water ideal for swimming makes this a place loved by families. So, it comes as no surprise that it has been voted one of the best beaches in Britain. There are no facilities here, so you have to carry anything you want in with you and 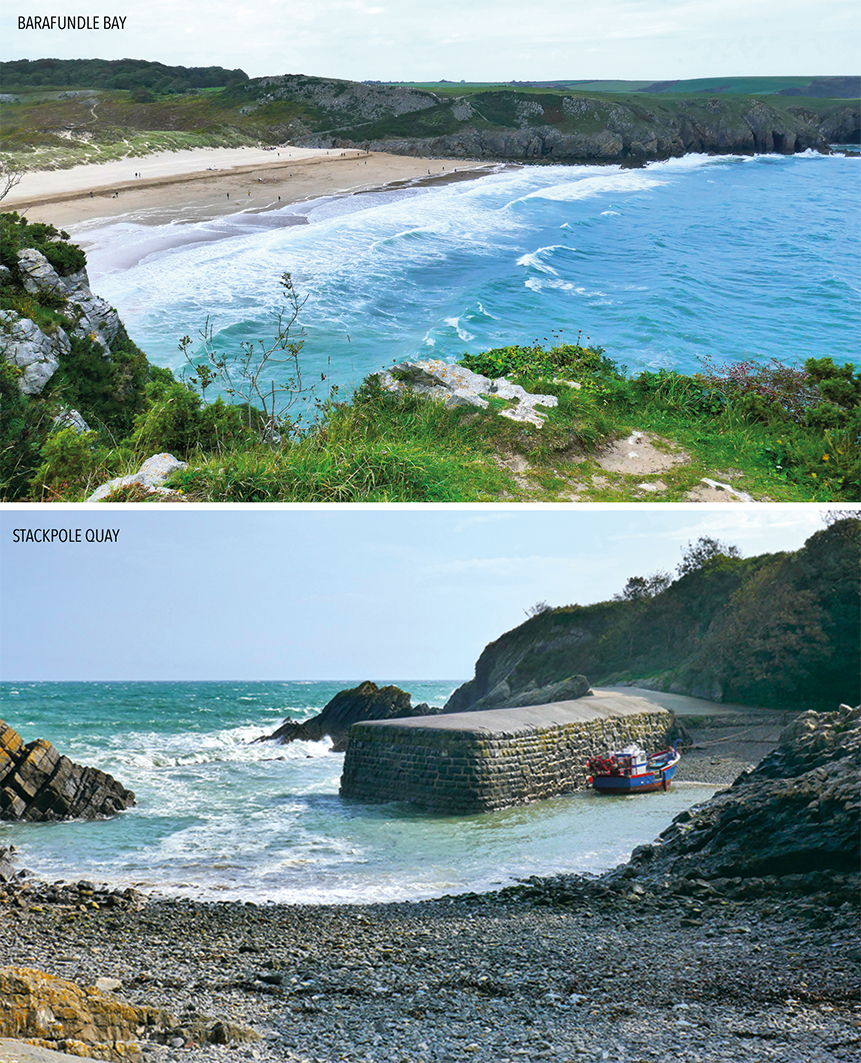 back out again, (Stackpole Quay car park is half a mile away) that is why it remains so pristine, and an idyllic place to spend a day.

The Wales Coast Path begins on the Dee Estuary and traces the North Wales Coast passing the Great Orme and Conwy Castle it runs along the Menai Straight and circles the Isle of Anglesey. It continues past Caernarfon Castle around the Llyn Peninsula with Bardsey Island at its tip. From Porthmadog, the Wales coast path continues south along the coastal fringe of the Snowdonia National Park on through Ceredigion and the long sweep of Cardigan Bay. It then rounds Pembrokeshire and on through Carmarthenshire then the path circles the Gower Peninsula into Swansea Bay. Along the Glamorgan Heritage Coast the path runs to Cardiff, down the Severn Estuary towards Chepstow on the Welsh-English border.