Winter time brings a heap of different birds returning to the UK to spend their time in a slightly warmer climate – looking for food, they often bring their families and young in-tow. Sometimes we see a surge in garden birds with siskins returning to our feeders and additional thrushes with Scandinavian blackbirds joining our resident birds. Redwing and fieldfares also visit from Scandinavian countries to spend their winters looking for berries and apples. But there’s so much more to see each winter. 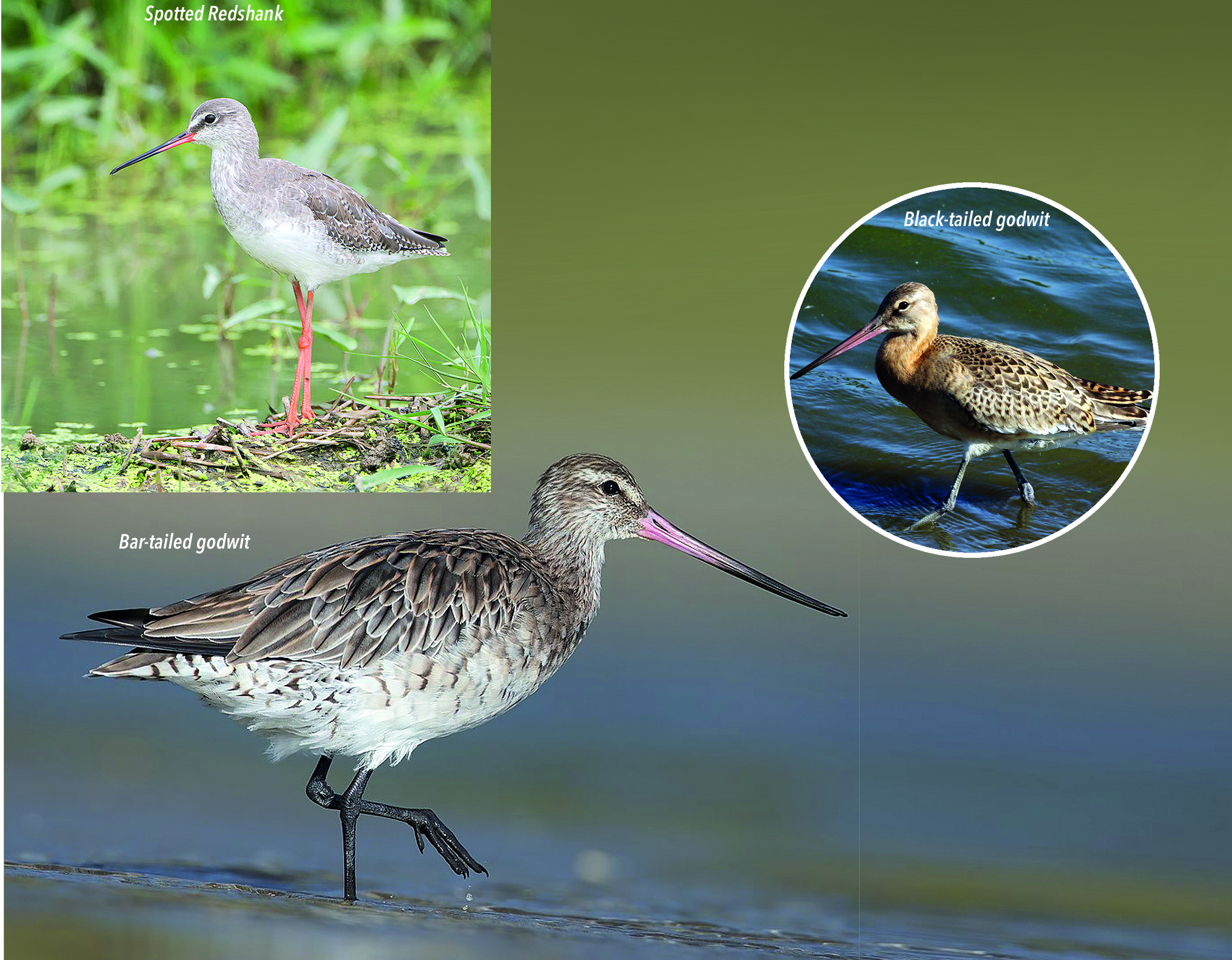 Large flocks of waders build up during the winter months, instead of seeing small pockets of birds in different areas, we see large flocks with a mixture of species merging together in mixed flocks. The majority of species are those mentioned in the October edition with redshank and greenshank often mixing together, you may be lucky to see a spotted redshank too! These birds have barring along their sides and tails and a slightly darker colour on their back than the redshank. Ruff, ringed plover, curlew, knot, dunlin all return in numbers and 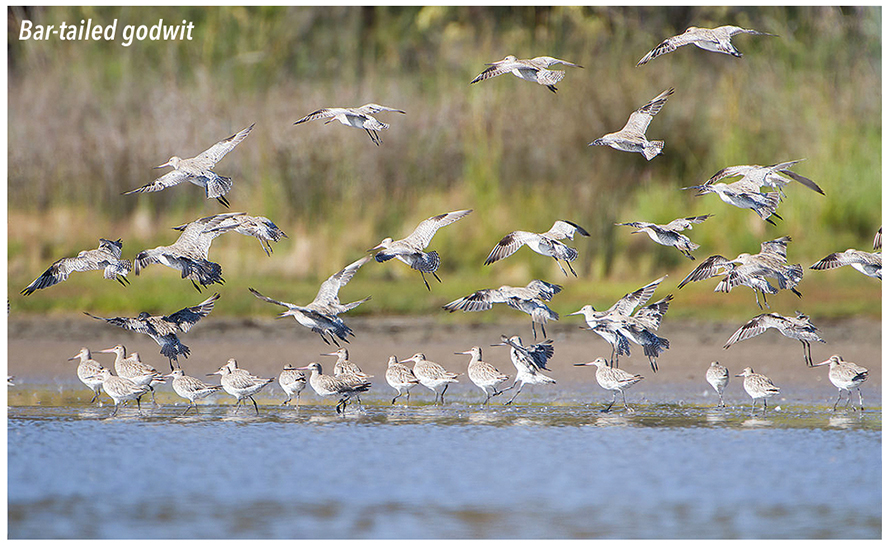 merge in with other species or gather in large numbers them-selves. There is nothing quite like waking up early and sitting on an estuary or coast and just listening to the fantastic sound surrounding you with a heap of different waders all calling at once! Another mix of species we see are black-tailed godwits and bar-tailed godwits, the latter being the one in smaller numbers and often the harder one to pick out of the flock. Often, it’s easier to look at their tails as bar-tailed have a barring along their tail as opposed to a large black segment, the beak is also different with bar-tailed having a slight upturn at the end of their bill. 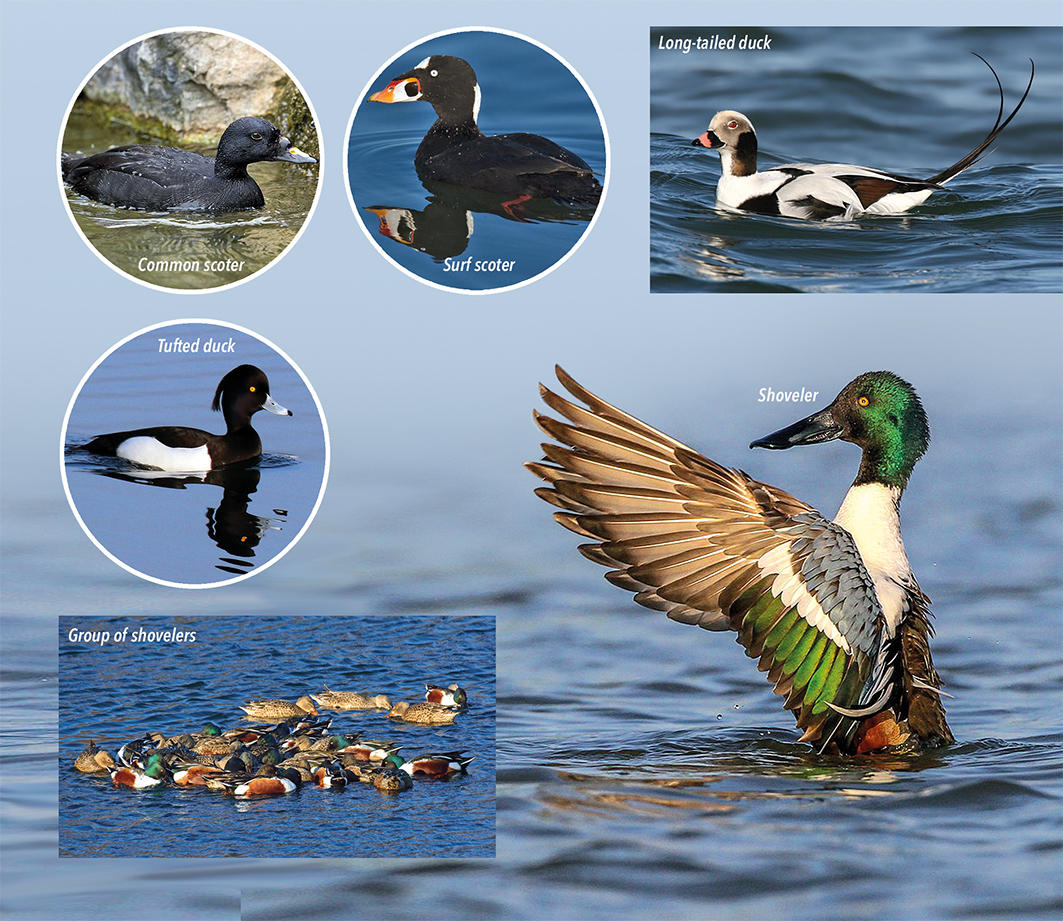 From the usual breeding birds, we see during the spring and summer months, there’s a surge in the number of duck species that arrive in the winter. Common scoter are often seen in large flocks around the UK with Rhossili being a great place to see thousands of these birds rafting on the sea – you may be lucky to see some surprise species in the flock such as surf scoters, velvet scoters or even long-tailed ducks which are one of the most adorable looking ducks. A fantastic thing to witness during the winter is groups of shoveler forming a large circle all turning in unison to feed! But aside from the species mentioned, we can see vagrant species such as greater scaup, lesser scaup and ring-necked ducks, these species are difficult ones to pull out of a flock of tufted ducks, particularly the females of the species but the drakes (the male ducks) are gorgeous birds each with a different bill and back pattern. 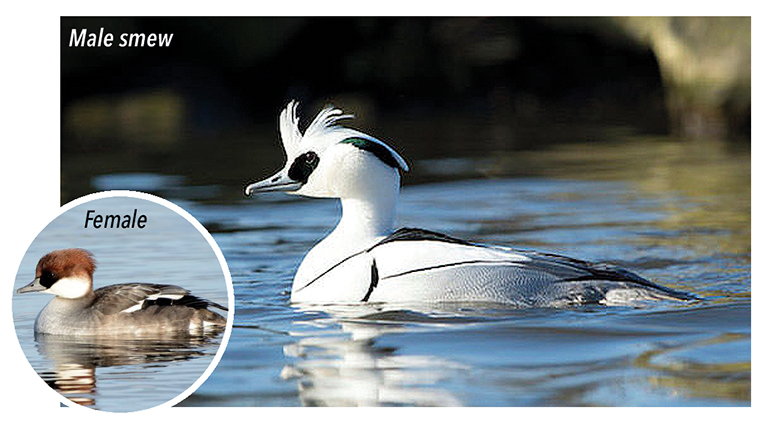 Finally, voted one of the best duck species, the humble smew – the females, known as redheads, are easy to pick out of duck flocks as these birds are sawbills meaning they look completely different from any other duck and resemble a small red-breasted merganser although the males are a gorgeous white colour with a large quiff of hair – very easy to spot! 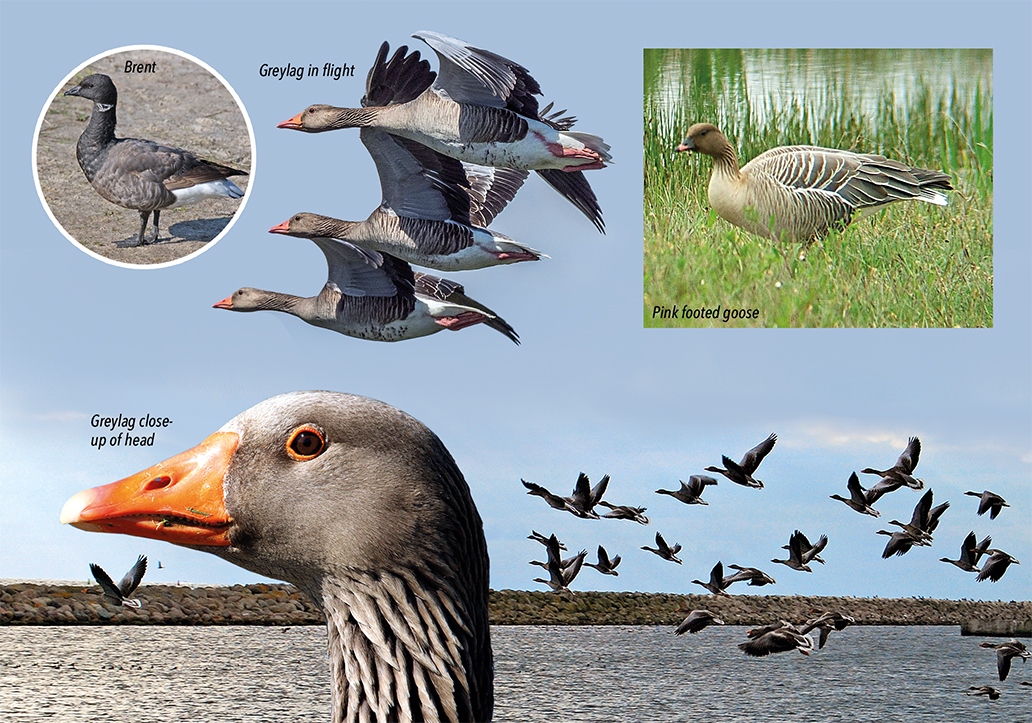 It’s not just ducks we see in large numbers across our coasts during the winter months, geese are another group of birds that return to the UK to seek food, bringing their families in tow. The most common species we see in Swansea is the dark-bellied Brent goose, around Whiteford and Gower – we can see groups of 50+ of these birds filled full of character! Alongside the usual greylags and Canada geese, we will also see Eurasian white-fronted geese, they look a little bit similar to greylags but are smaller and have barring on the belly and a little white piece on the base of the bill. We occasionally get a similar species with Greenland white-fronted geese, the latter has a slightly different belly pattern and often a darker orange colour on the bill and legs. Finally, another early morning start will let you see another species – skeins of pink-footed geese! Often you don’t quite get to see this species, instead you see triangles of geese flying ahead usually honking. Geese fly in V formations to save energy on long flights, with each bird taking its turn to fly at the front of the formation to keep up the speed of the group which uses a lot of energy.