The club welcomes men and women to come and listen to entertaining and very often amusing talks on a variety of subjects, with discussions with the speaker afterwards.

The venue is the hall of Tycoch Community Church, Carnglas Road, Tycoch/Sketty and starts at 19.30 every Thursday. Tea and coffee are served afterwards. All are welcome to come along for a couple of hours of entertainment. It makes a change from watching the television! 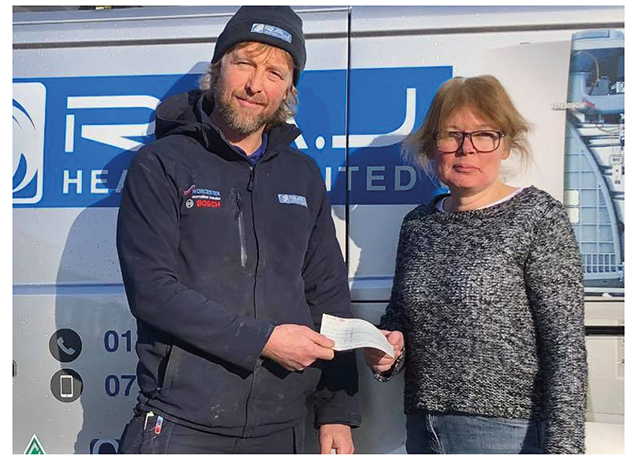 RAJ HEATING AND PLUMBING WINNER OF 2019

Robert Jamison of RAJ Plumbing and Heating was delighted to be able to give one of his customers of 2019 the grand sum of £2019 in his annualprize draw. Here you can see Mrs Workman (right) receiving her cheque from Rob.

Anyone getting a new Worcester Bosch boiler installed with RAJ in 2020 will be entered into the draw to win £2020.

Due to family commitments, one of our top deliverers has had to stand down and now Bay is looking for a replacement for the West Cross/Newton area. The candidate must have a car and be able to deliver 900 – 1000 magazines per month.

This will ideally suit someone who is retired or someone with school aged children. For further information please contact Lesley on 01792 290486. 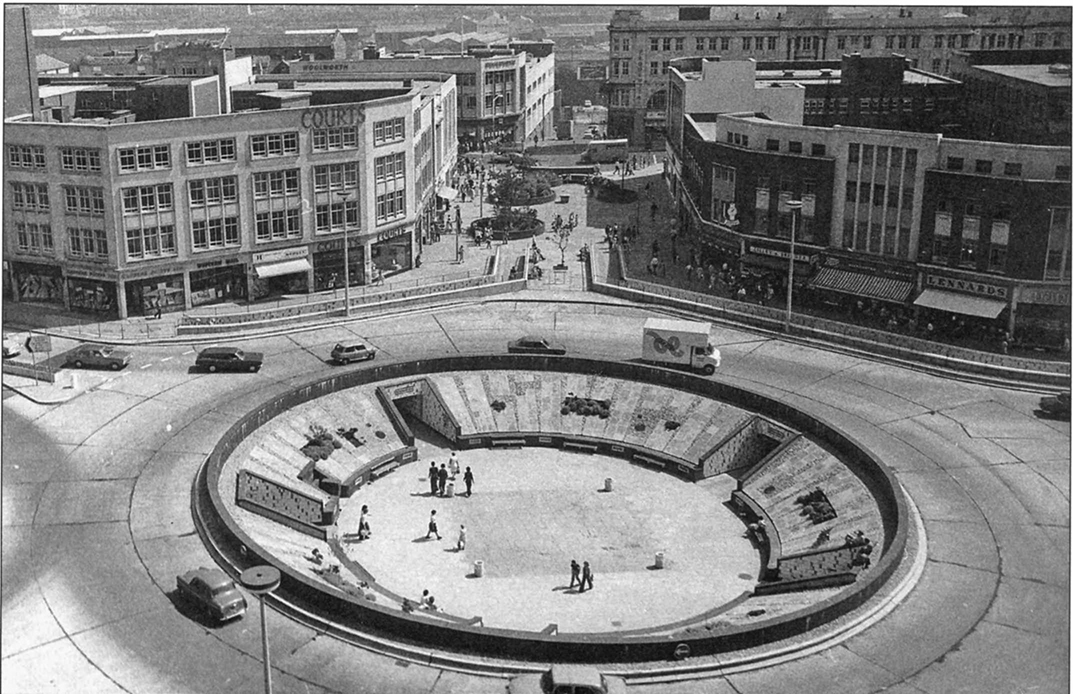 Swansea is undergoing yet another change, and whether you love it or hate it, it is here to stay. While many of our readers have welcomed the final reveal on the new Kingsway road plan, others would love to turn the clock back to the days when the scene in this photograph (above) would have met their eyes. This memory jerking image is one of more than 300 in the book, Swansea – Salute to a city, the latest by David Roberts. It captures many fantastic glimpses of Swansea in the past as well as offering candid shots of the social side of all our lives down the last half a century. For details on how to obtain a copy of a great gift which offers 50 years of city life in its 176 pages visit www.bryngoldbooks.com or phone 01639 643961. 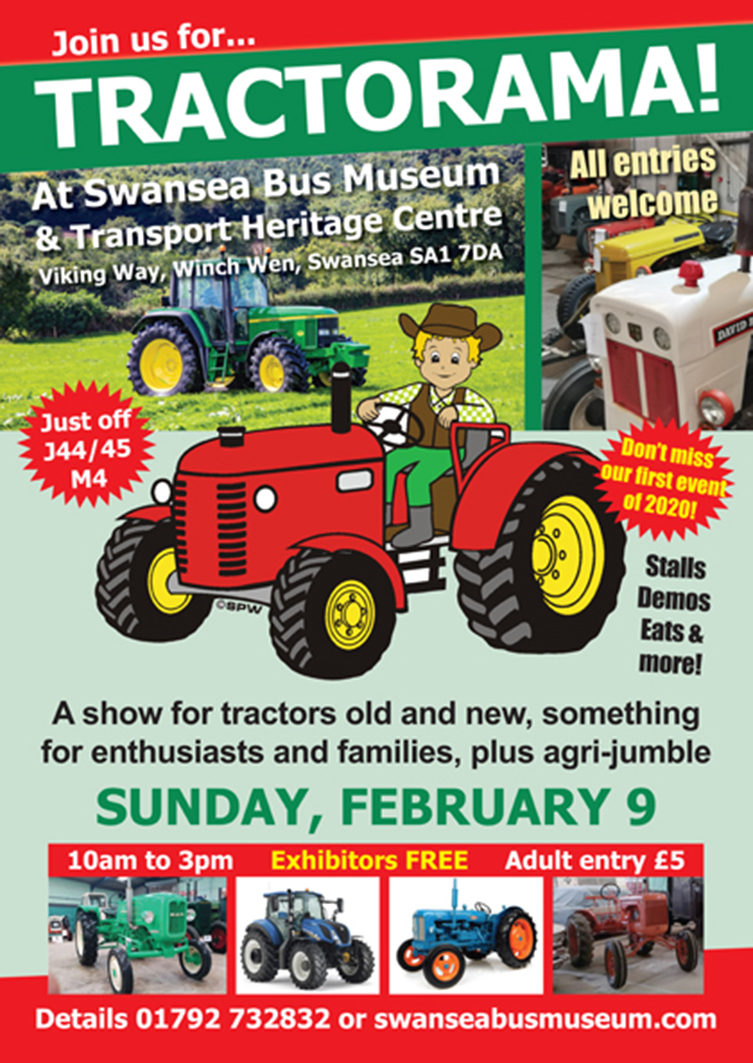 Join in the fun at the Swansea Bus Museum and Transport Heritage Centre in Viking Way, Winch Wen SA1 7DA on Sunday 9th February from 10.00 to 15.00.

This is a show for tractor enthusiasts old and new, with lots of stalls, demonstrations, food stalls, plus an agri-jumble. For further details visit www.swanseabusmuseum.com or call 01792 732832.

The Circle is delighted that the outstanding guitarist GARY RYAN will make a return visit to Sketty Park Community Centre, SA2 8HE (junction of Parkway and Heather Crescent) on Friday 20th March at 19.30. 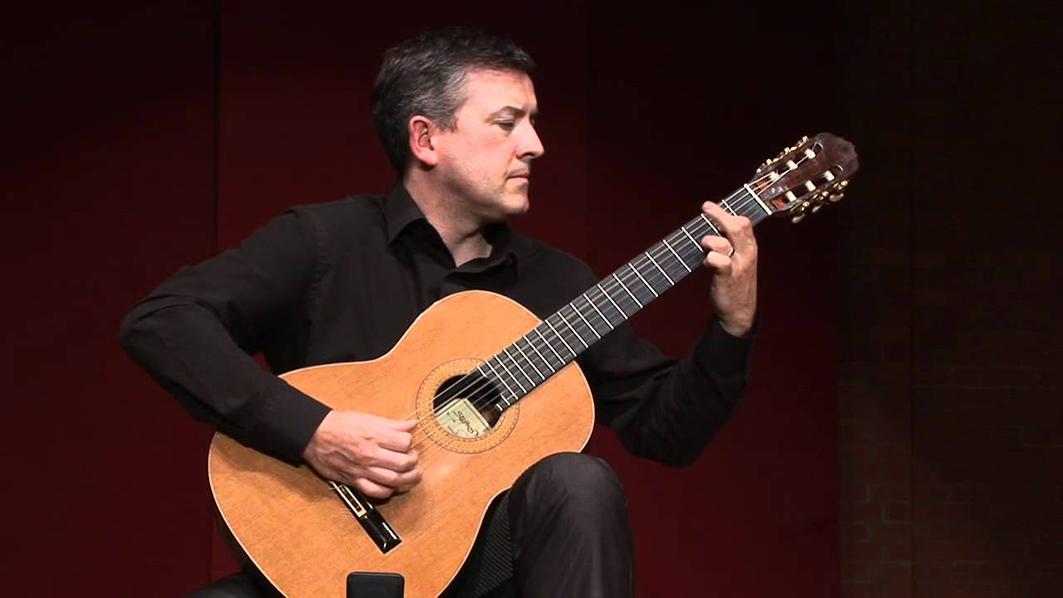 Gary has a reputation both as a virtuoso player and as a most engaging host at his recitals. He is also well known to radio listeners and as a member of the trio “Six Hands” (with John Williams and the jazz guitarist John Etheridge).

As well as being an outstanding exponent of classical music Gary has written numerous compositions in a range of other styles, with influences such as Latin America, Africa, jazz and various contemporary genres. These (like “Benga Beat”) are infectiously exhilarating. He has even performed as Neil Diamond at a “Tribute Night”!

The performance is being underwritten by Swansea City Council and by the Arts Council of Wales “Night Out” scheme. The Circle is most grateful for their support.

MARI LWYD A RATHER STRANGE TRADITION

At the beginning of the year, Bay photographer Liz Barry went down to the Heritage Centre in Park Mill to witness a performance of a rather fun tradition. We didn’t know much of its history but knew a man that did. The following is an extract from Mark Rees’ A to Z of Curious Wales published by The History Press. 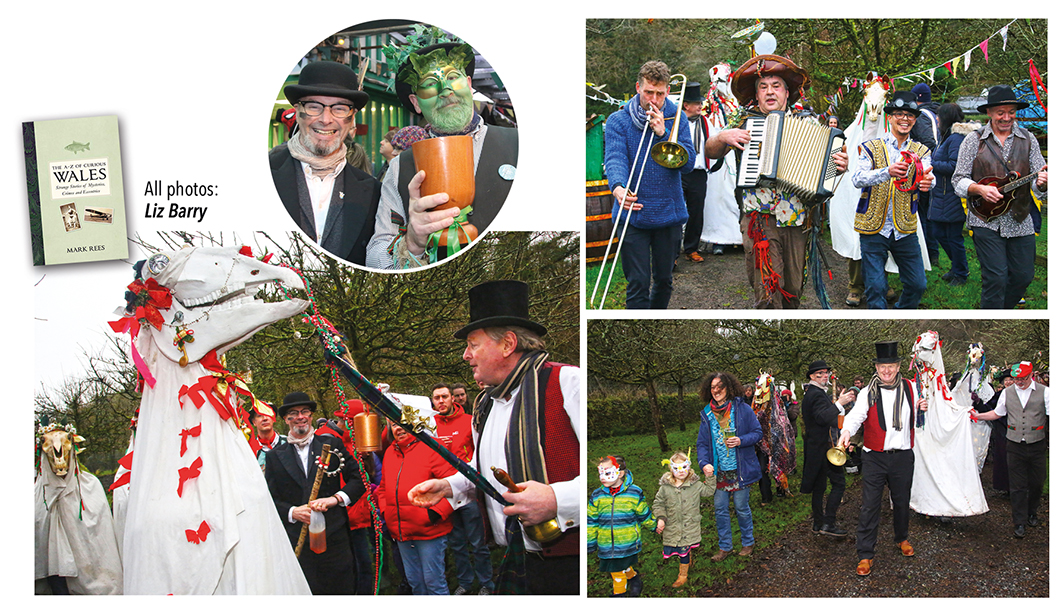 The Mari Lwyd is one of Wales’ more peculiar folk traditions. Once seen, never forgotten, the practice involves parading a horse’s skull around the com-munity at Christmastime for a game of rhyme and song. The wassailing custom traditionally takes place on New Year’s Eve and can be traced back to at least 1800, with some suggesting that it may have pre-Christian origins.

The Mari Lwyd itself is a hooded animal that, much like a hobby horse, is assembled by attaching the horse’s skull to the end of a pole, complete with a moveable jaw in some cases. It is adorned with ribbons and bells, and glass has been known to have been used as eyes.

Once assembled, it is held aloft by a carrier who is concealed under a white sheet or sackcloth, and then escorted by a gang of men as they travel from home to home. The group are directed by a leader, decked out in his Sunday best for the occasion, and brandishing some kind of implement to keep the Mari Lwyd in check, such as a stick or a whip. They are accompanied by musicians and characters in fancy dress, with Punch and Siwan (Judy) being popular choices.

After knocking on the door of a property, they would attempt to gain entry to the home through the use of pwngco, the name given to a playful battle of song in which a verse is sung by the visitors, and the occupiers attempt to repel them with a verse of their own. This is repeated until one side yields.

If successful in gaining entry, the Mari Lwyd would cause mischief in the house, chasing the girls and scaring the children, while the leader would do his best – or at least pretend – to keep it under control until they received their reward of food and drink.

While the tradition of disturbing neighbours in the early hours of the morning with a horse’s skull has since been consigned to the history books, there are still places in Wales where the Mari Lwyd is practised in a more respectable manner, and it is an increasingly popular part of organised events.

Those wishing to come face to face with the Mari Lwyd at Christmastime can visit the village of Llangynwyd, just south of Maesteg, which was a forerunner in reviving the custom at the Old House Inn at the end of each year. In Gower, the tradition is celebrated at the Gower Heritage Centre’s wassailing festival, and according to local tradition, the peninsula’s Mari Lwyd uses the same head each year, which is buried following the festivities to be dug up again twelve months later.

Meanwhile, on the English border, the annual Chepstow Wassail and Mari Lwyd event every January sees the people of Monmouthshire team up with their neighbours in Gloucestershire for a meeting of cultures on the town’s bridge where the two countries meet. 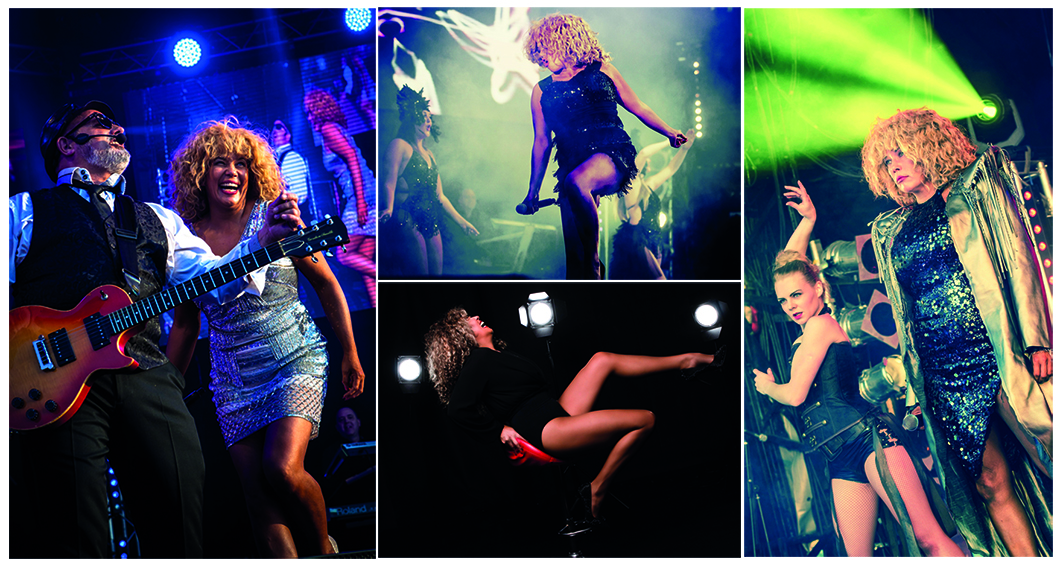 Shake a tail feather with the UK’s original, award-winning Tina Turner tribute …. aka Justine Riddoch and her talented cast.

When Tina burst onto the scene, she won the hearts of music fans from the outset, creating a fearsome reputation for her live performances – and those never-ending legs!

Early hits River Deep – Mountain High, Proud Mary and Nutbush City Limits were just a taste of what was to come. We Don’t Need Another Hero, Simply the Best, What’s Love Got to Do With It, I Don’t Wanna Lose You and When the Heartache is Over propelled her to stadium concert stardom.

Supported by her super-talented band and dazzling dancing girls in sequins, feathers and diamonds, Justine is the SUPREME Tina.

The cast and crew of Totally Tina are pulling out all the stops this year with the promise of a brand new, custom-made performance featuring a whole host of fresh ideas, coupled with the band’s now famous humour.

This year’s production is a heady mix of nostalgia and surprise with all the favourite Tina Turner hits, her best duets, much-loved covers and the odd twist in the tale.

Jumping Jack Flash, Honky Tonky Woman, Get Back, It’s Only Rock and Roll and The Bitch is Back have been added to a set which includes Simply The Best, Proud Mary, Nutbush City Limits and Private Dancer to name a few.

All the songs are enhanced by the customary flourish of sparkling stiletto heels, flamboyant tail feathers, high energy dance routines and musical genius. There’s plenty of audience engagement and post-show ‘meet and greets’ too, making the Show more personal.

In fact, it’s probably the closest thing to a live Tina Turner concert!