This month Charles looks at the history of the Mumbles Railway. This article was prompted by a discussion on the work of Archie Williams, late father of Simon, Bay designer. In 1976 Archie worked on a series of illustrations of the Mumbles Railway from its horse-drawn carriages to the distinctive trams of the 20th Century. We recently came across the original pen and ink drawings which you see reproduced here. 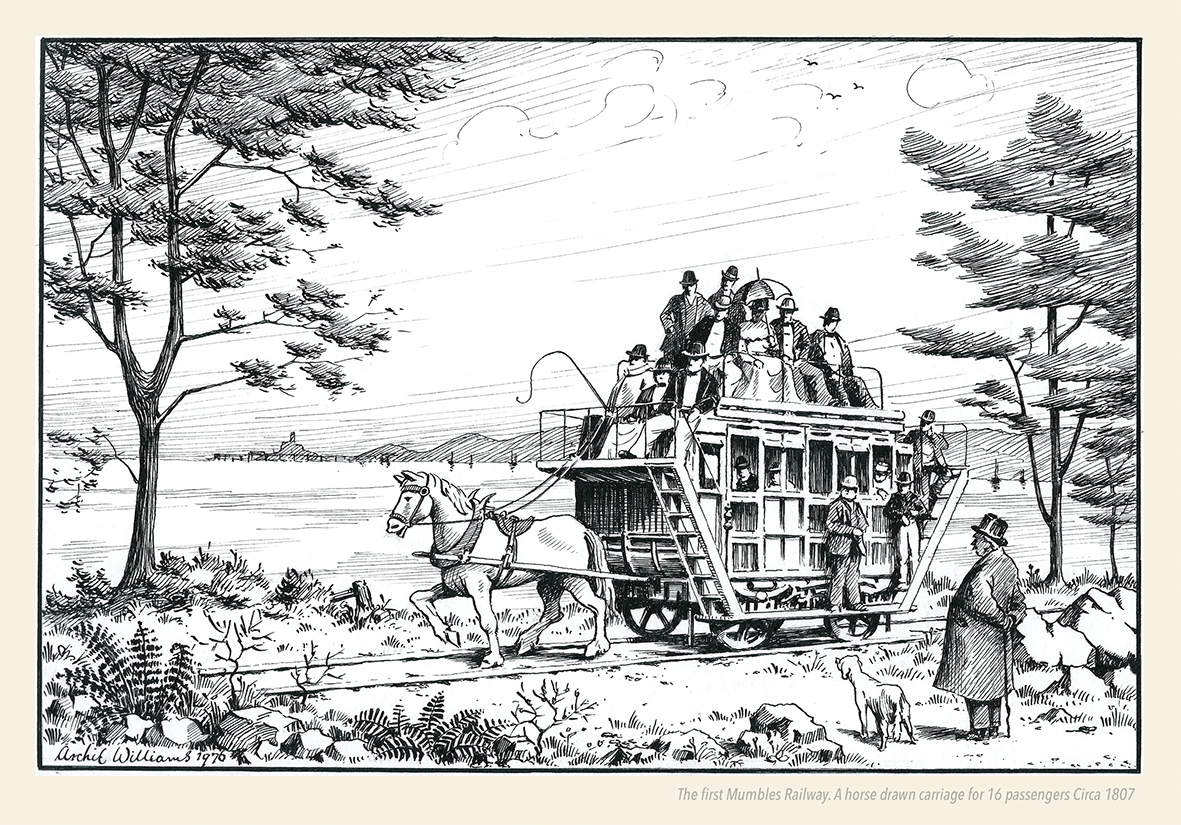 Over the years much has been written on the history of the Mumbles Railway, and I don’t want to cover old ground, but I have found some interesting articles published in The Cambrian and other newspapers which give an alternative history of the railway. Some of these articles may not have been read or heard of since they were published. This article will be covering the first 100 years of the railway.

In the early 1800s Oystermouth was a very small place, barely a population of 1,000. The main occupations at this time were the oyster fishery and the limestone quarry. At this time anyone who wanted to visit Mumbles, would have either had to walk, sail a boat across the bay or ride a horse – but things were about to change.

30th June 1804, The Cambrian published the Abstract Of An Act “for making and maintaining a RAIL-WAY or TRAM-ROAD, from the Town of Swansea into the Parish of Oystermouth” The article continues “The preamble sets forth, that the making and maintaining of a Rail-way or Tram-road for the passage of wagons and other carriage to communicate with the Swansea Canal, near the Brewery Bank, in Swansea, to a field called Castle Hill, in the parish of Oystermouth…..” The article lists out the main the people involved in the Oystermouth Railway & Tram Road Company. The main shareholders of this company included the Duke of Beaufort, Benjamin French, Edward King, Thomas Sylvester and William Vaughan to name but a few.

Anyone interested in obtaining the complete list of proprietors please see the end of this article for details.

By 1806 the track was laid at a cost of £9000 (£8 million today). The first goods train was in service in April 1806; but it wasn’t until 25th March 1807, that the first passenger carriage came into being, thanks to Benjamin French, one of the shareholders. French offered to pay the railway company £20 per year to carry passengers. Also, on this day The Slave Trade Act gained its Royal Assent, which granted the prohibition of the slave trade in the British Empire.

In August 1817, The Cambrian reported what seems to have been the first ‘recorded’ accident on board the train. An unnamed seafaring man, alighting from the train slipped and two of the wheels passed over his left leg. Poor man, he did get off lightly as his leg was only fractured.

During the 1820s a new turnpike road was constructed from Mumbles to Swansea, offering a cheaper service than the railway. Simon Llewellyn who was running the Mumbles Railway placed an advert in 22nd July 1826 edition of The Cambrian advertising the reduced travel fares, from 1s 9d (9 pence) to and from Mumbles to 9d (4 pence). A carriage at this time was able to carry 16 people. The advert couldn’t have been successful as Llewellyn cancelled the railway service. The line became derelict. Was this the end of the Mumbles Railway? 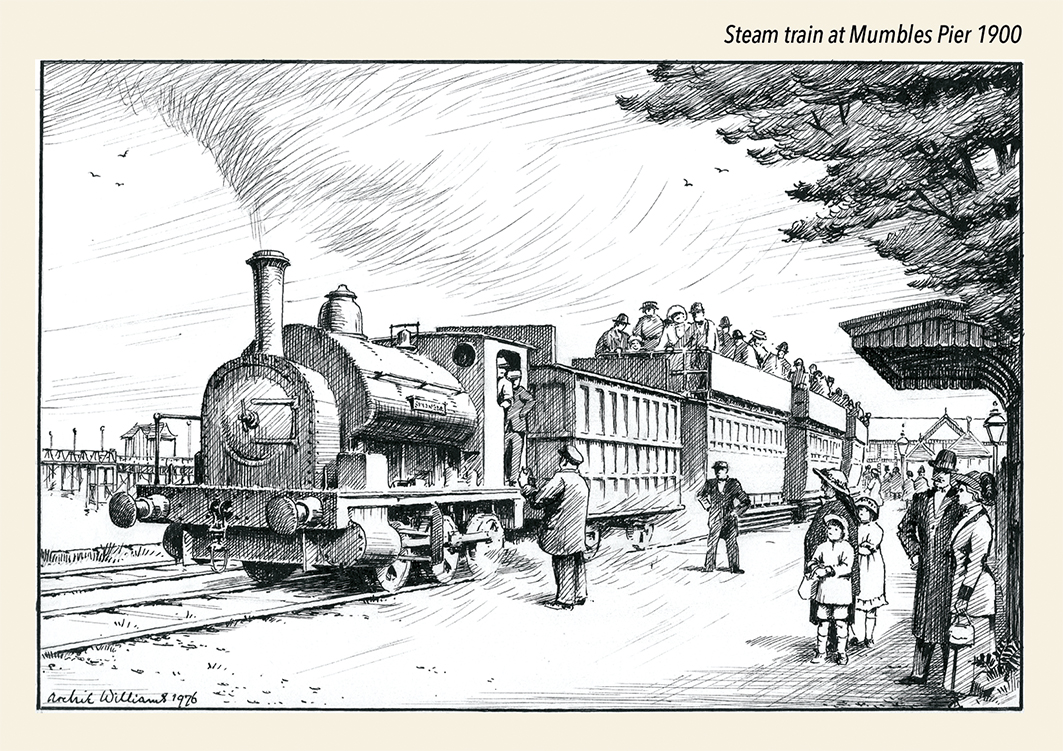 In 1877 the horse drawn carriages were replaced by steam trains. Sadly, there was a dispute between locomotives owners, Swansea Improvements & Tramway Company and the owner of the line, John Dickson, resulting in horse drawn carriages being reinstated until 1896. However, there was anxiety with the introduction of steam power with Mr. L.L. Dillwyn, Mr. H.H. Vivian and Mayor Dr Rogers objecting to the steam locomotives. This is the same John Dickson, who in 1863 started to build St Andrew’s Presbyterian Church in St. Helens Road to benefit Swansea’s Scottish community. 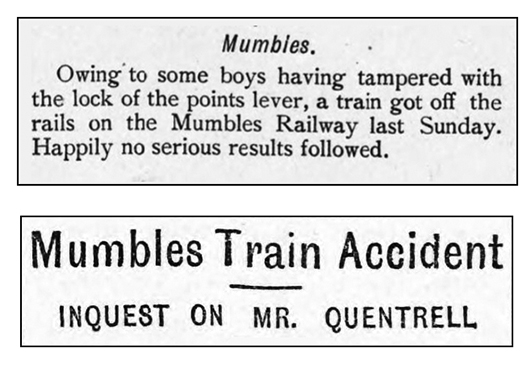 There are Swansea people, who do turn up a few times in the newspaper columns of the day, one in particu-lar, Viner Leeder who in 1894 was a councillor who was suing the Swansea and Mumbles Railway Company for £10 damages caused to his pony and trap as reported in the 28th July edition of The Cambrian. The Mumbles Railway also featured in national newspapers as seen in The London Kelt (right) on 4th April 1896.

The following year, 1897, construction work began on the Mumbles Pier, designed by William Sutcliffe Marsh. Work was completed the following year at a cost of £17,000 (£2 million). It was built for the Mumbles Railway & Pier Company as a terminus for the line from Swansea. At the same time the railway lines were extended from Oystermouth to Southend with work being completed in 1893.

As the new century was dawning, new Acts of Parliament were passed, The Mumbles Railway & Pier Act, 1889, 1898 and 1899. In 1904 at the height of its popularity, the Mumbles Railway received a royal visit when King Edward VII and his wife Queen Alexandra travelled on the train. They came to Swansea to celebrate the commencement of the work at the new King’s Dock.

Remember the aforementioned, Viner Leeder? In 1906 he was now a Coroner who held an inquest into the death of Mr Richard H. Quentrell, agent to Mr. G. Vivian as reported in Evening Express, (left) 28th November.

This article ends in 1907, when the Mumbles Railway celebrated its centenary.