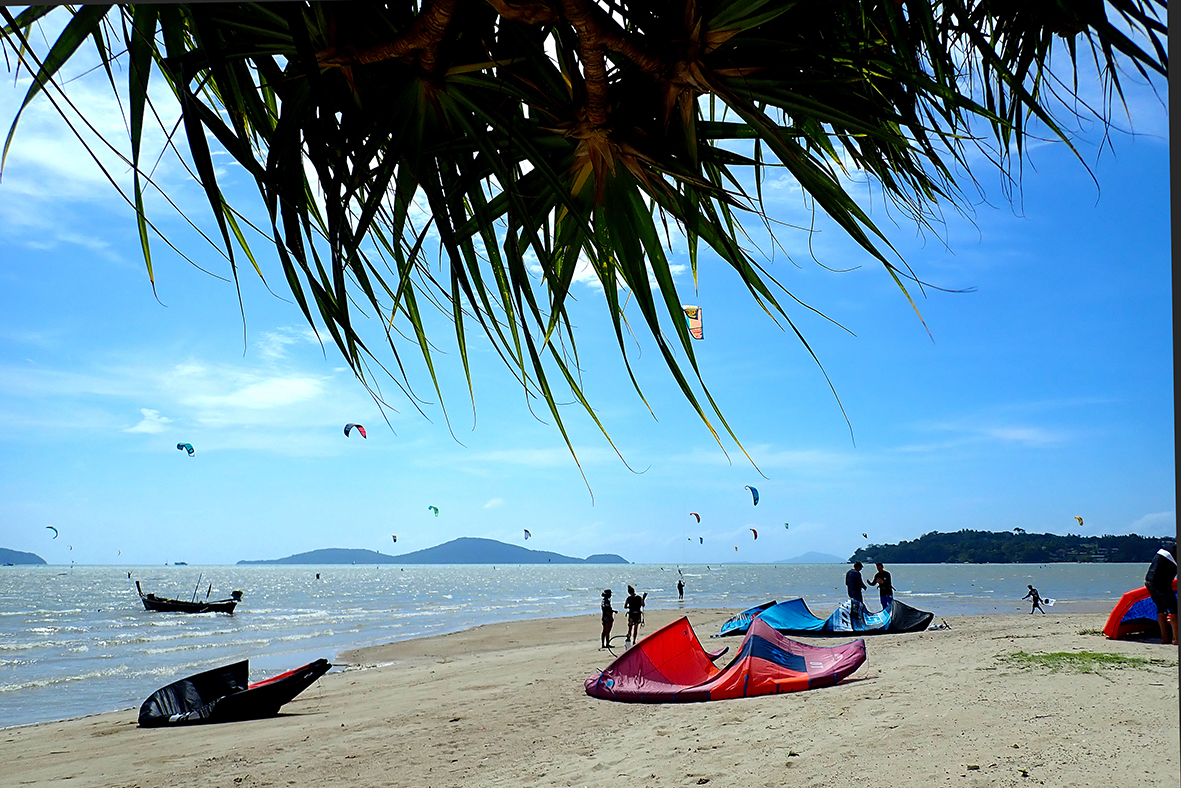 Rawai beach with its kitesurfing school

While most of us were caught up in the pre-Christmas shopping frenzy, Liz and her partner Gareth were sunning themselves in Thailand, where they went island-hopping. This month we focus on Phuket with its stunning white sand beaches and Buddhist Temples.

Thailand’s largest island Phuket is known as one of the world’s best beach destinations. The green-blue waters of the Andaman Sea, lap across fine white sand, bordered by swaying palm and casuarina trees. The island is home to many high-end resorts, with beaches such as Patong, Kata and Karon being better known for their party vibe; although with a little research you can still find some hidden gems. With over 30 beaches to choose from, it is easy to find your very own piece of paradise.

The Friendship Beach Resort where Liz and Gareth stayed, showing the beachside view and the resort’s swimming pool 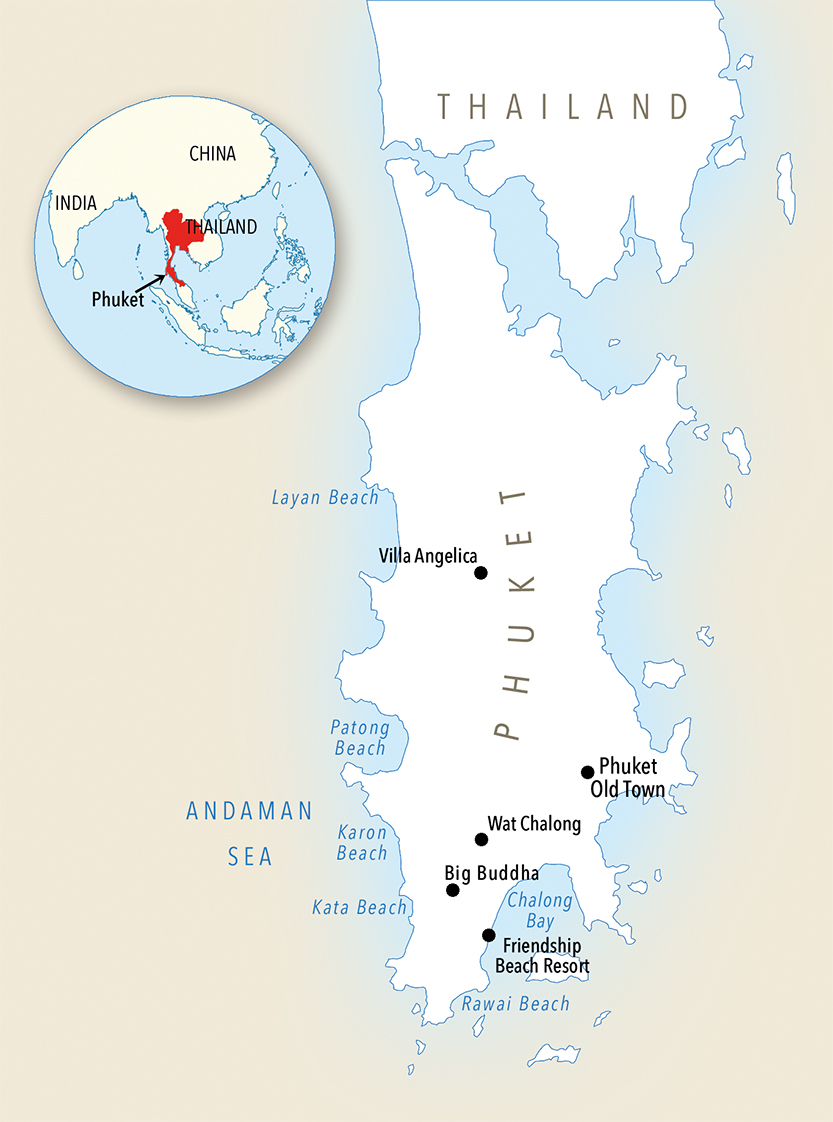 We flew direct to Phuket and spent three nights at the beginning and at the end of a two-week trip, whilst exploring one or two of the islands which border the country. There are over 300 islands stretching from the Andaman Sea to the west and the Gulf of Thailand to the east.

We stayed at a tropical beachfront resort in Rawai, which was the first tourist beach on Phuket, and has panoramic views of Chalong Bay and nearby islands. With improved roads across the island, other beaches have become more popular. Rawai is now more of a working beach, a mooring point for the many fishermen who live there. Located at the southern end of the island it catches the wind, making it the perfect spot for the kitesurfing school next door. Each morning as the tide came in – which was only waist deep for a long way out – boards and riders skimmed the waves. The blue sky transformed into a collage, awash with splashes of red, orange and yellow of the billowing sails. 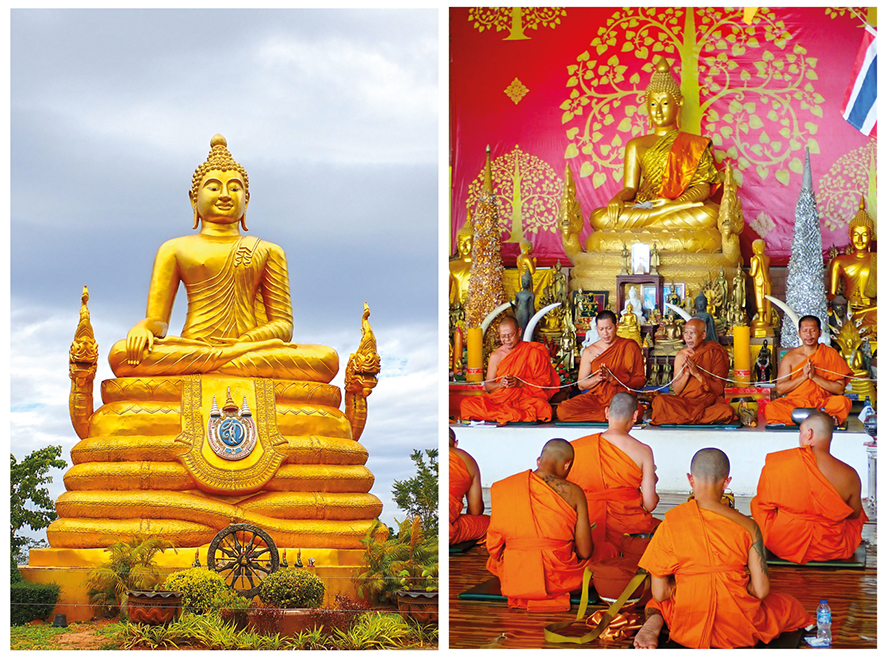 The smaller statue of Buddha. The chanting orange robed monks

Away from the beaches the island is steeped in history and there is a wealth of culture to explore. Top of most peoples’ list is a trip to Big Buddha, officially known as Phra Putta Ming Mongkol Akenakri Buddha, which translates as Happiness on top of Nakerd Mountain. The white marble statue appears as just a speck on the skyline when seen from a distance, when in fact it is 45 metres high and 25 metres across and is visited by both tourists and devout Buddhists. The location for Buddha was chosen by a group of friends, who when out walking in the forest and came across this stunning view – Chalong Bay to one side of the island, Kata and the Andaman Sea on the other. 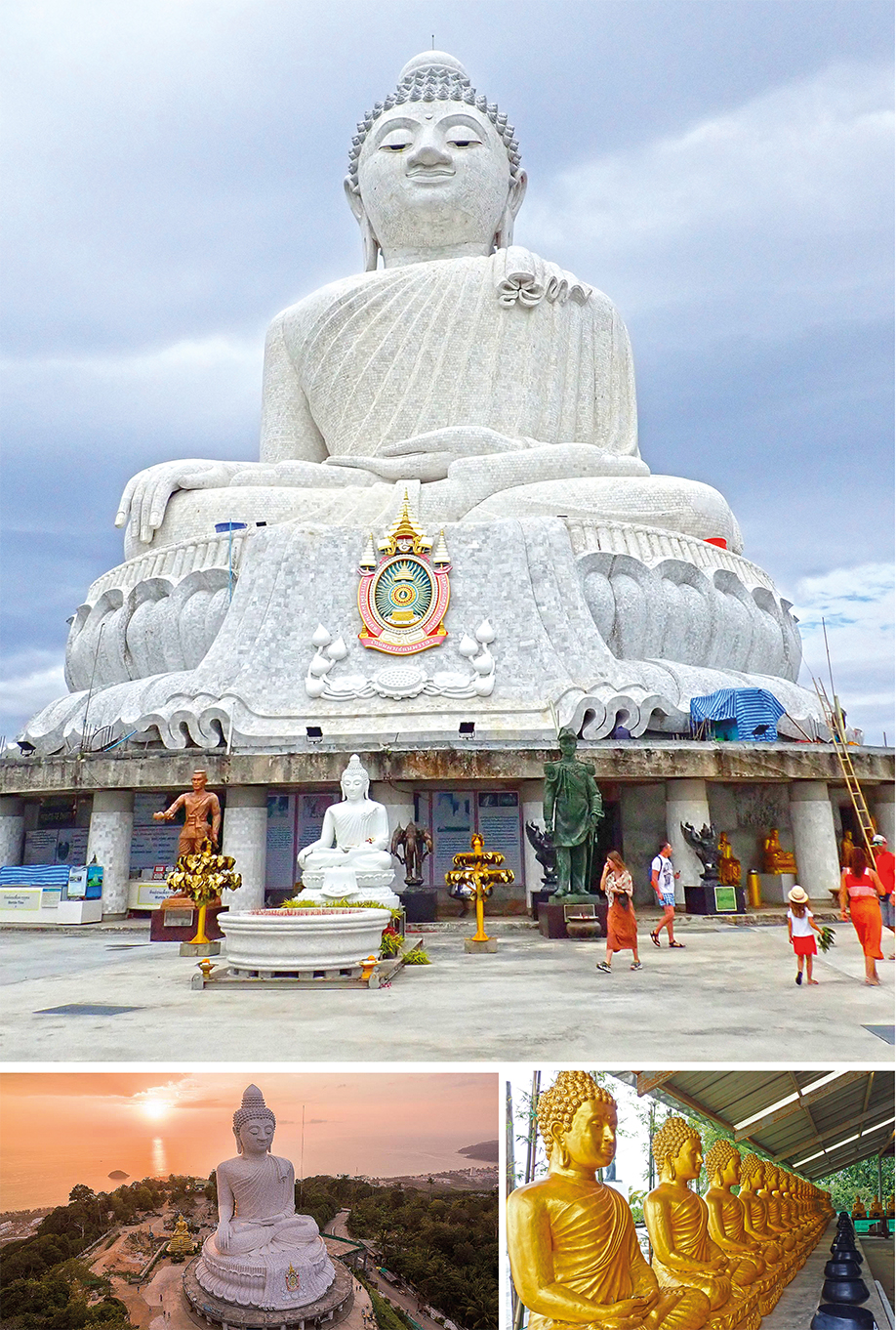 The site is still under construction, building continues with people’s donations. You can sponsor a piece of white marble or even buy a metal leaf on which to write your message, then hang it along with the thousands of others from a tree branch or various monuments at the base of the Buddha, and let your wishes and prayers be carried by the wind.

Dwarfed by Big Buddha, stands a second one, only 12 metres high, and in contrast made from 22 tons of brass at a cost of 8 million baht. A prayer hall lies beneath these figures, home to rows of golden Buddha’s. When we visited, morning prayers were taking place. The chanting from the orange robed monks who sat cross-legged on the floor, echoed around the hall, where a line of bare foot visitors waiting solemnly to receive a blessing.

Leaving behind the incredible views and spiritual surroundings we drove down the jungle covered mountain road, briefly spotting elephants as we skirted several sanctuaries. And on past roadside villages before emerging back into the stream of busy island traffic, which was followed by a short ride to Wat Chalong a historical Buddhist temple in Phuket’s Chalong Bay. 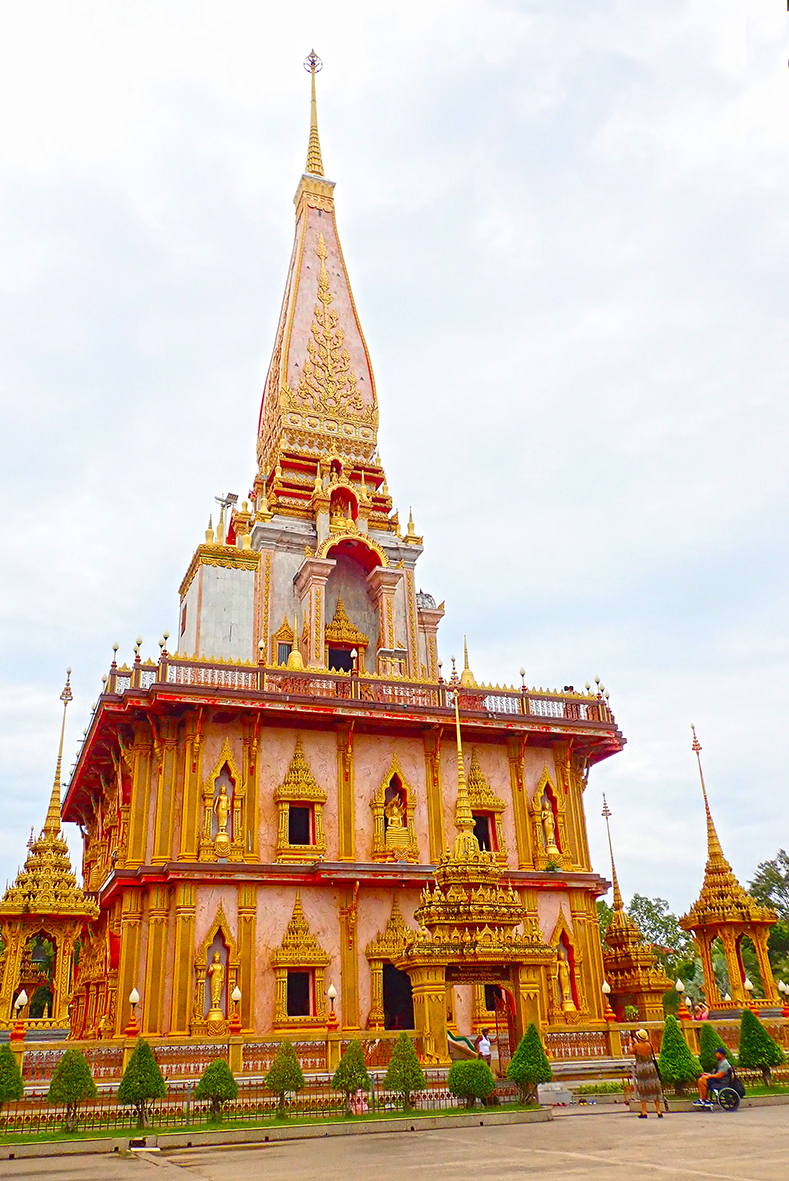 There are many temples on Phuket though Wat Chalong, built in 1837 is the largest and most revered.  It’s associated with healing, as two former abbots were known for their knowledge of herbal medicine. Worshippers stick gold leaves to the statues of these two monks, to pay their respects.

Enclosed in the grand pagoda within a 60-metre tall stupa (chedi) is a splinter of Lord Buddha’s bone. Every day, locals come to pray, light candles and make offerings of lotus flowers. Throughout the many halls of the temple, you will find life-size golden statues. Thai furniture and pieces of decorated porcelain add to the beauty; the walls and ceilings are decorated with intensely coloured paintings depicting Buddha’s life. 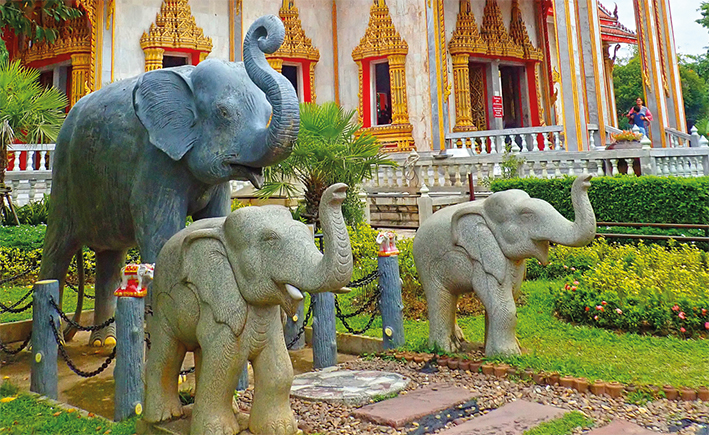 The grounds are as equally beautiful; elephant statues flank the white painted buildings which have ornately decorated tiled roofs. They are the perfect setting for wedding photos – which as luck would have it, I was able to capture a couple wearing exquisite Thai dress on their special day.

This took place to a backdrop of exploding fire-crackers, set off in a brick chimney – a form of gratitude for answered prayers. Locals come to the temple to pray for health, wealth, and good luck – and also to ask for the winning lottery numbers! 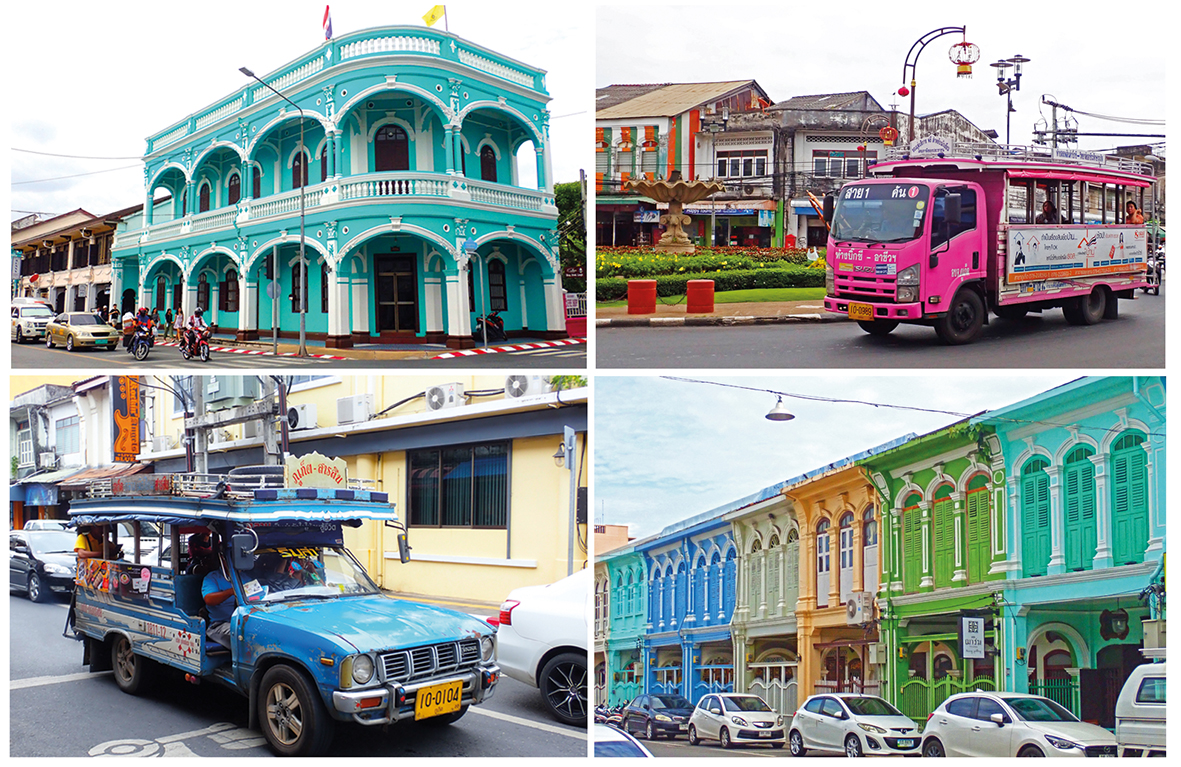 A flavour of the brightly coloured architecture and modes of transport, Phuket old town

Phuket Old Town oozes character. It was built on riches acquired during the tin boon of the last century, when the metal was a valuable commodity. The mining industry attracted Portuguese and Chinese merchants thus creating the Sino-Portuguese architecture visible today, mixing western colonial style with the shophouse dwellings preferred by the Chinese.

I visited i46 – an 80-year old family home which has been transformed by Roengkiat (Nong) Hongyok, into a café and information centre – it was like walking into a living museum. Nong a fourth-generation Phuketian, is a descendant of an influential family and lives here with his daughter, wife and parents. Traditionally the distinctive Chinese shophouses were designed so families could live together combining multiple spaces behind a commercial shop front.

We took a seat in the cool inner courtyard, amongst lacquered furniture and glass cases spilling over with ancient artefacts brought from China many years ago. As we drank tea and sampled a tray of delicate sweets, Nong told us about the family history, giving life to the black and white figures looking back at us from old photos hanging on the walls. His great-great-grandfather, a Chinese monk, had come from Fujian in China to preach in Phang-Nga a province of Phuket. It was here that he met his future Thai wife. One of their sons, Nong’s great grandfather moved to Phuket, built a successful tin mining business and went on to own many homes in the district. In recognition of his achievements he was given the Thai name Hongyok by Royal decree, and to this day the extended clan is one of the most well-known and wealthiest families on the island.

Renovated buildings with colourful shuttered wooden windows, stand alongside old mansions, many now converted into restaurants, bars, guesthouses and galleries, make the streets of Phuket Old Town a hidden gem to stroll along and explore. Nestled between tall buildings set in a small courtyard is one of the finest secrets, the architecturally extravagant and vibrant, Shrine of Serene Light. Amidst the darkened interior ancient murals tainted by years of burning candles line the walls. It’s a place of sanctity but also a haven of calm in a busy city. 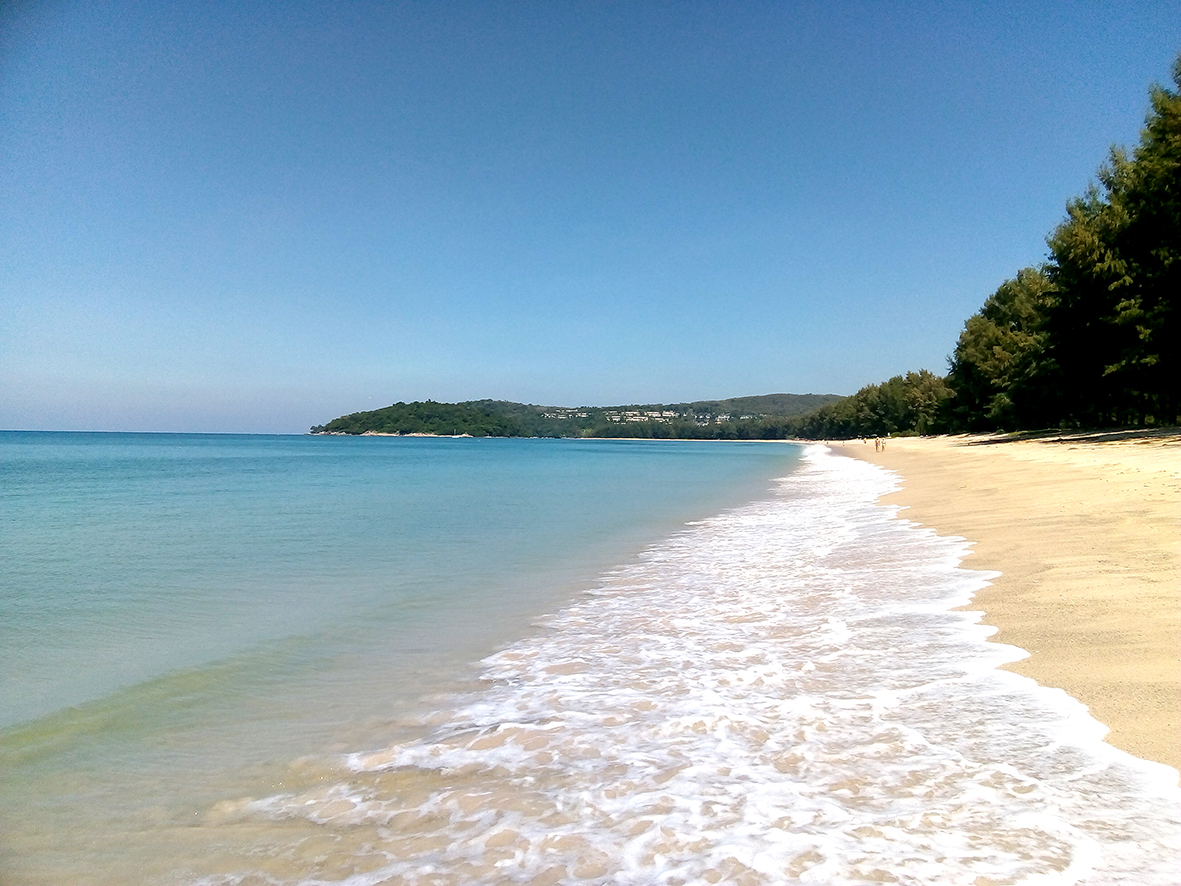 On our return to Phuket (tales from the other islands another time) we stayed along the North West side of the island in an exquisite small Thai-style property, Villa Angelica in the secluded tropical Laguna area. A five minutes’ drive away from the breath taking, tranquil Layan beach. In contrast to many of the west coast beaches it was unspoilt, uncrowded and off the tourist trail. It’s naturally beautiful, with crystal clear turquoise blue water and tall pine trees to provide much needed shade. 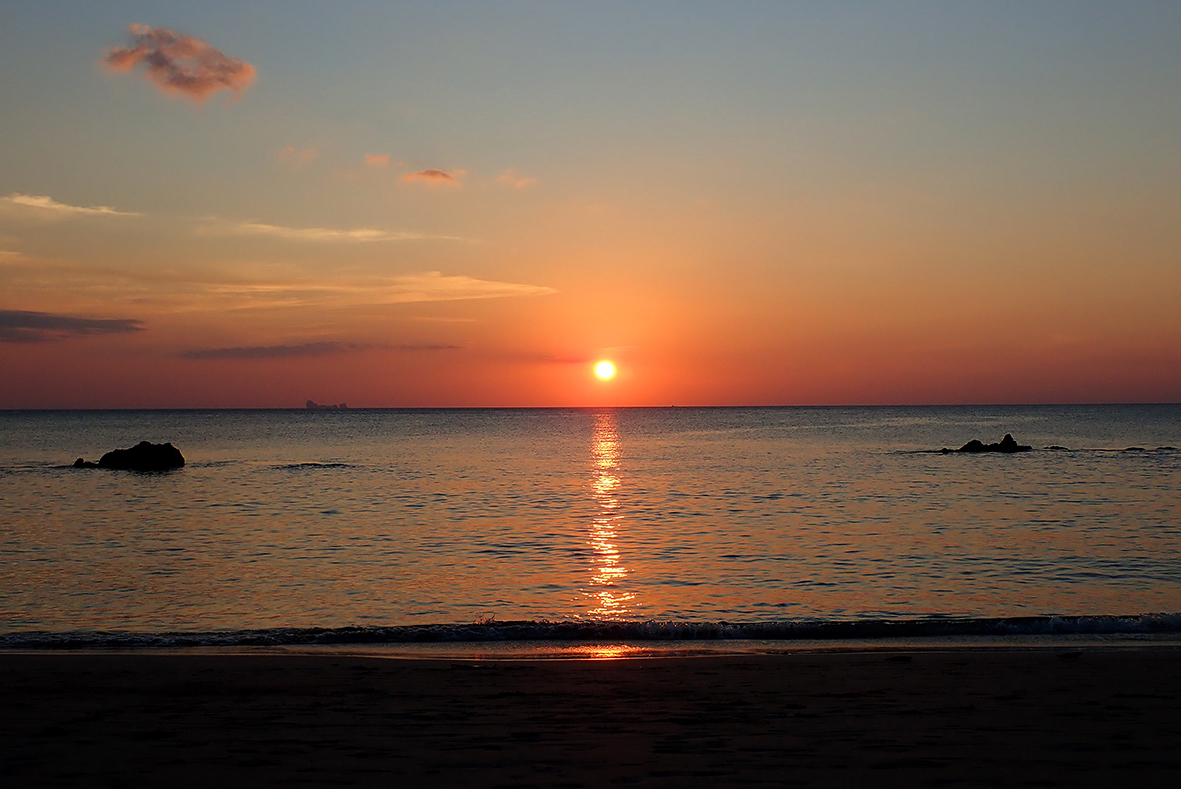 Our hosts at Villa Angelica were Sirpa and Paolo who have been in the hospitality business in this region for over 30 years and made the end of our stay in Thailand memorable, not only for the luxury accommodation, but for their wealth and knowledge of the area.

Thailand is a country of many cultures, stunning beaches, lush vegetation and above all some of the world’s friendliest people, that’s why it is known as The Land of Smiles.