Liz was lucky enough to get what she wanted for Christmas this year, although I’m not sure it could have been much of a surprise – a hula hoop must have been pretty identifiable under the Christmas tree. If you want to improve your fitness this year, then be like Liz and join a class – there are plenty for all ages and abilities right across the city. 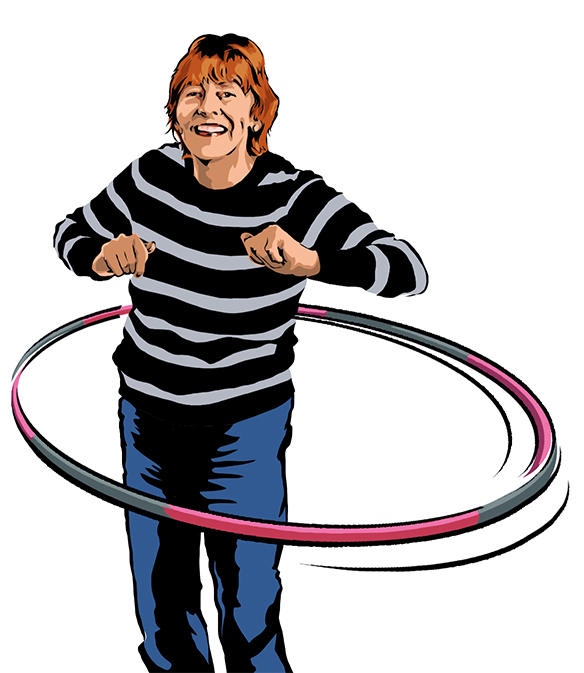 For Christmas I had a hula hoop.

It was a gift from Husband and, unlike the hair-cutting kit he gave me when the boys were young – ‘think how much money you’ll save cutting our hair yourself’ – I actually wanted a hoop.

Having spent a lifetime not being able to hula hoop when I was offered the chance to try it late last year I declined. ‘No point,’ I said. ‘It will only fall straight down. I’ll do the stepper instead.’ I was in exercise class at the time and the teacher was encouraging.

As she’s so nice I didn’t want to disappoint her so she watched as my hoop immediately flew to the floor knocking the fire extinguisher off the wall. I didn’t try again for a while after that but my partner one morning was equally encouraging and, admitting she’d never been able to do it before either, told me the secret.

And it worked! I can hula hoop! Now I can’t wait to get back to exercise class and demonstrate my skill.

I’m writing this article on the second day of January. I meant to start on New Year’s Day but I failed in my resolve to give up procrastination. It’ll be February by the time you read this and, chances are, your resolutions will also have gone by the board. If they haven’t, well done you!

One study found that 80% of resolutions are broken by the second week in February. Another study found that, along with eating better, getting fit was the most popular resolution. I like to think that I have quite a healthy diet – Christmas excepted – and for the last fifteen years or so, with only one or two short breaks I’ve taken regular exercise by which I mean classes as opposed to walking George which, these days with his arthritis, is more about smelling the roses than getting anywhere.

Let me say one thing: I am not an exercise freak or even a fan. The best bit is coming home afterwards feeling smug and having a nice cup of tea. I don’t get up and think, ‘Yay! Exercise today.’ It’s more like, ‘Ooah, my throat’s a bit sore, maybe I shouldn’t go.’

I currently attend two classes, both aimed at the slightly more mature demographic. Both groups include women in their nineties. Having not died from all the fatal illnesses I’ve believed myself to have over the years I have now reached the point where I can’t imagine dying so keeping myself in a state in which I can enjoy all these years ahead seems like a good idea.

And, after all, my body is a temple. It may look less like a stately edifice and more like a bouncy castle – and is treated as such by the grandchildren – but it’s the only one I’ve got, so taking care of it is less of an option and more of a requisite. But what does treating your body as a temple actually mean?

Sometimes the quote from Paul’s letter to the Corinthians is used to subtly condemn those who have chosen to have piercings or tattoos, or who suffer with body issues leading to eating disorders or obesity, or drug/alcohol/tobacco addiction.

But that seems to ignore the fact that Christ came to find us as we are. He considered our bodies to be good enough to move into. He doesn’t judge on outward appearance or condemn us for the issues with which we struggle. Christ wants to help us.

The quote from Corinthians goes on to say, ‘… honour God with your bodies,’ and judging by the way Jesus lived his life I’d suggest that one way we can honour God with our bodies is by serving others. 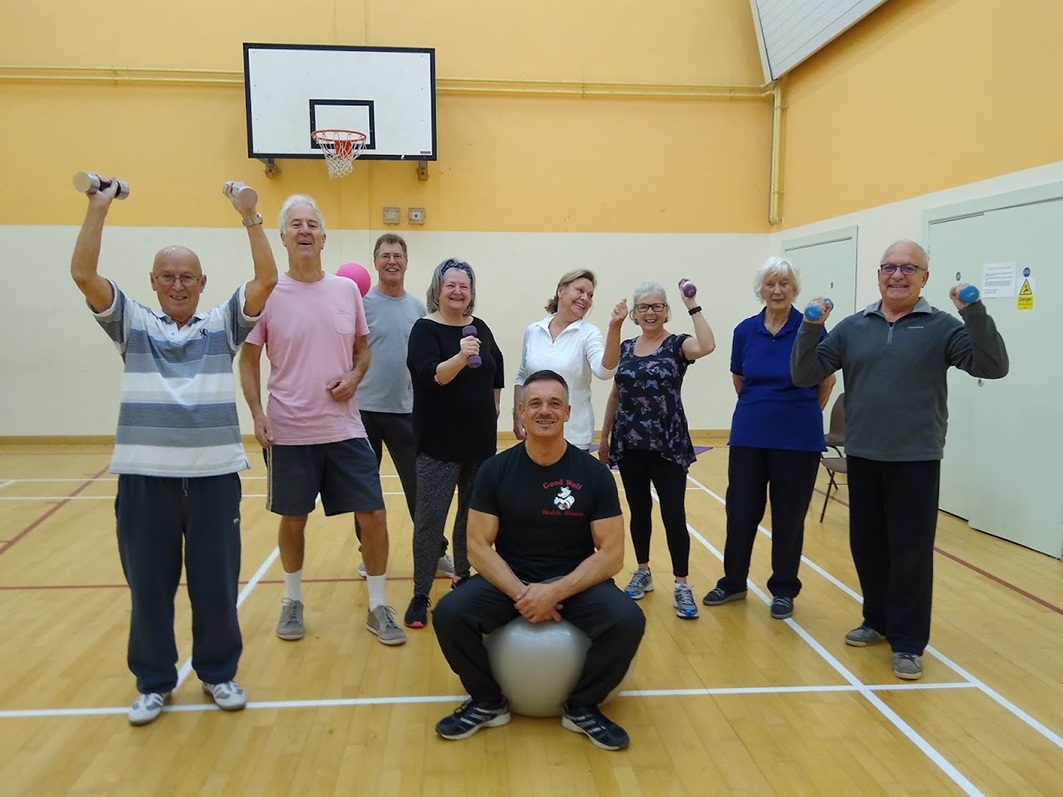 Anyway, in what was his last sermon, St. David famously said, ‘Do the little things, the things you have seen me doing.’ Jesus said something along the same lines, ‘Feed the hungry, clothe the naked, visit the lonely and sick, care for each other.’ Not a bad new year’s resolution to make.

Or you could go to an exercise class. Elaine, my Monday teacher, said her resolution for the new year is to get us all, ‘lifting and panting.’ So, if you fancy a bit of that, read on.

Other classes are available but I can recommend both these as places where you work at your own level but where the teacher will push you if she/he thinks you’re capable of more.

Photo: Gym with Jim on Wednesday