This month I thought you’d like to read about the wonderful work of a Swansea couple, who spend part of the year in Greece caring for stray and feral cats. Sue and Ron share a little of their experiences here and show that despite the sunshine and idyllic setting, there is sadness, worry and endless hard work in their attempt to care for the local cats.

We have always loved Greece and all things Greek, and it was our dream to buy a property there. On one of our numerous trips, we visited and fell in love with an area known as The Mani, in the southern Peloponnese. It is a wild and rugged area dominated by the Tayetos range of mountains, about a three-hour drive from Athens.

In October 2002, we found an old house in need of renovation in a small working village 20km from the city of Kalamata. It was a difficult project to undertake whilst still working in the UK, but finally in April 2005 we were able to move in. 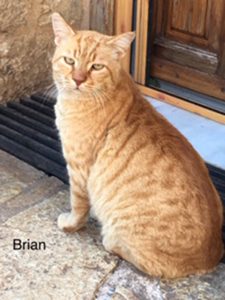 As cat lovers, any cat coming into the garden was offered biscuits and fresh water. Our very first cat was a ginger male who we called Brian. He was still a kitten and although happy to sit in the kitchen he shunned any approach to touch him. Brian disappeared, and we found out later that he became a large alpha male impregnating the local female population. One of the females was a small tabby called Pearl, who came regularly for food and often brought her ginger kittens with her. Pearl disappeared and we have to assume that she died. Endless pregnancies and little food put a huge strain on female cats and their babies, and we have had to harden our hearts to the knowledge that many have disappeared with their fate unknown.

The villagers don’t seem to have any particular affection for the cats, but they are not necessarily unkind to them. Sadly, this was not the case when we first moved into the village, as one villager (who has since died) was known to put poison down, which results in a very painful death. Poisoning continues across Greece and both dogs and cats have died awful deaths.

Many Greeks are now becoming pet friendly. Unfortunately, they tend to like pedigree dogs, so there are a huge number of non-pedigree stray dogs – with many females being discarded with their puppies. There are a couple of local charities who try to re-home both cats and dogs either locally or to new homes in northern Europe, mainly Germany, Austria, Netherlands and the UK. If money were no object I could keep Kenwood full, with Greek cats!

It is still common to see children run after cats shouting and screaming at them; the parents pay no heed and often actively encourage them. Only today there was an article on social media about three youths who threw a cat over a sea wall onto the rocks below and filmed their actions. There was public outcry and the authorities are now looking for the perpetrators.

Neutering is an expensive operation in Greece; 75 euros for a male and 100 euros for a female. Fortunately, we have found a vet, Evangelos, who tries to keep his costs as low as possible. He works from a fairly basic surgery but is kind and caring. Many Greeks believe that neutering is an unnatural intervention, hence the amount of unwanted animals. The Greek Church also teaches that animals don’t have souls, therefore are not sentient beings! 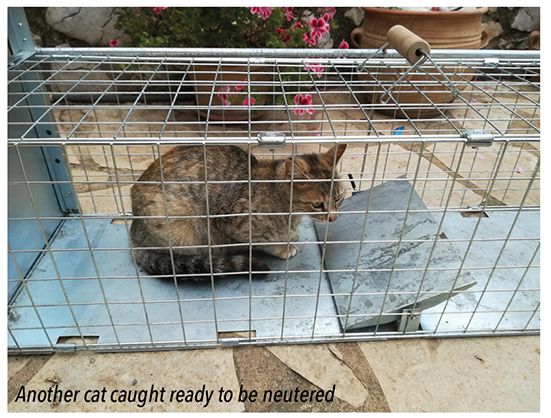 We do what we can with limited resources. Last year we took three large males Mavro, Duke and Sam, to Evangelos to be neutered. No owner has come forward to ask us what we have done and the cats are much calmer.

This year we were put in touch with a retired Austrian vet, Gotfried. He has been coming to the area since he was a young boy and loves to walk in the mountains. Gotfried agreed to neuter some of the stray cats for us, so we set up an operating the-atre in our home – it is all very basic, but everything is hygienic and we sterilise the instruments in boil-ing water – and Sue acts as theatre nurse! Over the course of two and a half days, we were able to neuter six females and six males. The females are so much happier and healthier, and no longer have to suffer the unwelcome advances of males and the constant hunt for food to feed kittens.

Christine is a British woman who lives full time here in the village, and when we are back in Wales, she visits every day to feed the cats and to give them treats. Without her help, the cats would struggle to survive, kittens in particular, as they won’t have honed their hunting skills.

Over the years there have been many cats who have come and gone, but some have become much loved pets. These cats are allowed into our lounge on the second floor of our house, the others are confined to the kitchen.

The Boy was our first beloved boy. He arrived with his mum back in 2006, and they were like chalk and cheese. He was a handsome young pale ginger boy and his mum, Mutti was a tiny, dark ginger female. Sadly, she disappeared fairly soon after her arrival, but The Boy stayed until sadly he had to be put to sleep in September 2018 because of a nose cancer.

Milly, our first female house cat, was a small ginger girl. She was always very timid but happy to sit at the top of the stairs. Sadly, she too had to be put to sleep because of nose cancer, when she was about 8 years old. 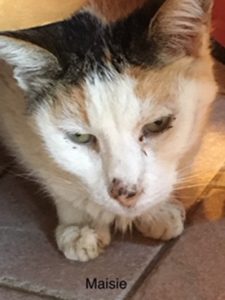 Maisie, daughter of Milly is now showing her age and quite frail. There was a time when she was the matriarch and all the other cats knew not to get too close to her. She was very fond of The Boy and they were often found sleeping together.

Ben was a reserved, shy, ginger boy who gradually gained my trust and was always ready to run away in the event of trouble. Sadly, he has not reappeared since our return on 29th December.

Bella is a little black cat who brought her five kittens into our garden. She is gaining our trust and I hope that we can catch her for neutering very soon.

Thanks so much to Sue and Ron for sharing the wonderful, yet challenging work with these cats. If anyone would like to make a donation to help fund further care, Sue is planning to set up a Facebook page and/or a donation site – I’ll give you the details next time.

Swansea Cats Protection can be contacted via our Helpline 0345 260 2101 or email us at swanseacats@hotmail.co.uk