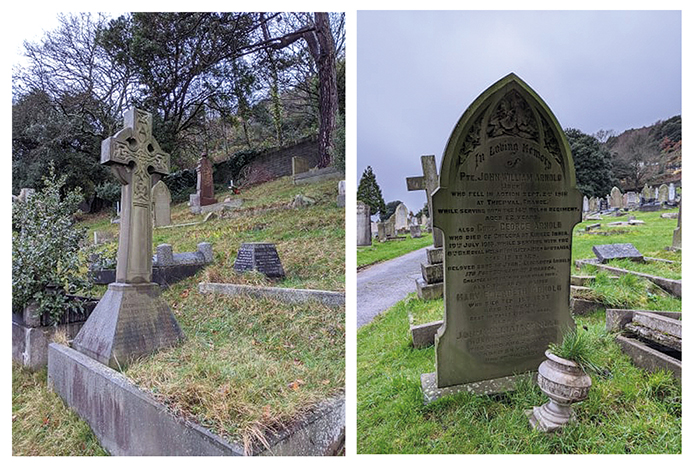 “Talking Stones” was an ITV Wales programme broadcast during the early 00s; it was presented by the motor-biking vicar, Lionel Fanthorpe. He toured Wales visiting graveyards and cemeteries, researching the lives of those names inscribed on the headstones. He left no stone unturned, or so he thought!

Mr Peter May has kindly given me permission to use his photographs in this article. The first is of the grave of Reginald Herbert Wilberforce-Bell (above left) and the second of the Arnold family grave (above right). Both graves are located at Danygraig Cemetery. 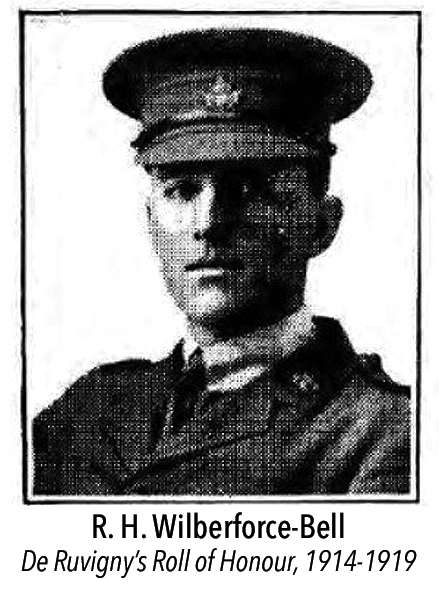 Reginald Herbert Wilberforce-Bell was a member of the Wilberfoss family hailing from Wilberfoss, Yorkshire. Reginald was born in either 1887 or 1889 in Edinburgh, he was the son of Harold Wilberfosse Bell and Lucy Wilson. Grandson of William Henry Bell and Jane Wilberfoss. Harold was a Military Knight of Windsor, a retired Captain who served and saw action during the Second Afghan War (1878-80). It was Harold who assumed the surname Wilberforce by deed poll, and created their double-barrelled surname, Wilberforce-Bell. The family resided at The White House, Grafton, Marlborough, Wiltshire. One other notable family member was that of William Wilberforce, principle campaigner of the Slave Trade Act 1807.

In 1904 Reginald emigrated to Canada, first arriving in Ontario, where he learnt fruit and wheat farm-ing. Later he moved to Battleford, Saskatchewan, Canada. In February 1914, Reginald joined the 105th Saskatoon Fusiliers as a Lieutenant, and in August 1914 at the outbreak of the First World War, he volunteered for the Imperial Service, and was posted with the 28th Battalion, Canadian Expeditionary Force. That winter, the Battalion undertook training, travelling the following May to the UK where further training was undertaken at Shorncliffe Camp, Folkestone, Kent. In September 1915, the Battalion left for France, moving to Kemmel, Ypres, Belgium entering the trenches for the first time. 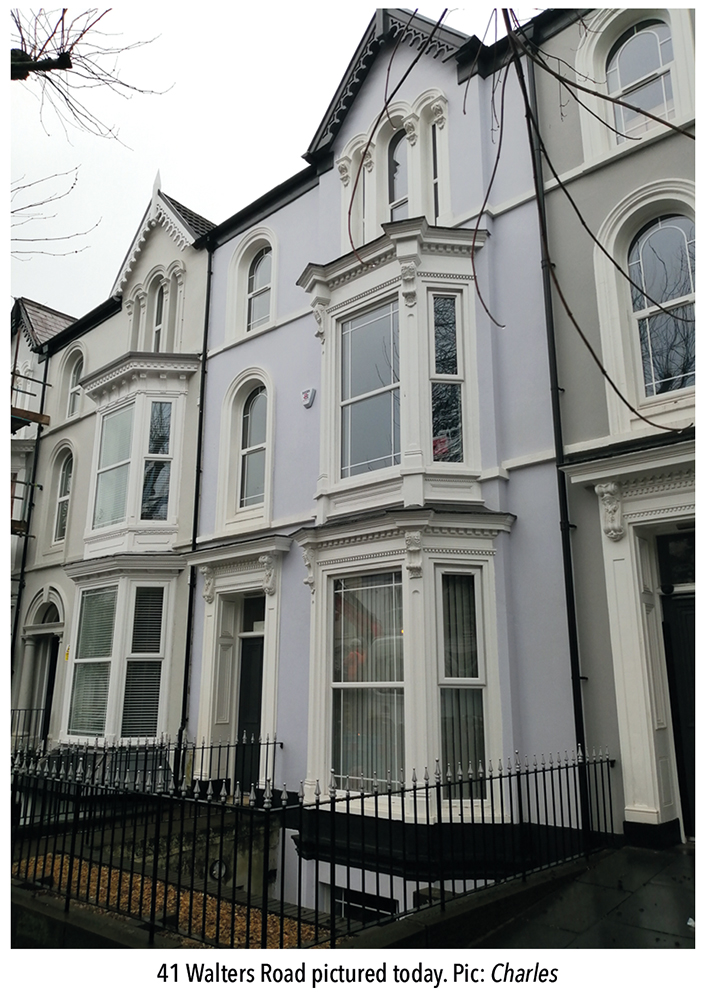 A tour of the trenches entailed four days in the front line, four days in reserve and a further four days rest. 28th Battalion’s second tour of the trenches, commenced on 18th October, when the Germans exploded two mines resulting in 30 men including Reginald, who was a machine gun officer being wounded. A further 19 men were killed. However, even with so much destruction the Canadians stood their ground and the Germans weren’t able to take advantage.

Reginald was evacuated back to the UK. He was a patient at Mrs. Analdis’ hospital, in London. Whilst here the Medical Board, found that 26 year old Reginald, was suffering from “debility and disordered action of the heart” the report continues “this officer was “shocked” by shell and mine explosion in October 1915. In rescuing his men, who had been buried, he strained his heart and has now aortic regurgitation, with irregular action of the heart. He is steadily improving”. 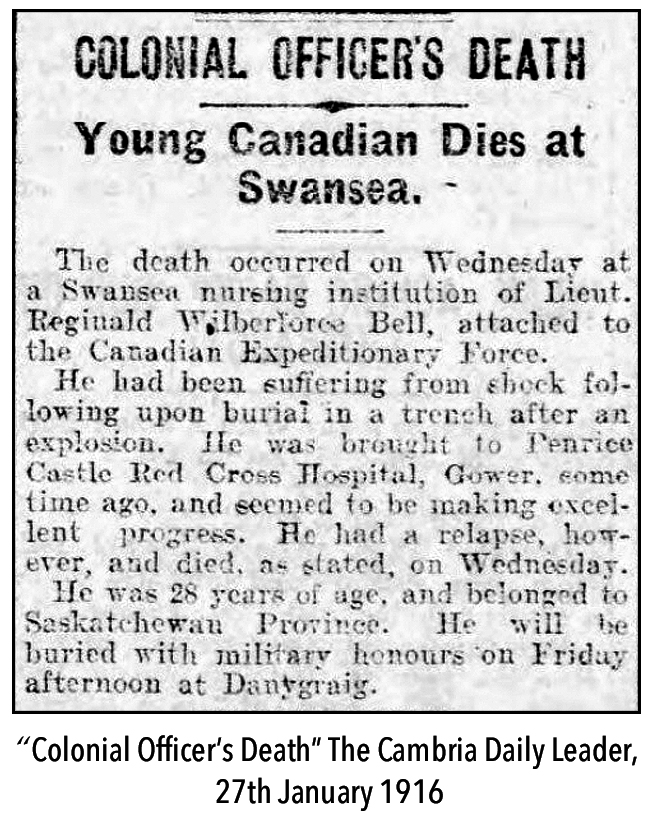 He was given two months leave and for the remainder of his convalescence Reginald was sent to Swansea to Penrice Castle Red Cross Hospital. However, serious symptoms developed; on the 24th January 1916 he was admitted to a nursing home at 41 Walters Road (pictured above right), for further medical attention.

Two days later Reginald died. On the 28th January he received a full military honours funeral and his gravestone at Danygraig cemetery makes references to his military actions of the previous October. St. Nicholas’ Church in Grafton bears a further memorial to Reginald. 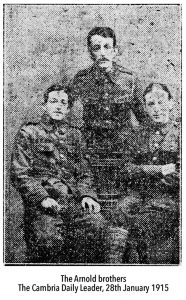 The inscription of the Arnold family grave has four names. Sadly, two of the names, John William and brother George Arnold are in commemorations to them, as they were both killed during the First World War.

When Mr May, posted these photographs onto the internet, Mrs Christine Arnold, commented that there was a family connection with her husband.

What information can be found about the two brothers?

John William enlisted as a private with the 14th (Swansea) Battalion, Welsh Regiment, was killed 2nd September 1916, that is commemorated on the Menin Gate Memorial. There is sadly a slight error on the date of death, as he was actually killed on the 29th August. We can only assume that his parents were told of his death on the 2nd.

Meanwhile George who originally enlisted on the 10th August 1914, stated that he was 17, when he was in fact only 15. He was discharged eight days later. He later enlisted in September 1914 as a private with the 6th Battalion; Welsh Regiment, then in September 1916 transferred to the 8th Battalion, Royal Welsh Fusiliers, a 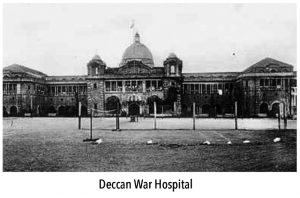 nd was posted overseas. He saw action in Mesopotamia and it is likely that he was evacuated to India for rest and recovery. Whilst on leave, George died from disease at Deccan War Hospital, Poona, on 19th July 1918. Back home his parents received the dreaded telegram.

George was buried at Kirkee New Cemetery, India, along with a further 113 soldiers from various battalions. For a number of years this cemetery was not maintained, but in 2013 the Commonwealth Graves Commission took over the maintenance. George’s name has now been added on the Kirkee 1914-1918 Memorial.

If you come across an interesting headstone and want to know more on the history of the person, don’t hesitate to drop me a line.