This month we get busy in the kitchen and learn how to cook with laverbread, enter the endlessly fascinating world of the coastal rock pool, reveal why our grandparents once drank cocktails that glowed in the dark, and find out from a Nobel prize-winner the answer to the age-old question: ‘What is life?’ Plus, plenty more… 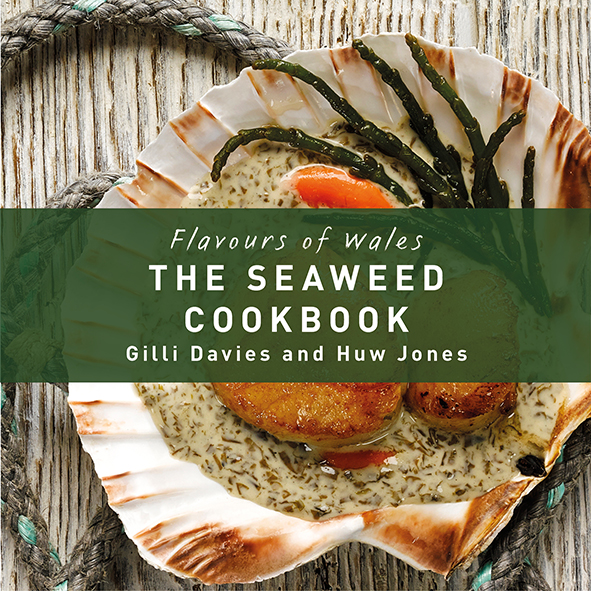 ‘The Seaweed Cookbook’ by Gilli Davies published by Graffeg, £6.99 hb

If you’re anything like me, one of the things you’ll have missed most during the lockdown is a trip to Swansea’s covered market to stock up on the weekly fix of laver-bread. To compensate for this, I have spent some of my new-found free time planning what I’m going to cook when I do get my hands on some of that delicious shredded seaweed, and my source of inspiration has been this fabulous little book by Wales’ favourite cook Gilli Davies, as ever supported by the 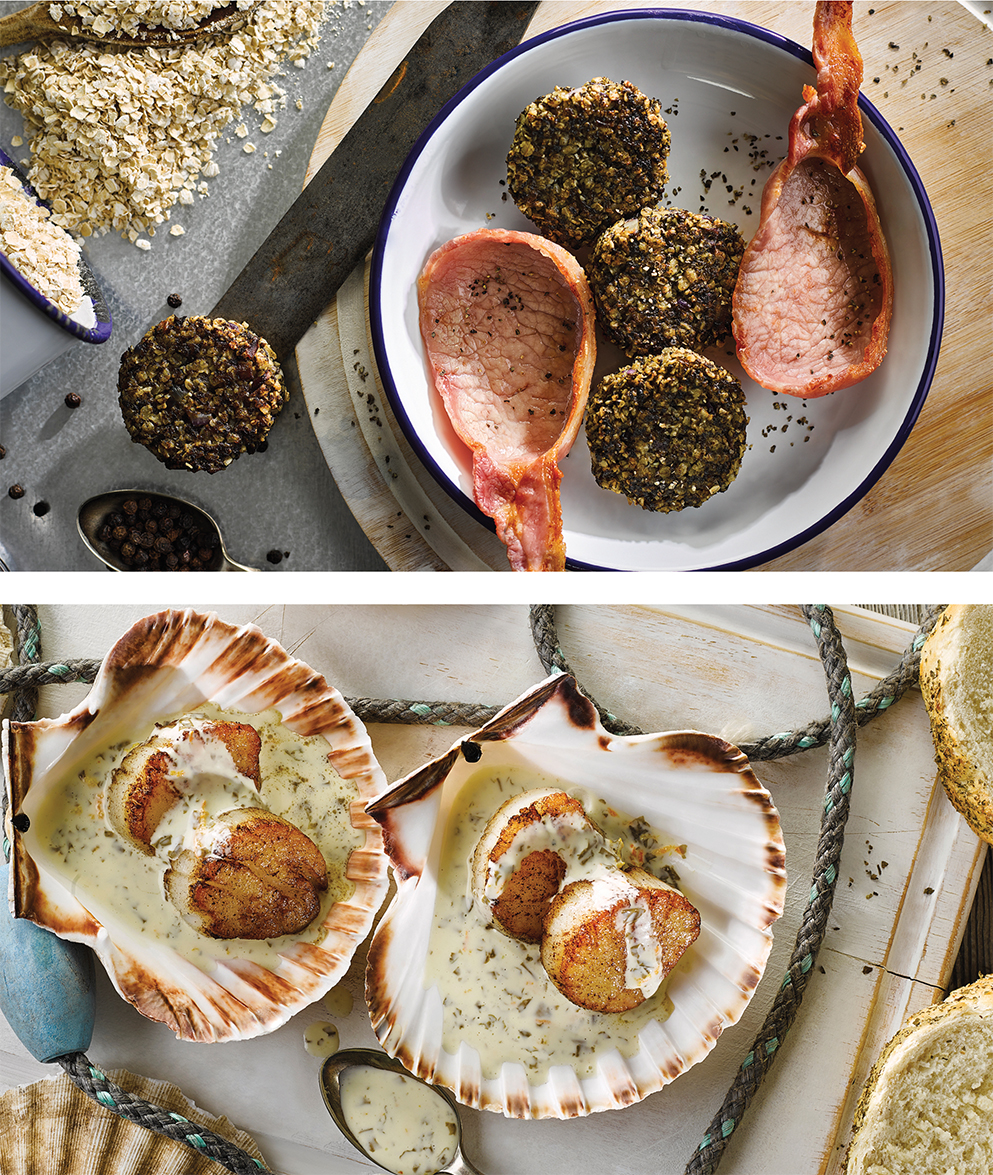 mouth-watering photographic talents of Huw Jones. The Seaweed Cookbook might only be small – it’s less than fifty pages – but it is a culinary treat with a distinctly Welsh flavour, as we’re taken through ten recipes that are quick, easy, tasty and nutritious. Seaweed has been part of the Welsh coastal diet since Roman times, and while laverbread is as ever the main attraction, we have samphire too. Bursting with vitamins (B, B2, A, D and C), low on calories and extremely high in the ‘unusual’ factor, ‘Welsh caviar’ is decidedly tricky to make, so there’s no point you going to the beach to gather porphyria umbilicalis for yourself because you’ll spend the rest of your life boiling, cleaning and shredding just to get something that the experts at Penclawdd have been producing for generations.

If you’re thinking that all there really is to laverbread is fried oatcakes served with cockles and bacon then it’s time to think again, because Davies combines the greenish-black puréed seaweed with crab, prawns, scallops, smoked haddock, Welsh lamb and good old cheese-on-toast to produce a dazzling array of dishes. And just to show that we’re not the only ones to benefit from this delicacy, she also throws in for good measure a simple smoked salmon sushi dish that uses black nori seaweed and sweet soy sauce. If you’re the sort of person that is put off by the idea of eating seaweed, just stop and think about what goes into burgers. It’s a miracle, healthy food: sup-port your local producers and get to the market as soon as you can. 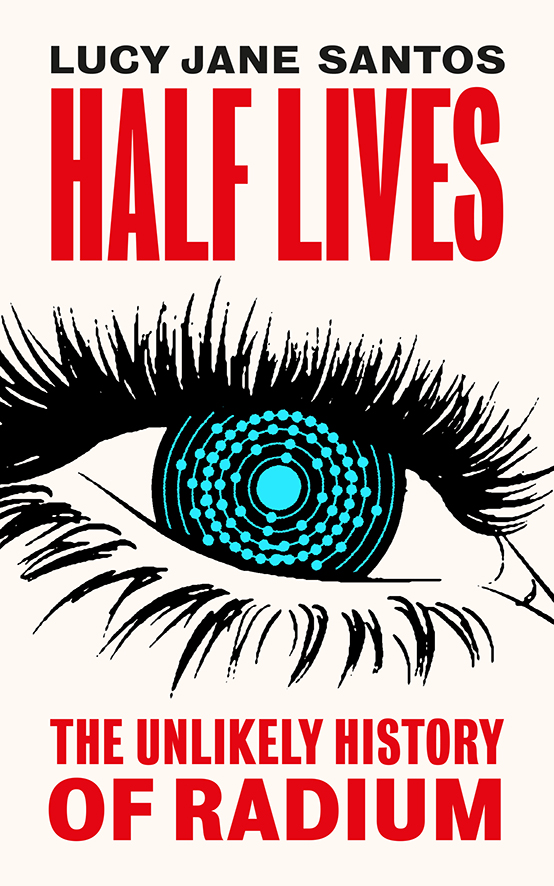 ‘Half Lives: The Unlikely History of Radium’ by Lucy Jane Santos Icon, £16.99 hb

On Boxing Day 1898 scientists Marie and Pierre Curie announced to a distinctly underwhelmed world that they had discovered a new element. So muted was radium’s reception that the Guardian newspaper even managed to spell the names of its discoverers wrongly (no surprise there…) But, with the dawn of the 20th century all that changed, and radium became an unstoppable craze, with manufacturers (of both the sensible and the ‘snake-oil’ variety) incorporating this highly radioactive material into medicines, make-up and pretty much anything that would make them a fast buck (my favourite is the quack-cure O-Radium Hat-Pad that was supposed to cure baldness.) And because it glowed in the dark, radium became a fashion novelty, making an appearance in haute couture, new-fangled ‘wrist watches’ and even cocktails. In her debut book Half Lives: The Unlikely History of Radium, Lucy Jane Santos examines the history of a chemical element from its early days in the laboratory to its extraordinary impact on society at the time. She also delves into our relationship with radioactive elements and searches for an explanation for how radium’s fall from grace after the 1930s made this once desirable substance one that we fear in the 21st century. Clever and entertaining, Half Lives is unputdownable. 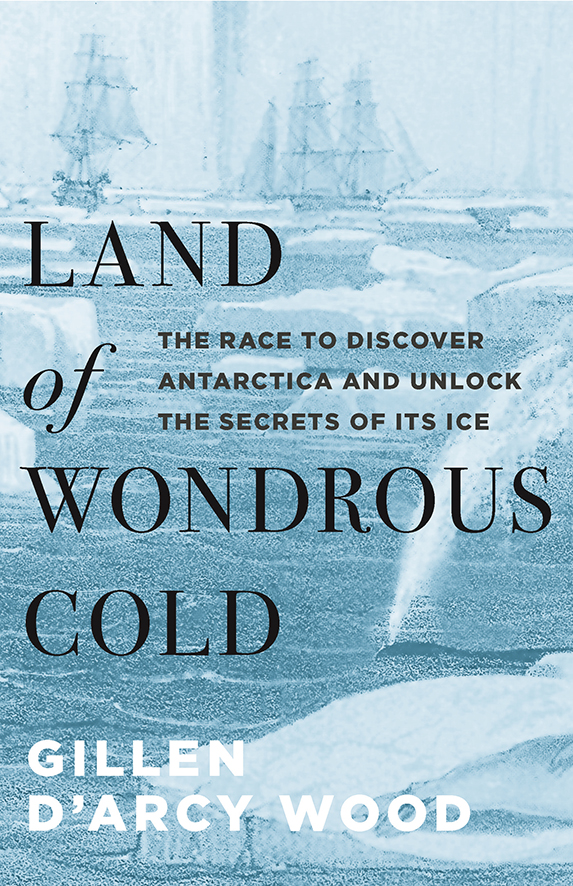 If ever there was a place that unites humanity’s twin obsessions with exploration and scientific discovery, it is Antarctica. And if ever there was a book that simultaneously looked into these two subjects with expertise and enthusiasm it is Gillen D’Arcy Wood’s Land of Wondrous Cold that describes the unfolding drama of the White Continent’s role in plate tectonics, climate change and evolution. Of course, we came to know of these phenomena largely due to the early exertions of human exploration, most notably in the 19th century, when the likes of James Ross, Dumont D’Urville and Charles Wilkes were pushing back the frontiers of both geographical exploration and scientific knowledge. While most of us probably think that Antartica is all about the likes of ‘hero’ explorers such as Scott and Shackleton just before the outbreak of the First World War, Wondrous Cold takes us back to what happened before that era, while cleverly interweaving modern field science that would have been so alien to the early pioneers: icecap instability, rising sea levels and the Ocean

Drilling Program. And this is the strength of Wood’s book, flicking back and forth from 19th to 21st century examining key episodes that link these fabled voyages of discovery to the modern era of polar research. Gripping and informative to the last page. Great stuff 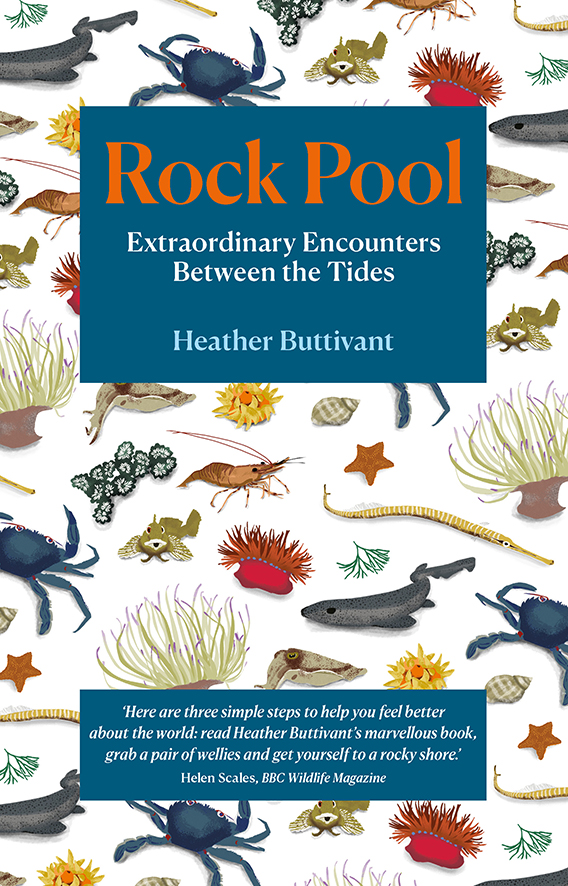 Our beaches are full of creatures that we think we know, from crabs to clams, starfish to anemones. But in fact, as we clamber over the limestone rocks of Gower’s tidal zones, we miss so much of what’s going on in the mysterious coastal world between land and sea. Rock Pool is naturalist Heather Buttivant’s invest-igation into that world, and it is a ‘must read’ for anyone with even a passing interest in exploring the teeming pools of wildlife that for most of us here in Swansea are right on our doorsteps.

“Wherever I go, I seek out beaches,” says Buttivant. “They are woven through my life; a changing constant in a constantly changing world. Every walk through the rock pools, from the tideline to the low water mark, takes me on a journey into the sea and challenges my understanding of my world and of myself.” And it is her journey (along with some exquisite writing that you’d not normally expect in a book on alien-looking creatures) that makes Rock Pool such an enchanting read. One minute, Buttivant is reminiscing about her childhood paddling in the shallows, and the next she’s describing grand-scale oceanic discoveries. Told through a series of illustrated ‘mini-biographies’ of twenty-four creatures, Rock Pool opens up a world so weird and wonderful that it might as well be on another planet. 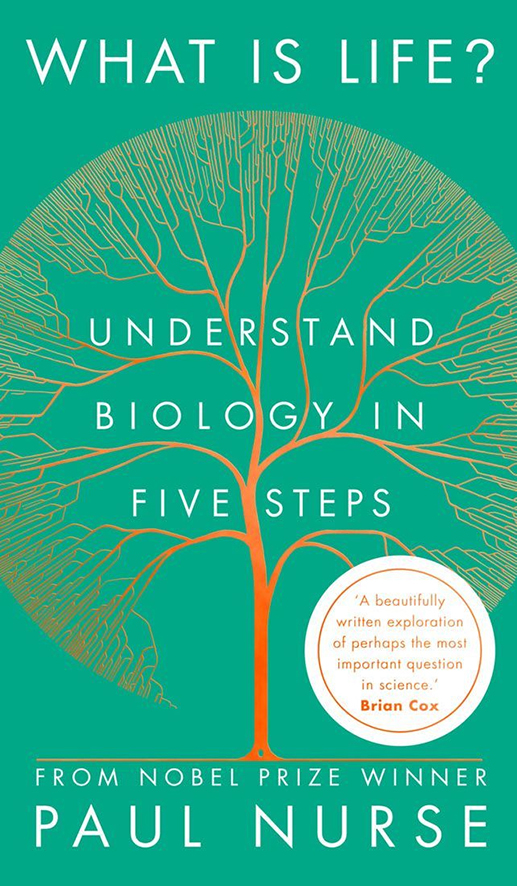 It seems to be a straight-forward statement of fact that we are surrounded by life: abundant, diverse and extraordinary. But how did it start and what does it actually mean to be alive? These are the questions that have puzzled Nobel prize-winner Paul Nurse since he first saw a butterfly as a child, and who has subsequently spent a career spanning five decades trying to get to grips with how living cells work. In his lovely debut book What is Life? Nurse charts this fascination from his ‘butterfly moment’ to becoming a leading light in the world of cellular biology, taking us ever closer to under-standing how we can tackle problems, such as cancer, that confront humanity. The fact that Nurse doesn’t expect all the big questions to be answered in his lifetime means that, for all his accolades and fame as a scientist, he sees himself very much as only part of the story, a story he wants to share with people who aren’t biologists. And that’s the key to why his guided tour of the five great ideas that underpin biology is such a success: an expert talking to non-experts as equals is something you don’t often find. Even if your last encounter with cells was peering at a thin slice of onion under a low-powered microscope at school, you’ll come away from What is Life? with a renewed interest in a subject that is so vast that we barely give it a second thought. Brilliant. 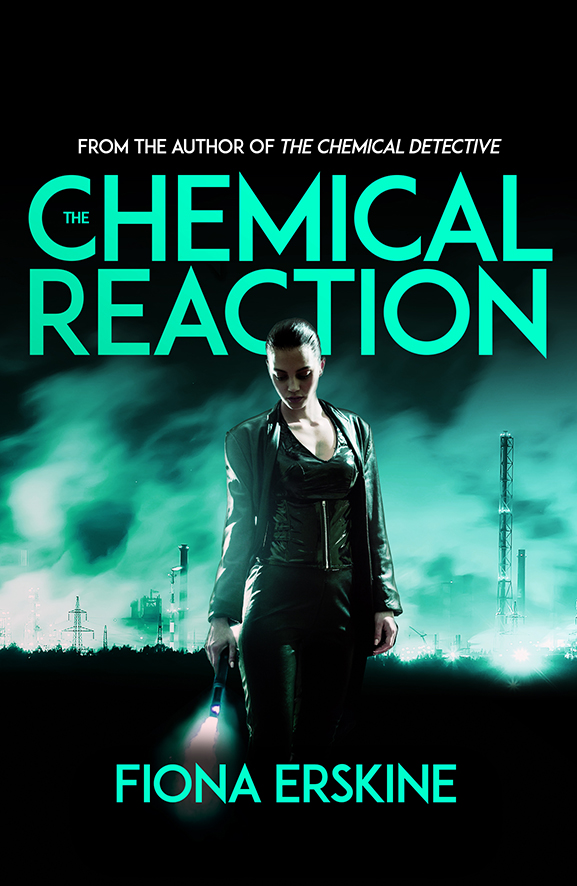 I don’t know about you, but I find modern thrillers so tedious and derivative that I can barely be bothered to read them, let alone review them. But every now and then something fresh and dynamic comes along, and when Fiona Erskine’s superb first Jaq Silver instalment The Chemical Detective hit our bookshops, there was a real sense of something that wasn’t going to follow the flock. In her protagonist we had a feisty, intelligent, three-dimensional heroine who was a chemical engineer and who blew things up for a living. The fact that Erskine is in real life a chemical engineer meant that her debut had a contextual depth of authentic detail that was so different from police procedurals and spy thrillers in which their authors do a bit of internet research, recycle clichés or simply make it up as they go along. Jaq Silver is the real deal and those in the know have been waiting impatiently for the follow-up. The good news is that The Chemical Reaction – a taut against-the-clock cliffhanging yarn located in China – is every bit as good as its Chernobyl predecessor, with trademark Erskine flourishes augmented by dodgy art auctions and disappearing chemical factories. There are going to be no plot spoilers here obviously, so I’ll confine myself to saying that if you’re looking for a really good thriller that is complex and exciting, get in on the Jaq Silver action now. You won’t be disappointed.