Ian originally planned this walk for the April issue, so the photographs he took were decidedly wintry. In mid-June Simon and I took our 5-year old grandson on this walk to update the photographs, so what you see here is a mix of the two. It is a fabulous walk which takes in the bays of Pwll Du, Brandy Cove, Caswell, Langland, Rotherslade, Limeslade, Bracelet and Swansea – places to stop and pick up refreshments are a bit thin on the ground at the start, so take a picnic. 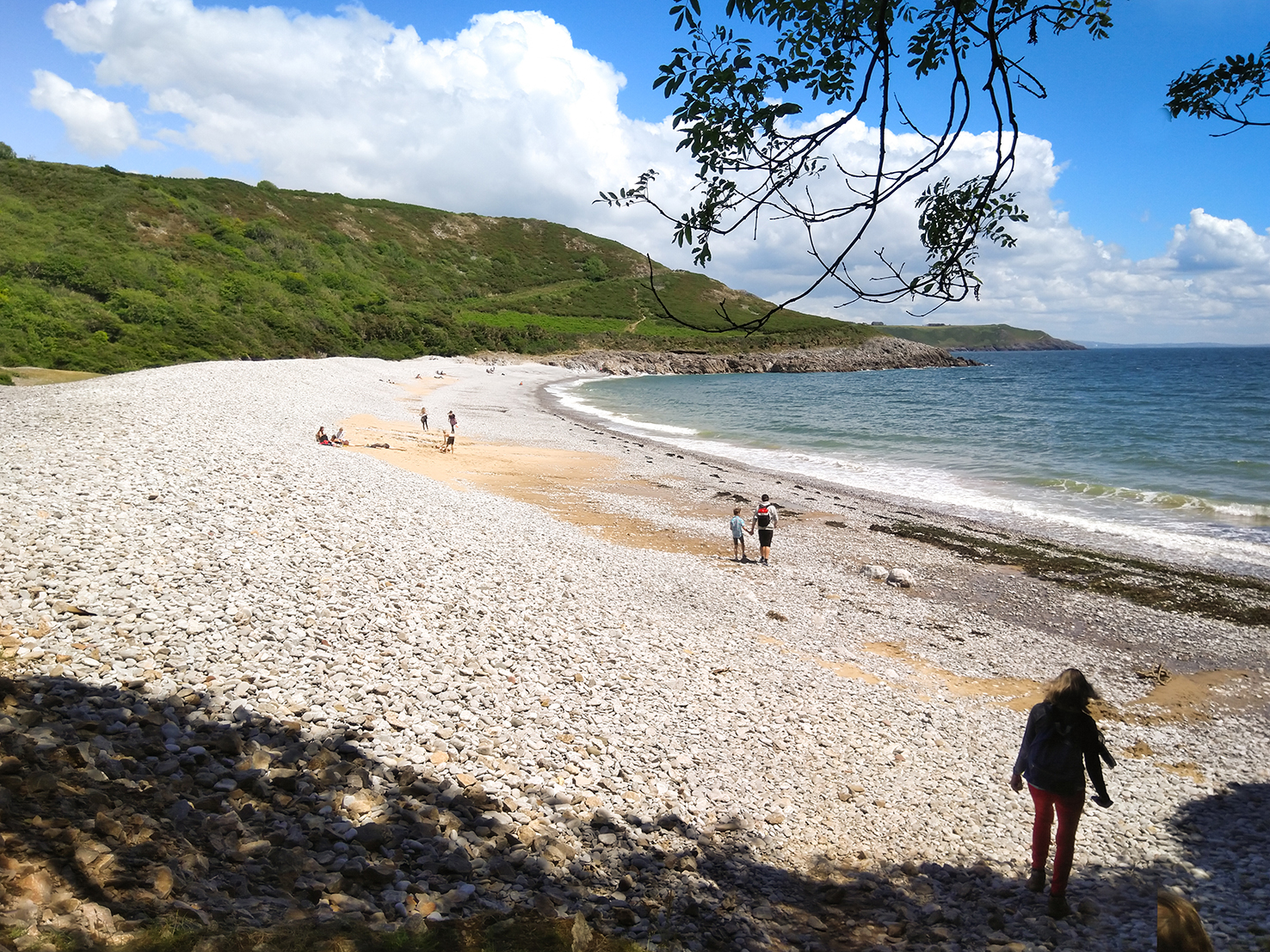 The view of Pwll Du Bay from the Bishopston Valley trail

Even if you can’t get out to do Ian’s walk this month, I highly recommend his carefully chosen playlist.

The original draft for this month’s walk was done about 9 weeks ago and reading it back now it’s almost beyond comprehension the extent to which our everyday lives have changed since then. The coronovirus storm clouds were certainly looming at the time but the extent to which it would soon affect us was almost unimaginable. Those pre- Zoom/furlough/self-isolating /social distancing/lockdown days seem a long time ago now. I sincerely hope you are all safe, well and coping with this awful situation we find ourselves in, as best you can.

For these uncertain times then, a nice healthy walk might well be a fine antidote now that the rules for exercising have been relaxed. Given that we can now drive 5 miles to exercise it gives us a perfect opportunity to sample the delights closer to home that we sometimes seem to take for granted. It’s a circular route, starting in Mumbles, or ‘the Village’ as it’s known locally, dahling, and takes in Caswell and Bishopston Valleys, the underrated but beautiful Pwll Du Bay and back along the coast path. There’s so much in the way of history, geology, flora and fauna in this area that I simply can’t do it justice here but there’s plenty of literature out there if you’re interested to learn more. 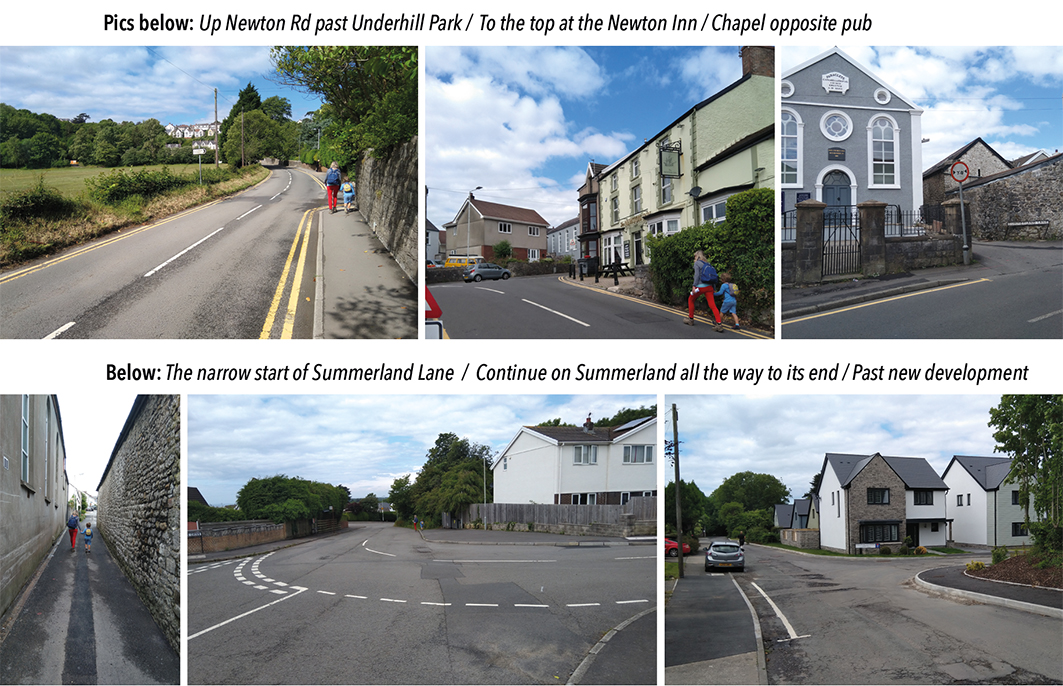 You can start anywhere along the route to suit but I chose Oystermouth and headed up Newton Road. Past Underhill Park, up the hill until you come to The Newton pub and head for Summerland Lane just across the road and next to the chapel. Follow the road straight on when it bears sharp left, keep straight on until it narrows and merges into a pathway just after the new housing development on your right. 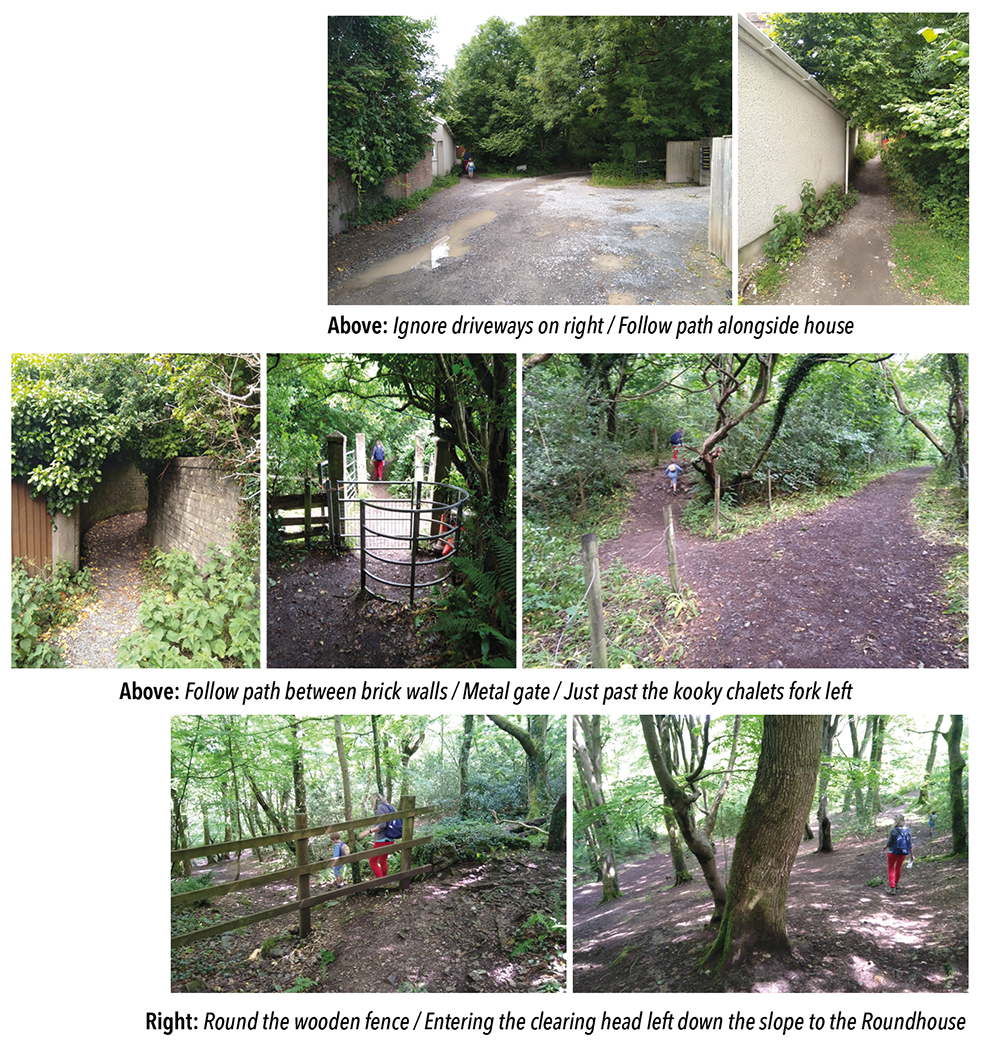 Take the narrow path straight ahead alongside a house and ignore the driveways to your right. You’ll then have a choice of two sign-posted paths and you go right between the brick walls, ignoring the path straight ahead with the metal gate. It turns sharp left after about 50 yards and then it takes you through a gate where it opens out into a clearing giving a view of Caswell Bay below to your left and Bishopswood Nature Reserve below and ahead.

Bear right and carry on for a hundred yards or so when you’ll come to a fork in the path bearing left and down the gentle slope pass-ing the small kooky chalets on your right as you do so. At the bottom fork left just after the last of the chalets. There is a marker with a red leaf symbol on it, continue on this track and you’ll come to a wooden fence, go through this and you’ll soon come to a clearing with a roundhouse down to your left which is part of the reserve and intended for use as an outdoor classroom and shelter – AND NOT AS A HANDY MEETING PLACE FOR YOU LOCAL TEENAGERS TO GO BOOZING AT NIGHT!! (If you wanted to shorten the route, go left here and into Caswell, taking the coast path back to Mumbles.) 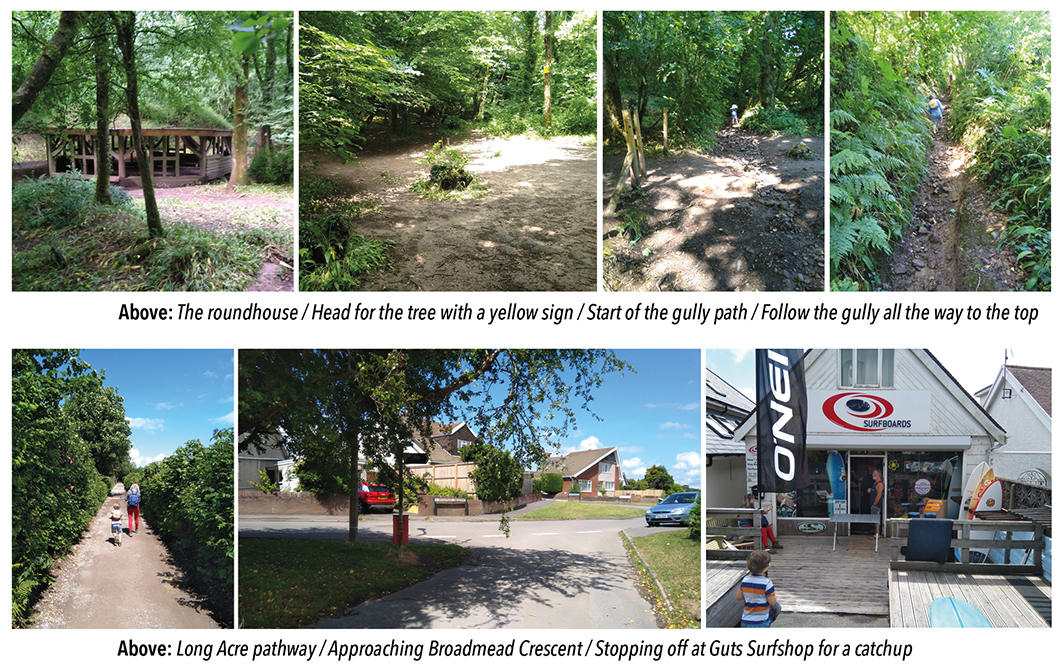 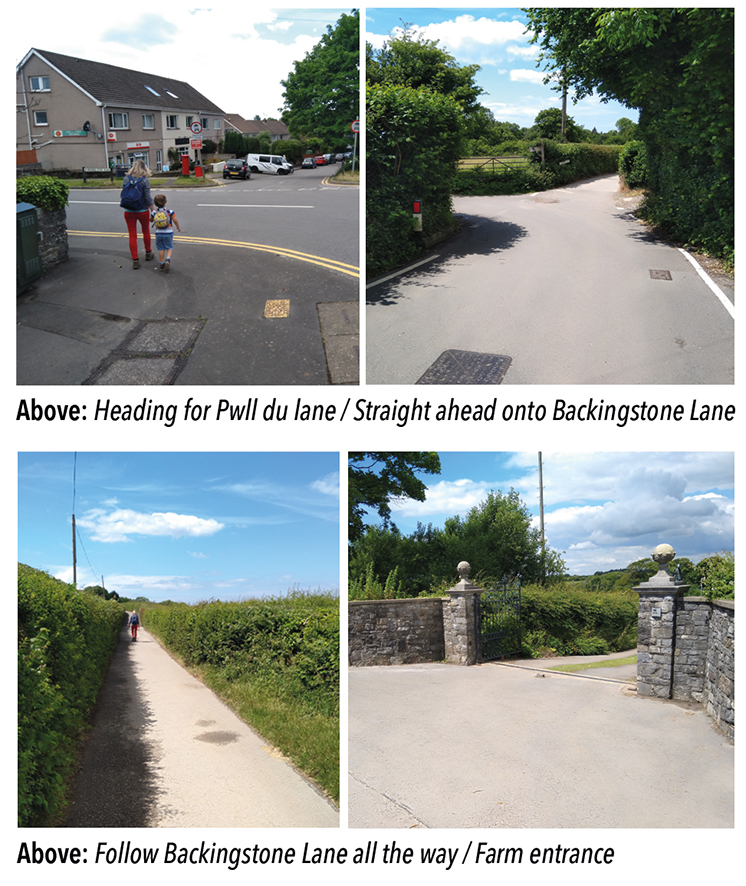 Keep straight on and look out for a path within a gully which ascends the hill. When you get to the top of the hill there’s a T junction where you turn right emerging onto Long Acre, and you’re now in Murton. Left onto Broadmead Crescent, right onto Killfield Road and then left onto Oldway towards Bishopston, passing Swansea’s finest surf shop on your left (Hi Guts!!). Head for Pwll Du Lane which is straight on where the main road bears sharp right. Pwll du lane itself will bear sharp left a little while along but you stay straight ahead and down Backingstone Lane. After a ⅓ mile or so look out for a signposted bridleway to the right, just after passing Backingstone Farm.

You are now approaching Bishopston Valley. Go through a gate, immediate right then immediate left and down the descending path to the valley floor below. When you reach the bottom your surroundings will be beautifully serene and peaceful with the steep wooded valley sides and birdsong creating a haven of tranquillity.

This lovely part of the peninsular belies its industrial past as it was busy with quarrying and mining back in the day. Geologically, it’s a fascinating place too. The gorge-like valley comprises of carboniferous limestone and is an interesting walk in itself with characteristic landforms all about, such as the odd cave here and there. Further upstream from where we join it, the river disappears underground into a subterranean channel, leaving a dry and empty river bed on the surface, only for it to re-emerge a few hundred yards downstream. For another day’s walk, perhaps.

Follow the path all the way to the beach keeping the river to your left all the while, savouring the beauty of this lush green valley as the stream lazily snakes its way to the sea. As you approach the beach, you will see two cottages and just before them a concrete bridge to which you’ll return. They seem to be holiday lets these days, but in a previous life they were famously pubs serving the quarrymen and miners of the area, with the last one closing in the 1940s. The beach here at Pwll Du is a gem and often overlooked in lists of Gower’s Greatest Hits. It’s remote and peaceful and when the tide is in, the blue sea against a backdrop of its lush green wooded surroundings gives it a distinctly Mediterranean feel. The storm beach – the high pebble ridge – is a remnant from its quarrying days when the surrounding cliffs were stripped for its limestone and the smaller rocks discarded. They were subsequently rounded and sorted by the action of the waves into the feature we see today. There’s nothing quite like it anywhere else on Gower. 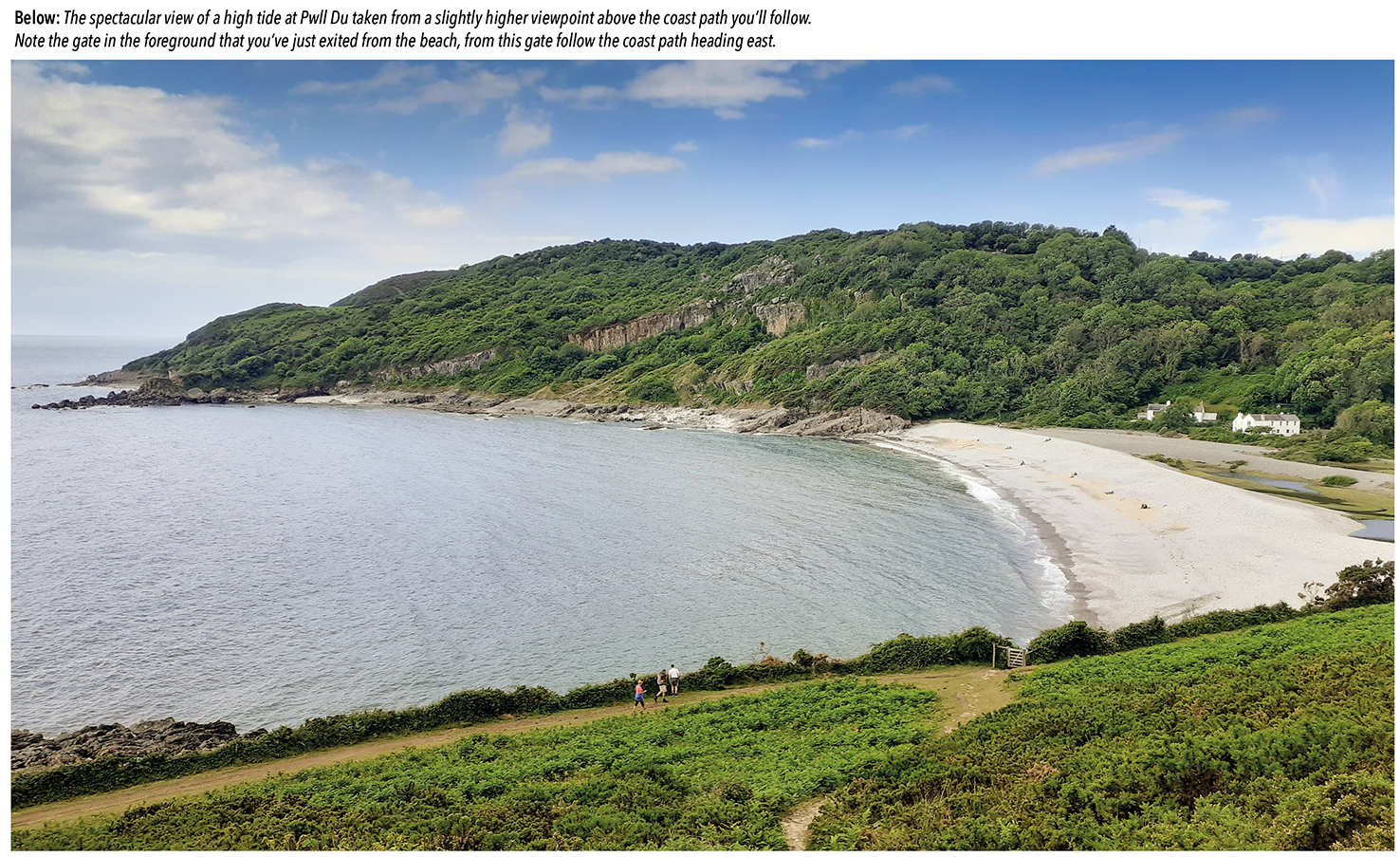 You can exit the beach at the opposite end, but it may involve wading through the stream as it joins the sea, and also a scramble over rocks up to the path. Or you can avoid this by retracing your steps back to the bridge, crossing it to your right and joining the coastal path as it ascends out of the bay. Follow the rough road up the hill until you see a path signposted to your right and keep to the lower path. This affords spectacular views of the bay. 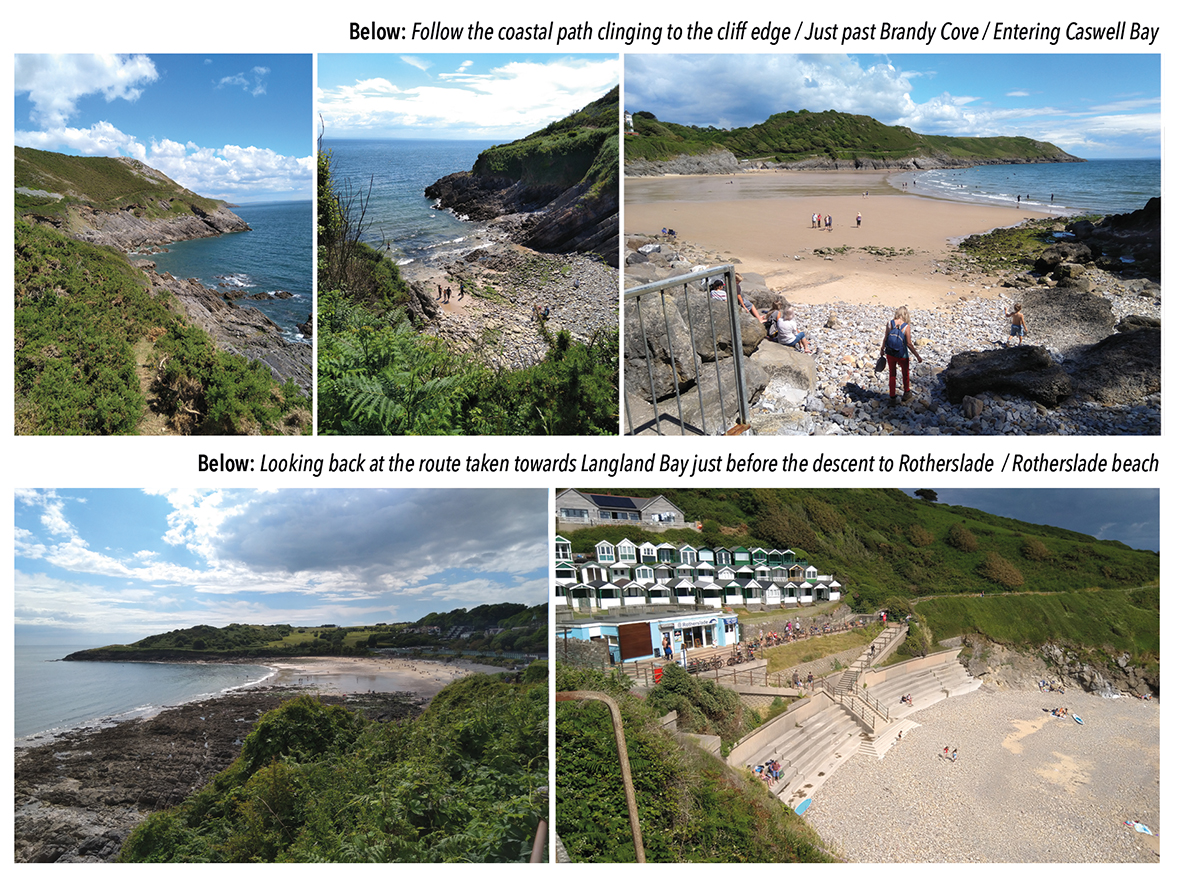 You’re now on the Coastal Path and the route from here to Mumbles is pretty easy to follow passing the beautiful bays, and indeed beautiful people, of Caswell and particularly La La (Lang)Land. Along the way the points of interest will be the secluded Brandy Cove, a narrow inlet previously used for quarrying and notoriously smuggling. It’s quite a steep and narrow valley, characteristic of several similar features on the south Gower coast. They were formed by the erosional powers of glacial meltwater at the end of the last ice age, which gouged the V shaped scars along weak fault lines in the limestone and were further eroded by the sea. Known locally as slades, they can be found at Mewslade and Slade itself amongst other places further west. 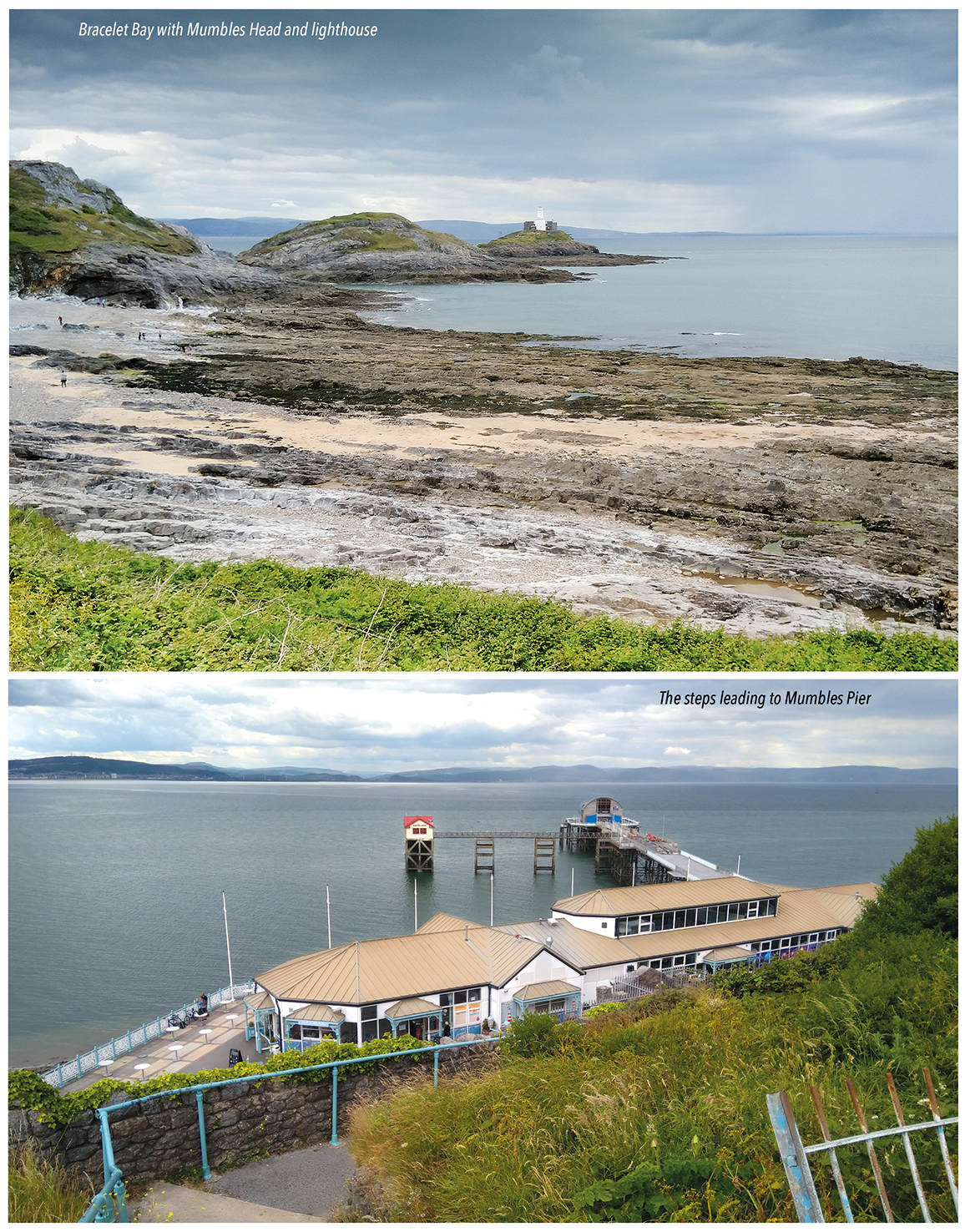 Mumbles obviously needs no introduction and in normal circumstances there’d be plenty of places to relax and enjoy a drink and a cake after your exertions. But as I write this, things are still on lockdown so let’s hope and pray that the situation changes for the better by the time you do the walk.

Ed: As we go to print, some of the rules are being relaxed and there are many places open for take-away only.

Start and Finish: Oystermouth or anywhere of your choice along the route.

Distance: 10 miles approx – can be shortened. Start and finish at Caswell for example