Much has been written in the press in recent weeks about ‘no shows’. I wrote on this subject in the March issue of Bay, when I said, “I was staggered to discover that this disgraceful lack of manners costs the UK £16 billion each year”. It would seem that three months of lock down hasn’t improved this ignorance. I find it hard to believe that if you have taken the time to book a table at a restaurant and find that you’re unable to go – no matter how late in the day – that you can’t be bothered to pick up the phone and tell them that you’re not going to make it. I heard an anecdote about a restaurateur who had a table of no-shows one evening so he waited until 3.00am and rang the person who had made the booking – “Are you coming for dinner tonight? Or can I let my staff go home now?” I’d loved to have seen the offenders face and hope that that was the last time they ever let someone down so badly.

Can you imagine being invited around to a friend’s house for dinner and then simply not turning up? No of course not – so why would you do it to a restaurant.

So how do you feel about paying a deposit when you book a table? A £10 deposit per head that is non-refundable unless you cancel the booking up to an agreed time in advance. It would certainly stop the practise of booking several restaurants and then deciding at the 11th hour which one you are going to honour with your presence, something I have been told happens amongst groups of friends.

The hospitality industry has taken a huge hit during this pandemic, and we need to get them back on their feet. Even restaurant critic Jay Rayner is taking a softer approach in his reviews, he said recently in The Guardian “I’ve decided that, for the foreseeable future, that there will be no negative reviews. If I come across a duff place, I’ll simply chalk it up to experience and move on to somewhere better”. This is exactly the stance I have taken since reviewing for Bay. I have no wish to damage a local business so have only ever commented on places that have given good food and excellent service.

I know I’ve said it many times before, but for the avoidance of doubt, all of our reviews are conducted independently. We have not been invited by the restaurant and we have definitely not been there as their guests. We, just like you and every other reader, have paid for our food and drink. 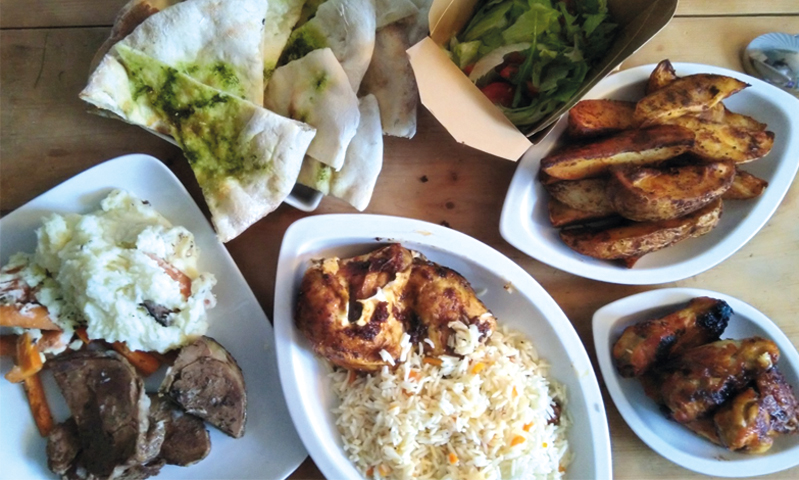 Eating in is the new eating out it seems, with very few restaurants actually open for the business of serving customers in-situ they are now concentrating on developing their take-away menus. One of these is Brewstone in Uplands. With their wood fired pizza oven, Brewstone has for a long time been my go to restaurant for a thin and crispy pizza. To my knowledge, they are the only place to get a pizza without tomato sauce. Their Cymru am byth pizza comes with a cheesy Alfredo based sauce topped with leeks and smoky bacon – quite the winning combination.

Brewstone has adapted their normal menu for takeaway and have made some great additions, which include long slow cooked cuts of meat such as brisket and lamb.

Lamb with mash, roasted vegetables and minted gravy was exactly what I needed. The lamb had been cooked until it was meltingly tender, and the mash was soft and buttery, the carrots had been roasted in the wood fired oven and had a gentle smokiness.

As this was a family meal for four we feasted on Frango Chicken – Brewstone’s take on the Portuguese chicken peri peri. This was half a spatch-cocked bird which had been marinated in spices and chilli peppers. The flesh was moist and succulent while the skin was charred and crisp – the perfect combination. This came with carrot rice – which was a bit of a revelation – it’s an unlikely pairing but surprisingly good.

Brewstone offer a delivery service or you can pick up from the restaurant – we had it delivered and were surprised at just how quickly it arrived. From ordering to delivery was less than an hour – proper slow cooked fast food.

Last month I heard from Michele and Jacques at the Pant-y-Gwydr that they were launching a French and Vegan Food at Home menu. We have eaten at this lovely restaurant many times in the past few years, and the idea of being able to pick up something special to share with friends in an al fresco supper was very appealing. All I had to do was make my selection from the on-line menu, email my order and pay over the phone. At a pre-arranged time, we met outside the restaurant where Michele was ready to place the food in the boot of the car.

To call this meal a take-away is like calling the Mona Lisa a painting. Yes, technically it is, but in reality, it is something so very special.

Firstly, the packaging is perfect. Each dish comes in a sturdy, recyclable brown cardboard bowl, any extra sauce is in an accompanying little pot which is then in its own brown paper carrier bag. So, each person can see exactly what comes with each dish. A type written ‘menu’ lists each dish and its accompaniments so there can be no confusion as to what goes with what.

The late great Sarla Langdon always said – never enthuse when doing a review – simply state the facts. Well I’m afraid it will be hard not to here as this was a take-away like no other. The starters of Burgundy snails were, I am told, fabulous as was the mushroom pave. In normal circumstances I would have been diving in with my fork to taste for myself, but in this Covid-19 socially distancing world, we are not allowed to share food, so I will just have to take their word for it. However, I did manage a spoonful of the fish soup with its rouille and croutons as well as, my own vegan rainbow layer cake, that was not only quite beautiful with its elegant layers of mushroom, potato, carrot and spinach with tarragon and chives, but it also had far more flavour than I could have imagined. The mushroom layer was deeply savoury – almost meaty in flavour – not at all what I was expecting from a vegan dish.

Again, with the main courses I can only report on the guinea fowl with green peppercorn sauce – which was wonderfully rich and a very generous portion, and my own couscous Royale which had a north African influence with its flavours of harissa and fennel. Mine was the meaty version with chunks of chicken, very tender lamb and a spicy merguez sausage, but there was a vegan option too.

Every take-away has to include chips – and here as you’d expect they were thrice cooked and extremely moreish. Fortunately, I had ordered two portions otherwise I think there might have been a fight. These were the best – golden and crunchy on the outside and soft and fluffy on the inside, and because they had been packed in a rigid cardboard container, they had not had the opportunity to steam and go soggy. I wished I had ordered more.

Our desserts were so pretty. The tarte tatin with homemade vanilla icecream was rich and caramelly, while the strawberry charlotte with its layer of sponge was as light as a feather. Tiramisu translates from the Italian as pick me up or cheer me up and this one certainly did as it was not sweet and cloying as some creamy desserts can be, but delicate with just the right level of chocolate and coffee flavour.

This really was fine dining, with restaurant quality food at home.

All the starters and desserts were £5 each and the main courses average at £15, so for a 3 course meal you are looking at £25 per head – what amazing value for money.

Vegan diners will be in for a treat too, as Jacques has created some of the most fabulous plant based dishes – vegans are definitely not excluded here.

The Pant-y-Gwydr is open this month and will be taking part in the government funded scheme of Eat Out to Help Out.