This month Liz ponders on life after lockdown, and her fantasies of being a pirate or a cowboy. 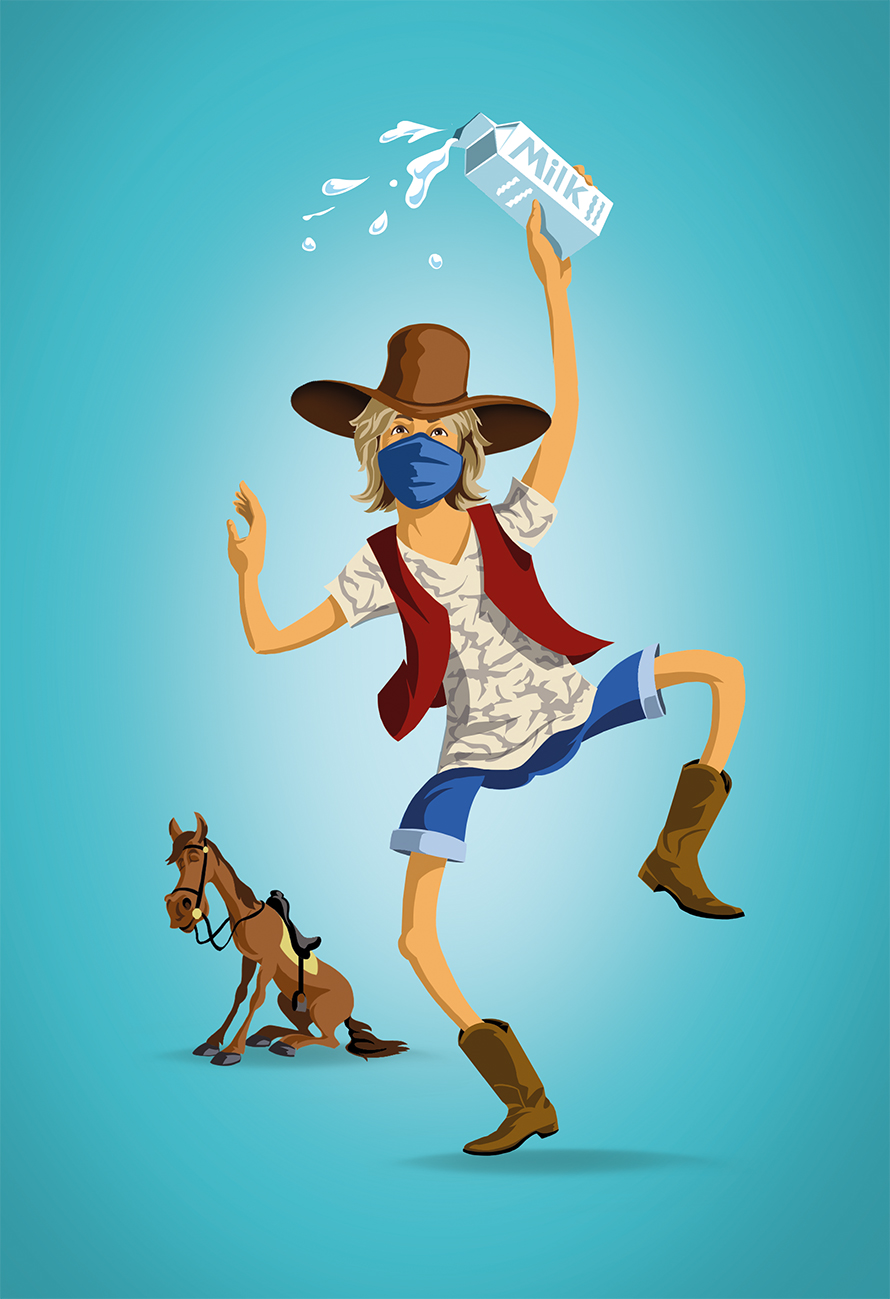 In the course of one dog walk Husband managed to compare me to both a pot-bellied pig and a smelly old woman. Ignoring – for now – Husband’s rudeness/constructive criticism, I have to wonder if this is going to be my new normality? Overweight and pungent?

I admit I do have a tendency to graze during the day. Going into the kitchen without grabbing something to eat while I’m there seems like a wasted opportunity. And I have adopted the will-it-last-another-day? sniff when dressing. Maybe lockdown fatigue is hitting me harder than I realised.

Remember back at the beginning? There was a sudden outpouring of love and helpfulness, of community spirit. The innate goodness of people shone through at a time when society in general had seemed to be rushing headlong towards a ‘Me first, second, and always’ attitude.

Then people who could sew were sewing: masks, headbands, even scrubs – because not enough protective wear was provided although NHS staff did get a jolly good round of applause to make up for it – and others did what they could.

The Council, various agencies, including Zac’s, and businesses worked hard to ensure the most vulnerable in the street community were kept fed.  Thanks to a huge number of volunteers from all across the city a hot meal was delivered daily to everyone who wanted one.

Meanwhile in West Cross, Ruth Cronin, recycler extraordinaire, finding that flour had become harder to find than a hen with teeth, turned herself – and her home – into a one-woman flour shop, making a lot of home bakers very happy, while raising money – at last count more than £1,000 – for Red Café FoodBank in the process.

A wonderful sort of new normality.

Now we are very slowly coming out of lockdown.  For Husband and me that means visits to the doctor, the dentist (both Husband) and the vet (me). We haven’t forgotten how to enjoy ourselves.

But as we emerge it’s a different side of society we’re seeing in the media. The good people are still doing what they’ve always done, but now the attention is focusing on the others, and where the attention is so are the excuses. What’s the point of me doing it right when no-one else is?

I heard a lovely interview with Tom Hanks – could there be anything else with the marvellous Mr Hanks – in which he reflected on the kind of people who refuse to abide by the rules, the lack of common sense.

In the sermon on the mount Jesus says, ‘So in everything do to others what you would have them do to you.’ In other words, you don’t want others to give you the virus, so try not to give it to them. Wash your hands, keep your distance, and, controversially, wear a mask.

I’ve seen enough hospital dramas to know that, in an operating theatre, everyone wears a mask, and I’m fairly certain they weren’t invented because a surgeon once upon a time had really bad breath. And it seems logical to me that a layer between me and all those nasty little viruses must make it hard-er for them to break in.  So that’s why I wear one. In fact, I may never leave home again without one.

But what nobody mentions is the fun you can have with a mask. I have a rather lovely mask made by Daughter, and, when wearing it, I tend to affect a cowboy drawl as I swagger bow-legged along the street to the chemist’s. ‘Get off your horse and drink your milk,’ as John Wayne might have said. (Oh dear, I’m saying it out loud now and it sounds less wild west and more east Irish.)

Other days I pretend to be a mobster or bank robber, depending on my mood, with the occasional ‘All aboard, me hearties’, for good measure. It’s these little things that keep me sane.

But my sanity apart – and don’t get Husband started on that – the world took a turn for the better during lockdown in all sorts of ways. That was when talk of a new normality sprang up, suggesting a permanent change to the way society lives. Wouldn’t it be wonderful if the economy could be revived but with a new less polluting way of working, for example? But with what we’ve seen so far as lockdown lifts a huge turnabout seems unlikely.

It seems likely the selfish will go on doing their own thing, but we don’t have to. George Ezra sings, ‘What a terrible time to be alive if you’re prone to overthinking it.’ Let’s not overthink it. Let’s just do it. Invent and adapt to the new normality this world and society needs.

Now, excuse me, I hear the cheese saying I’m needed in the kitchen.